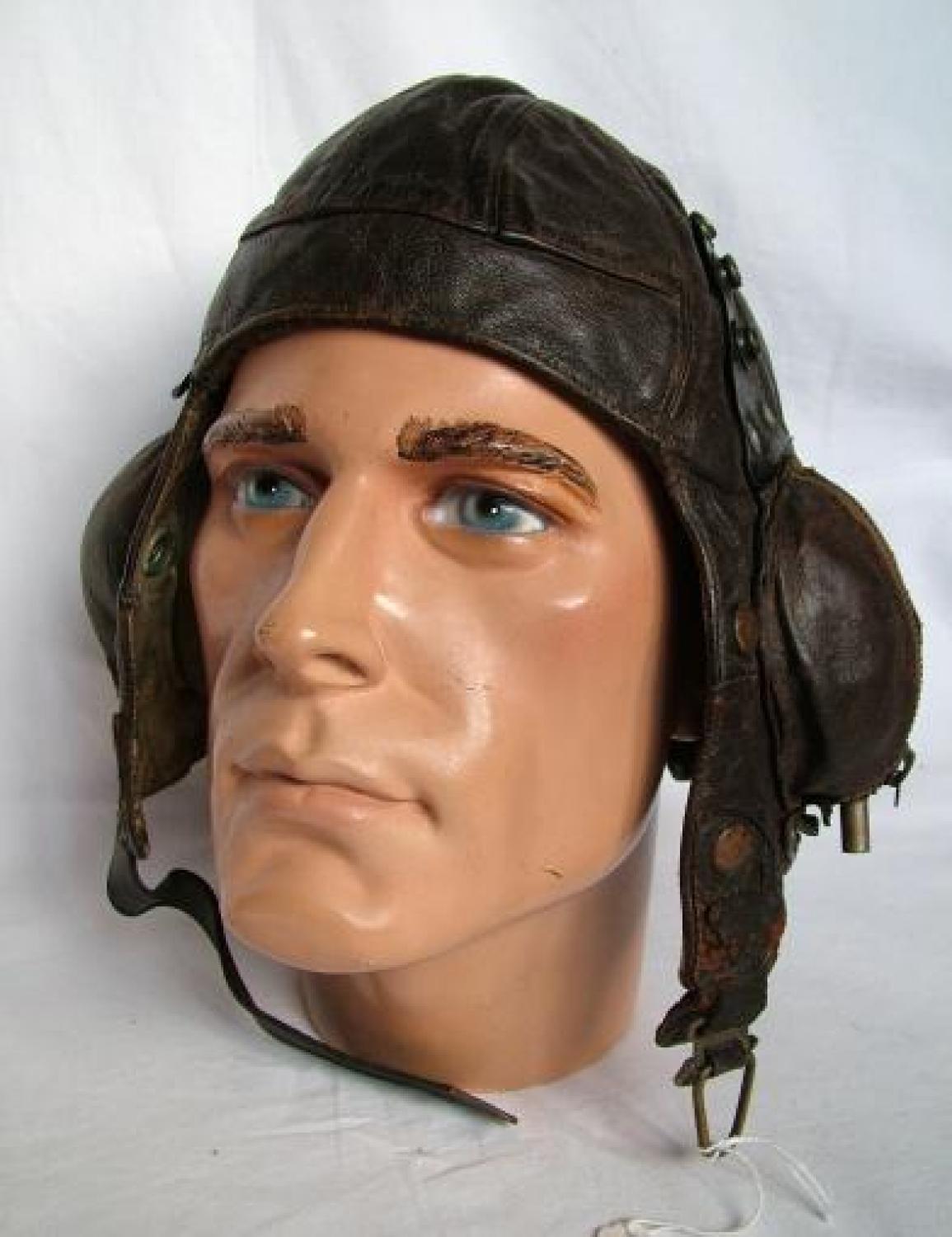 SOLD
By Frank Bryan. Size 2 (6, 7/8 - 7). 1941 dated. The overall appearance is only fair to reasonable. The leather is a little dry and has some surface abrasion and cracking in areas, the worst of which are photographed. The zipped earpieces are sound bar some minor re-stitching and the lower part of the right earpiece zip that requires a few stitches. Both zips remain in working order. The helmet retains both bakelite receiver carriers which are currently housing Air Ministry marked bakelite Gosport earpieces (6F/154). The chinstrap is good and complete with the metal end piece. Unfortunately the Bennett buckle lacks any leather covering and the chin tab at that point is rather worn. The backstraps and rear Bennett buckle are quite good. This helmet is fitted with plates for the MK.IV series goggles. These are riveted above and below each earpiece and were used in conjunction with small press studs fitted to the large 'spring' loops of the MK.IV series goggle strap. Technically the plates were intended for use with the Mk.IVA only but was also used with the Mk.IV & IVB in practice. The helmet's chamois lining has quite heavy soiling but remains sound. It is labelled with the manufacturer's details, date and is also named to the owner 'Dimmock' from whom we purchase this a few years ago. Acting Squadron Leader Peter Dimmock joined up in 1939 wanting to be a fighter pilot and initially flew long and short nosed Blenheims before bursting an eardrum on a training flight. He was eventually allowed to return to flying as an elementary instructor and also did a short spell at Cambridge flying a Mosquito testing the newly installed radar. He also did some part time instructing at Panshanger and Biggin Hill and was later sent to the Air Ministry Directorate of Flying Training and had an Anson for personal use at Gatwick for vip's. Dimmock left the RAF in 1946 and joined the BBC, later becoming the first presenter of the well known sports programmed 'Grandstand.' The helmet is offered unwired. Wiring, receivers, microphones and jackplugs can be supplied at extra cost if required. Quite worn and a in need of some attention but displays well and relatively unusual to find with the helmet plates fitted. Stock code H16394.