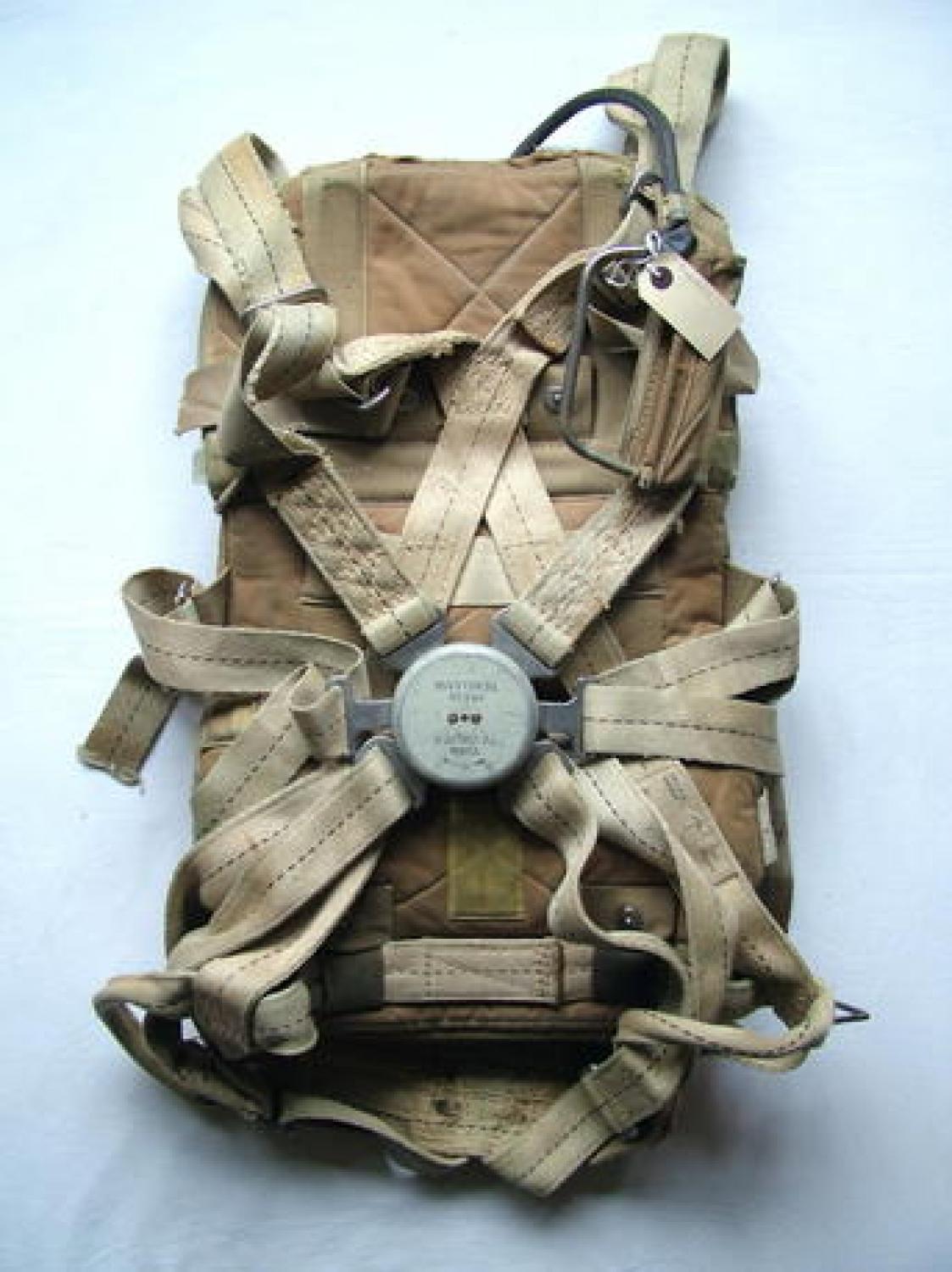 SOLD
Stores Ref. 15A/512. 'Parachute, Single-point, Quick-release, Back type pack'. Intended for use by all members of an aircrew in Lancaster and Halifax heavy bombers. It consists of a harness of medium webbing similar to the 'Observer' or 'Seat-type'. The pack is attached to the harness and is carried on the back, acting as a cushion when the wearer is seated. The main difference in construction between this and 'Observer' and ' Seat-types' is the larger quick release box with six connectors instead of the usual four and a slightly different strap arrangement. The rip-cord passes over the left shoulder, and the handle and pocket are carried by a sleeve on the left hand chest strap. Being somewhat cumbersome these parachutes were less popular than than the 'Observer/Chest' types and were thus produced in relatively small numbers and are now extremely rare to find. A wartime period photograph is shown in Mick Prodger's excellent book on flying equipment of WW2 - presumably as a contemporary example could not be found. The webbing is in good order although a bit soiled and with some fraying at the edges. It is labelled 'Type B5 Harness, Ref. 15A/512' and has broad arrow and A.I.D markings. The pack is in the usual sand coloured cotton canvas and is in very good used condition. The fabric is a little soiled and one of the two horizontal metal 'formers' is protruding from the end of it's sleeve - not detrimental and easily fixed if desired. The long, zipped flap that covers the rip cord is excellent as is the rip-cord channel tube. The pack has a large fabric label with broad arrow and 'Parachute Back Type (B5), Stores Reference No. 15A/512'. There is also a serial number andand AID mark but no date. The pack is complete with full canopy/rigging lines, drogue 'chute, rip-cord and handle that appears to have remained unopened for years. The bungee elastics on the pack are rather stretched. Overall this is a good '+'/very good used example of an extremely rare parachute. This one is only for sale following an upgrade in my own collection. Stock code M14379.