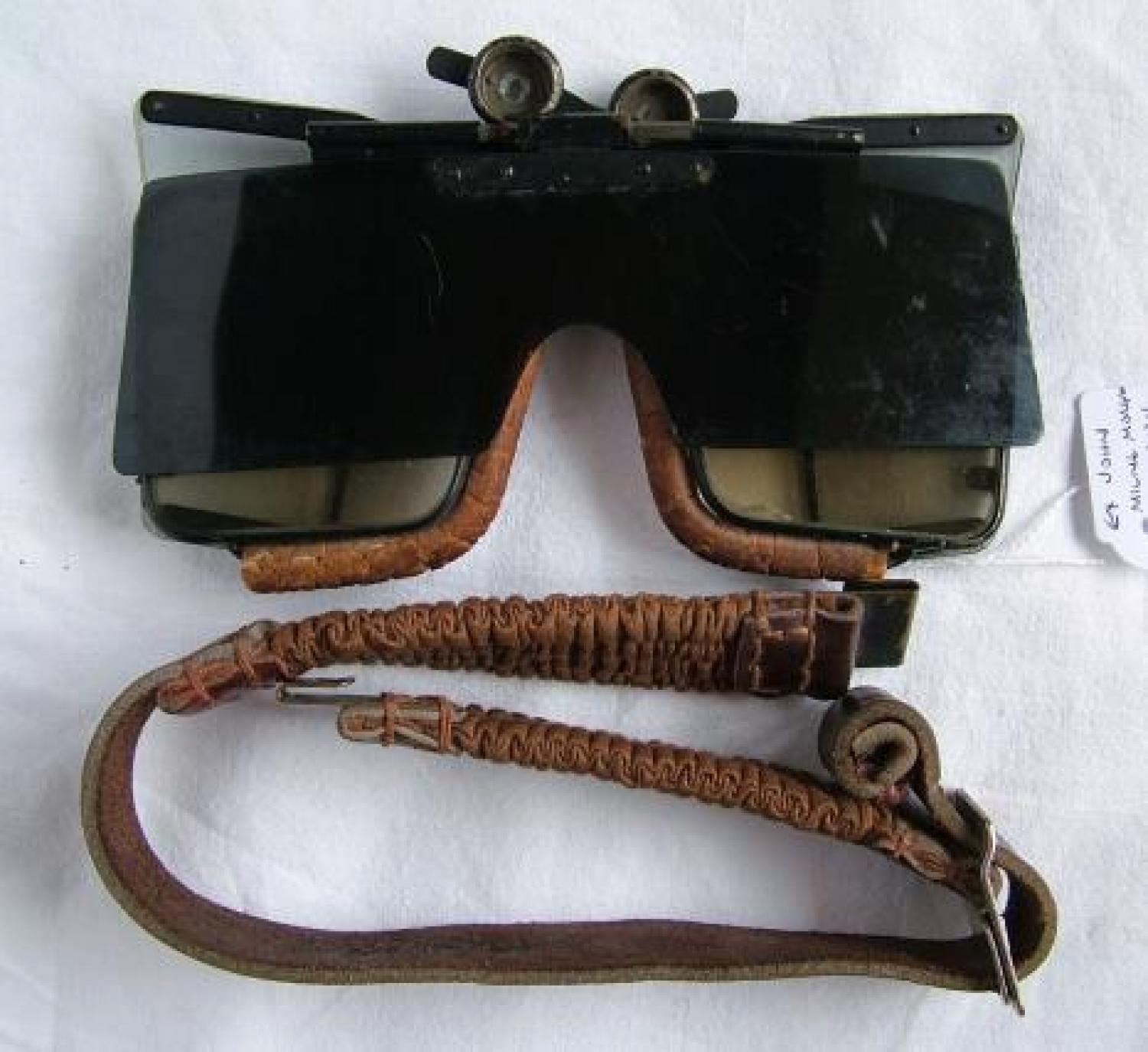 SOLD
Stores Ref. 22c/156. Fragile lightweight wire frames with laminated glass lenses, celluloid side-shields, rolled sponge rubber noserest and anti-glare screen (flipshield). Fitted with short side-arms each having a female press-stud at the end. The frame is in very good condition overall with only minor paint chipping. Unusually the tinted lenses in this pair are quite good. They do have delamination marking but much less than normally found. Likewise, the sideshields are a little warped but much better than usual. The rubber nose-roll is a bit discoloured slightly perished but remains complete and has flexibility. Light scratches on the flipshield. These would have been attached to a flying helmet via small press studded plates sewn in place at the temple (not present) or using a leather and sprung strap. This pair come with the 'optional' leather strap that could be clipped onto the frame enabling them to be worn like a standard pair of goggles. This is is in excellent overall condition and is nicely Air Ministry stamped. This particular pair belonged to John Milne Morgan who was commissioned in the RAF in July 1937. Details of his early career are unknown but he was serving with 238 Squadron flying Hurricanes in the Western Desert as a Pilot Officer in October 1941. On 23rd November he damaged two Ju87s, and early in 1942 was posted to 92 Squadron as flight commander initially on Hurricanes, later on Spitfires. He saw considerable action with this unit shooting down a Ju87 and damaging a second on the 4th July. From then until the end of his tour he met only BF 109s, destroying one on the 27th and damaging another a month later. On 2nd September he shot one down and damaged two more, and claimed another on the 26th. He probably destroyed one on the 9th October, and on the 22nd destroyed another, being awarded a DFC. The citation reads 'Flight Lieut. Morgan has shown great courage and considerable skill as a leader both of a flight and of the squadrin. He has personally destroyed five enemy aircraft and has materially assisted in the successes achieved by the squadron. Flight Lieut. Morgan has at all times set a splendid example by his courage and devotion to duty.' Morgan claimed another 109 on the 29th October, with another damaged on the 8th December - around the time that he was promoted to command the squadron. On 7th January 1943 he shot down is sixth Bf 109 bringing his total score to 7, and also damaging another one. His tour ended soon after, and he received a Bar to his DFC. He began a second tour in October 1943 with 274 Squadron, leading the unit on ground attack missions over Italy in support of the 8th Army. His aircraft was hit by ground fire whilst strafing near Termoli and began to stream glycol. Morgan had to bale out of his stricken aircraft and finished his wartime service as a PoW. John Milne Morgan ended the war with a total of 7 a/c destroyed and 1 shared destroyed, 1 shared probable and 8 damaged making him an 'Ace' . The goggles come with photocopies of letters from the Air Council and Society For The Protection Of Life From Fire dated March/Aug 1939 relating to his gallantry and perseverance displayed in attempting to rescue another pilot following an aircraft accident at Bletchley. In addition there are photocopies of his hand written diary for the period 5th - 16th Nov. 1942 (18p). Extremely rare goggles in very good condition and excellent history with them. Originally purchased from the veteran by Michael Young who many will recognise as 'the' main source of high quality RAF kit sourced from veterans in the 1960s, 70s, 80s and early 90s. Morgan's B-type flying helmet will also be listed for sale during todays update. Stock code G19227.