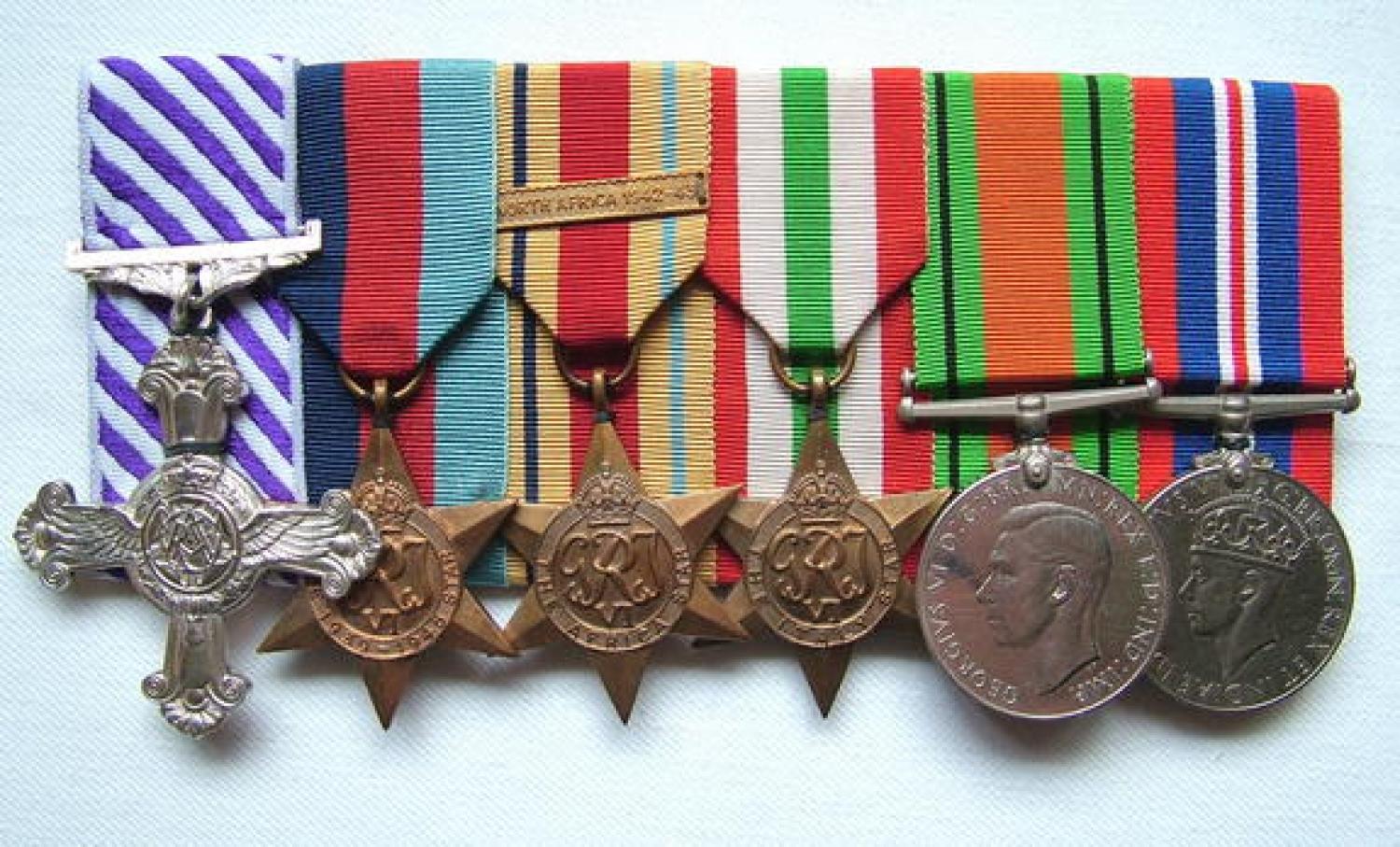 SOLD
Fine medal group to Warrant Officer James Pettey (1539605), RAFVR, 500 Squadron, Mediterranean Allied AIr Force. Comprises Distinguished Flying Cross (dated to rear), 1939 - 1945 star, Africa star with 1942 - 1943 North Africa bar, Italy star, Defence and War medals - all professionally mounted. The group also comes with the card medal box , one of his Warrant Officer sleeve titles and some research material. The latter includes copies of the recommendation for the DFC; notification of the award in the London Gazette and pages from the 500 Squadron Operations Record Book (ORB). Pettey received the DFC whilst serving with 500 Sqdrn, Desert Air Force, M.A.A.F. On 26th January 1945 his Commanding Officer wrote 'Warrant Officer Pettey, who is PO Douglas' navigator, has completed an unusually long and arduous tour of operations, having taken part in 78 daylight bombing raids during a period of over a year. He has attacked a large variety of targets including strongly opposed close support operations throughout the advance through Italy from Cassino to the Gothic Line, and raids on heavily defended enemy communications. He is an exceptional bomb-aimer, whose enthusiasm for operations and devotion to duty have been an outstanding example to other observers in the Squadron. These qualities, together with his resolve in adverse bombing weather, and cool, calm efficiency over strongly defended targets, have brought him and his crew outstanding results. As leading bomb-aimer, he has an unbeaten record of bombing accuracy in the Squadron, a just tribute to this W.O.s determination on every sortie he has undertaken'. The Air Vice Marshall Commanding the DAF group recommended an immediate DFC but the Commander in Chief overuled, recommending an non-immediate award. The award was approved by the King on 9th April 1945 and appears in the London Gazette dated 20th April 1945.
Strangely, Pettey does not appear in the 500 Sqdrn. ORBs pre Dec. 1944 but these do show that the squadron changed aircraft (from Hudsons to Baltimores), and presumably personnel, although there is no indication where the replacement crews arrived from. However, the ORB does state that Pettey was posted from the unit in January 1945. One must assume that Pettey did not carry out all 78 Ops with 500 Sqdrn. - It is not uncommon for an airman recommended for an award to have completed only some of his tour with with the squadron with which he received the award. This grouping certainly deserves further and more intense research to unlock the secrets of WO Pettey's operational sorties. Payment by cheque or direct bank transfer only on this item please. No paypal.