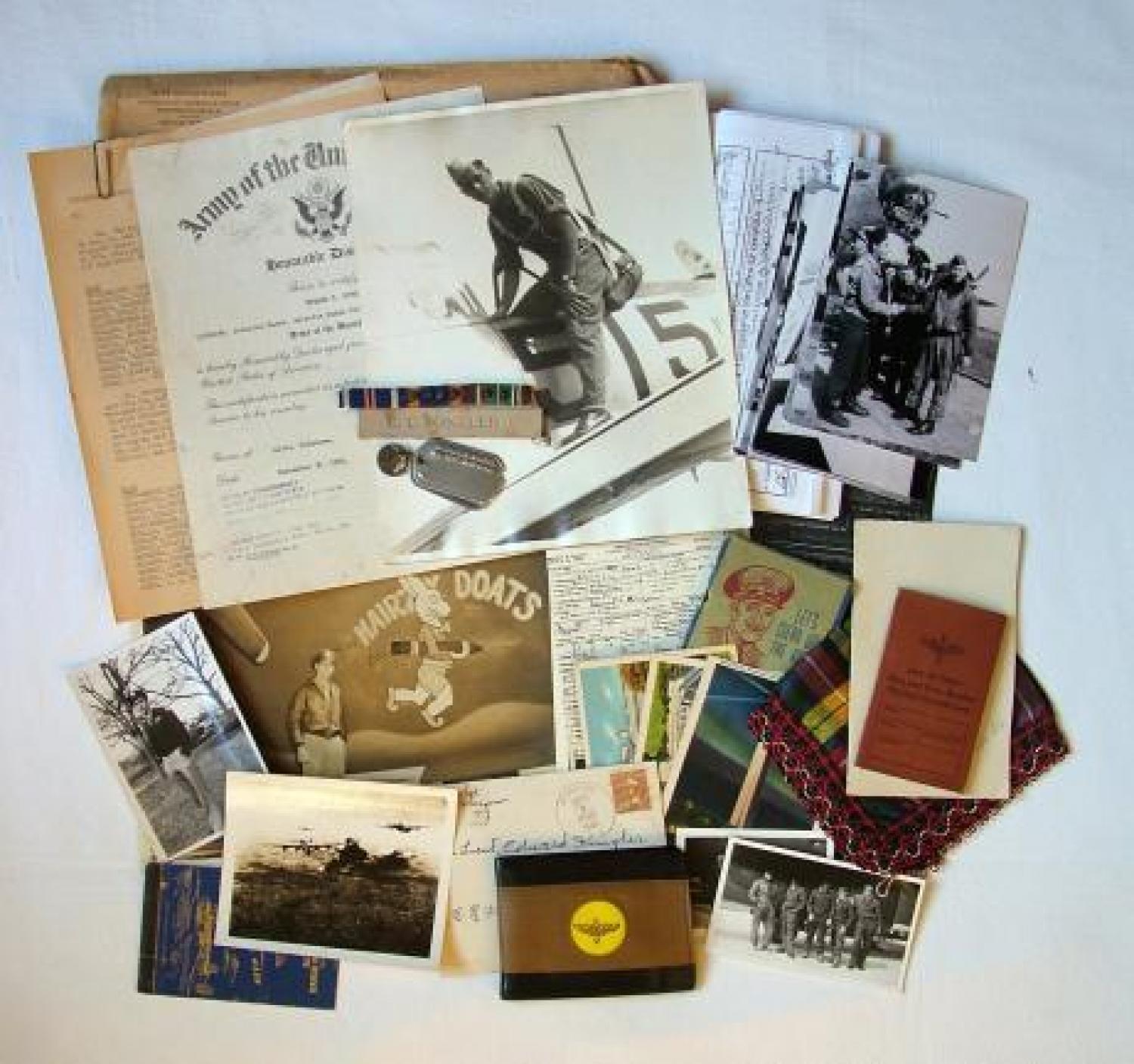 SOLD
This listing comprises various items of paperwork, photographs and records etc relating to a B-17 / B-24 pilot with the 490th Bomb Group (Heavy), 848th Bomb Squadron (H). 1st Lieutenant Edward C. Kinzler was born on January 29th 1922 in Philadelphia, Pennsylvania, USA. He enlisted on June 23rd 1942. His basic training was completed at Coffeyville, Kansas and Advanced Flying School, Altus Field in Oklahoma as a 2nd Lieutenant. Temporary promotion was granted to 1st Lieutenant in April 1944. He arrived in Britain on 5th May 1944 as a B-24 pilot flying from R.A.F. Eye (AAF Station 134) near Stowmarket, Suffolk. He flew 22 operational flights (combat missions) on B-24s and a further 13 after changing to B-17s in August 1944. Targets included Hemmingstedt, Frankfurt, Nurenberg, Arnhem, Ludwigshafen, Munster, Berlin and Cologne. He also flew training missions whilst with the 8th. Kinzler left England in November, arriving back in the USA on 28th November 1944. For his service flying missions in the European Theatre of Operations (ETO) flying missions over Normandy, Northern France and Germany he was awarded the Distinguished Flying Cross, Air Medal with 4 oak leaf clusters and the ETO medal. He was relieved from active service on June 3rd 1945. Having survived a tour of operational flying he was killed in 1947 in a cruel twist of fate during a crop dusting flight. Included are his original aviation cadet honorable discharge certificate dated October 1943 - this also has his enlisted record on the back; an original AAF sheet indicating his sompletion of training at Altus Field dated Septe. 1943; an original document regarding his temporary promotion to 1st Lieutenant dated April 1944; his original physical record card dated 1942/3; 3 original postcards sent to him c.1938 (Washington Monument, White House, US Capitol); a graduation card sent to him in 1943 by his aunt and uncle (in the original envelope); large original 10 x 8" photo of him climbing into a Harvard (?); superb original 10 x 8" photo of him standing by the nose of B-24 'Mairzy Doats' - he is wearing an A-2 & visor cap; two small original 3 x 2"/4 x 2" photos of him with some of his crew - one marked to rear 'July 1944 England'; an original 5 x 4" air to air photo of Liberators (grainy); original 3 x 5" photo of him wearing full Scottish dress - in card sleeve marked 'Victory Studio Ltd.' - presumably taken on a trip to Scotland.; original 3 x 5" photo of him in his pinks, 'Ike' jacket and visor cap back in the USA, dated 1946. In addition there are approx. 20 modern reprints of photos of him and his friends, mainly taken in England. There is a small Stewart tartan hankie embroidered 'Bonnie Scotland' ; a small plastic AAF wallet; a card packet of 'lather leaves' soap; photocopies of his certificate of service & separation and three photocopies of his flight record log noting various combat missions. There is a period photocopy of his certificate of service dated June 1945 (certificate of service to rear) and a period photocopy of his death certificate. Finally there is an embossed leather flying jacket name tag (unused) and his dog-tags dated 1943. The latter with some form of lucky charm attached. The whole lot is contained in a War Department envelope addressed to him.
Please check out our other listings for items belonging to Kinzler. Stock code P18665.