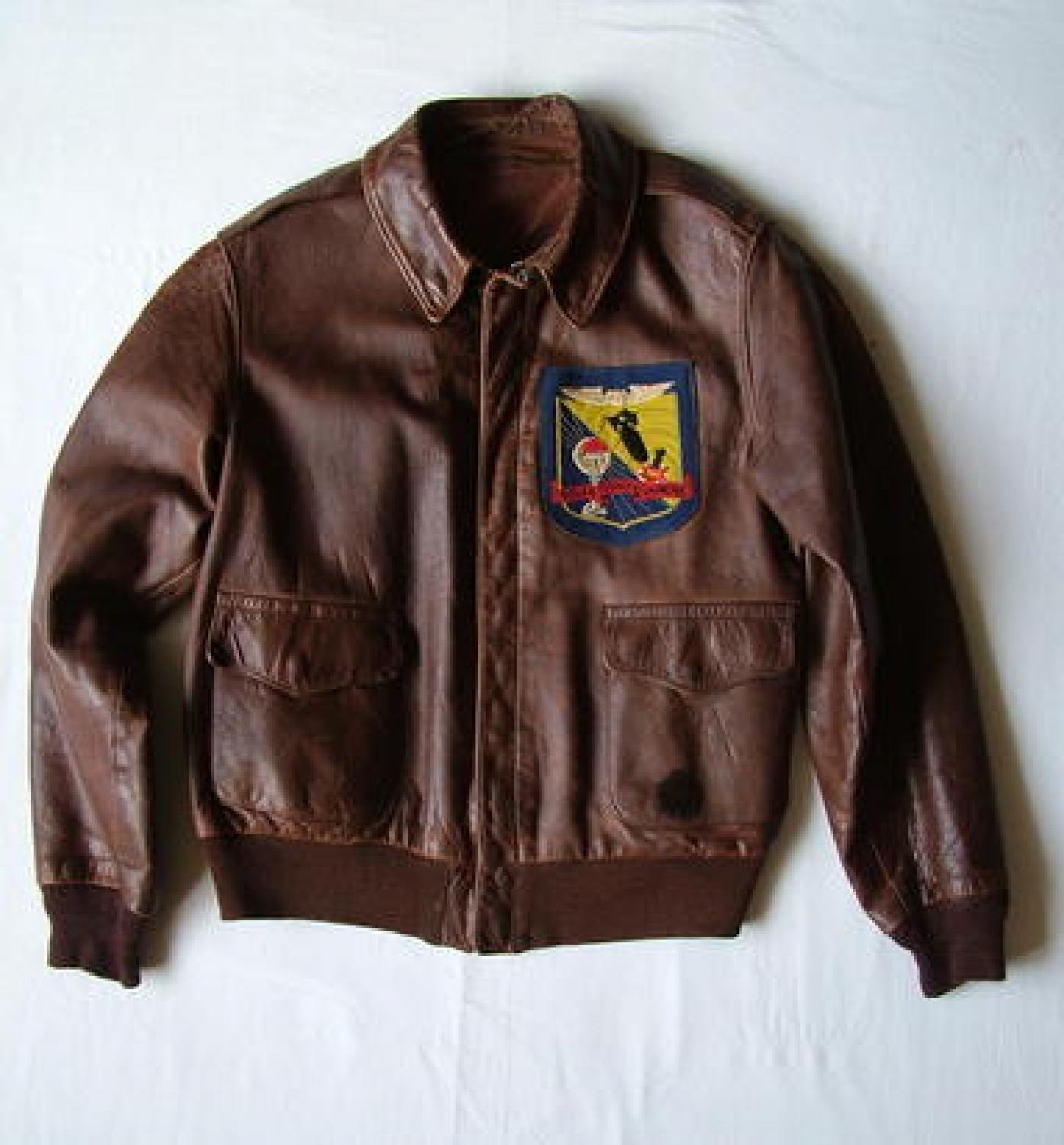 SOLD
Marked as a size 40M. Physically measures 42" so should be a comfortable fit for a 38" or a snug 40". Mid tan leather with matching cotton lining. The leather is generally excellent with no rips, tears or repairs, showing just normal wear. There is a small dark spot on the left pocket (see photo) - possibly an ink stain? Complete with all the usual A-2 features including the collar snaps and hook, leather hanger, underarm vents and original 'Crown' zip. The main label is long gone but it retains the small pocket label marked 'RW No. 3784, Size 40M'. The chocolate brown wool knitted cuffs and waistband are in very good original condition. There is some minor snagging and small moth holes to the waist but this is far better than usually found. The only notable fault is to the lining, adjacent to the collar where it has become partially detached and has small holes. The jacket benefits from a superb embroidered felt patch for the 446BG with the motto 'Voler Venger Vaincre' (Fly Avenge Vanquish). Above this there are stitch holes where the owner's name patch has been carefully removed. Stitch holes can also be seen on the left shoulder where an 8th AF patch would have been.

The 446th Bombardment Group was formed during the spring of 1943 at Tuscon Arizona, moving to England in October-November 1943 and beginning combat missions in December of the same year. They were based at Bungay airfield near the village of Flixton in Suffolk and operated on B-24 Liberator aircraft. Known as 'The Bungay Buckaroos', the 446th, comprising the 704th, 705th, 706th and 707th Bomb Squadrons formed part of the 20th Combat Wing (with 93BG at Hardwick and the 448th at Seething).

The group flew as part of the strategic bombing offensive, but like most 8th AF groups also took part in support operations for missions such as the D-day landings, Market Garden and the Rhine Crossings. They flew a total of 273 missions for a loss of 58 aircraft. They claimed 34 enemy aircraft, 11 probables and 8 damaged.

The jacket is directly from the son of the owner. However, as far as he is aware his dad did not come to England but was stationed at Denver where the unit passed through. This is presumed to be where he acquired it.

Overall this is a very nice original jacket worthy of any 8thAAF collection. Stock code DRF/DV-1