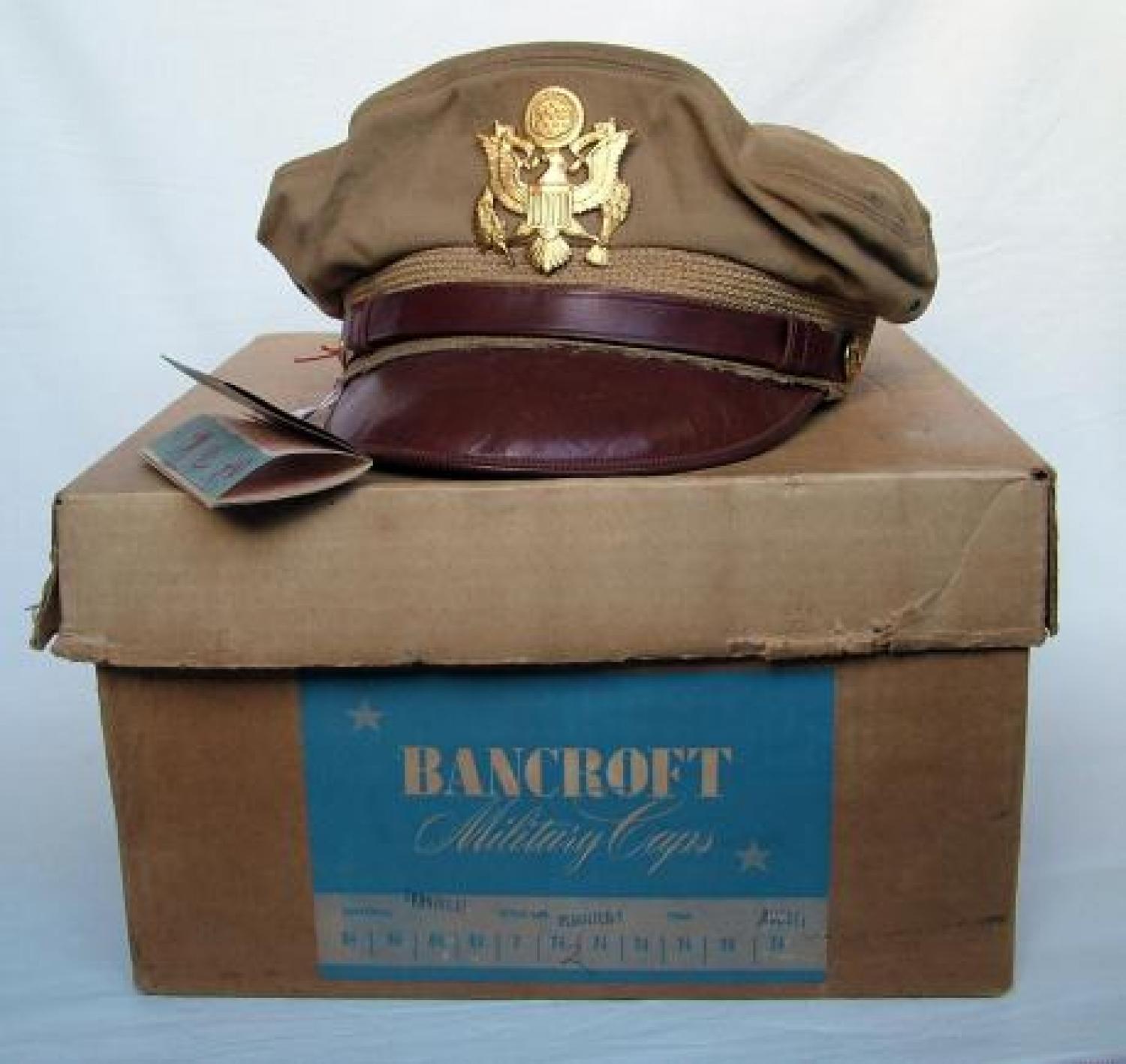 SOLD
Bancroft 'Flighter'. Topical pattern. Small to medium size. Pale tan cotton lightweight cap with a single thickness (true crusher type) russet brown peak. Beige satin lining with greasecloth crown. The cap appears to be in unused but 'storage aged' condition due to some mothing issues. There is a small moth hole to the side near the vent eyelets (see photo) and 4 tiny holes to the crown. In addition there is some moth damage around the 'edges' of the cap - see photos. There is also some moth/loss of fabric where the cloth meets the peak - see photos. The peak remains in nice condition although probably not as flexible as when new. Fitted with matching russet leather front strap. Excellent badge. The greasepaper liner is discoloured/crinkly as usual but the Bancroft logo can be seen beneath. The original packing tissue has stuck to the greascloth over the years and looks a bit messy but this could probably be removed with care. There is still original tissue behind the leather band in places too. This perforated inner leather band is in very good order, the 'Curve Controlled, Flighter' logo etc are good and clear. Comes with the exxtremely rare original 8 page Bancroft care booklet giving details of how to handle, clean and care for all types of Bancroft caps. Amazingly it also has the original issue card box. This in good condition although the lid has some wear and damage. Good/good '+' seemingly unused condition overall. Bancroft caps are considered by most collectors to be the best available and the 'Flighter' model is always highly sought after. The first boxed example we have ever seen. Although unamed this cap forms part of the effects of a B-17 / B-24 pilot with the 490th Bomb Group (Heavy), 848th Bomb Squadron (H). 1st Lieutenant Edward C. Kinzler was born on January 29th 1922 in Philadelphia, Pennsylvania, USA. He enlisted on June 23rd 1942. His basic training was completed at Coffeyville, Kansas and Advanced Flying School, Altus Field in Oklahoma as a 2nd Lieutenant. Temporary promotion was granted to 1st Lieutenant in April 1944. He arrived in Britain on 5th May 1944 as a B-24 pilot flying from R.A.F. Eye (AAF Station 134) near Stowmarket, Suffolk. He flew 22 operational flights (combat missions) on B-24s and a further 13 after changing to B-17s in August 1944. Targets included Hemmingstedt, Frankfurt, Nurenberg, Arnhem, Ludwigshafen, Munster, Berlin and Cologne. He also flew training missions whilst with the 8th. Kinzler left England in November, arriving back in the USA on 28th November 1944. For his service flying missions in the European Theatre of Operations (ETO) flying missions over Normandy, Northern France and Germany he was awarded the Distinguished Flying Cross, Air Medal with 4 oak leaf clusters and the ETO medal. He was relieved from active service on June 3rd 1945. Having survived a tour of operational flying he was killed in 1947 in a cruel twist of fate during a crop dusting flight. Stock code U18641.