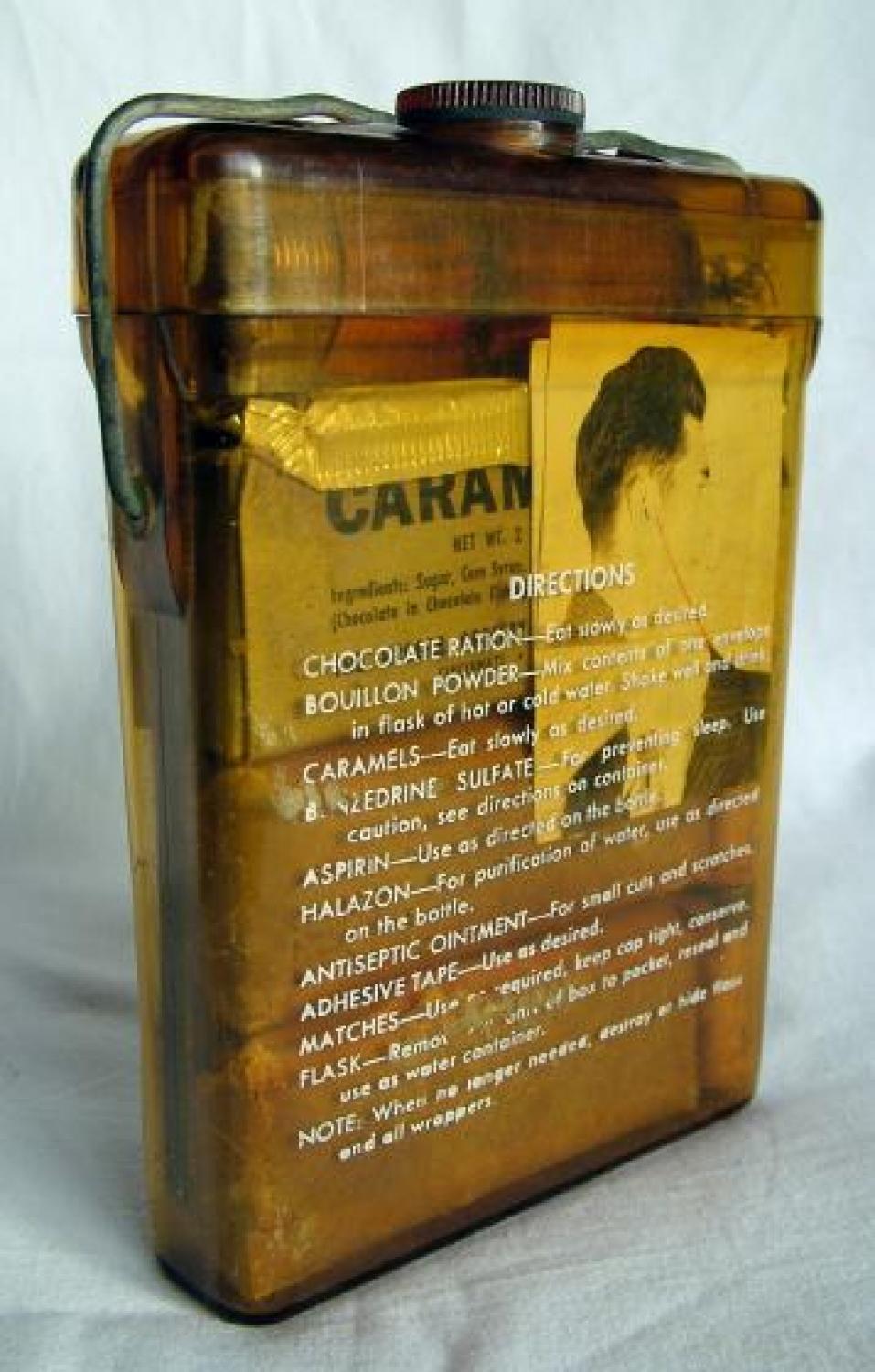 SOLD
Kit, Emergency Sustenance, Type E-3A. Known as a 'personal aids' kit this contained escape and evasion equipment in a waterproof ethyl cellulose plastic flask designed to fit in the airman's pocket. A list of the components and directions for use is printed on the side. Contains matches in a plastic container; 2 packet of bouillon powder; 2 x 2oz bars of chocolate; 1 box of caramels; 4 sticks of chewing gum; antiseptic ointment; bottle of benzedrine sulphate tablets; halazone water purification tablets; aspirin tablets; a wrapped hacksaw blade; compass; adhesive tape ; 2 photographs of the user (Kinzler) in civilian clothing for use on forged document. This flask forms part of the effects of a B-17 / B-24 pilot with the 490th Bomb Group (Heavy), 848th Bomb Squadron (H) and was presumably purchased by him when over here. 1st Lieutenant Edward C. Kinzler was born on January 29th 1922 in Philadelphia, Pennsylvania, USA. He enlisted on June 23rd 1942. His basic training was completed at Coffeyville, Kansas and Advanced Flying School, Altus Field in Oklahoma as a 2nd Lieutenant. Temporary promotion was granted to 1st Lieutenant in April 1944. He arrived in Britain on 5th May 1944 as a B-24 pilot flying from R.A.F. Eye (AAF Station 134) near Stowmarket, Suffolk. He flew 22 operational flights (combat missions) on B-24s and a further 13 after changing to B-17s in August 1944. Targets included Hemmingstedt, Frankfurt, Nurenberg, Arnhem, Ludwigshafen, Munster, Berlin and Cologne. He also flew training missions whilst with the 8th. Kinzler left England in November, arriving back in the USA on 28th November 1944. For his service flying missions in the European Theatre of Operations (ETO) flying missions over Normandy, Northern France and Germany he was awarded the Distinguished Flying Cross, Air Medal with 4 oak leaf clusters and the ETO medal. He was relieved from active service on June 3rd 1945. Having survived a tour of operational flying he was killed in 1947 in a cruel twist of fate during a crop dusting flight. The kit is in good overall condition and would appear to be complete (as far as I can tell). A superb item. Check out the other items relating to this veteran. Stock code C18668.