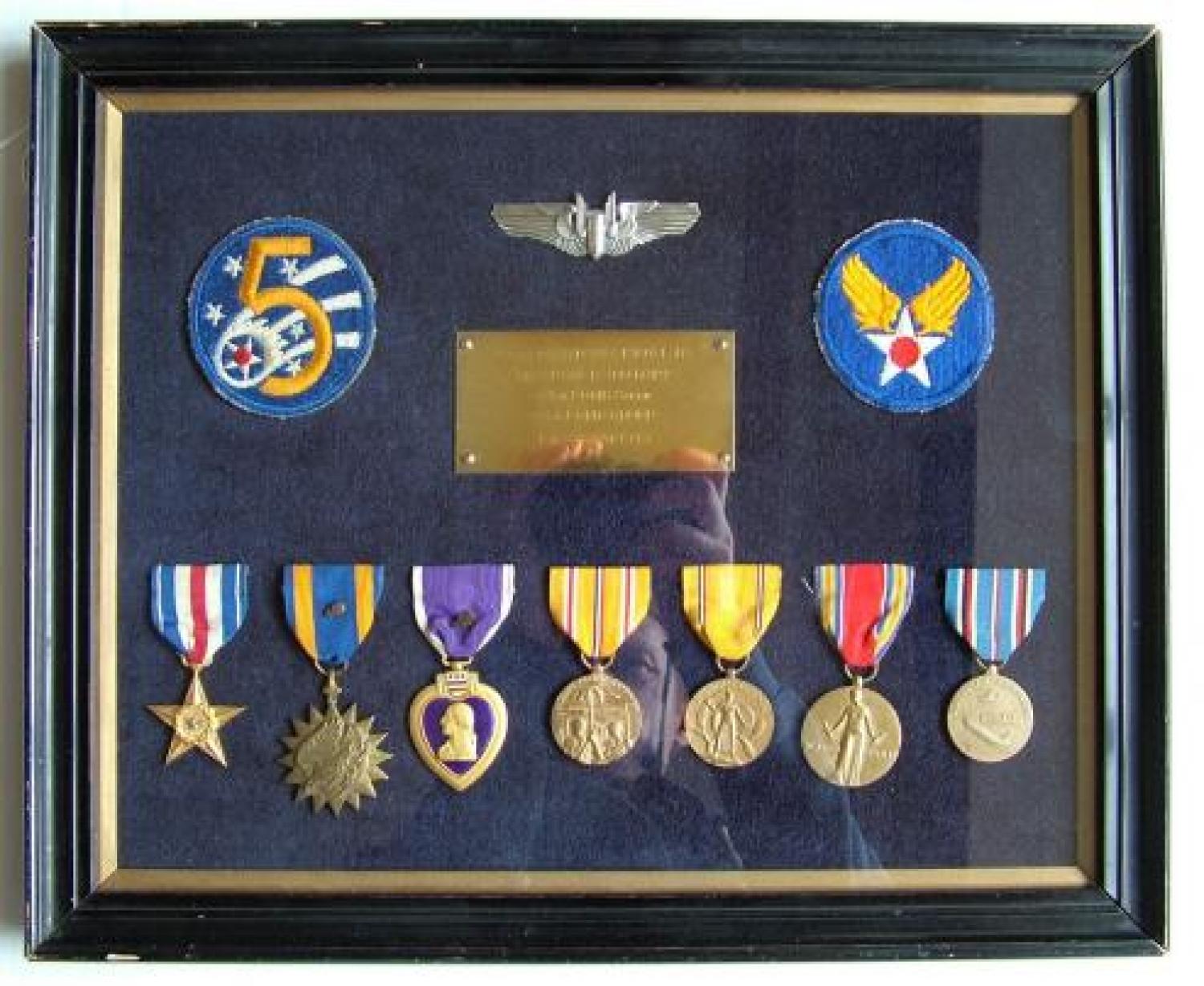 SOLD
Grouping to Sergeant Edward W Driscoll Jr. Radio Operator/Airgunner 36047422, 64th Bomb Squadron, 43rd Bomb Group. Shot down and killed in action, 21st May 1943 in B-17E Flying Fortress 41-9244. The grouping consists of his full sized Sterling silver marked clutch-backed airgunner wing, AAF and 5th AAF shoulder patches. His medals include the Silver Star, Air medal and Oakleaf, Purple Heart and Oakleaf, American Defence, American Campaign, Asiatic Pacific Campaign and WW2 Victory medal. These are not named but this is understandable as most were issued posthumously to his parents as indicated by the newsclippings with this lot. A large amount of research has been carried out and is included. There are details of his gallantry awards : The Purple Heart/Silver Star were awarded for injury c.1943, the second Purple Heart was awarded for his death and the Air Medal with oak leaf cluster awarded posthumously. The Air Medal being for meritous achievement during a mission against a convoy of enemy warships in Houn Gulf c.1943 when despite anti-aircraft fire two direct hits were scored and the ship sunk. The B-17s were then attacked by five Zeros which were successfully repulsed by the gunners. The oak leaf cluster to the Air medal was awarded for meritous achievement on March 2nd 1943 whilst attacking an enemy convoy near the New Guinea coast. One direct hit and three near misses were scored and they were attacked by Zeros once again. Driscoll's B-17 was shot down by a night fighter on a mission to bomb Vunakanau Airbase, Rabaul. Only two of the crew managed to bail out and Driscoll was still in the aircraft when it ditched into the waters of St. George's Channel, New Britain, exploding on impact and sinking. Only one crewmember survived and a photocopy of his casualty report c.1944 is included and makes very interesting and graphic reading. He states that 'the right wing of the ship was hit setting fire to numbers 3 and 4 engines. Later a second burst was received in the left wing setting numbers 1 and 2 engines on fire. The incendiary bombs were on fire. I bailed out at about 200 feet above the water. I was hit by shrapnel by the second burst of fire and I noticed that the navigator, Lt. Aguirre seemed slightly dazed. None of the crew other than the co-pilot, Lt. Rippy and myself succeeded in bailing out and I believe that there is no possible chance that any other of the remaining members of the crew could have survived the explosion of the ship. As I hit the water, I could see the co-pilot's chute travelling down toward the water, and striking the water approximately 3/4 mile from where I had landed, but I never was able to make contact with him. The ship hit the water and exploded immediately. I could see the tail and one wing section blown into the air and settle in the water. I inflated my Mae West and swan for seven hours until I reached the shore near the reef just below Induna Island. I later learned from natives who assisted me that the co-pilot being unable to hide because of exhaustion was subsequently captured by two Japanese soldiers who took him to Rabaul by destroyer, sent down for that purpose. The natives told me the co-pilot was beheaded when he reached Rabaul.' There are also copies of newsclippings regarding Driscoll, his exploits, awards and his loss in action. Others tell of his posthumous awards being made to his parents. There is a photocopy of the telegram informing his mother that he was MIA, photocopies of V-mails and a letter and exerpts from letters to friends and family. Copy photos shows him with his crew and receiving the Purple Heart/Silver Star from General George Kenny. There is also a report about Japanese pilot Shigetoshi Kudo and from this research it is apparant that he shot down both Driscoll's and another B-17 on that fateful night.
Extensive additional research includes a complete copy of the Individual Deceased Personnel Files (IDPFs) pertaining to most members of the crew. and a hard copy of the Missing Aircrew Reports (MACR). Enough research to fill a boxfile 8cm/3" deep. The medals, wings and patches are tastefully presented in a glazed frame (approx. 40 x 35cm) with a brass plaque engraved with Driscoll's details. A super grouping with masses of research. Postage is high due to the weight of the documentation and frame. Stock code M18897.