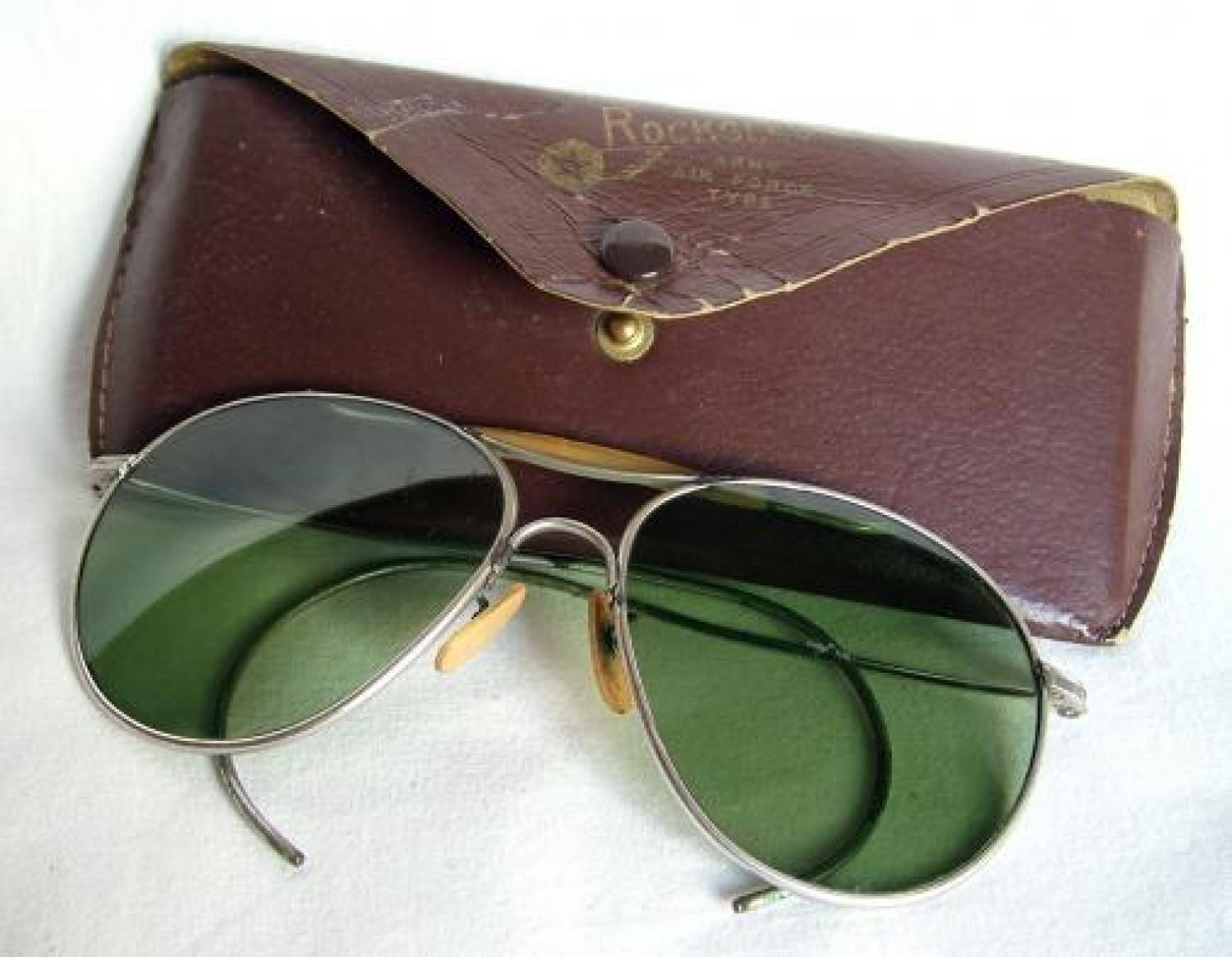 SOLD
By Rockglass. AN6531-1 Type II Sunglasses. Classic AAF sunglasses with nickel silver wire frames, wraparound 'comfort' side-arms and green/grey tinted glass lenses. Beige sweat brow pad and nose-rests. With original fibre Rockglass 'Army Air Force' case. The glasses are in good condition bar the usual light tarnishing and verdigris on the frames. Light marking/scratches to the centre of the left lens. There is minor distortion of the sidearms. Small crack in the brow bar. The case is complete but well worn with soiling and some surface wear and splitting at the 'fold' (see photos). Overall, a good/good '+' used pair of glasses. No markings on the actual glasses. These are part of the effects of a B-17 / B-24 pilot with the 490th Bomb Group (Heavy), 848th Bomb Squadron (H). 1st Lieutenant Edward C. Kinzler was born on January 29th 1922 in Philadelphia, Pennsylvania, USA. He enlisted on June 23rd 1942. His basic training was completed at Coffeyville, Kansas and Advanced Flying School, Altus Field in Oklahoma as a 2nd Lieutenant. Temporary promotion was granted to 1st Lieutenant in April 1944. He arrived in Britain on 5th May 1944 as a B-24 pilot flying from R.A.F. Eye (AAF Station 134) near Stowmarket, Suffolk. He flew 22 operational flights (combat missions) on B-24s and a further 13 after changing to B-17s in August 1944. Targets included Hemmingstedt, Frankfurt, Nurenberg, Arnhem, Ludwigshafen, Munster, Berlin and Cologne. He also flew training missions whilst with the 8th. Kinzler left England in November, arriving back in the USA on 28th November 1944. For his service flying missions in the European Theatre of Operations (ETO) flying missions over Normandy, Northern France and Germany he was awarded the Distinguished Flying Cross, Air Medal with 4 oak leaf clusters and the ETO medal. He was relieved from active service on June 3rd 1945. Having survived a tour of operational flying he was killed in 1947 in a cruel twist of fate during a crop dusting flight. Check out the other items relating to this veteran. Stock code G18659.