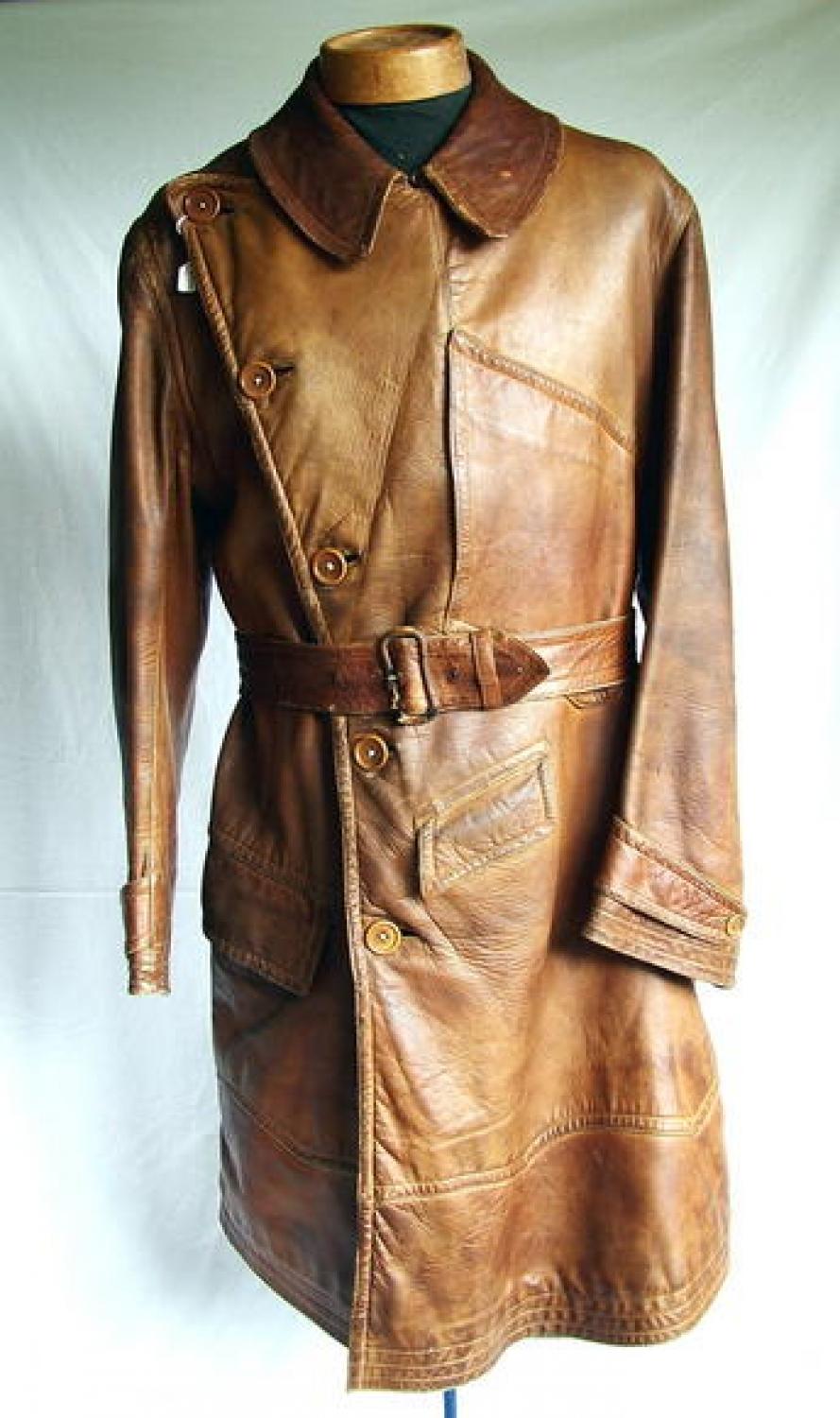 SOLD
Classic knee length mid tan chromed leather coat with a wrap over, asymetric front having an angled map pocket to one side. Belted at the waist with two further flapped pockets in the sides of the 'skirt' and a smaller flapped pocket towards the front. Mid tan cotton lining. Named faintly in ink on the lining close to the collar ' Cpt. Wilson XI SQDN. RFC'. The neck is secured with a metal 'hook/clasp' and there is also a buttoned collar strap. Similar straps feature at the sleeve ends. Research reveals a Captain Robert Eric Wilson, 3rd (Reserve) Batallion, Hampshire Regt. and Royal Flying Corps who could have been the original owner. He was appointed Captain on 26th February 1915 (Lieut. as of 30th June 1913) ; Flying Officer (RFC) 16th July 1916. He served with 11 Squadron during 1916 and later with 32 Squadron. On 2nd September 1916 he was shot down whilst flying a D.H.2 engaging enemy aircraft and crashed at Pys near Bapaume where he was taken prisoner by the Germans. Wilson was repatriated following his release on 18th December 1918. The previous owner purchased this coat over 20 years ago when it was found thrown out for the bin-men! A return trip to the house secured a set of RFC shoulder titles (see other listing) , gloves (listing later) and copy of the Aeroplane dated Jan 1918 in which a Capt. R E Wilson is mentioned as having been released/repatriated from Germany. Apparantly the uniform, boots and maps had been disposed of in previous weeks via the bin!
The Coat is in very good overall condition. There is wear and rubbing (with some surface peeling) to the shoulders, arms and exposed edges but no serious damage. The leather covered buckle is peeling a bit and the lining has some fraying and small holes but is generally good. The copy of 'The Aeroplane' , Vol. XVI, No.1, Wednesday Jan 8th 1919. is the special 'R.N.A.S. & R.F.C.' issue listing all the Naval & MIlitary Aeronautics appointments, awards, casualty list, RNAS Honours for 1918, RFC Honours for 1918 and so on. In addition it has super period adverts for the major aircraft companies, outfitters, tailors etc. Condition of the magazine is quite poor with ragged edges, tears and taped spine and covers.
An interesting and rare RFC coat. Stock code J15831