236 Squadron based at Thorney Island were on a photo-reconnaissance mission over Le Havre.  75 years ago they lost two of their aircraft during deteriorating weather conditions and intense anti-aircraft fire over Cap de la Hague.  Major Schellmann of JG2 is believed to have shot down Blenheim L6778 at 12.15pm.  The aircraft was flown by 22 year old Pilot Officer Charles Raymond Delauney Thomas (40031) with 28 year old A/G Sgt. Harry Donald Buchanan Elsdon (743044).  Thomas's body was recovered and is buried in France, Elsdon is commemorated on the Runnymede memorial.
Pilot Officer Robert Harold Rigby (42149) and Sgt. Donald Duncan MacKinnon (745928) also died when their Blenheim L6639 was shot down during the same PR mission.

The final casualty today was 25 year old Pilot Officer Peter Litchfield (76461) of 610 Squadron (Biggin Hill).  He had previously severely damaged a Bf109 over Dover but was shot down himself at approximately 10am over the Channel north of Calais.  He is commemorated at Runnymede. 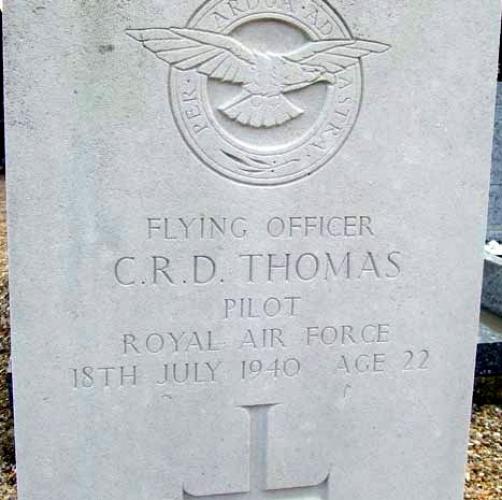