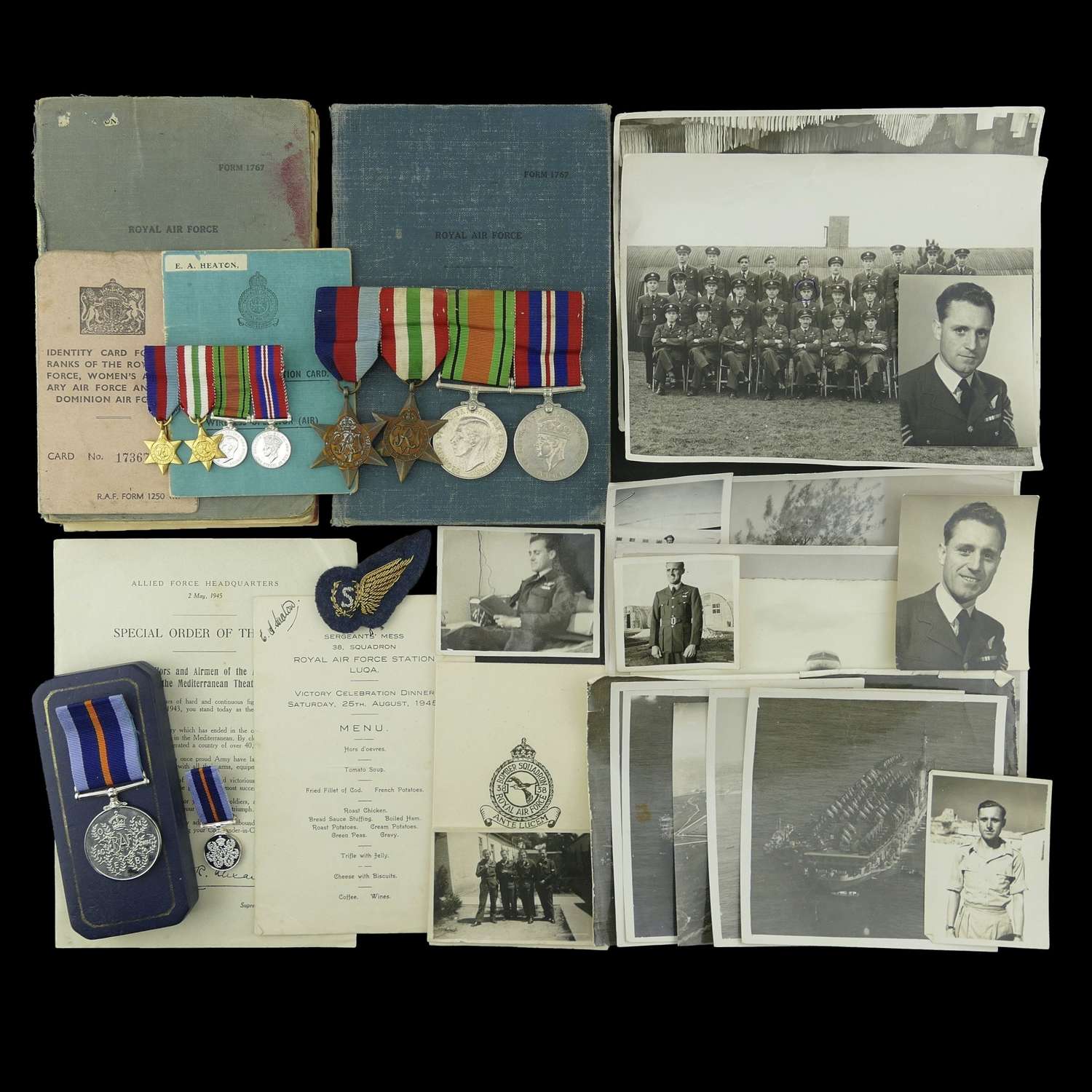 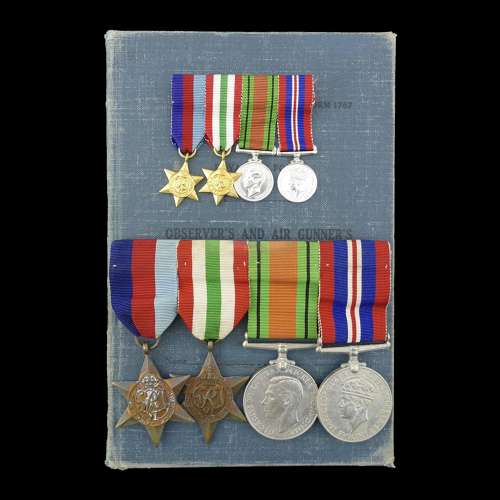 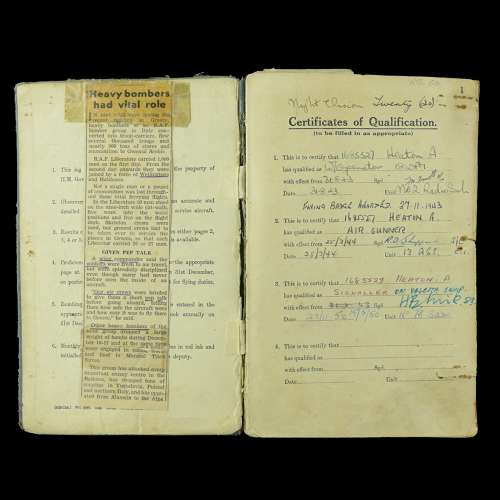 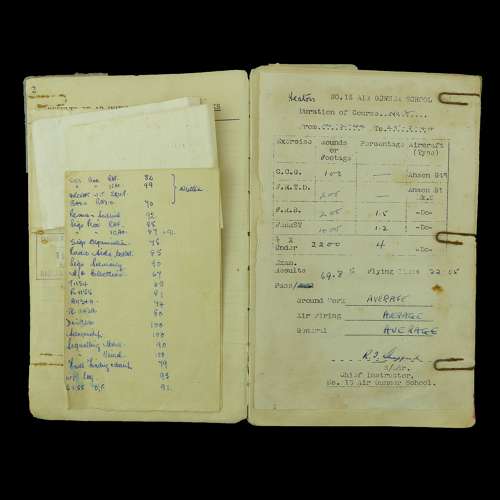 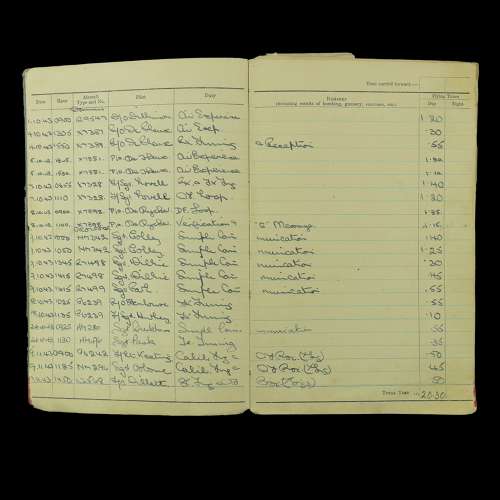 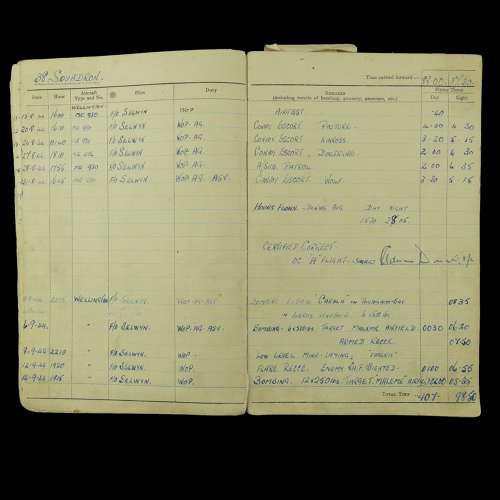 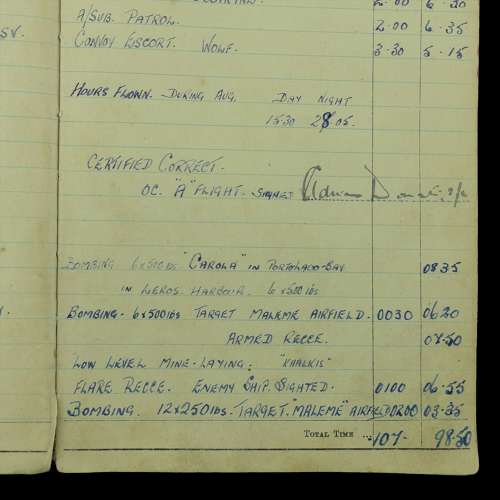 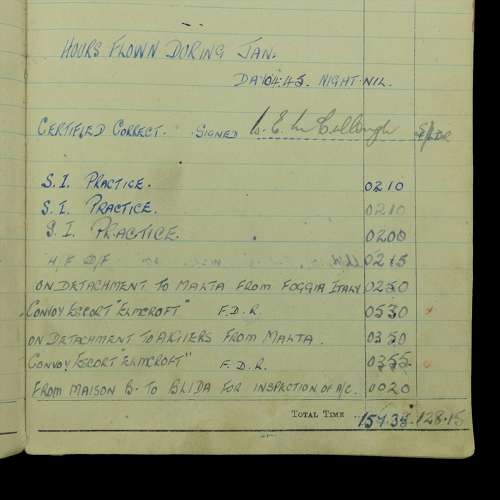 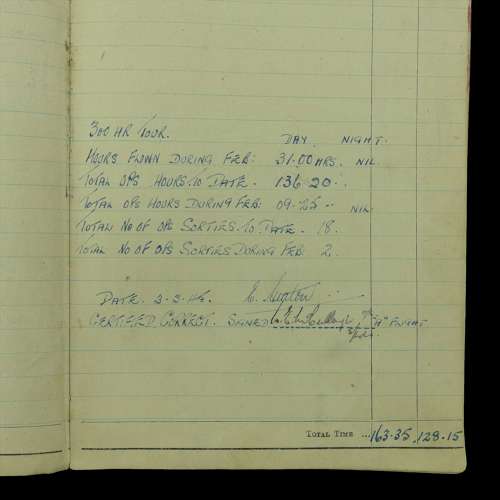 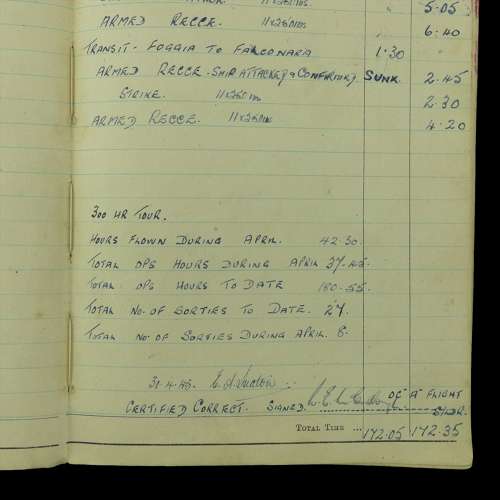 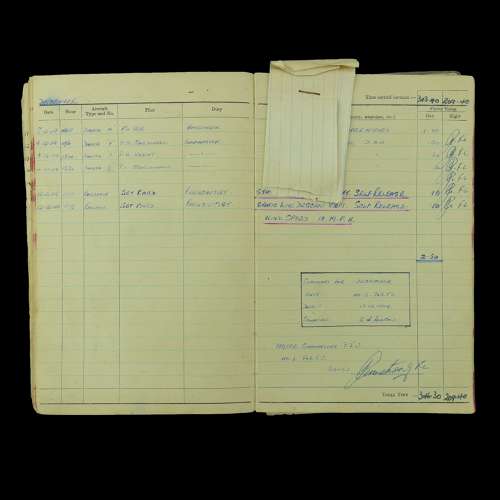 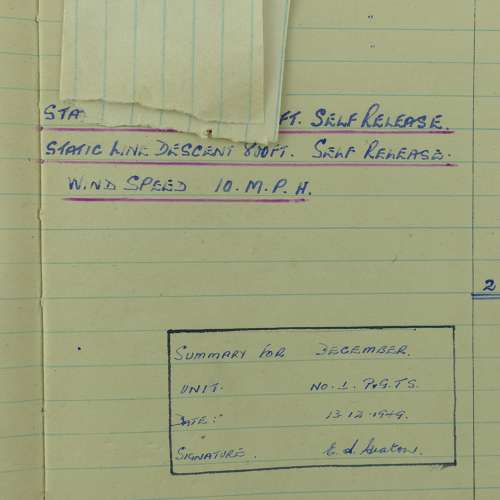 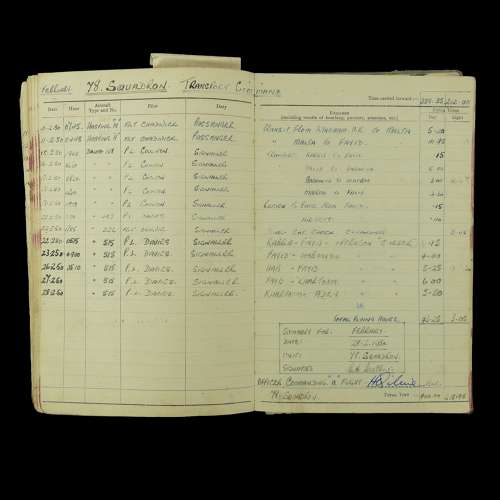 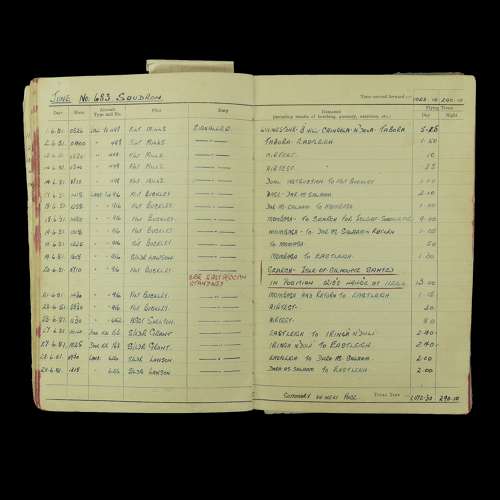 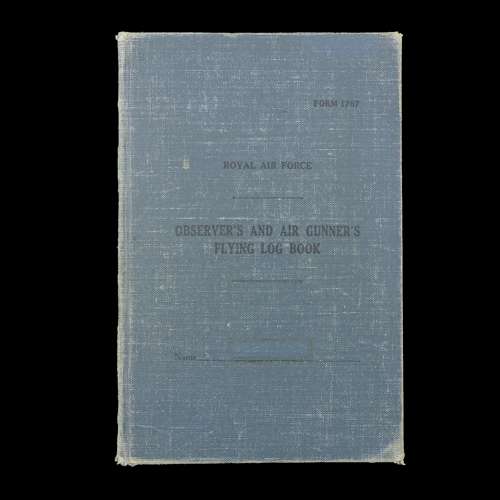 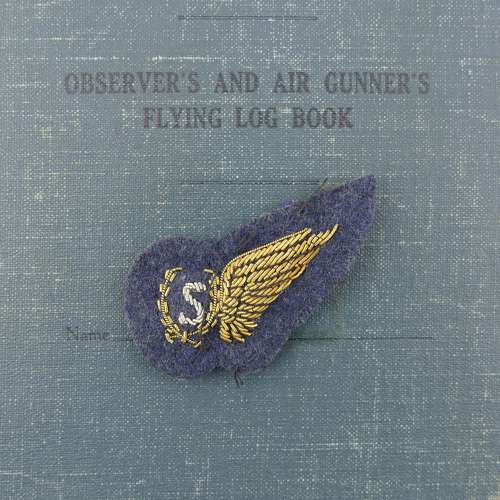 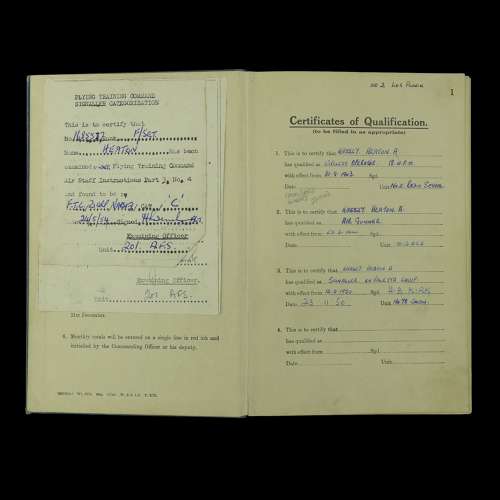 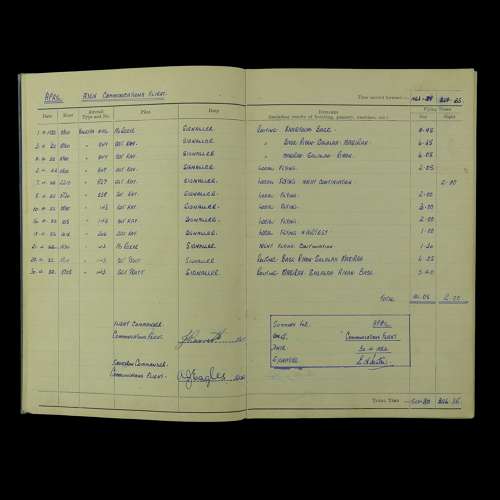 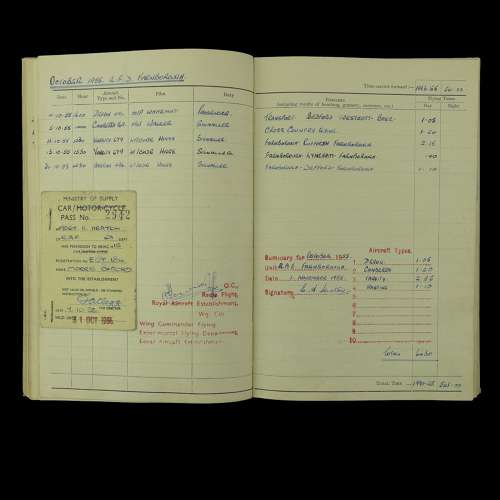 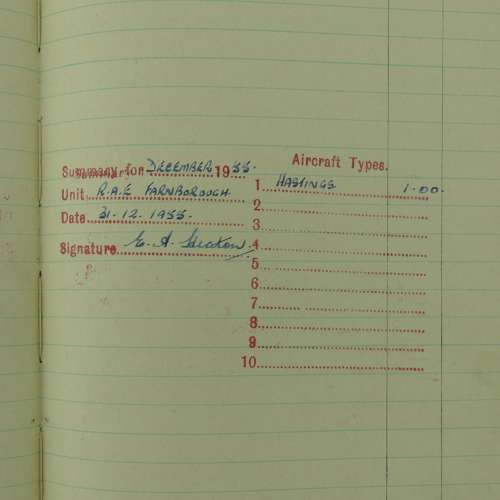 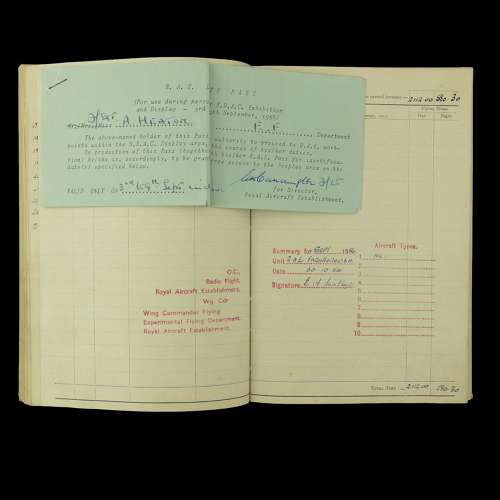 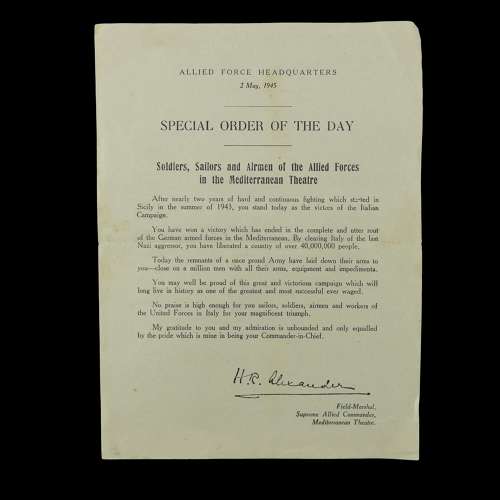 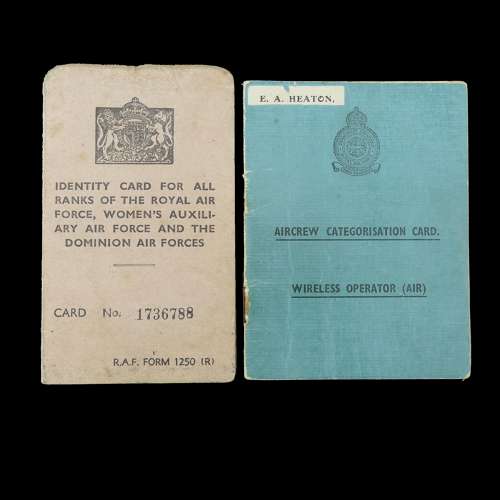 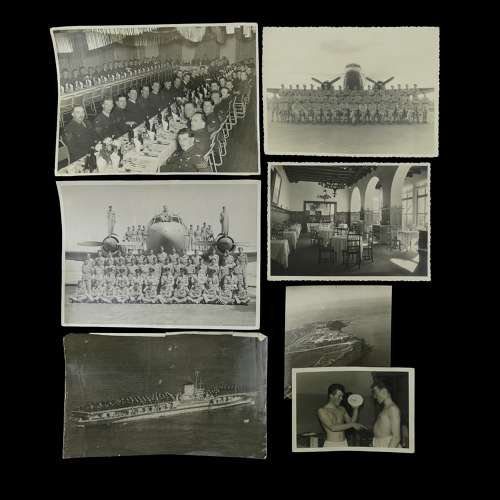 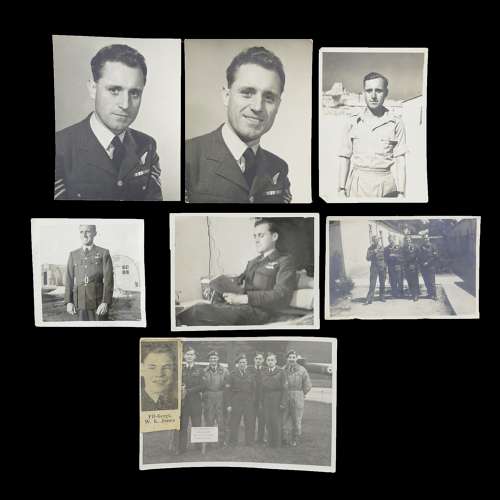 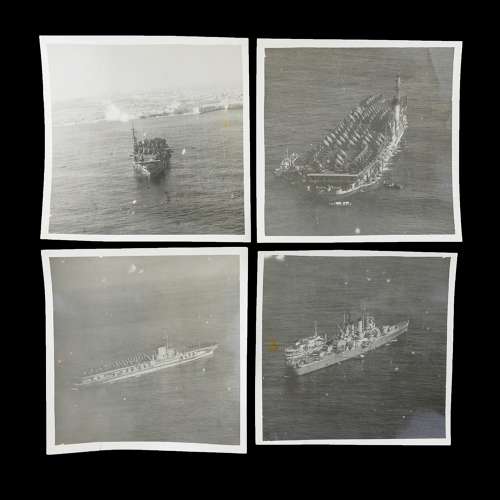 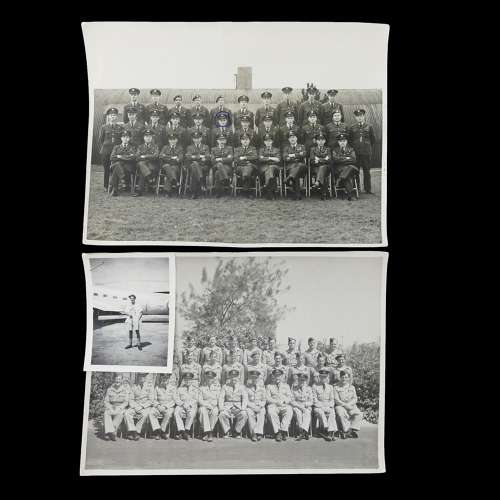 Well written and detailed log books (2) to Wireless Operator / Air Gunner, Eric Arthur Heaton (1685527).  He qualified as a Wireless Operator at No.2 Air Signals School, Yatesbury, Wiltshire in August 1943, and as an Air Gunner at No.13 Air Gunnery School, El Ballah, Egypt, in March 1944.  The first log starts on 1st October 1943 at Yatesbury on Dominie & Proctor aircraft undertaking signals / communications training.  In February 1944 he is undergoing Air Gunnery training on Ansons and on 25th May 1944 he begins flights with 'X' Flight, 78 Operational Training Unit on Wellington bombers.  On 15th August 1944 he begins flights on Wellingtons with 38 Coastal Command Squadron, based in Greece.  Operational sorties include Convoy Escort duties, anti-submarine patrols, bombing of Maleme airfield in Crete and Porto-Lago Bay, Leros (Southern Aegean Sea), supply dropping etc.   On 16th February 1945 the Squadron were placed on detachment to Malta with further Convoy Escorts (including transportation of Franklin D Roosevelt for the Yalta Conference), Armed Recce flights and Anti-Submarine patrols.  On an armed recce sortie on 26th April, his log records 'Ship Attacked - Confirmed Sunk' and by the end of April 1945 Heaton had amassed a total of 27 Operational Sorties.  The Squadron remained in Malta until October 1946 undertaking (mainly) transport flights.  Heaton remained in the RAF after WW2 and in July 1949, was posted to No.7 Radio School at Swanton Morley on Ansons before moving to 240 Operational Conversion Unit Transport Command (on Dakotas).  During December he notes doing two static line parachute jumps from a balloon.  In January 1950 he is at 1333 Transport Support Training Unit, flies as a passenger in a Horsa and undertakes Glider towing exercises.  In February 1950 he was posted to 78 Squadron Transport Command on Valettas undertaking duties as an aircrew Signaller around the Sudan, Nicosia, Malta etc.  In May 1951 Heaton joins 683 Squadron, based in Egypt, involved in the mapping of Arabia and East Africa.  July 1951 sees Heaton back with 78 Squadron where he remained until posted to Aden Communication Flight in January 1952.  From the mid '50s he appears to be working mainly as a 'Staff Signaller' involved with training and in October 1955 he was posted to the Experimental Flying Department of Royal Aircraft Establishment at Farnborough.  The second log ends in January 1957.  Both logs are stamped and signed off and there are some newspaper clippings inserted.   The logs come with his full size and miniature medals including the 1939-45 and Italy stars, Defence and War, all mounted for wear.  There is also a boxed Bomber Command commemorative medal (plus miniature), his RAFVR lapel badge and post WW2 Mess dress bullion 'S' brevet.  In addition there is a 38 Squadron Victory Celebration dinner menu (signed by Heaton and colleagues), a 38 Squadron Christmas card c. 1945, his ID card c. 1945, his aircrew categorisation card c. 1949, a printed address from Field-Marshal H. R. Alexander, Supreme Allied Commander in the Mediterranean, after the final campaign to end the war in Europe (c. 2 May 1945) and a selection of original photographs.  Approximately 20 in total these include a few WW2 snapshots of Heaton, some of the aircraft carrier F.D.R. at Malta, many captioned on the back.  An interesting grouping worthy of further research.  Stock code P26920.