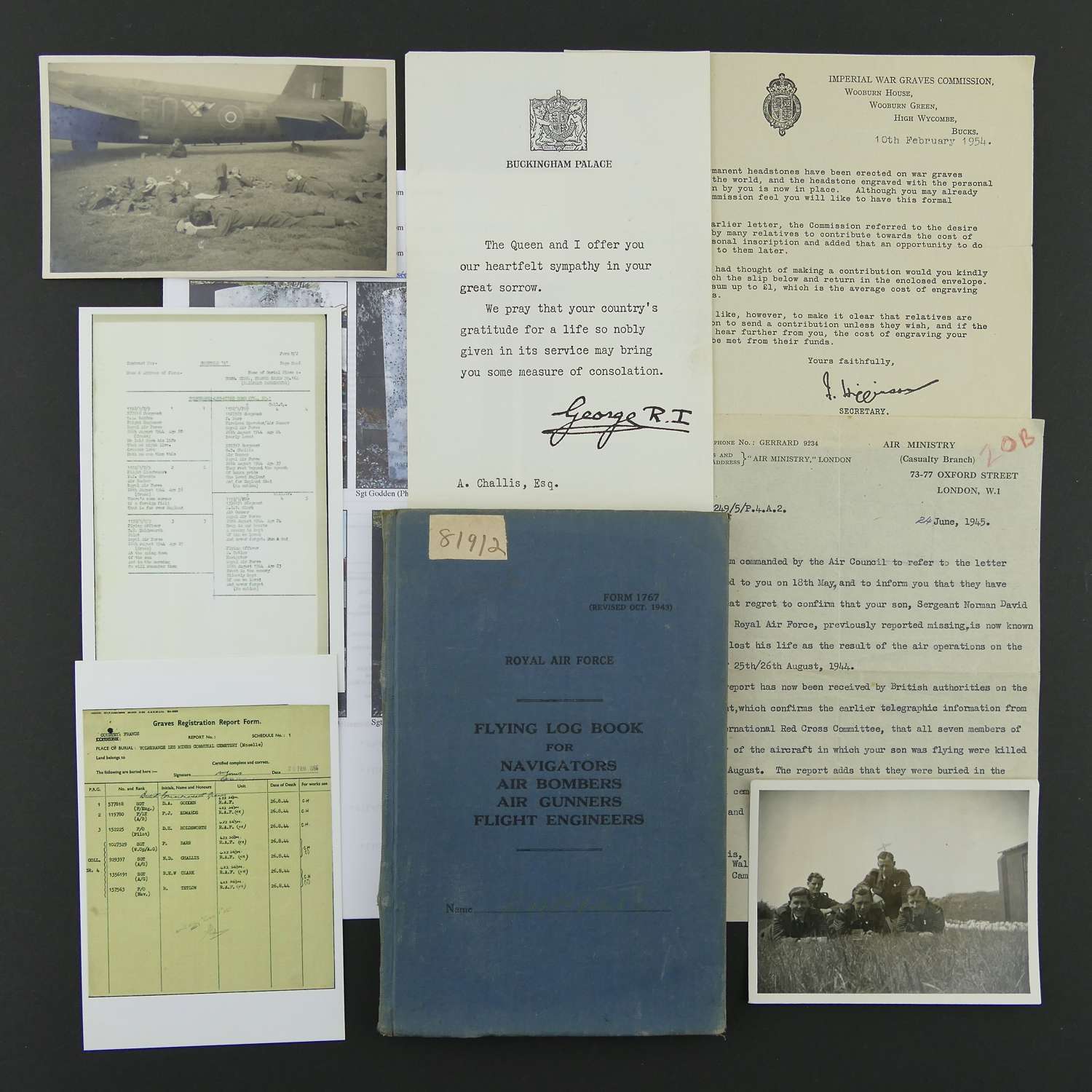 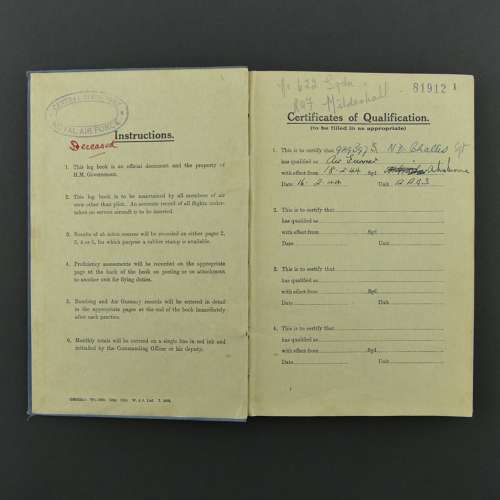 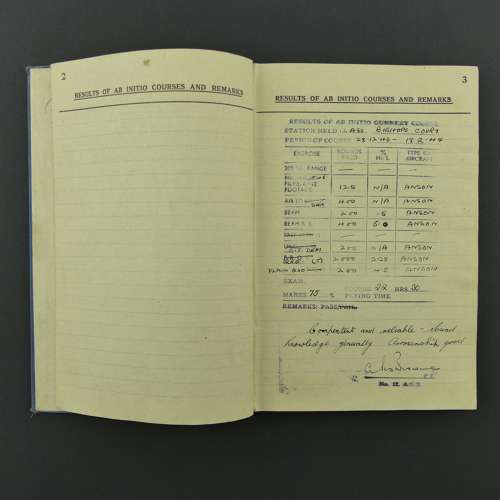 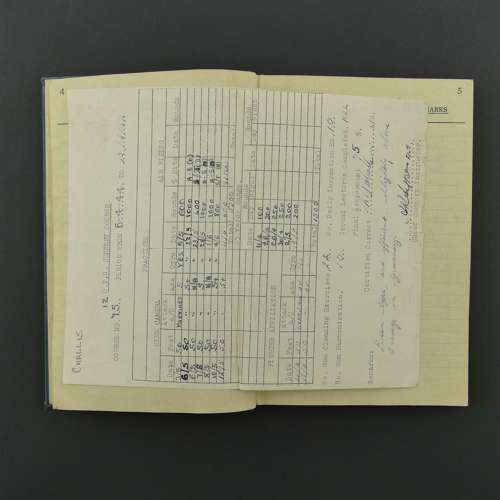 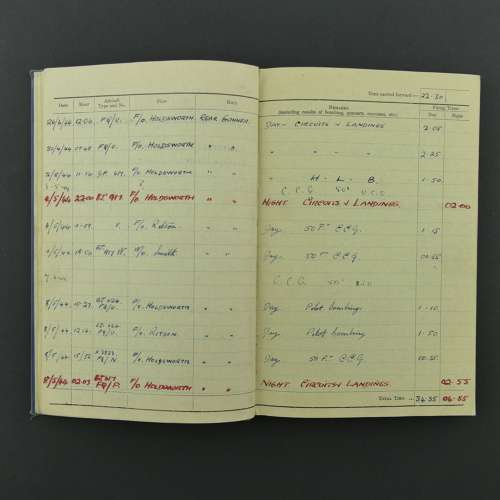 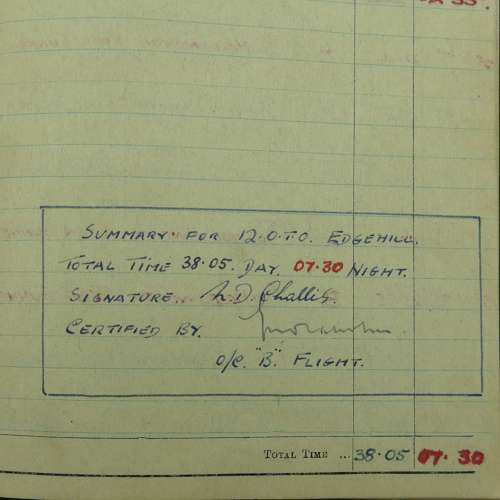 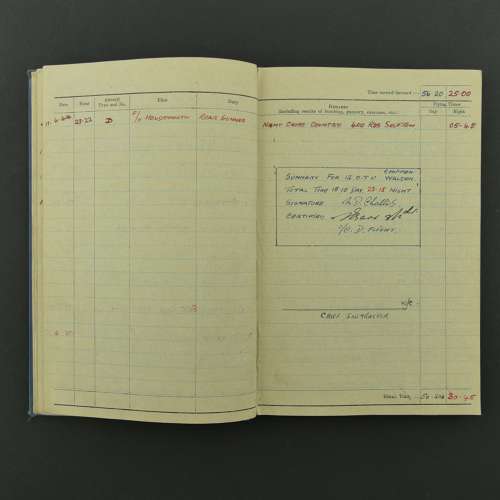 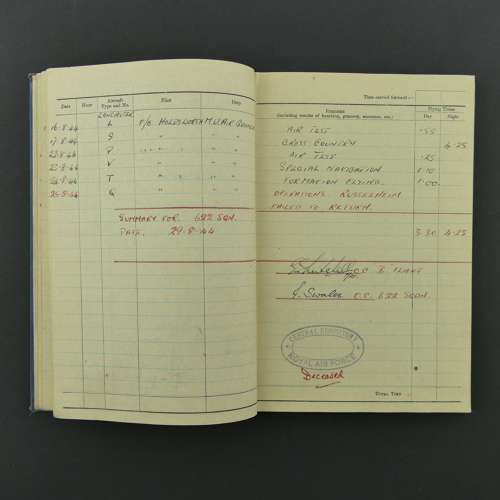 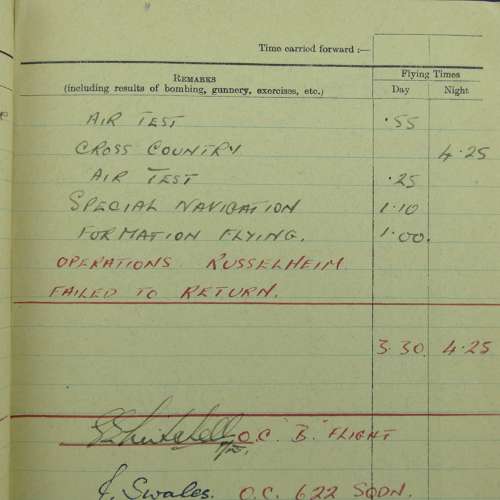 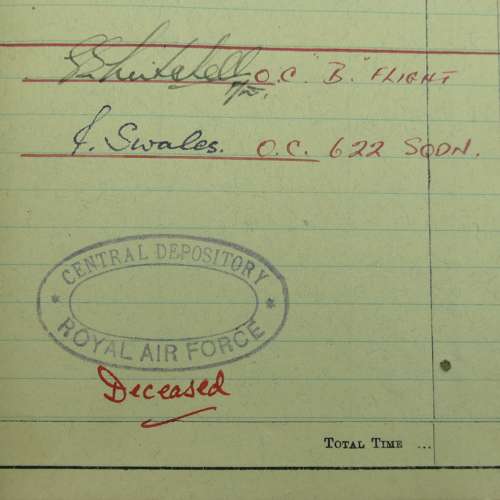 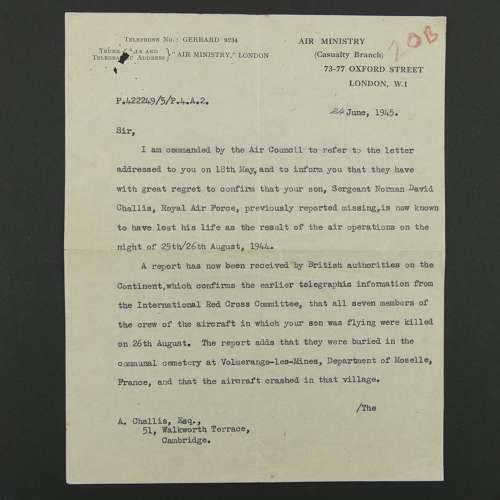 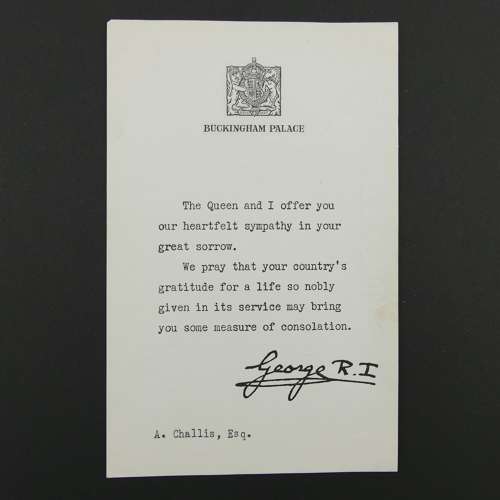 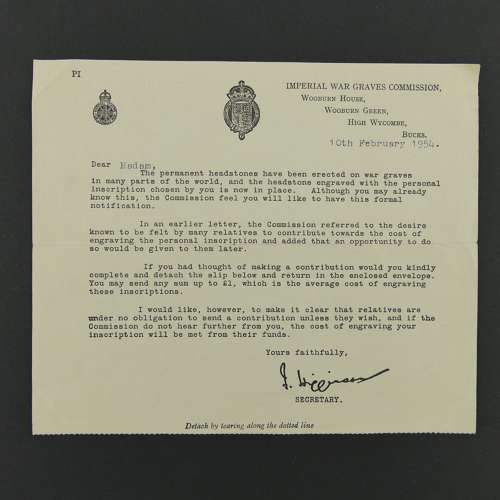 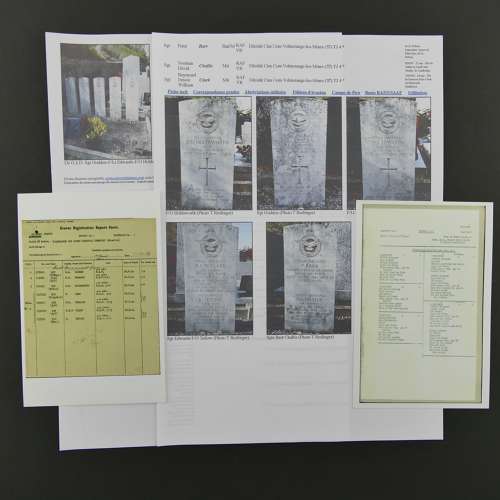 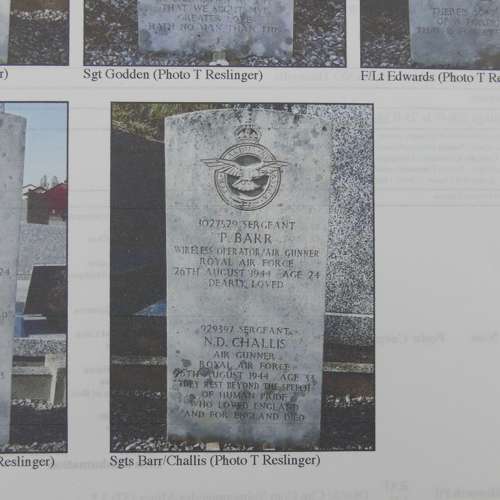 Log book and paperwork to airgunner Sergeant Norman David Challis RAFVR (929397), killed in action on 26th August 1944.  Between 28th December 1943 and 18th February 1944 he attended No.12 Air Gunnery School School, Bishops Court, passing the course as 'Competant and reliable with a sound knowledge generally and good airmanship'. The log begins with flights in Ansons on January 7th 1944.  By April 26th he has been posted to 12 O.T.U at Edgehill, Chipping Walden on training flights, mainly as a rear gunner on Wellington bombers flown by Flying Officer Holdsworth who would be his pilot from here on in.  He remained there until 11th June 1944 before posting on 11th July, to 1657 Heavy Conversion Unit at Stradishall.  Here he was briefly introduced to the Stirling before a further move to No.3 Lancaster finishing school on 7th August 1944 and duties as a mid-upper gunner.  Sgt. Challis was posted to 622 Squadron (3 Group) on 16th August 1944 and flew his first operation sortie on 25th.  The aircraft took off at 20.40hrs from Mildenhall in Suffolk, bound for the target of the Opel motor factory at Russlesheim, Hesse, Germany. Pathfinder marking was accurate and the raid was completed in 10 minutes.  Official German reports state that the factory forge and gearbox assembly departments were out of action for some weeks and 179 workers were killed.  Unfortunately Sgt. Challis's aircraft, Lancaster I, LM241  GI-Q was lost, and all of the crew died when it crashed in the village of Volmerange-Les-Mines, close to the border with Luxembourg and approximately 12km NNW of Thionville, France.  Pilot, Flying Officer Dennis Harrington Holdsworth RAFVR, aged 21; Flight Engineer Sgt. Dennis Albert Godden RAF, aged 20; Navigator, Flying Officer Royston Tetlow RAFVR, aged 23; Bomb aimer F/Lt. Philip John Edwards RAFVR, aged 36 and married; Wireless Operator, Sgt. Peter Barr RAFVR, aged 24; Sgt. Raymond Ernest William Clark RAFVR, aged 24 and Sgt. Norman David Challis RAFVR, aged 33, son of Arthur and Sarah Ann Challis of Cambridge, are all buried in Volmerange-Les-Mines cemetary.  The inscription on Challis's grave reads ' They Rest Beyond The Speech of Human Pride Who Loved England And For England Died'. The log is marked in red 'OPERATIONS RUSSELHEIM, FAILED TO RETURN' and 'Deceased' and is signed off by the 622 Squadron Commanding Officer.  It comes with two photographs of him with his crew, a letter of sympathy from the King and Queen and a letter to his father from the Air Ministry Casualty branch dated 24th June 1945.  This confirms that his son, previously reported missing is now known to have lost his life as a result of air operations and that he and the rest of the crew are buried in Volmerange-Les-Mines cemetary in the Moselle region of France.  A further letter from the Imperial War Graves Commission dated February 1954 confirms that a permanent headstone has been erected.  A very poignant first sortie KIA log book worthy of further research.  Stock code P23491.