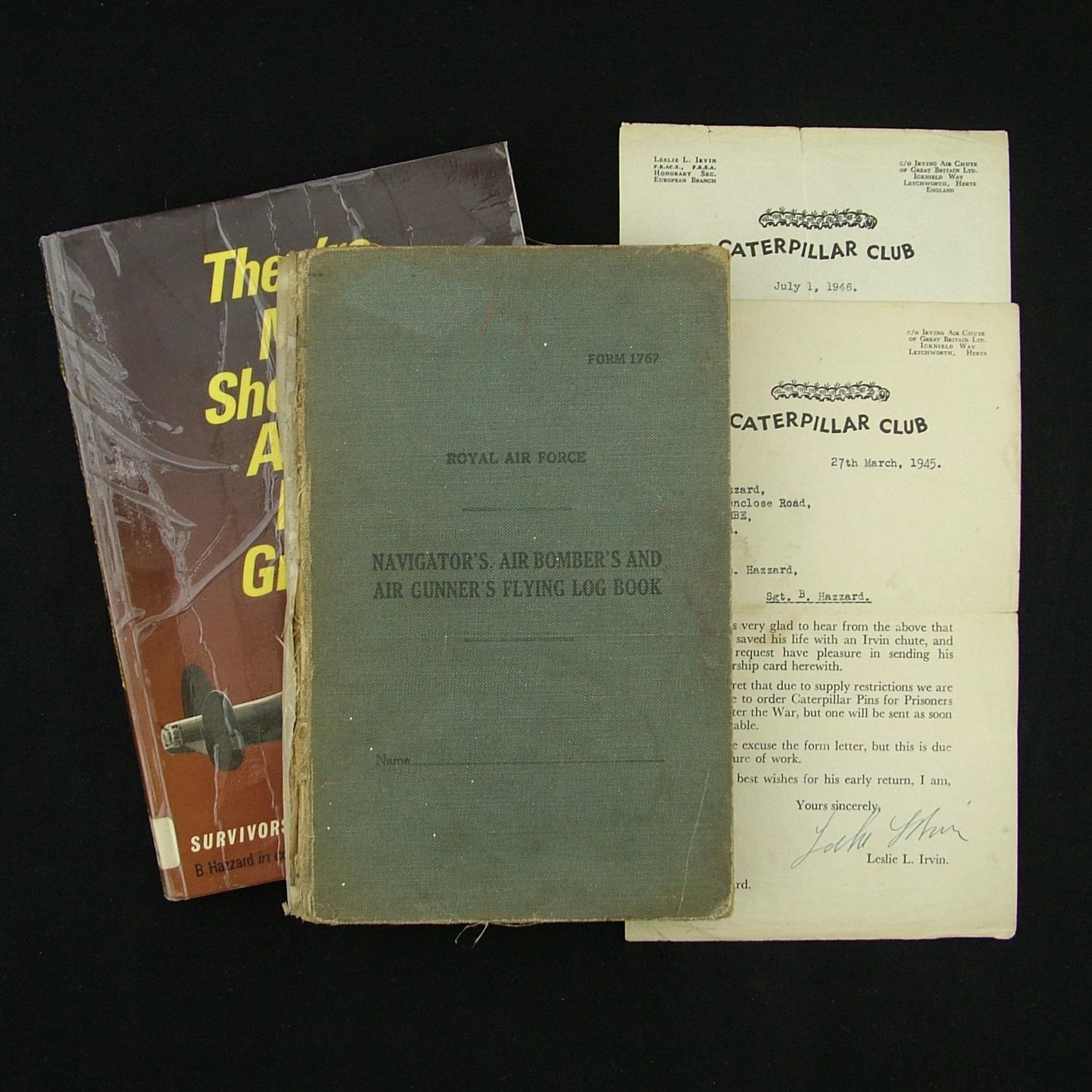 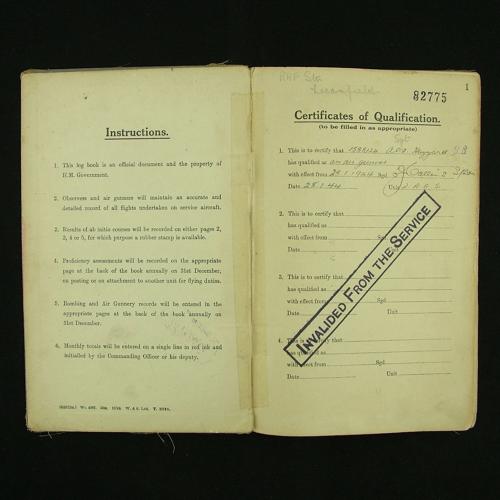 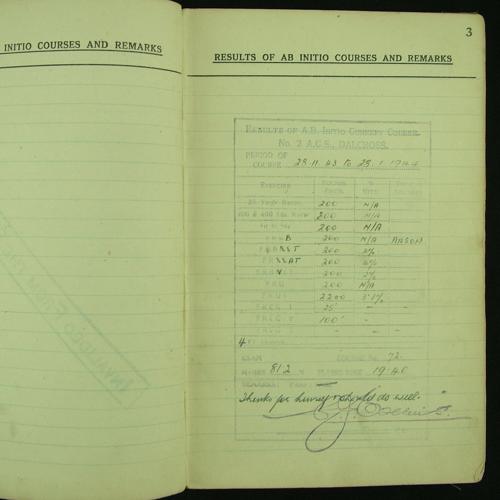 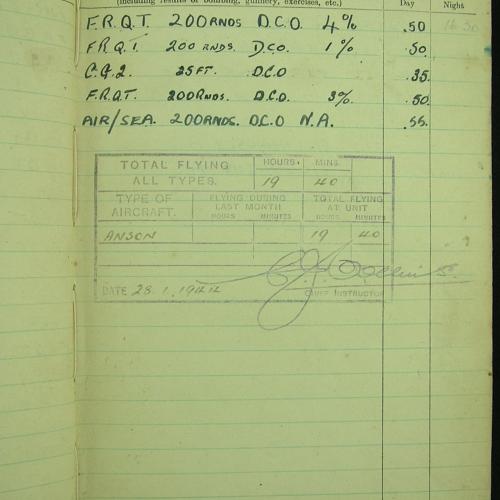 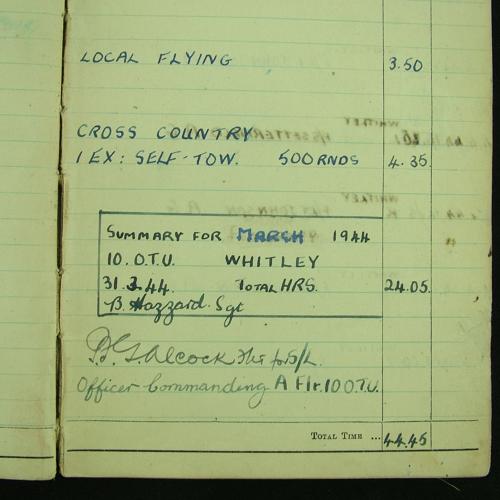 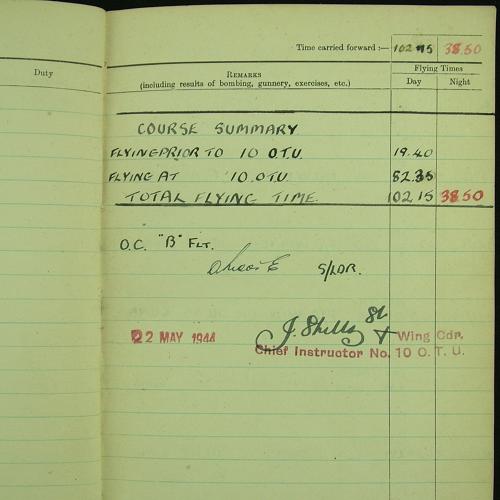 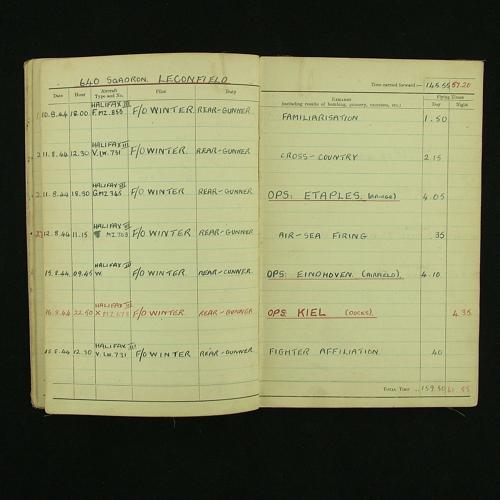 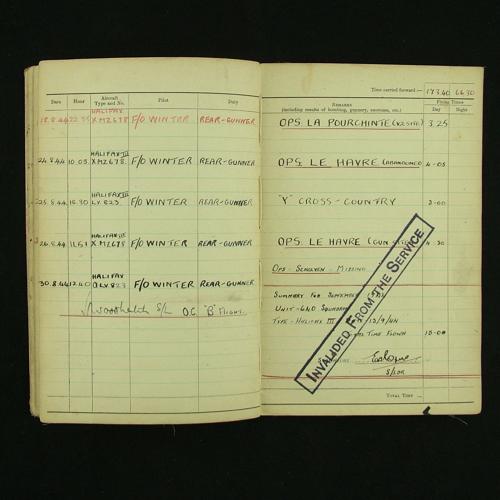 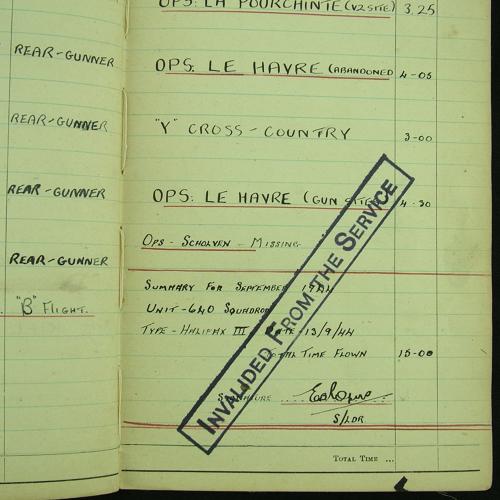 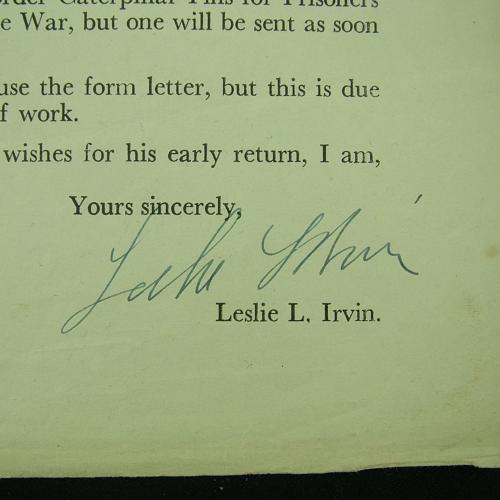 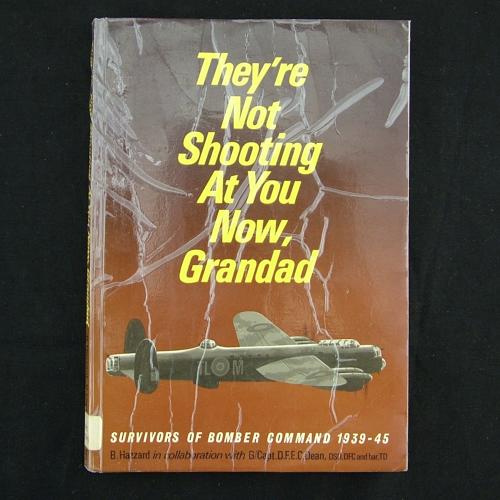 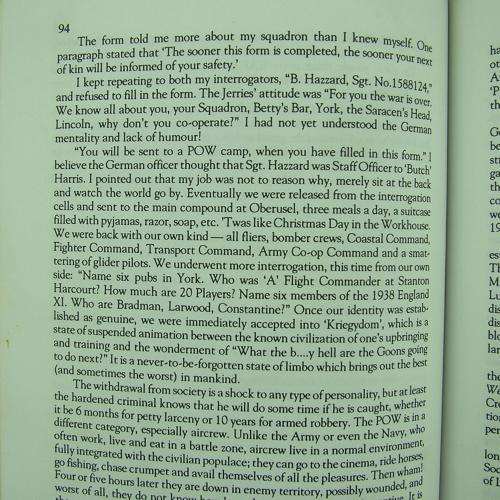 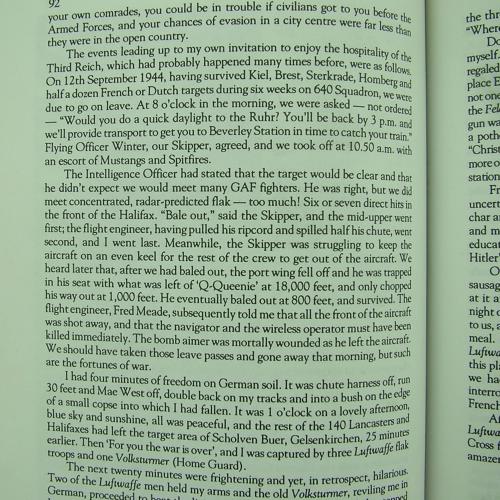 Log book to Sergeant S.B. Hazzard, an airgunner with 640 Squadron.  He  was born in 1925 and joined the RAFVR in 1942.  The log covers the period 11.12.43 to 30.08.44.  It begins with training at No.2 Air Gunnery School, Dalcross on Ansons before moving to No.10 Operational Training Unit on Whitleys.  By 6th July 1944 he is at 1653 conversion unit on Halifax bombers flying as rear gunner before a posting to 640 Squadron, Leconfield in August.  Operational sorties begin on 11.08.44 to bomb a bridge at Etaples (pas de Calais) with further Ops to Eindhoven (airfield), Kiel (docks) and the V-2 rocket site and La Pourchinte.  Two Ops on gun sites at Le Havre follow, the first of which was abandoned.  Then, according to his log they took off at 12.40hrs on 30th August for a daylight raid at Scholven in the Ruhr and were shot down by intense flak, the aircraft (Halifax OLV823) crashing some 2000m to the left of the road between Geldern & Kevelaer close to the village of Berendonk.  The pilot F/O G.W. Winter, flight engineer Sgt. Fred H Mead, airgunner Sgt. T E Veitch & Hazzard all became P.o.Ws but navigator Sgt. John Leonard George Huntley, bomb aimer F/Sgt. William John James Farbrace & wireless operator Sgt. George William Darkin all died and are buried in the Reichswald Forest war cemetary.  Unusually the log is then officially stamped 'Invalided From The Service'. There are other stamps and signatures throughout the log which also comes with two official letters from the Caterpillar Club.  The first, signed by Leslie Irvin himself, dated 27 March 1945 was sent to his mother explaining the lack of pins due to waritme supply restrictions.  The second was sent to Hazzard after the war along with his pin badge (sadly not available with this log).  The log book also comes with a copy of a book written by Hazzard, ' They're Not Shooting At You Now, Grandad  - Survivors Of Bomber Command 1939-45' in which he talks about his own experiences of his final doomed sortie and subsequent capture and interrogation. 'Six or seven direct hits in the front of the Halifax.  Bale out said the skipper, and the mid-upper went first; the flight engineer, having puled his ripcord and spilled half his chute, went second, and I went last.  Meanwhile, the skipper was struggling to keep the aircraft on an even keel for the rest of the crew to get out of the aircraft.  We heard later that, after we had baled out, the port wing fell off and he was trapped in his seat with what was left of Q-Queenie at 18,000 feet, and only chopped his way out at 1,000 feet.  He eventually baled out at 800 feet, and survived.... I had four minutes of freedom on German soil.  It was chute harness off, run 30 feet and Mae West off, double back on my tracks and into a bush on the edge of a small copse into which I had fallen.  It was 1 o'clock on a lovely afternoon, blue sky and sunshine, all was peaceful, and the rest of the 140 Lancasters and Halifaxes had left the target area of Scholven Buer, Gelsenkirchen, 25 minutes earlier.  Then 'For you the war is over', and I was catured by three Luftwaffe flak troops and one Volksturmer (Home Guard)....'  He was incarcerated in camp L7, Bankau near Kreulberg, upper Silesia, Germany.  Now this is where it all gets slightly confusing.  His own book and other research suggests that the last sortie actually took place on 12.09.44 (not 30.08.44) so how the date is recorded incorrectly in his officially stamped log is a mystery!  Log has taped spine repair.  Definitely worth more research.  Stock code P23505.