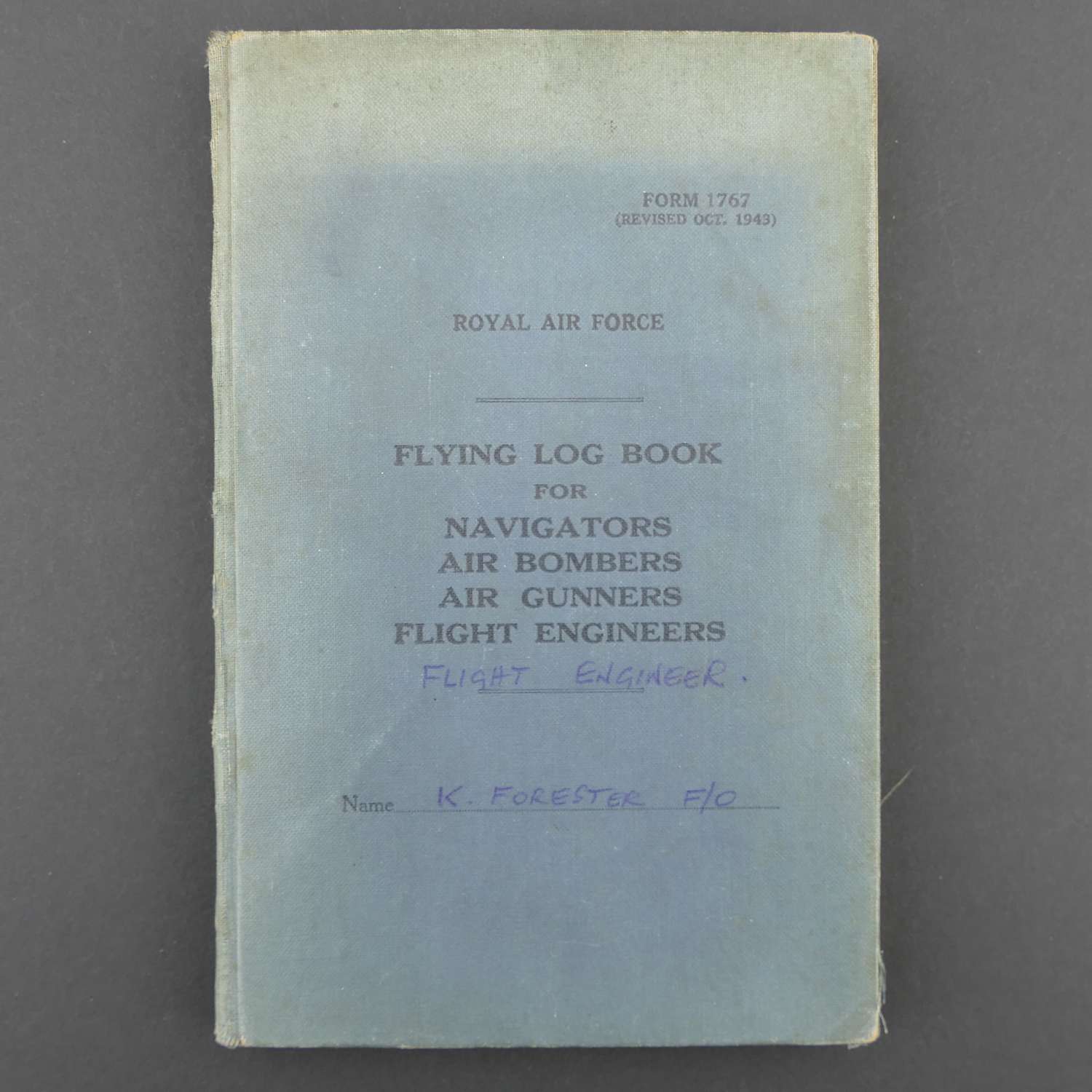 Incredibly well written and detailed log book to flight engineer, Flying Officer K.G. Forester (1274820).  He qualified as an airgunner at No.7 Air Gunnery School, Stormydown, Porthcawl, South Wales in January 1943.  The log starts on June 17th 1943 at 1657 Conversion Unit, Stradishall,  on Stirling I bombers doing circuits and landings and air to air firing (notes 'shot drogue off Lysander').  An entry on 14th June describes a night circuits and landings exercise when their aircraft was attacked by a Luftwaffe Intruder Fw190.  They landed safely but other aircraft were damaged in the hangers.  At the end of June Forester was posted to 90 Squadron at Wratting Common near Newmarket in Suffolk, flying Stirling IIIs.  A photo of him and his crew is glued in the log and he has named everyone shown.  His first operational flight was on 27th June and involved minelaying over the Frisian Islands.  The next day they bombed Cologne and he notes '10/10ths cloud.  Intense heavy flak on target. Aircraft hit by several splinters.  Results good.'  The next Op on the 3rd July was also to Cologne  and he notes 'rear turret hydraulic system out of action'. On 24th they took part in the first raid of the 'Battle of Hamburg', experiencing heavy flak and being coned by searchlights. The airgunners engaged a Ju88 which was claimed as a 'probable'. Their tail fin was badly holed by flak and a new one had to be fitted. During a night flying test on the 27th they ran off the end of the runway on landing and into an adjoining field, almost taking out a NAAFI van in the process.  The same day they  targetted Hamburg again and his entry reads 'Heavy flak and searchlights active with night fighter opposition.  Sustained direct hits on bombing runs, and badly crippled, port wheel hanging down, intercom and port electrics u/s. Attacked head on by night fighters one hour after leaving target, no hits observed.  Short of fuel, diverted to Stradishall.  Landed on one wheel, crashed and wrecked two huts and one more Stirling.  Aircraft written off - crew minor injuries'.  The wireless operator Sgt. A.J. Rhodes received an immediate D.F.M. for his part in the raid and the pilot, Flying Officer R. Whitworth, a D.F.C..  A photo taken by the 90 Squadron official photographer of the stricken Stirling 'Alexander the Great' and its crew, taken  on return from the raid, has been glued in the log. With Whitworth, their regular pilot injured, the crew flew with a new pilot for the next couple of months.  The next two Ops were to Turin during which they had a confirmed 'kill' of a Fw190 and narrowly avoided an air collision with a Halifax.   On 17th they attacked the V-1 rocket site at Peenemunde, experiencing intense flak and fighter opposition and witnessing many aircraft bing shot down. He records this as 'one of the most important raids of the war'.  It appears that in September 1943 their 'replacement' pilot crashed and destroyed a Lancaster at Woolfox Lodge and with the crew unfit for flying duties, they were employed on a local farm helping with the harvest - see. the photograph glued in to log.  At the beginning of October 1943 their regular pilot, F/O R. Whitworth, returned for duty and Ops including Kassel and Bremen (terrific enemy opposition, attacked by two Ju88s, saw F/O ken Yates in 'Y' Yorker going down in Flames).  In November they attacked Mannheim and Leverkusen when they experienced engine trouble and the rear turet caught fire.  During December they were attached to 138 Squadron and flew supply Ops to Blida in North Africa, delivering Polish saboteurs and equipment.  During this period Forester describes being shot at by 'innacurate British flak.' On January 18th 1944 he was commissioned and on the 21st they attacked Cherbourg (he records that the mid upper turret perspex shot away).  At the end of the month and into February they undertook more minelaying Ops.  In March they bombed the marshalling yards at Amien, Laon, when he reports that the 'port inner engine caught fire and shot at by British flak' and Aulnoye.  Other Ops include the railway at Coutrai and  Special Maquis supply drops in Southern France/Lower Alps. His tour ends on 18th April 1944 with a minelaying Op in Kiel bay where they lost one engine and returned to base on three.   In October '44 he was posted to 1668 HCU, Bottesford, Lincolnshire on Lancaster IIs and then in June 1945 to 51 Squadron, Leconfield, on Stirling V and Halifax VI bombers.  The last recorded entry is as a passenger in a WACO glider on October 1945.  This log would appear to be Forester's second copy although it is officially signed off each month by him and the Comanding Officer so must have been written up at the time.  Superbly detailed and has period photographs inserted in appropriate places.  A fabulous log book worthy of additional research.  Stock code P23489. 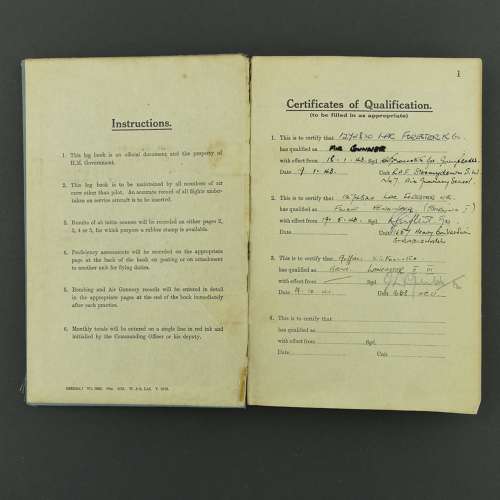 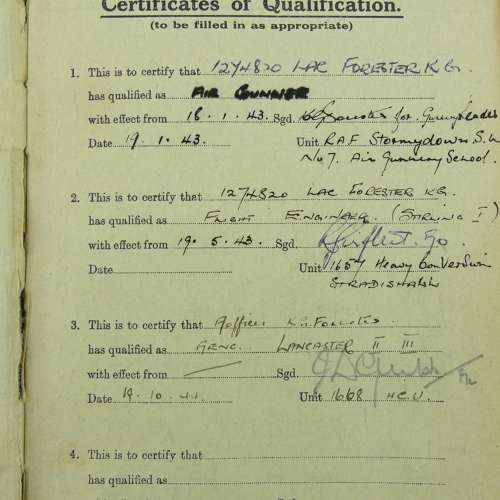 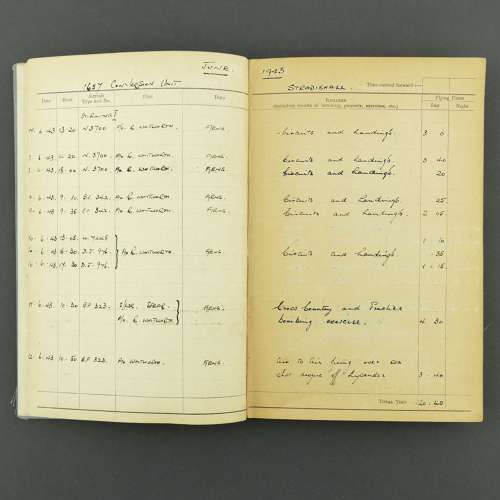 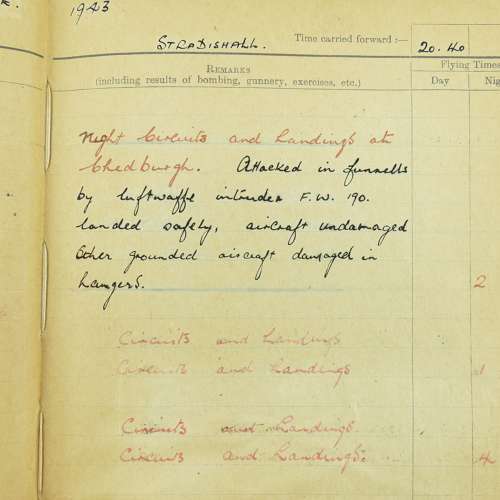 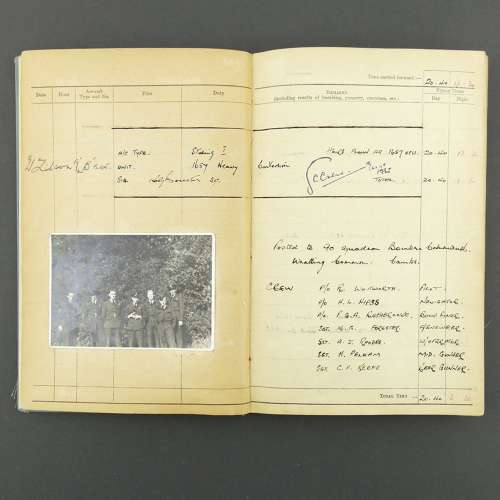 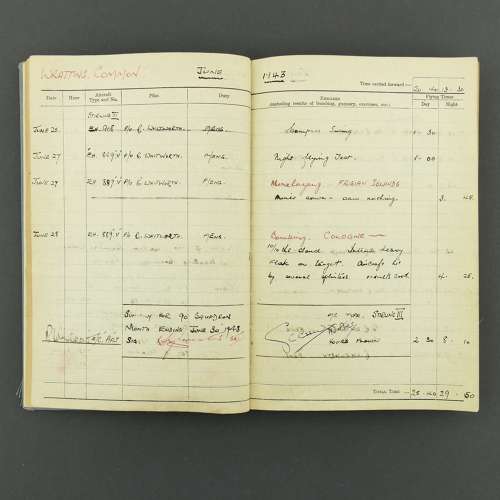 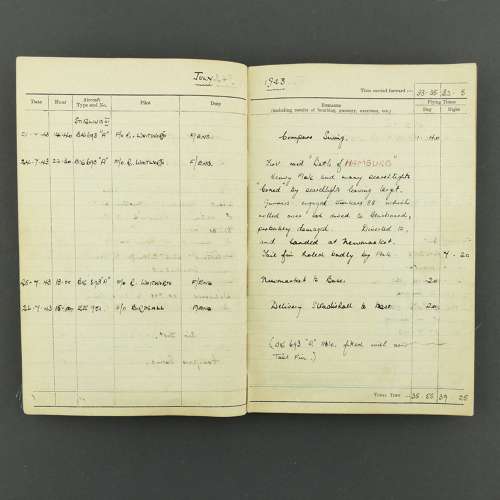 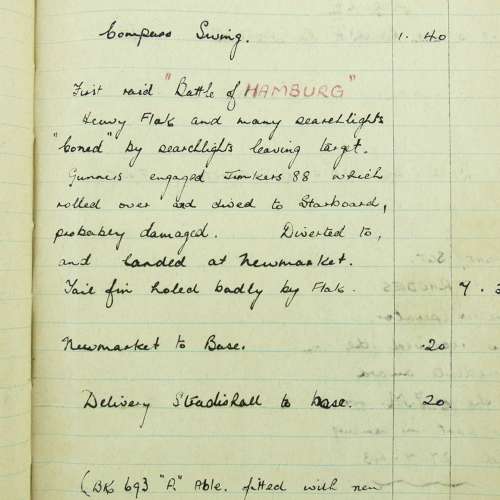 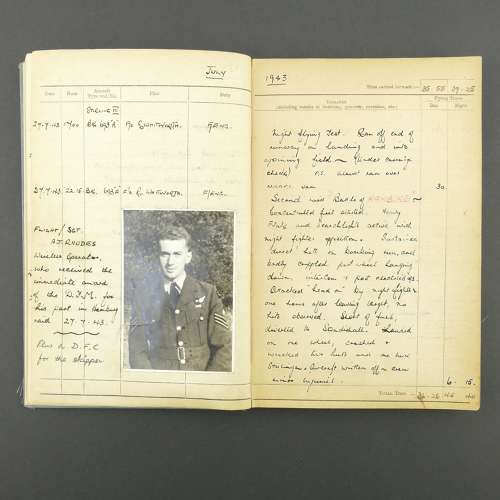 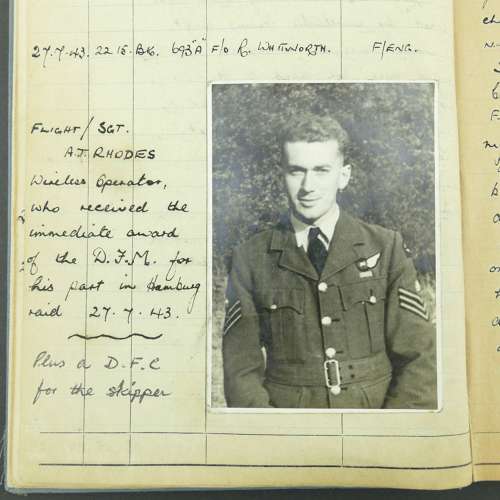 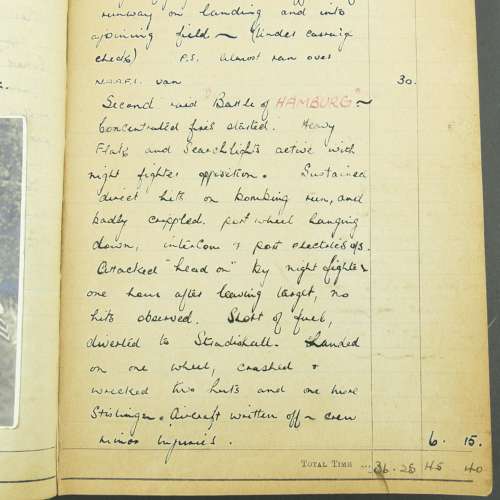 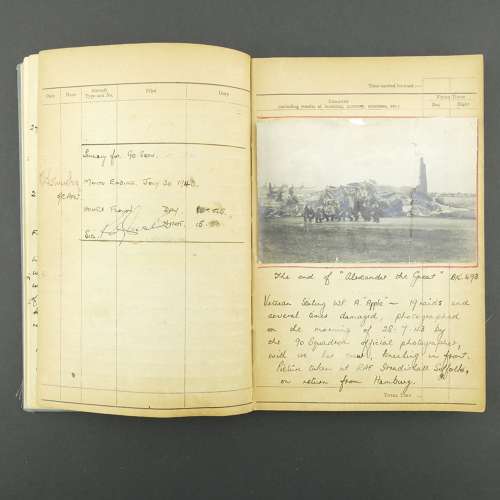 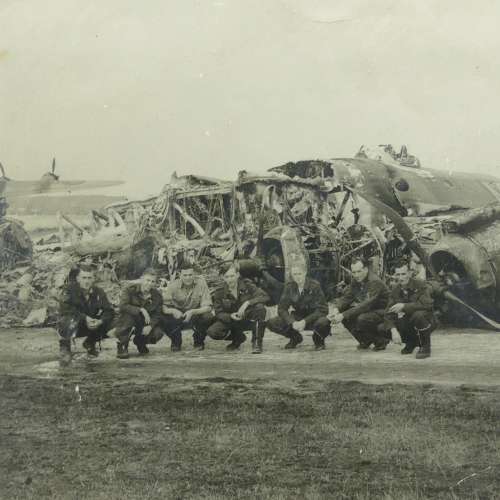 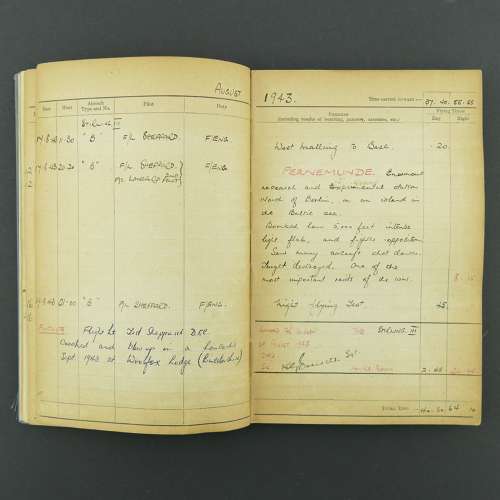 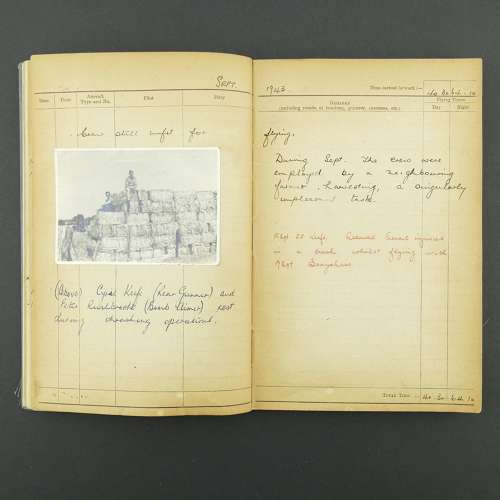 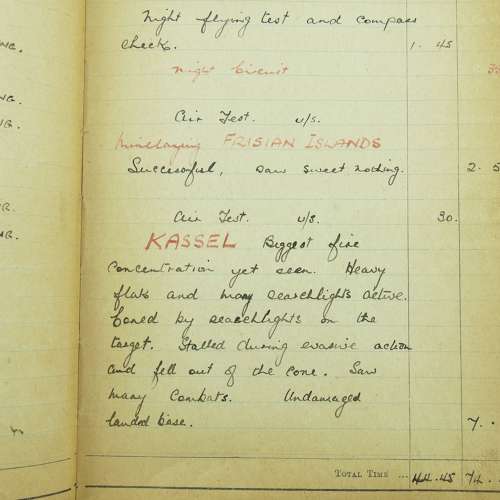 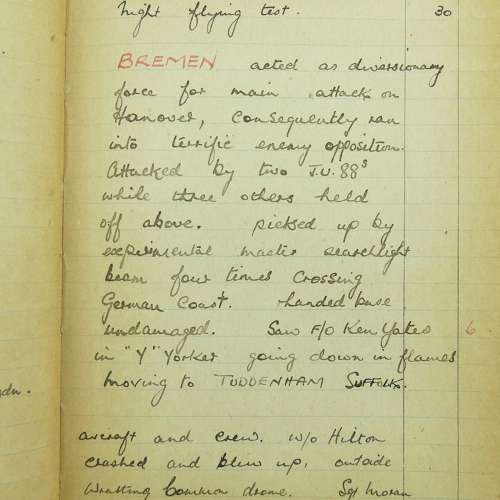 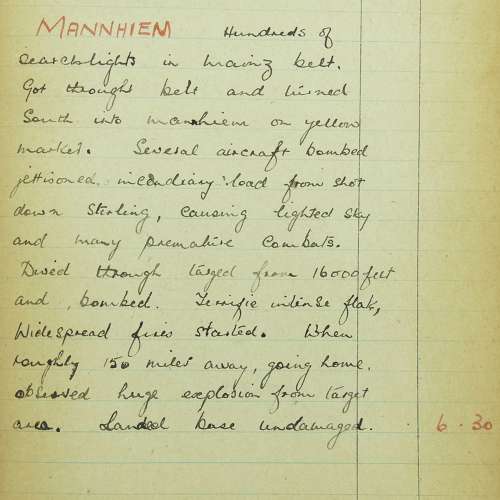 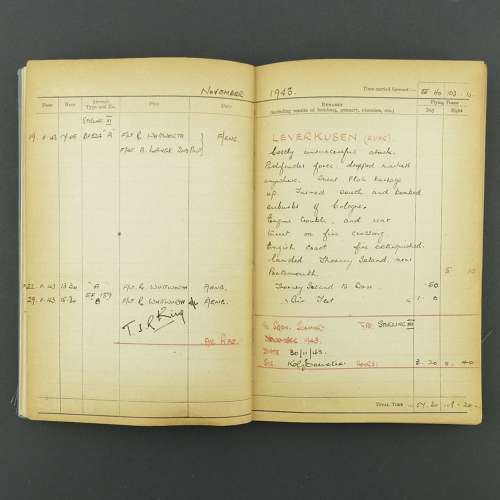 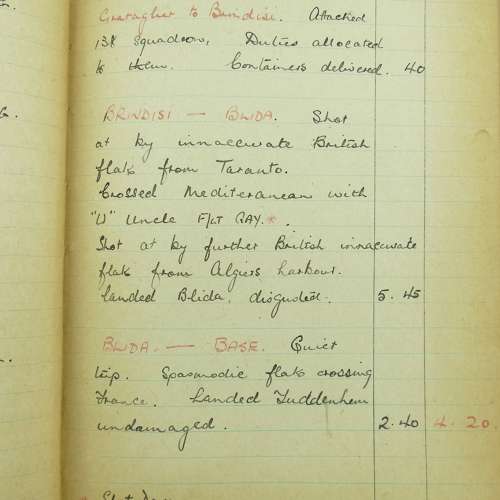 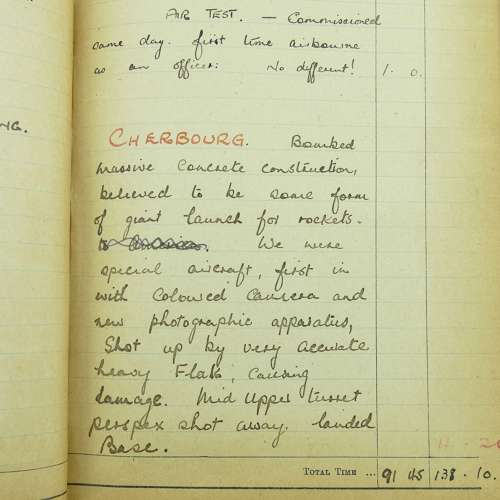 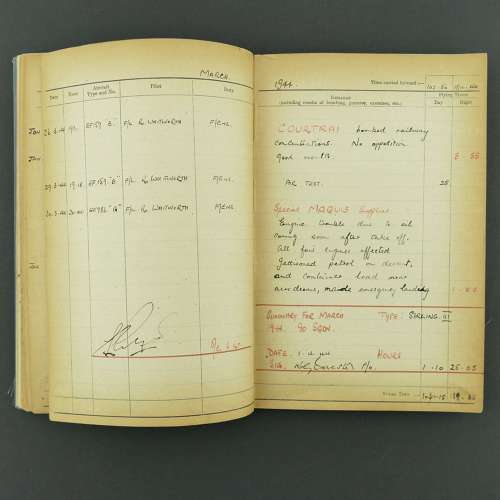 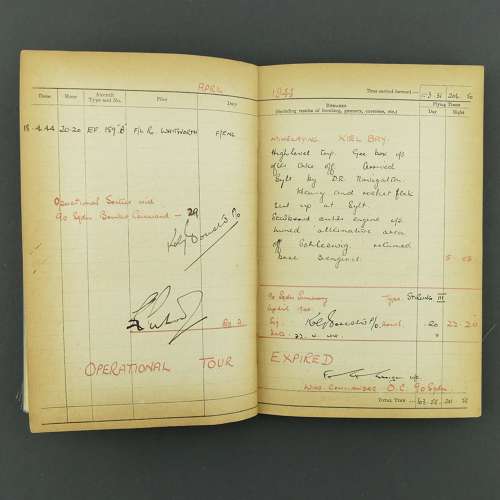 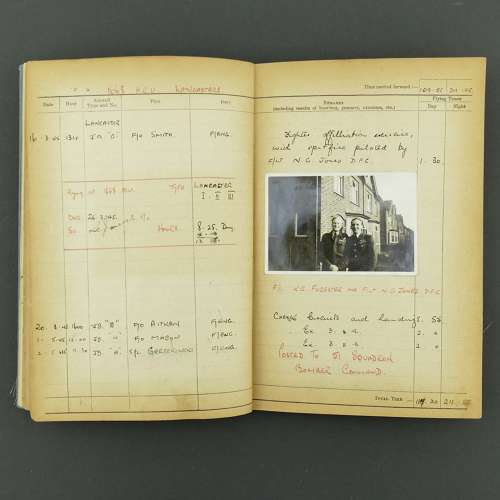 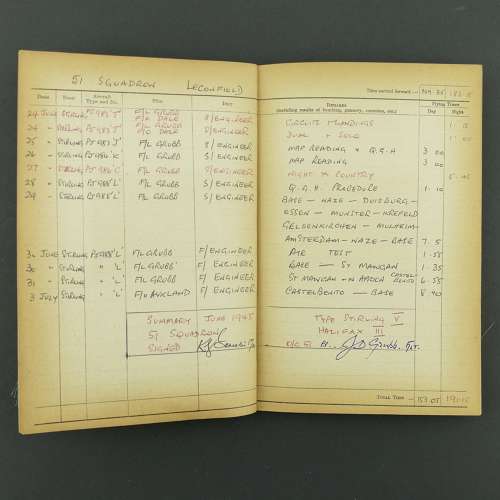