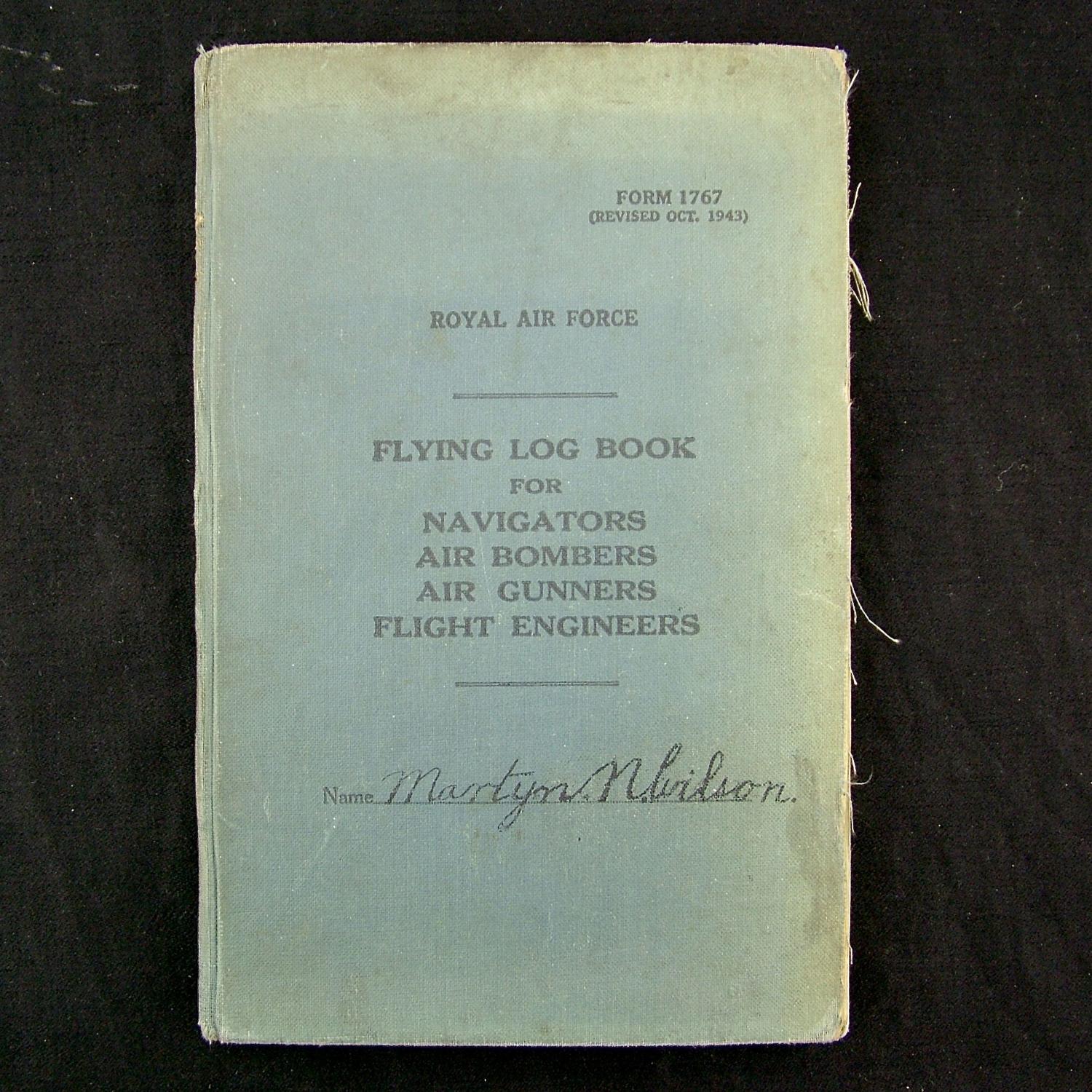 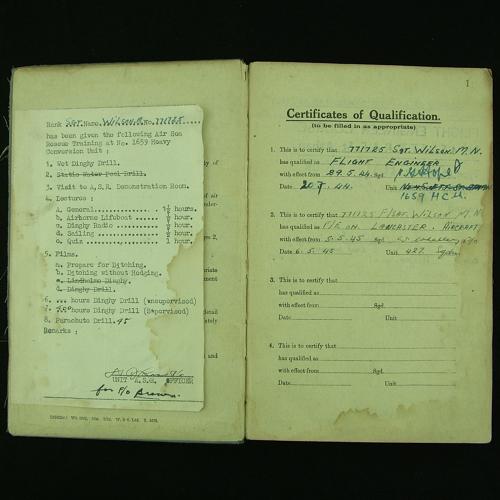 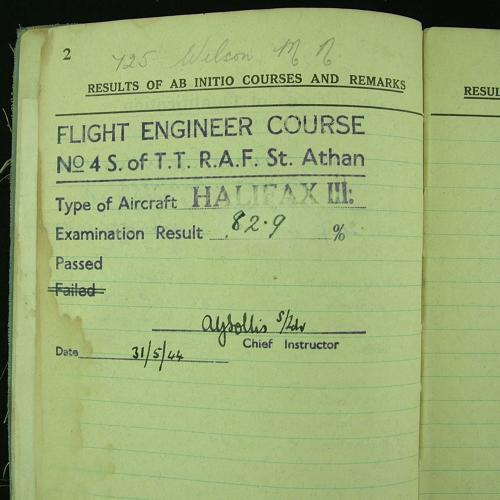 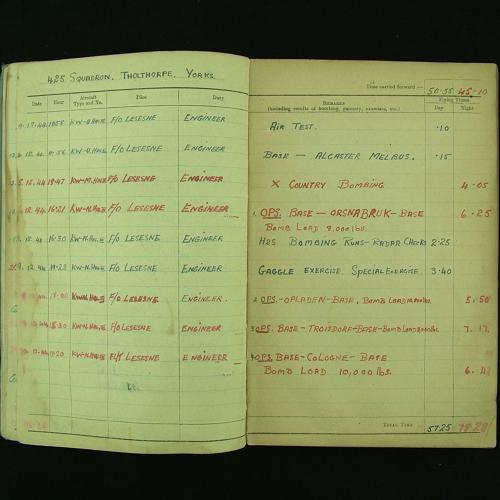 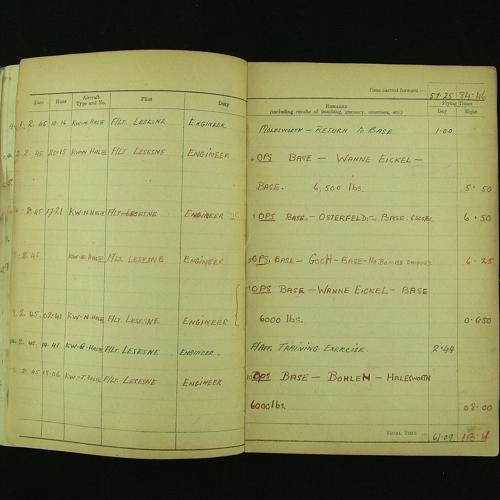 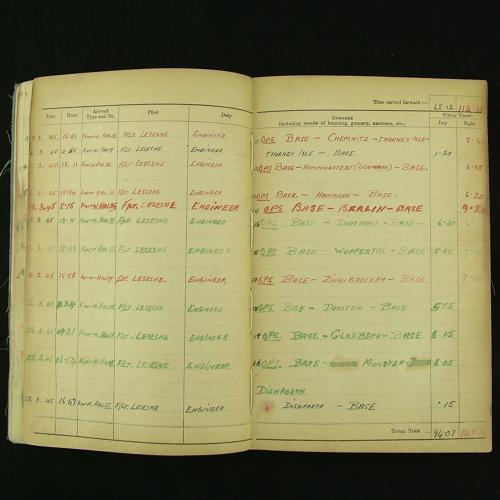 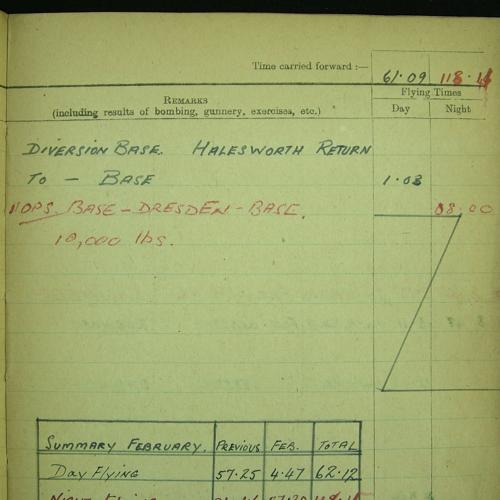 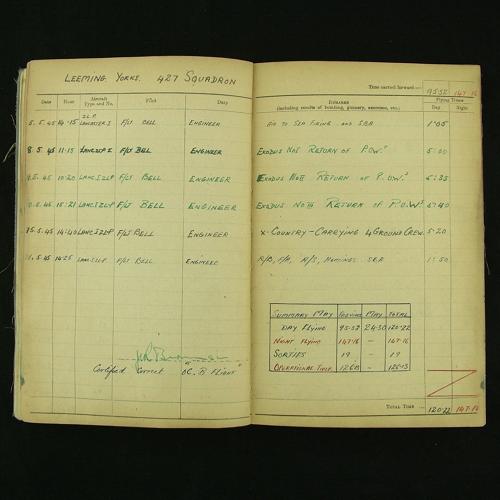 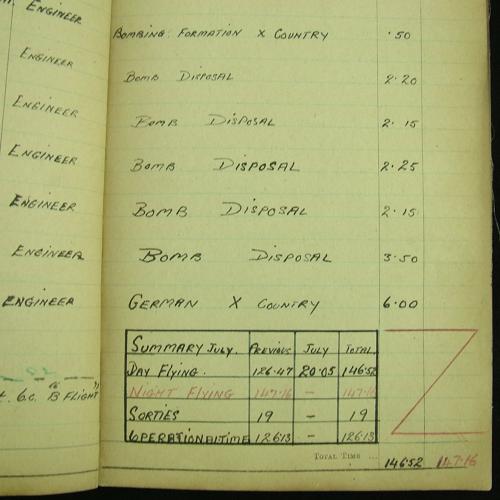 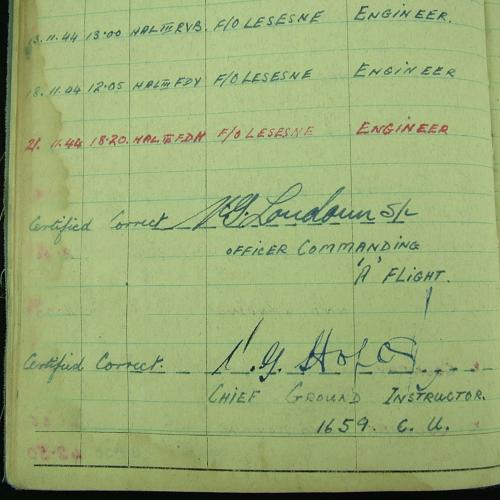 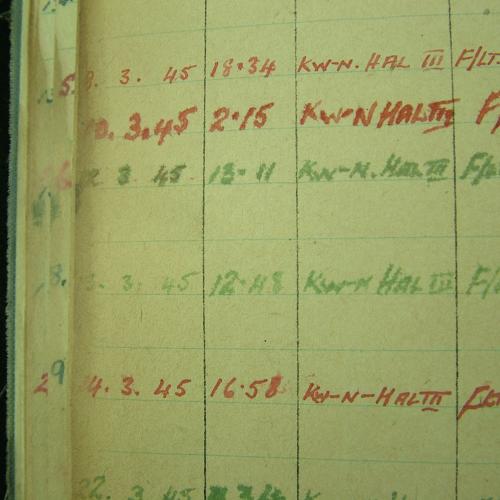 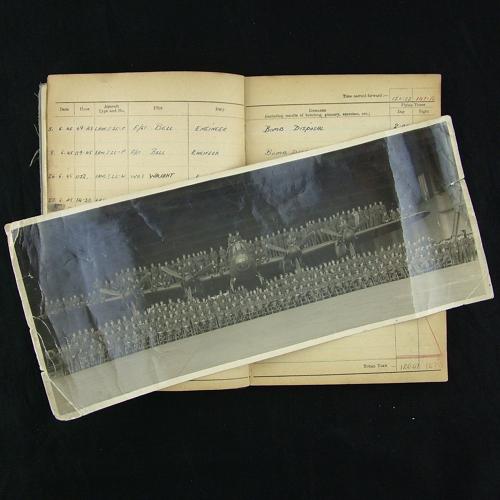 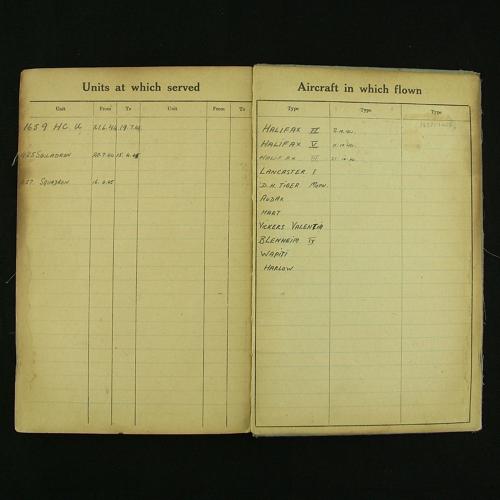 Flying log book to Flight Sergeant Martyn N. Wilson (771725), a Flight Engineer (FE) with 425 Squadron.  It begins with training at the FE course at No.4 School of Technical Training at R.A.F. St. Athan on Halifax bombers c. May 1944.  He was then posted to No.1659 Heavy Conversion Unit  at Topcliffe in Yorkshire and on 4th December 1944 to 425 Squadron, Tholthorpe, Yorkshire.  Two days later he flew his first operational flight to Osnabruck.  This was the first major raid on the city since late 1942, several munitions factories were destroyed but the railway marshalling yards were only partially damaged. Three further Ops to Opladen, Troisdorf & Cologne were completed by the end of the month. Wilson's fifth operational sortie was to Stuttgart on 28.01.45, the last major raid on the city.   His 11th Op on 14th February was part of the infamous 'Operation Thunderclap' raid targetting  Dresden.  This created a firestorm completely burning out large areas of the city and killing in excess of 50,000 people. Although Winston Churchill was party to the planning of the raid, he later tried to distance himself.   The next Op to Chemnitz (5.3.45) continued Thunderclap.  It started badly when nine aircraft of 6 Group crashed near their bases soon after take-off.  On 12th March the Squadron attacked Dortmund as part of the biggest raid against a single target with 1108 aircraft taking part.  Other raids undertaken targetted Berlin, Wuppertal, Zweibrucken and  Dorsten etc.  By the end of the war he had completed 21 operational sorties and was posted to 427 Squadron at Leeming, Yorkshire on Lancasters where he took part in exodus missions to repatriate P.O.W.s.  In June/July 1945 he flew on some bomb disposal missions.  The log ends in October '45.   It is signed off at the end of each month by Wilson and his commanding officer and has a few official stamps.  It comes with a squadron photograph (29.5 x 12cm, c.1946) taken at Leeming Bar, Yorkshire.  All the crews can be seen in front of or on the wings of a Lancaster.  A note on the back identifies Wilson's position in the image.  The log  is a bit worn and there has been some fairly minor water damage at the edges.  The photo is creased with edge tears. Note that Wilson has incorrectly numbered his Ops - he states 20 but there are 21 recorded.  An interesting late war log worthy of further research.  Stock code P17408.