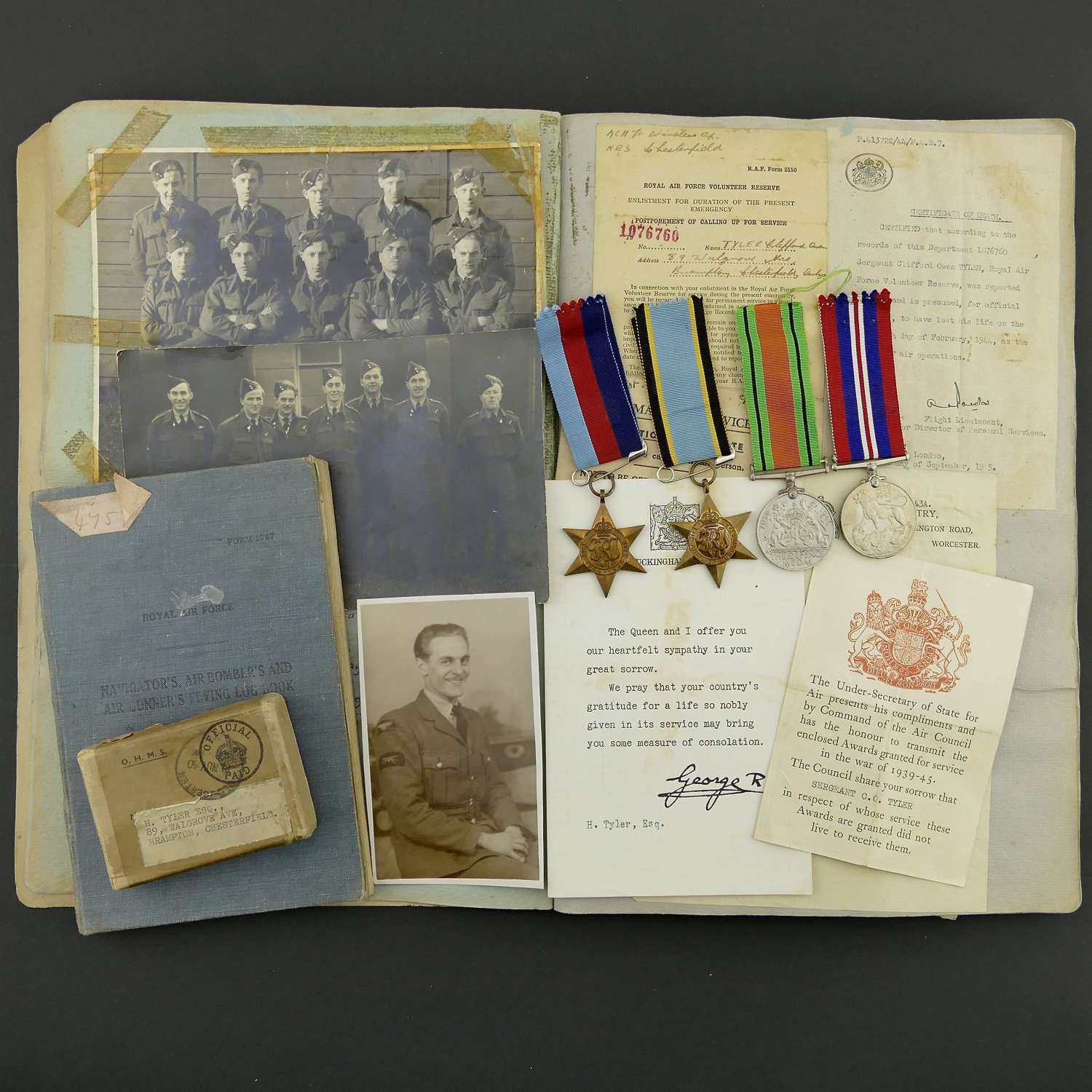 Log book grouping to Flight Sergeant Clifford Owen Tyler RAFVR (1076760), a wireless operator / airgunner with 77 squadron.  Covers the period from November 1942 to January 1944.  He trained at No.8 Air Gunnery School Evanton (Scotland) and No.2 Radio School (Yatesbury), on Dominies and Bothas followed by No.21 Operational Training Unit (OTU) Moreton In Marsh on Ansons.  In May 1943 he was posted to 'E' flight 21 OTU at Enstone as a wireless operator on Wellingtons and then to 310 F.T.U / 23 OTU at Harwell (Oxon).   In October 1943 he was posted to 1658 heavy conversion unit Riccall, Yorkshire, on Halifax IIs, before moving to No.77 Squadron, Elvington just prior to Christmas of 1943.  Operational sorties began 20.01.44 to Berlin - this raid was comprised of 769 aircraft  of which 4.6% were lost, largely to night fighters.  Tyler's crew returned to base before reaching the target.  The next night he was on Ops again, this time to Magdeburg on what was the first major raid on the city.  A force of 648 aircraft were involved but again they were intercepted by night fighters over the North Sea and 8.8% were lost in total.  Indeed Tyler's log notes that his aircraft was 'attacked by Me110 and Ju.88 - hits on both enemy aircraft claimed'.  The raid was not a success due to German decoy markers on the ground and poorly timed bombing, resulting in most bombs falling outside the city.   On 28th January they attacked Berlin again.  Bomber Command claimed this to be succesful with highly concentrated hits but German records suggest this was stretching the truth and much of the destruction was to civic properties.  Tyler records in his log 'Attacked by Me210 - hits claimed'.  At 1724hrs on 16th February 1944, Tyler's crew took off from Elvington for Ops to Berlin in what was the largest raid on the city and  largest 'non-1000 bomber' raid of the war. 891 aircraft took part and a record 2642 tons of bombs were dropped.  Unfortunately the Germans were able to plot the course of the raid and  heavy flak and night fighter attacks over the city resulted in the loss of 43 aircraft, 4.8% of the force.  Tyler's aircraft, Halifax II LW341 KN-D crashed in the Baltic with the loss of all on board : Pilot Warrant Officer A.F (Fred) Edmonds, Flight Engineer Sgt. Bernard (Bern) Coughlin, Navigator Flying Officer Richard E. (Dick) Padget RCAF, Bomb aimer F/Sgt. J.J.O.N. (Jack) kennedy, Wireless Operator F/Sgt. Clifford Owen Tyler, Mid-upper gunner F/Sgt. N.L. (Happy) Newell RAAF and Rear gunner F/Sgt. R.W. (Ray) Wheeler.   F/Sgt. Newell is buried on the Danish island of Lolland in Kappel churchyard but the rest of the crew have no known graves.   F/Sgt. Tyler (23), son of Herbert and Edna Tyler of Brampton, Chesterfield, Derbyshire is commemorated on panel 239 of the Runnymede memorial.  The final entry in his log is an official 'Death Presumed' stamp.  The log is properly filled out, has various official stamps, a pasted in certificate regarding parachute/dinghy drillls and is signed off by the commanding officer.  With the log are his medals, posted to his father shorlty after the war.  These include the 1939-45 star, Aircrew Europe star, Defence and War medals plus named compliments slip and named/addressed box.  All are unworn and complete with ribbons.  In addition there is a large scrap book relating to Tyler and his family.  Lots of paperwork is glued/placed within this but the order is not chronological and appears to have been assembled quite randomly.  However, items relating to Clifford include a letter from his headmaster c. 1935 recommending him as 'thoroughly reliable and trsutworthy'; RAF form 2150 postponing his call up for service c. October 1940; his RAF innoculation certificate c.1943; a birthday card he sent to his mother in 1944;  a photograph of various aircrew trainees (including Tyler); a photo of his crew (all named on the reverse); another of him in uniform; a handwritten letter on RAF headed paper from Clifford to his parents and sister dated 14th February 1944 - just 2 days before he was killed; a letter to his mother from the Air Ministry dated 16 March 1944 officially advising  that Clifford was missing in action; an Air Ministry certificate of death dated 27th September 1945; a standard letter to his father from Buckingham Palace regarding Clifford's  death; the Order of Ceremony for the unveiling of the Runnymede Memorial by the Queen dated 17th October 1953 along with two tickets for the event.   Other items in the scrapbook relate to Clifford's father including his National ID cards c.1943 and 1949, a speeding conviction, certificate of service in the National Fire Service  between 1939 & 1946, various newspaper and seemingly random clippings etc.  Unfortunately much is glued in such that the reverse of letters and documents can not be seen.  An interesting and poignant log book grouping to a young wireless operator lost on his 4th operational flight.  Worthy of more research.  Stock code P24172. 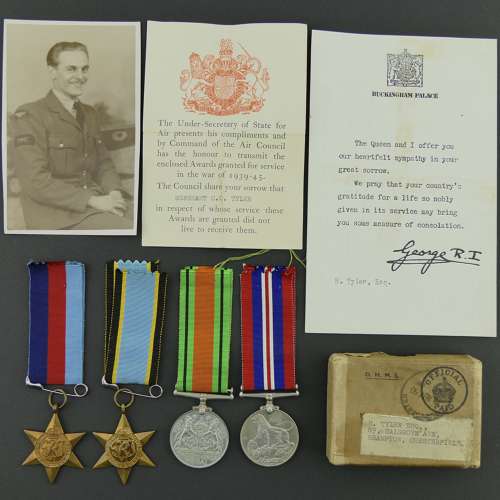 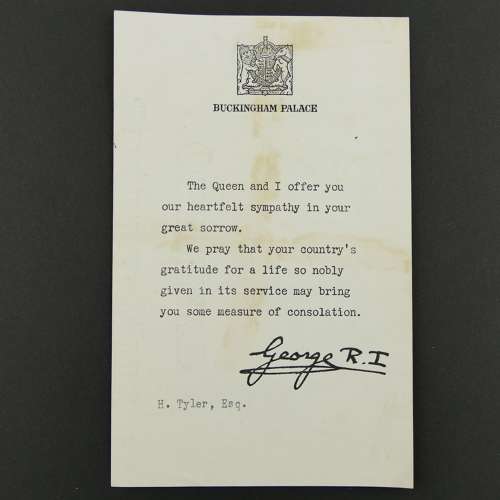 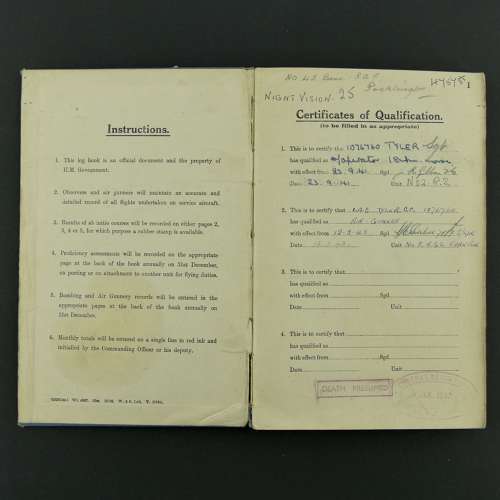 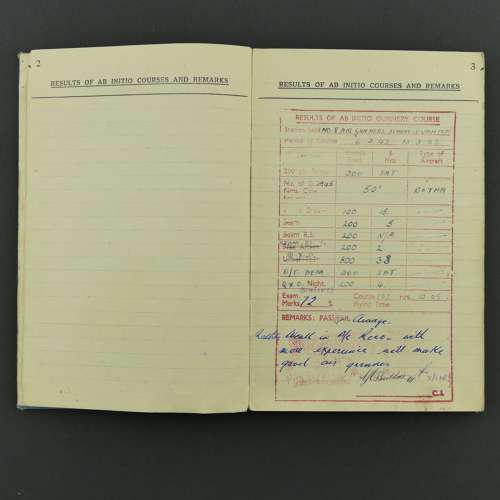 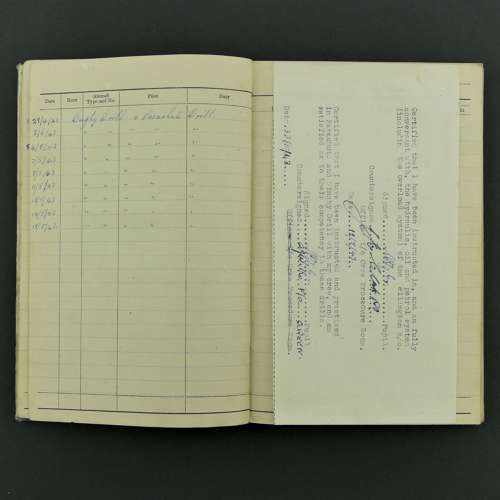 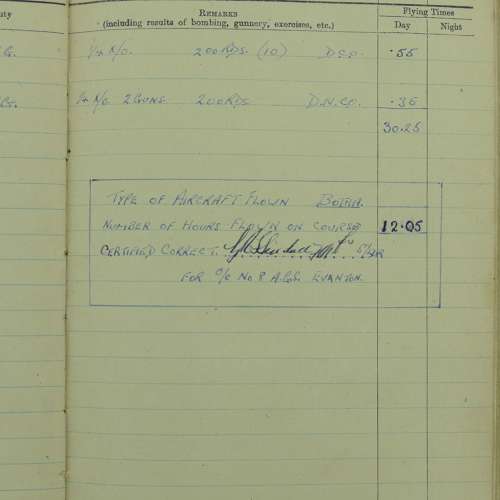 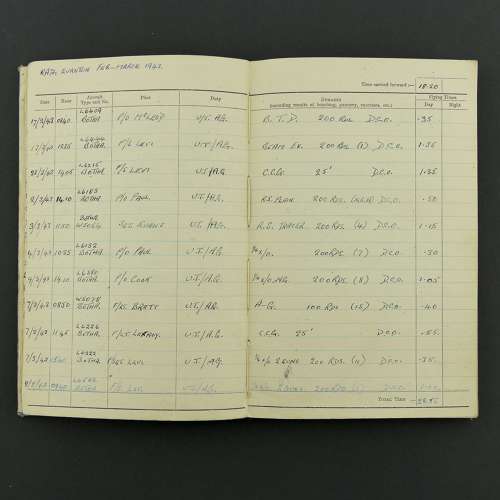 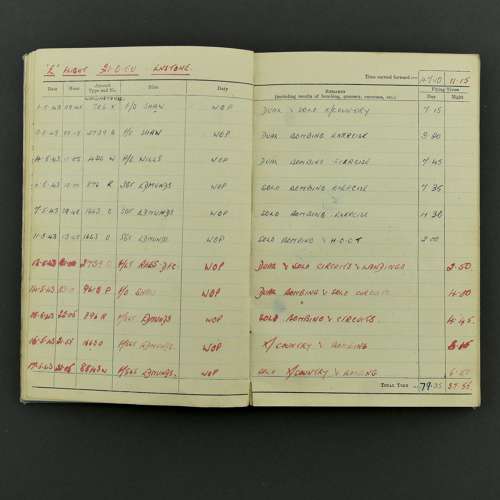 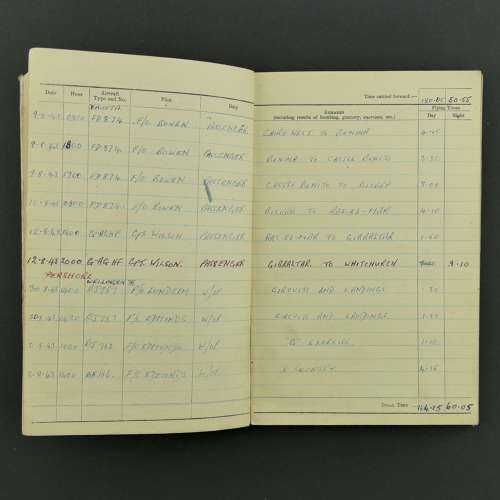 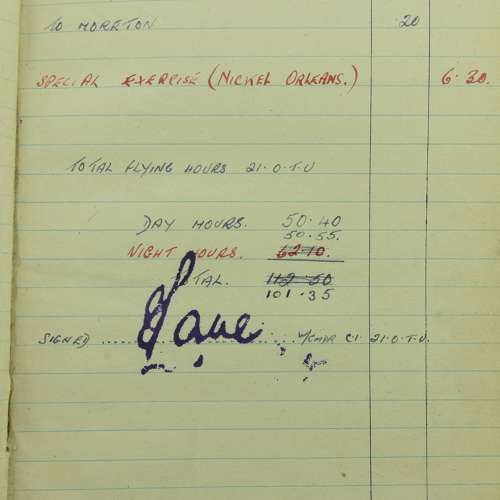 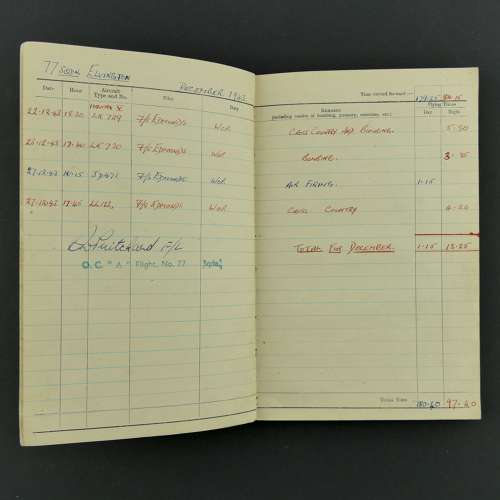 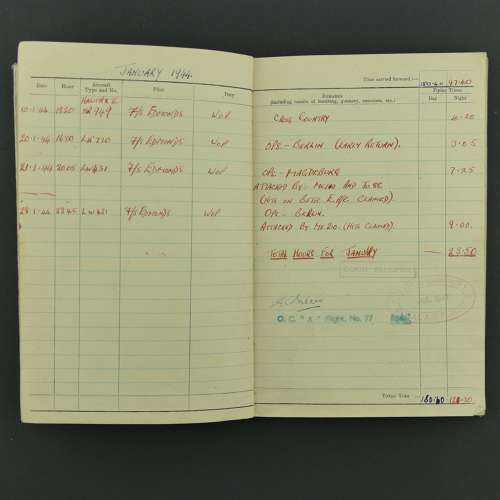 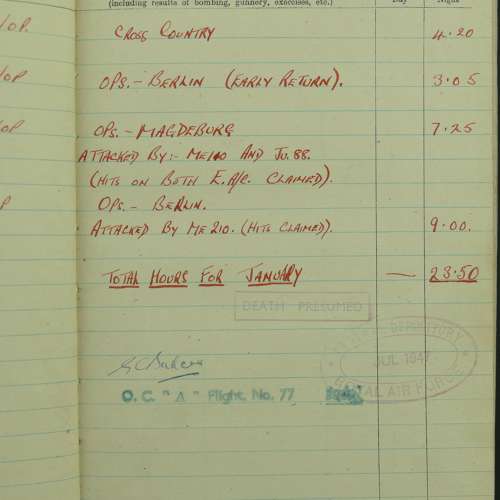 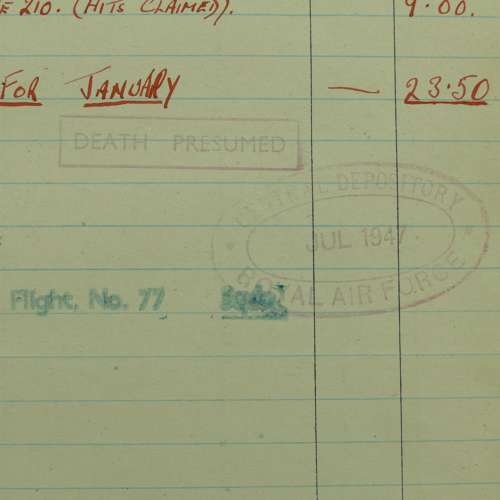 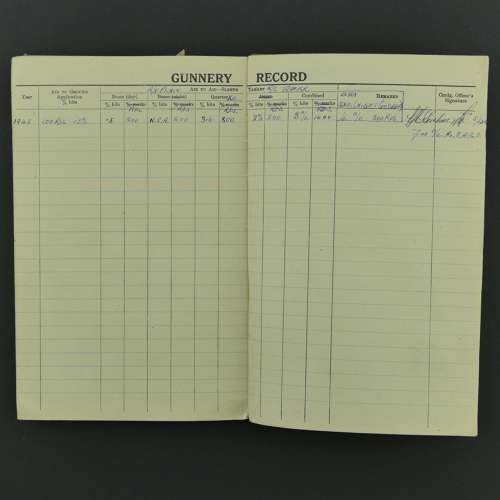 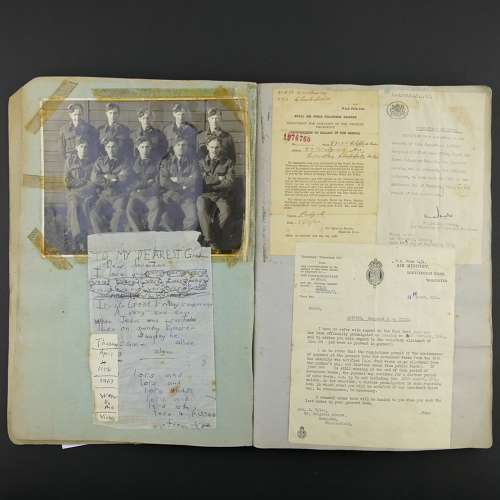 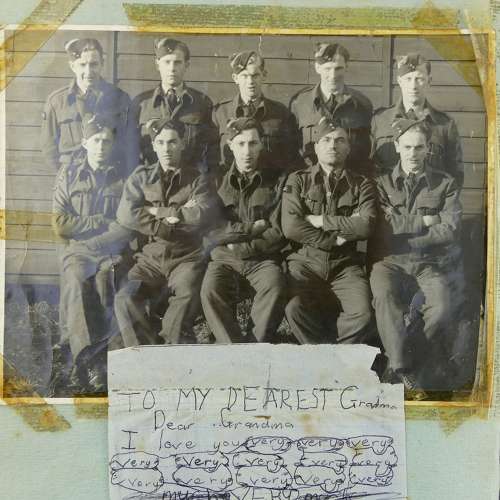 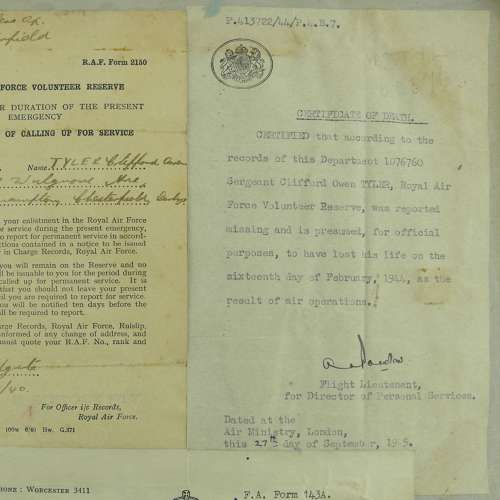 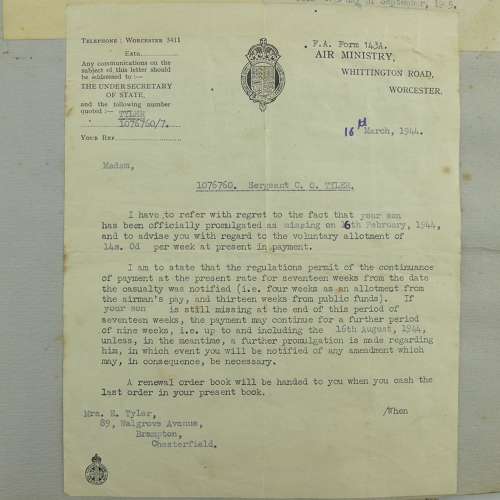 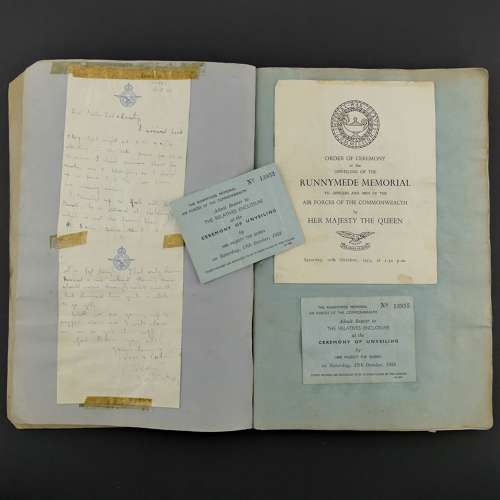 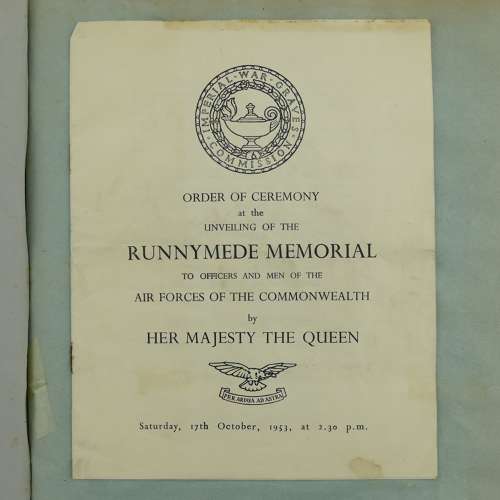 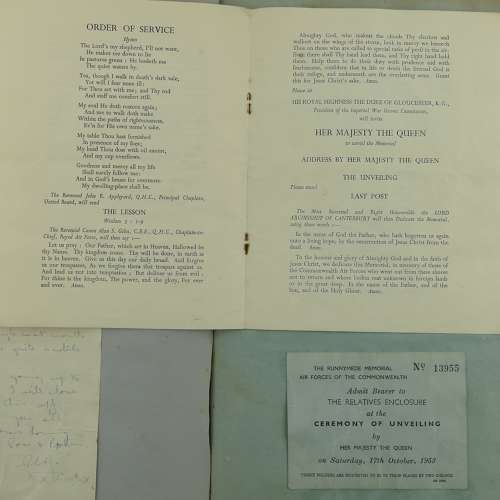 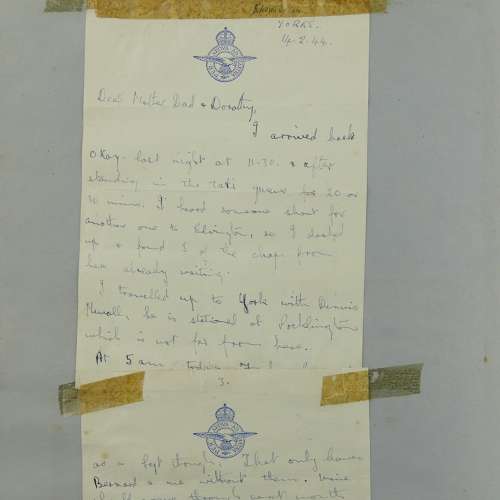 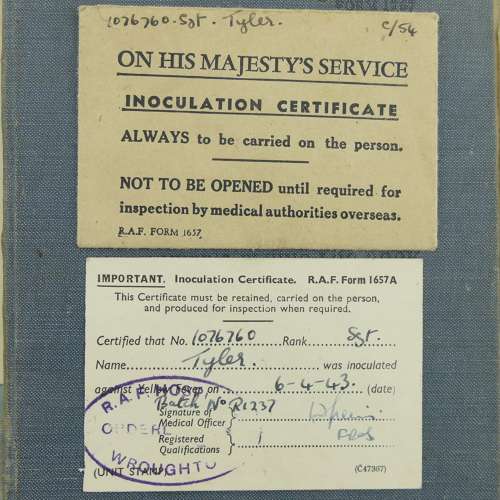 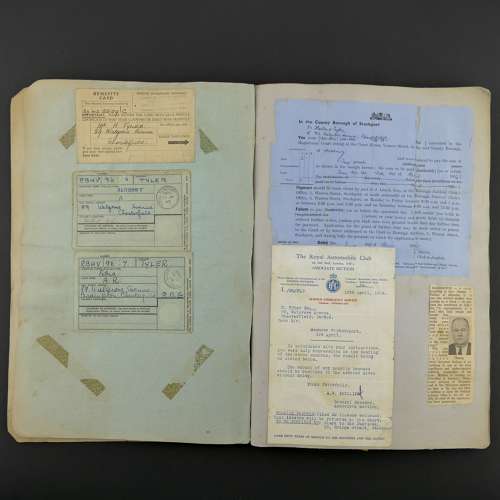 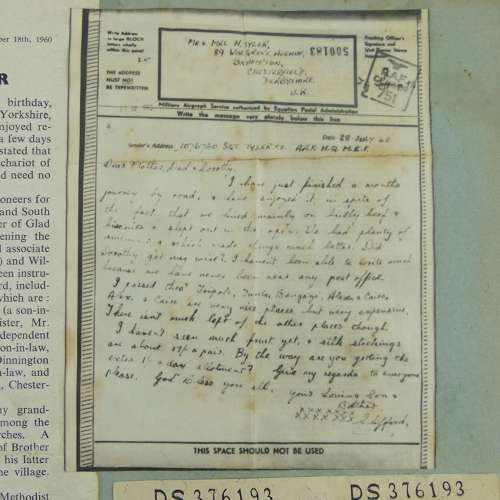 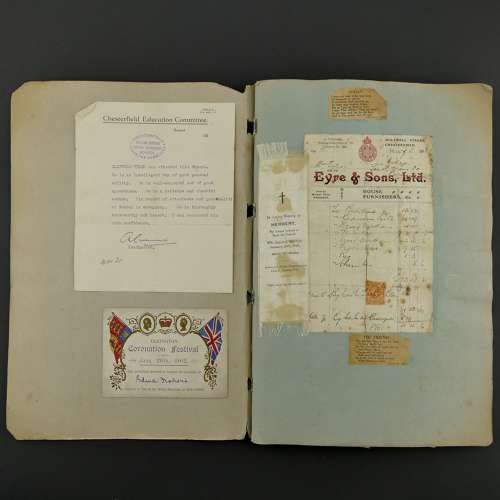 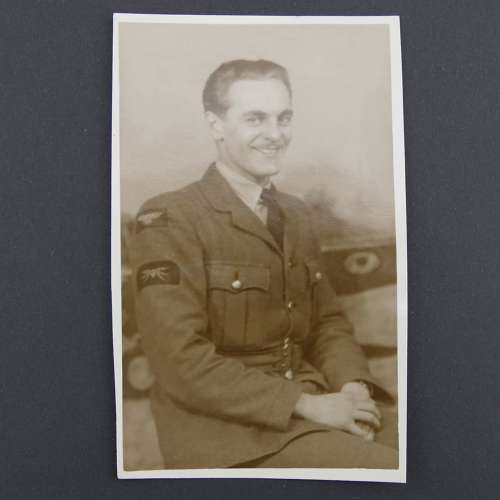 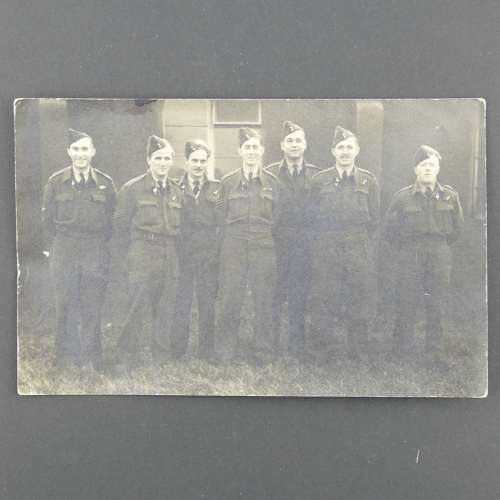