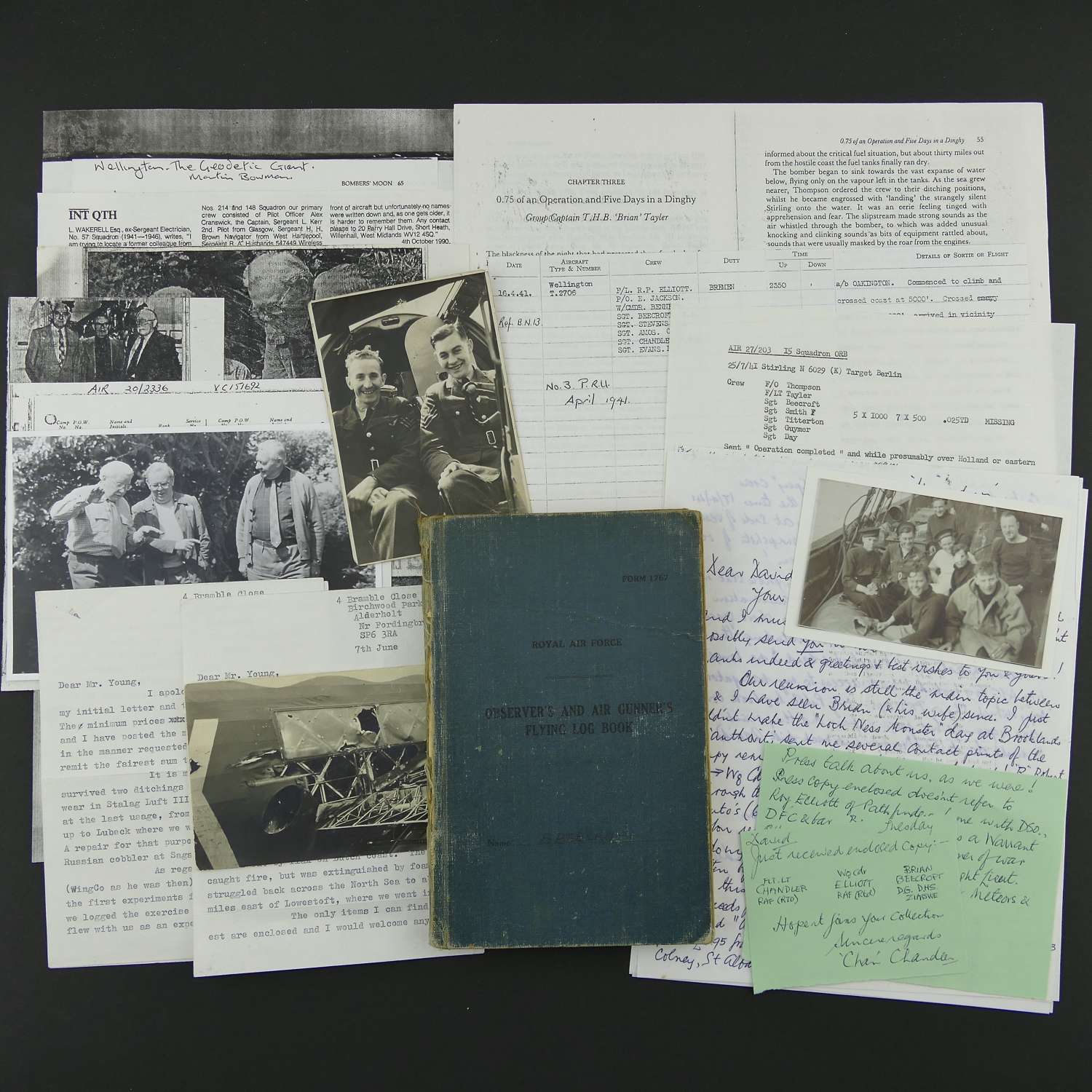 Log book and paperwork to air navigator Sergeant Brian D. Beecroft RAFVR (745643) covering the period between 1st April 1940 and 8th May 1945. He attended No.11 Air Observers Navigaton School, Hamble, between March and June 1940, passing the course on 29th. The log begins with training flights in Ansons followed by Fairey Battles and Hawker Demons with No.9 Air Observers School at RAF Penrhos where he undertook a bombing and gunnery course.  By September 10th he had been posted to 15 O.T.U at Harwell, Oxfordshire on training flights, mainly as a navigator and bomb aimer on Wellingtons.  He remained there until 8th November 1940  before posting on 7th December, to No.3 Photo Reconnaissance Unit (PRU) at Oakington, Cambs.  Operational flights commenced on 4th February 1941, the target Brest, dropping 500lb general purpose bombs (GP) and taking reconnaissance photos.  Three similar operations to Hanover, the Ruhr valley and Dusseldorf followed during the same month. On 18th March they flew to Bremen but failed to reach the target.  Late the same day they flew between Abingdon and their base  but crash landed at Bisney.  On 7th and 8th April he flew sorties to Kiel and on 17th they targeted Bremen again.  During this flight the starboard engine was hit by flak over the Dutch coastline, caught fire and although the fire was extinguished, the aircscrew fell off into the sea.  Unfortunately the pilot could not maintain height and they were forced to ditch in the North Sea 15 miles East of Lowestoft.  All but two of the crew manged to board the survival dinghy, they spent the whole time in the sea hanging on to the lines.  The dinghy was damaged during release from the Wellington and losing air so it must have been a great relief when they were circled by a PRU Spitfire and subsequently rescued by H.M.T. River Spey.  It is significant to note that Wing Commander Don Bennett of 'Pathfinder' fame accompanied the crew on that trip.  He had asked Group HQ for a unit well experienced with the use of flares (late in December 1940 with B-Flight 3PRU they had done trials in the Belfast area).  Bennett  selected Beecroft's crew for his initial experiments for 'Target Markers' and these are recorded in the log as 'Flash Trials' on the 2nd,4th and 8th May 1941. Iit would appear that these Flash Trials were the first Target marking attempts made.  Bennett joined the crew again on the last flight as an 'Expert Observer'.  Training flights continued for the rest of May, June and most of July until Beecroft was posted to 15 Squadron. The following day, 25th July, saw them undertake a fateful sortie to the German capital Berlin.  They took off from Wyton Cambridgeshire in Stirling N6029 LS-K but had problems on the return journey.  One report suggests that they were shot at by a Ju88 off the coast of Rotterdam causing significant damage to the fuel tanks which eventually meant they simply ran out fuel.  However, this raid was written about after the war by one of the crew and he states that they flew off course and subsequently ran out of fuel.  Whatever the cause, their experienced pilot, Flight Lieutenant F. Thompson (RAAF) successfully ditched the  stricken bomber in the North Seat at 0540hrs.  The crew immediately transferred to the dinghy, cold and miserable.  Although they spotted both German aircraft and some shipping, their crews failed to see the flares sent up and the crew had to endure 5 days at sea surviving on meagre rations consisting of one biscuit, two Horlicks tablet and a piece of chewing gum per day.  Eventually land was spotted and the dinghy safely drifted ashore at Haamstede on the island of Schouwen, off the Dutch coast.  They had been spotted by German troops who were ready to take them into custody.  Initially they were taken to a Luftwaffe base, given food and a change of clothes before being transferred to Amsterdam gaol for interrogation.  From there they were sent to POW camps, Beecroft ending up in Stalag Luft III where he spent the remainder of the war before being force marched 180 miles from Sagan to Milag Nord (Bremen).  The log comes with a good original photograph of Beecroft and one of his pilots.  Another shows damage caused by cannon shells to his Wellington when attacking Kiel in April 1941. There is an original ORB entry for the Berlin 'Op', a copy photograph of Beecroft and his crew aboard HMT River Spey (named to reverse) and letters sent to Michael Young, a long time avaition dealer who purchased the log directly from the veteran in the 1980s.  There is also a copy of the SRB and letters relating to Beecroft's first ditching incident sent to the previous owner by Roy Chandler, one of the crew involved.  Also a photocopy of the book chapter relating to the Berlin 'Op' and  finally there are copies of newspaper articles relating to a reunion of Beecroft and his crew.  A really interesting log book with 9 recorded 'OPs' but of more significant historical importance relating to trials for the Pathfinder force.  Stock code P23490. 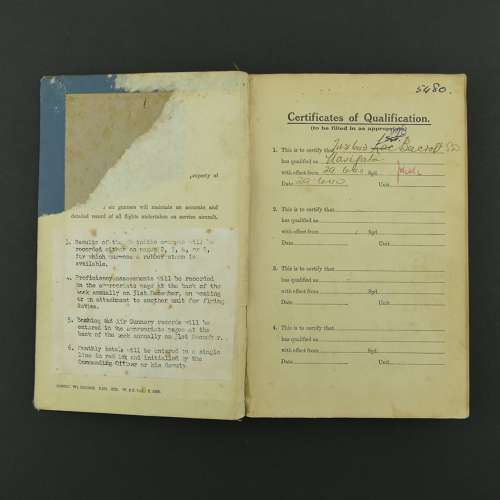 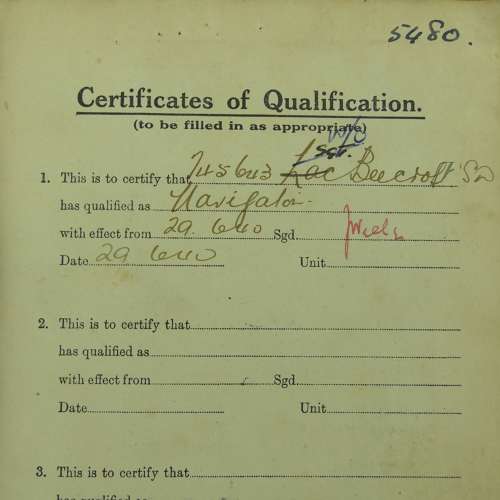 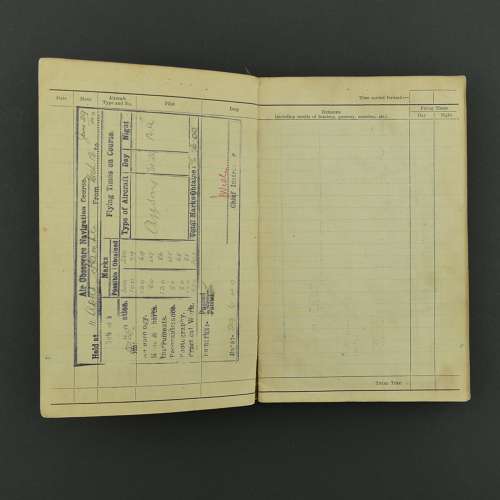 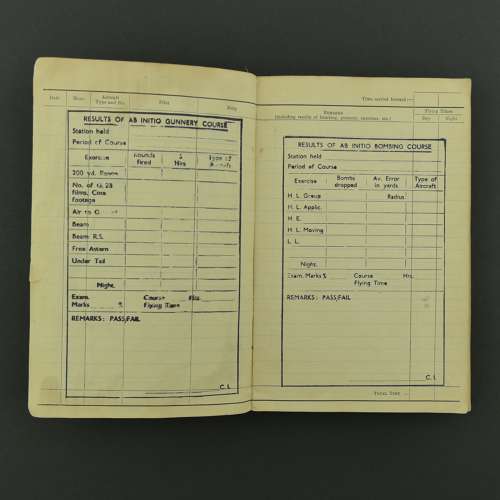 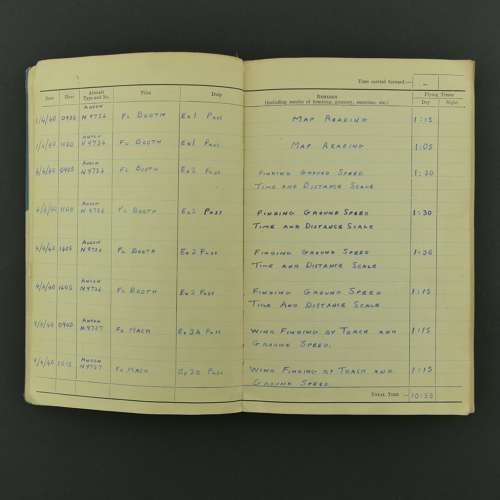 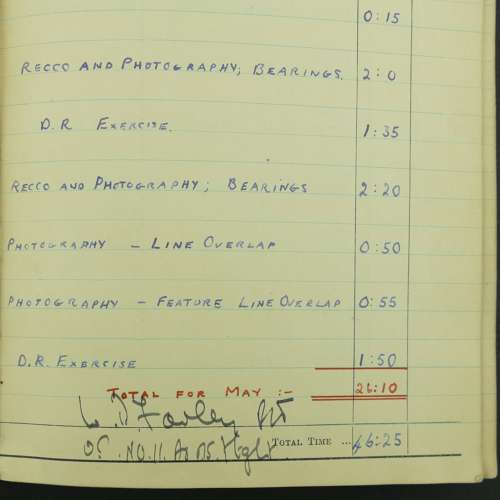 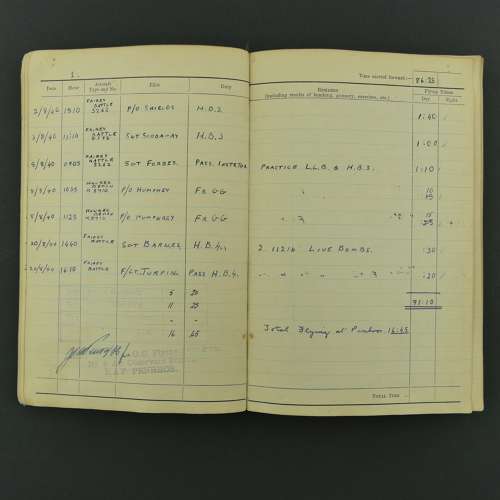 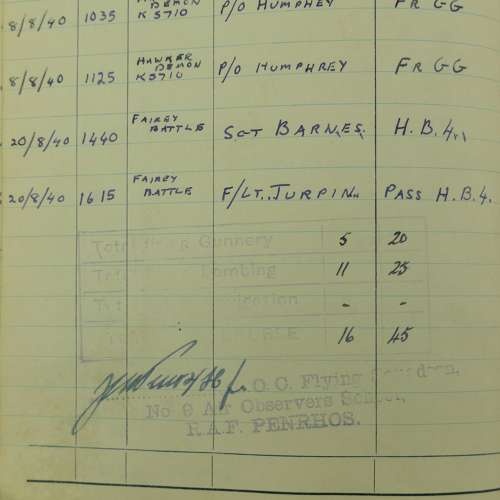 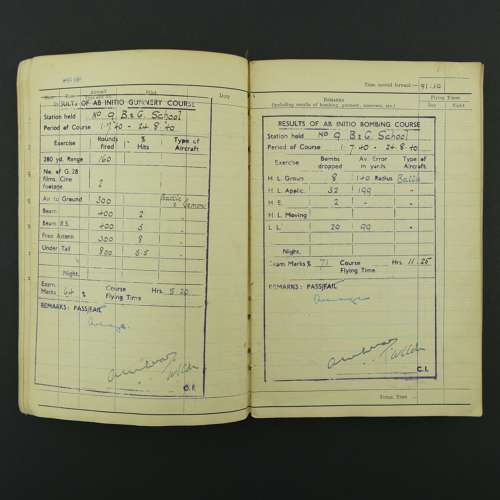 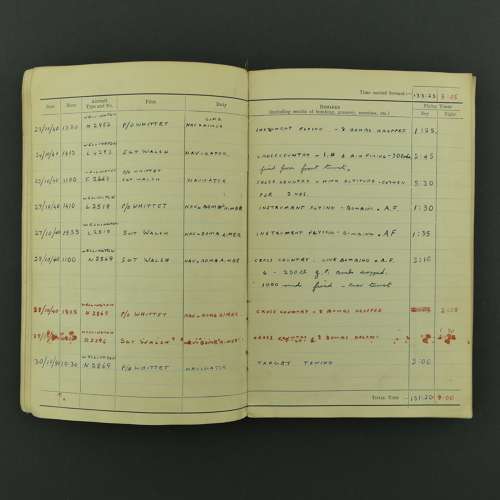 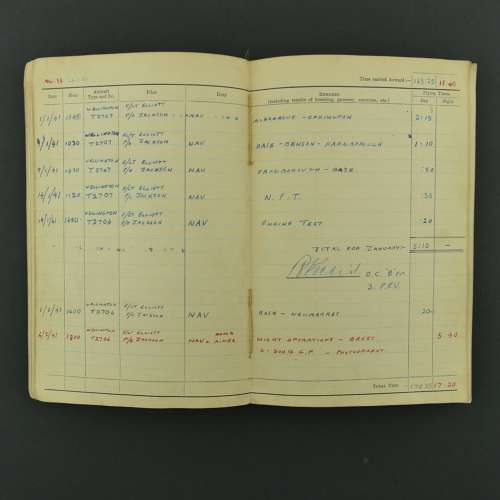 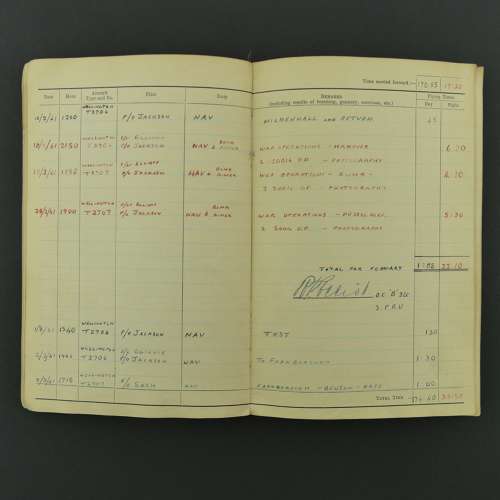 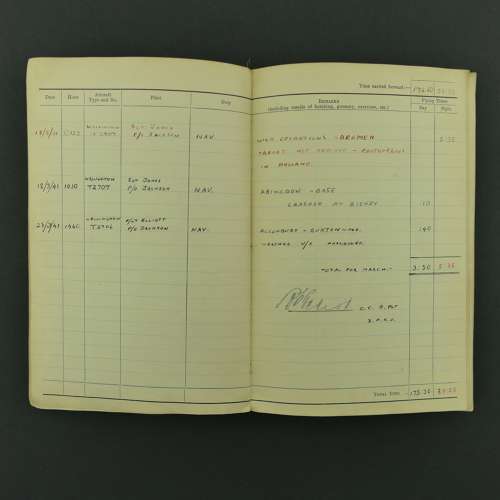 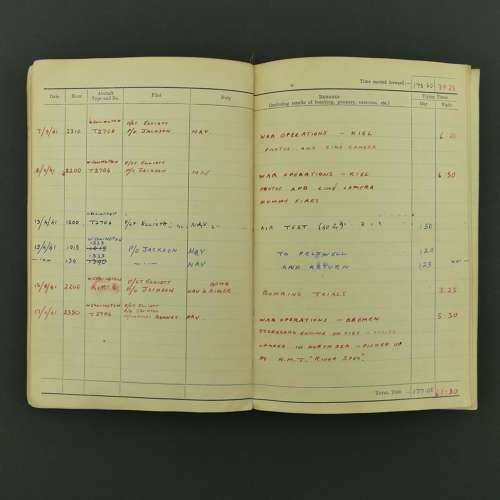 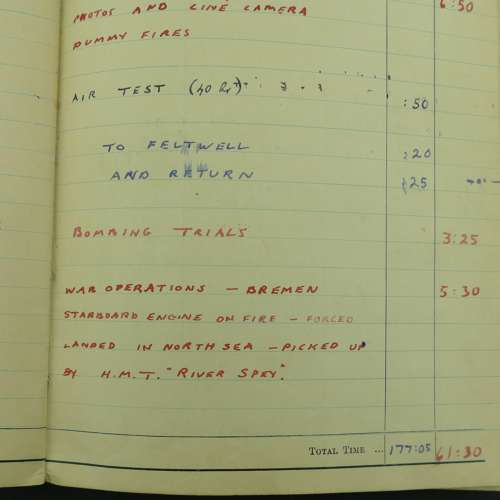 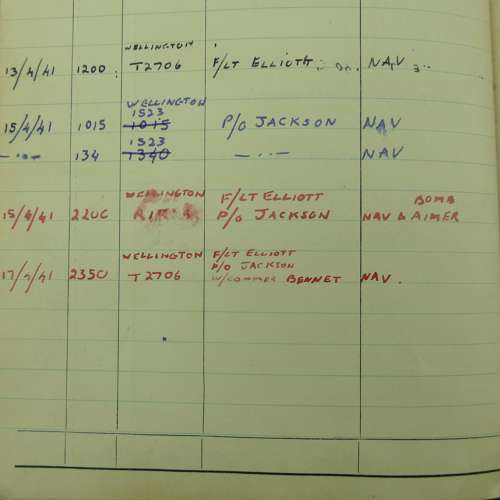 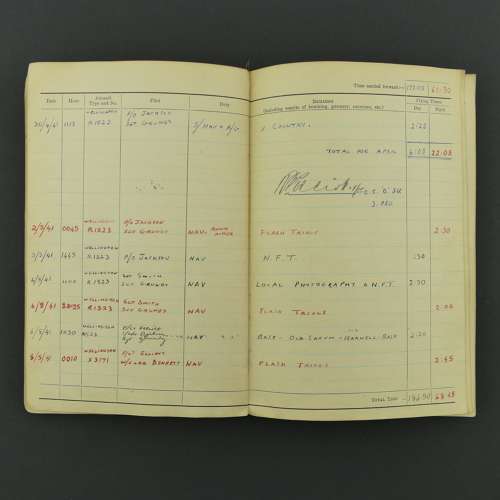 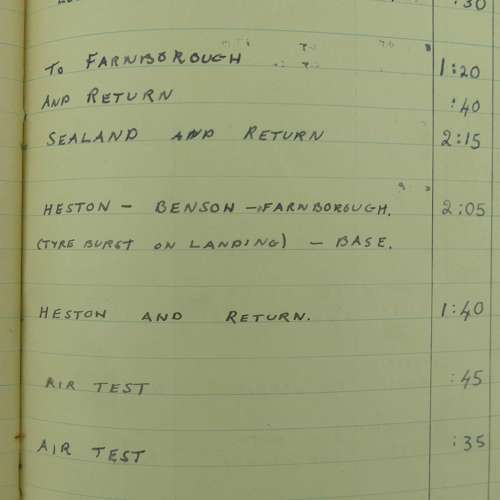 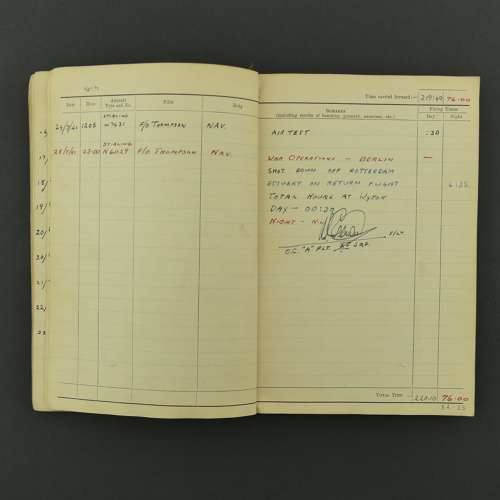 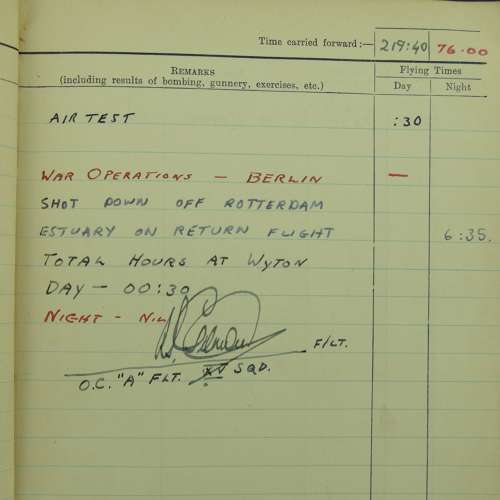 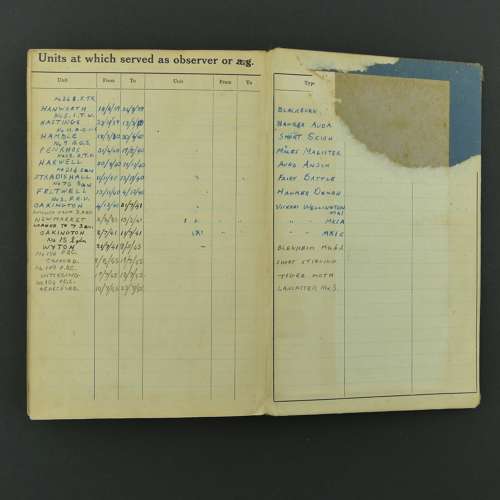 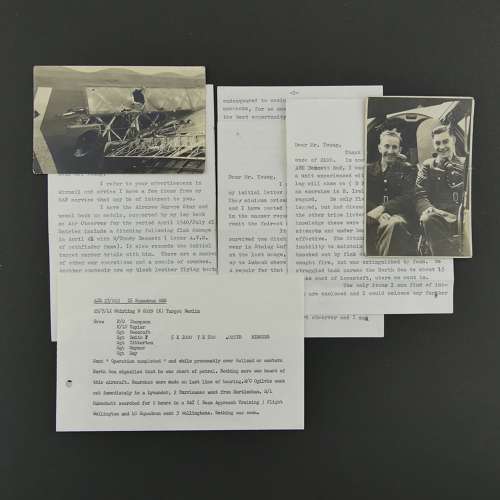 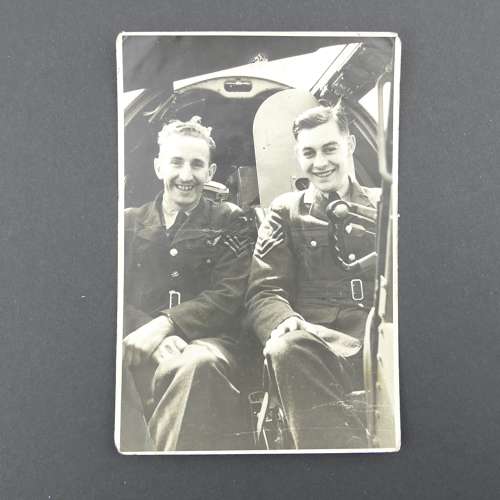 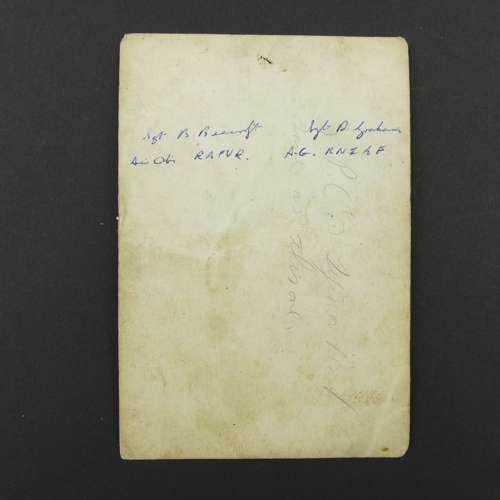 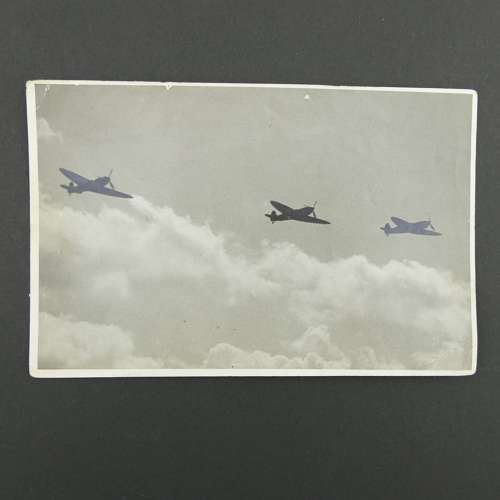 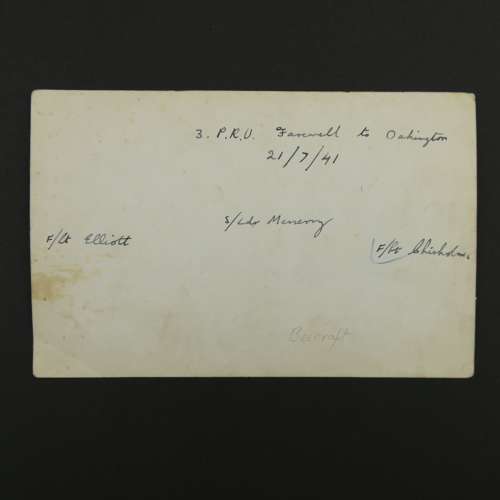 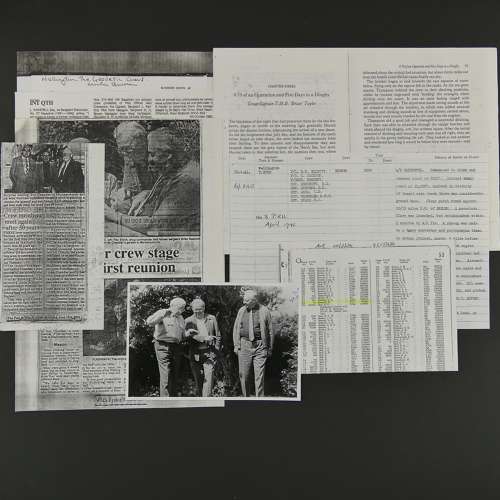 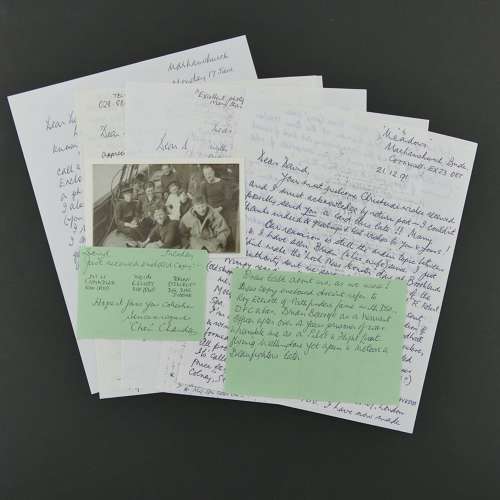