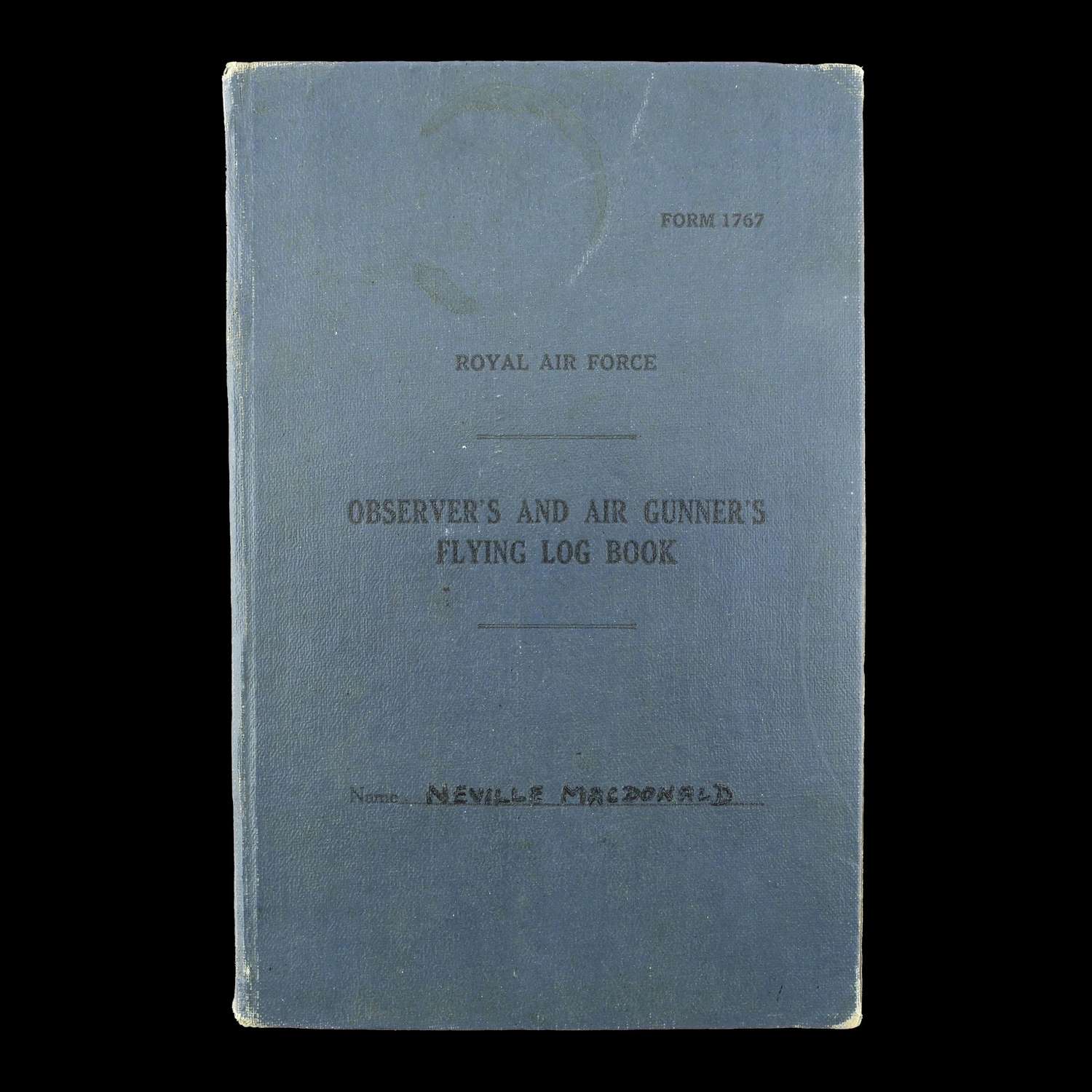 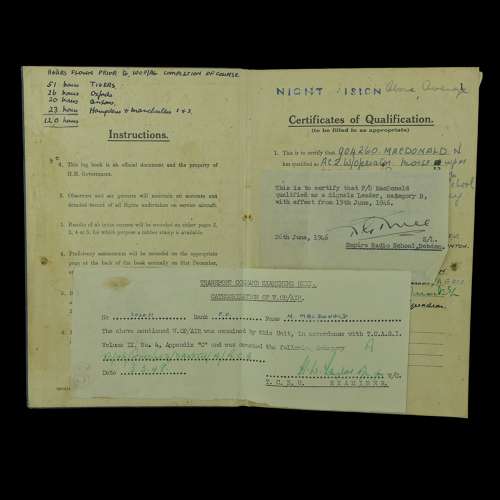 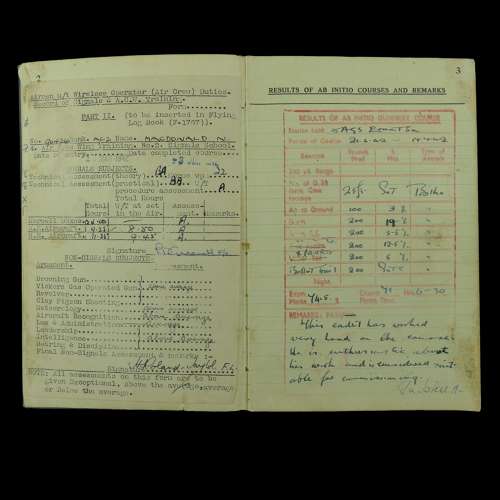 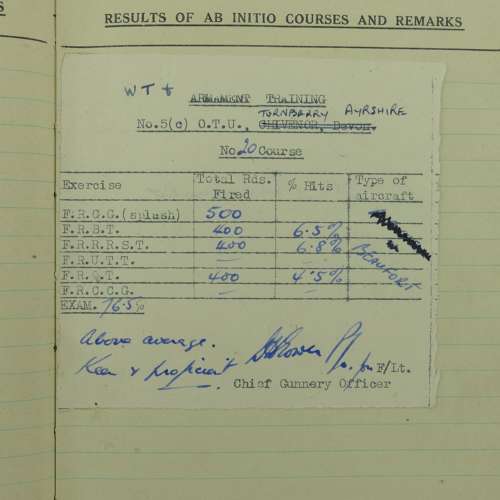 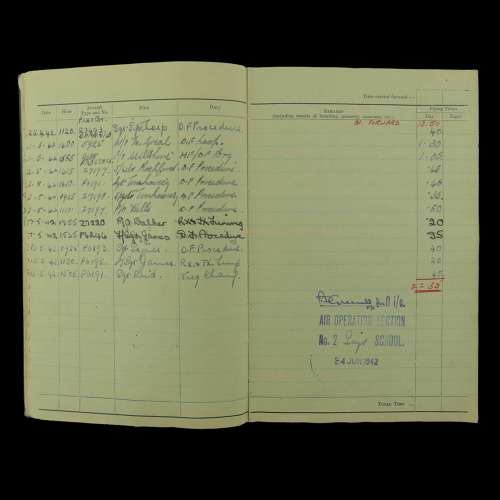 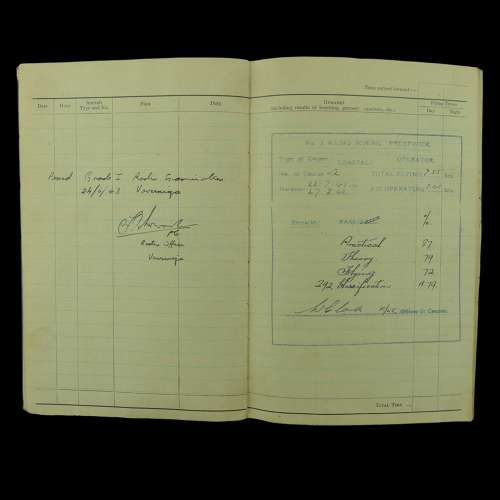 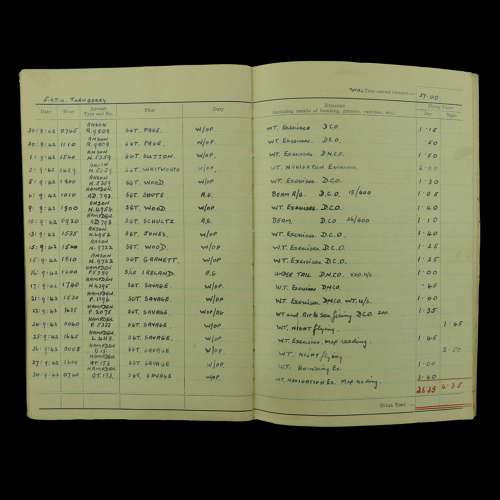 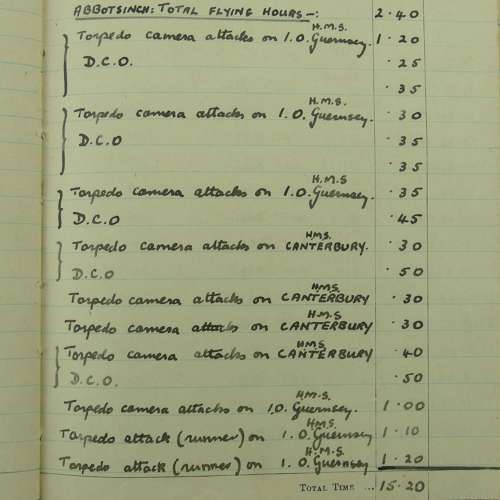 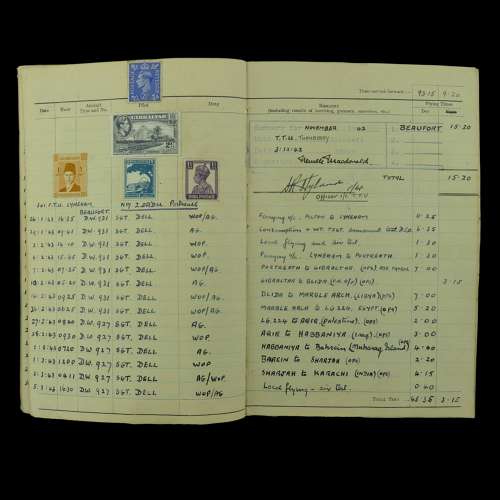 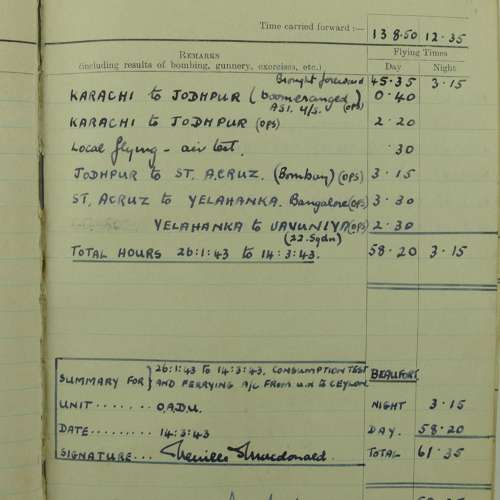 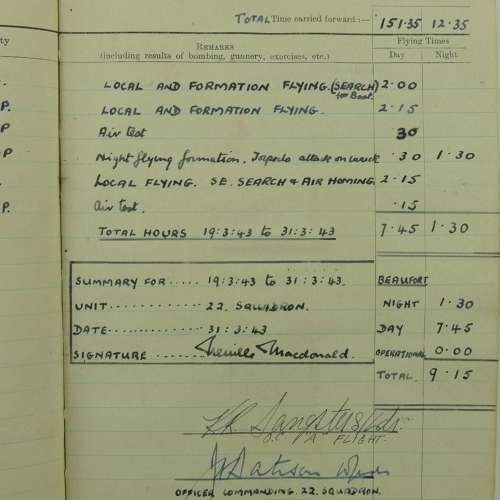 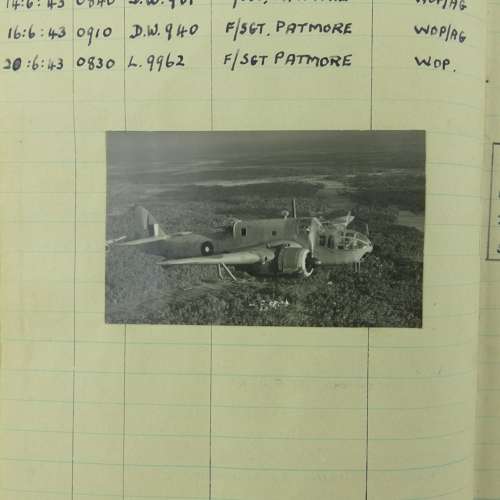 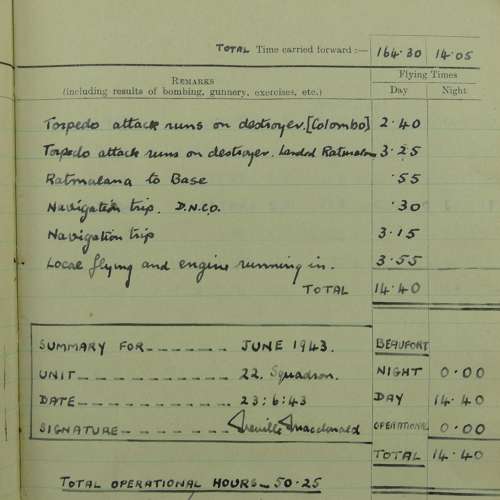 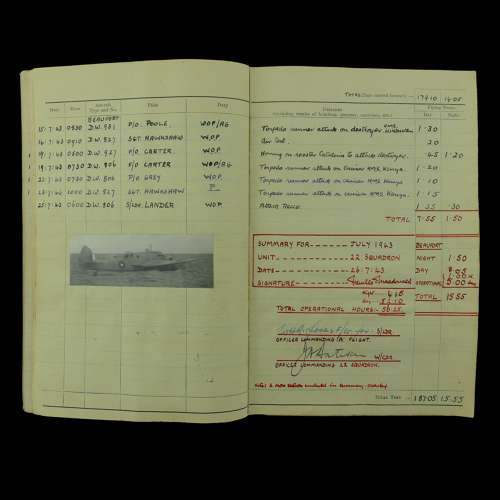 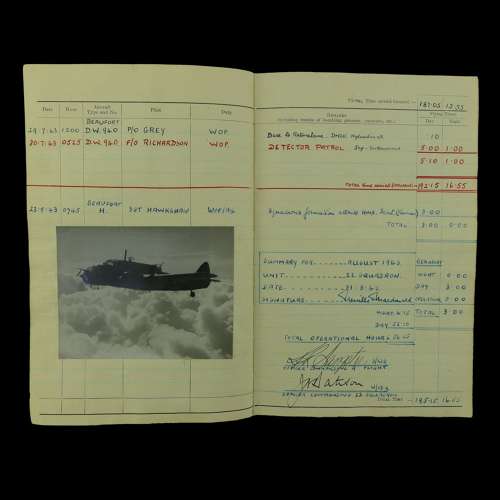 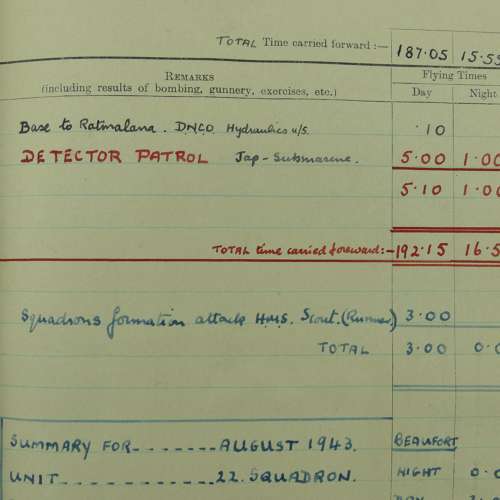 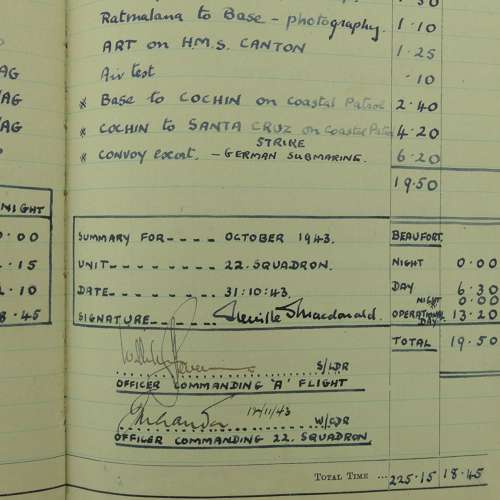 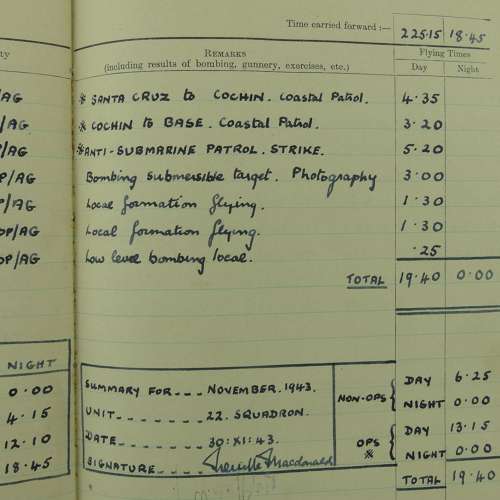 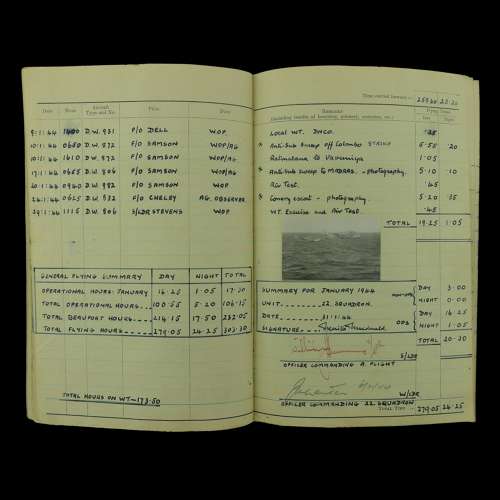 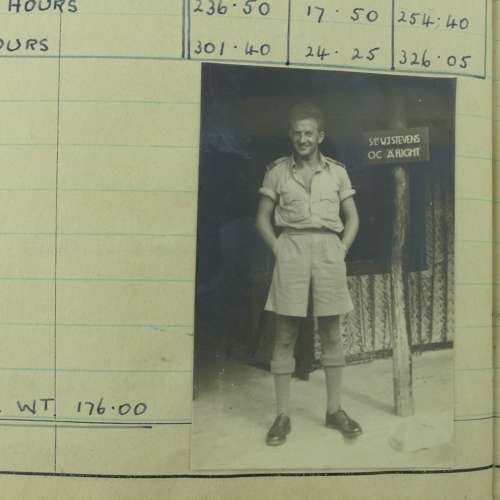 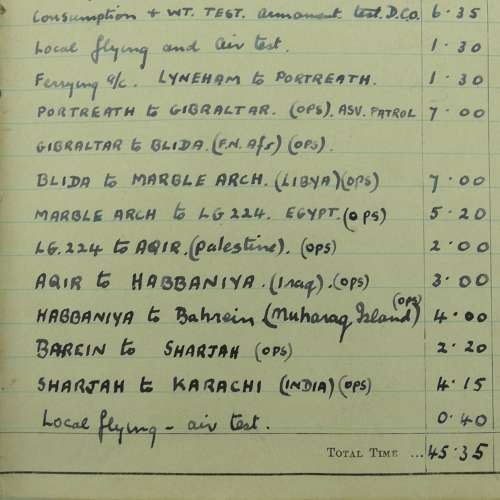 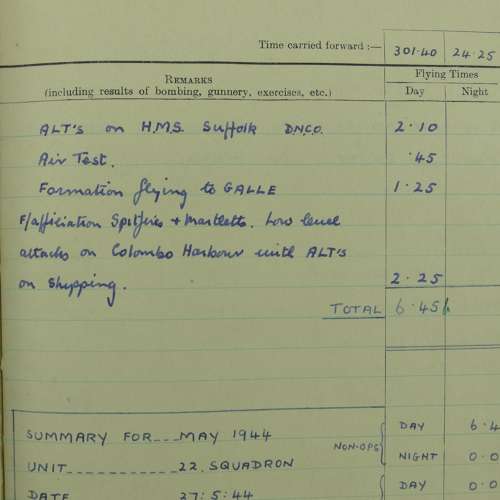 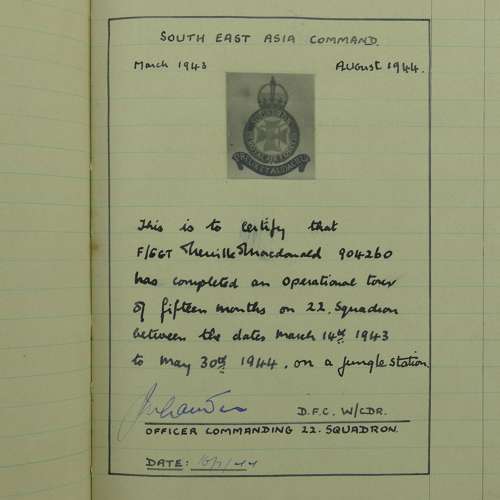 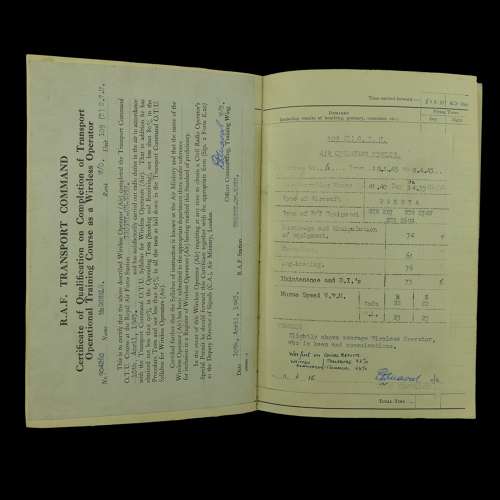 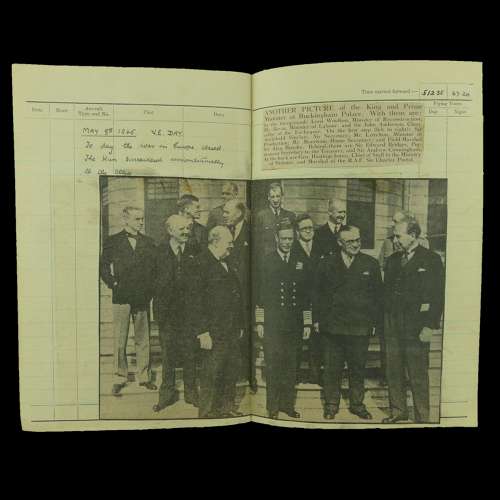 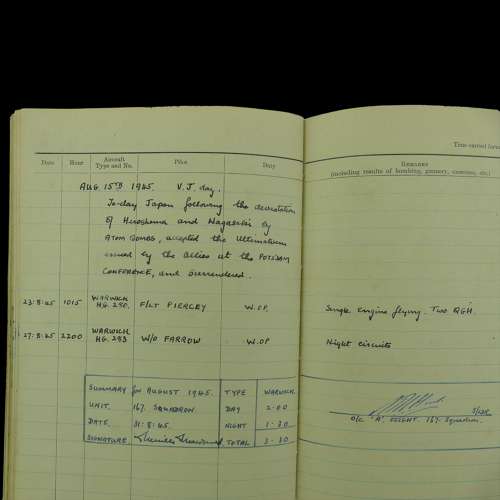 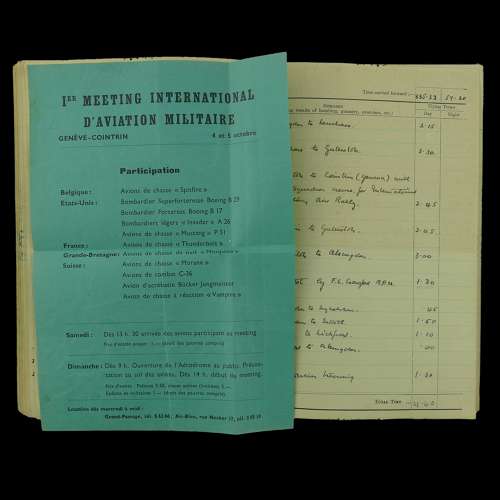 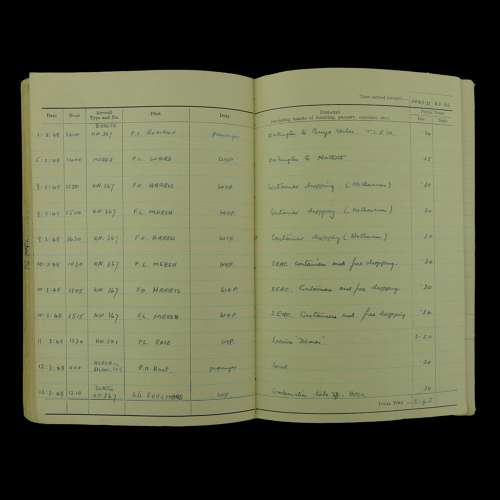 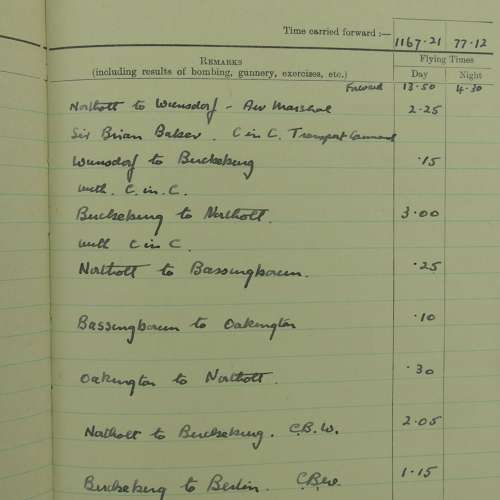 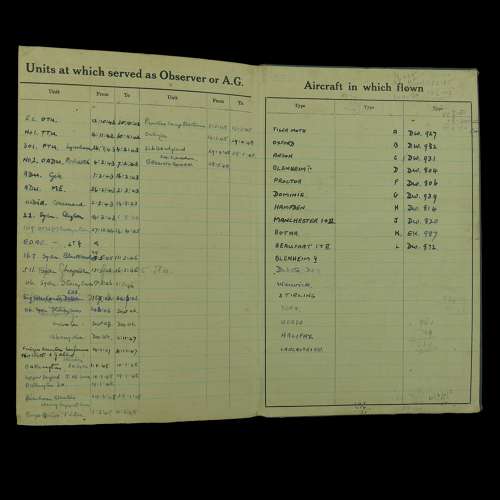 Well written and detailed log book to wireless operator, Flight Sergeant Neville Macdonald (904260).  He qualified as an AC2 Wireless Operator at No.2 Air Signals School, Yatesbury, Wiltshire in August 1941, and as an Airgunner at No.8 Air Gunnery School, Evanton, Scotland c. July 1942.  The log starts on March 19th 1942 at Yatesbury on Dominie aircraft undertaking signals training.   At the end of June, Macdonald was posted to the AGS at Evanton on Bothas and on the 30th August he went to No.5 (Coastal) OTU at Turnberry, Scotland on Ansons, Hampdens and Beauforts.  In November he was posted to the Torpedo Training Unit at Abbotsinch, Scotland, then to the TTU at Turnberry on Beauforts where they undertook torpedo camera attacks on HMS Guernsey and HMS Canterbury.  Macdonald was then posted to 301 Ferry Training Unit and No.1 Overseas Aircraft Preparation Unit in Cornwall where he flew operationally on ASV (air to surface vessel) sorties to Gibralta and around Libya, Egypt, Palestine and India.  On 14th March 1943 he joined 22 Squadron at Vavuniya (Sri Lanka/Ceylon) on Beauforts.  Initially flights were mainly training with torpedo attack runs on destroyers in the area.  On 30th July they undertook a Detector Patrol on a Japanese submarine and during October, coastal patrols and convoy escorts resulted in a strike on a German U-boat.  Similar sorties continued as well as Air Sea Rescue patrols, fighter affiliation flights and low level attacks on Colombo Harbour with ALT's on shipping (Attack Light Torpedo).  In July 1944 the log certifies that F/Sgt. Macdonald had  completed a full operational tour of 15 months on 22 Squadron.  The next entry in February 1945 sees him posted to 109 O.T.U. at Crosby-On-Eden, Cumbria as part of Transport Command, flying on Dakotas.  His qualification certificate is pasted into the log c.10th April 1945.  The results show he was a slightly above average Wireless operator, but he has written in 'was first on course results!'.   On May 8th he notes V.E. day and pasted in clippings of the King and Prime Minister at Buckingham Palace.  In June 1945 he was posted to 167 Squadron, Blackbushe, Hertfordshire on Warwick bombers.  His log records V.J. day on 15th August 1945.   Post WW2 he continued with 167 Squadron until March 1946 when posted to 46 Squadron at Stoney Cross on Stirlings, Dakotas and Yorks.  He was attached to the RCAF VIP Diplomatic Aircraft, Bassingbourne, flew in the International Military Air Rally in Geneva, undertook several 'Special' flights and flights screening Russian Dakota crews flying on a Foreign Ministers Conference.  In 1948 he continued training, flew paratroop drop flights, container drop flights, glider tow flights etc.  The log ends with him at 24 Squadron, Bassingbourne c. 26.08.48.  The log is well written and has official certificates and stamps in addition to some glued in photos, philatelic stamps, newspaper clippings etc.  A good Coastal/Transport Command log book worthy of additional research.  Stock code P21062.