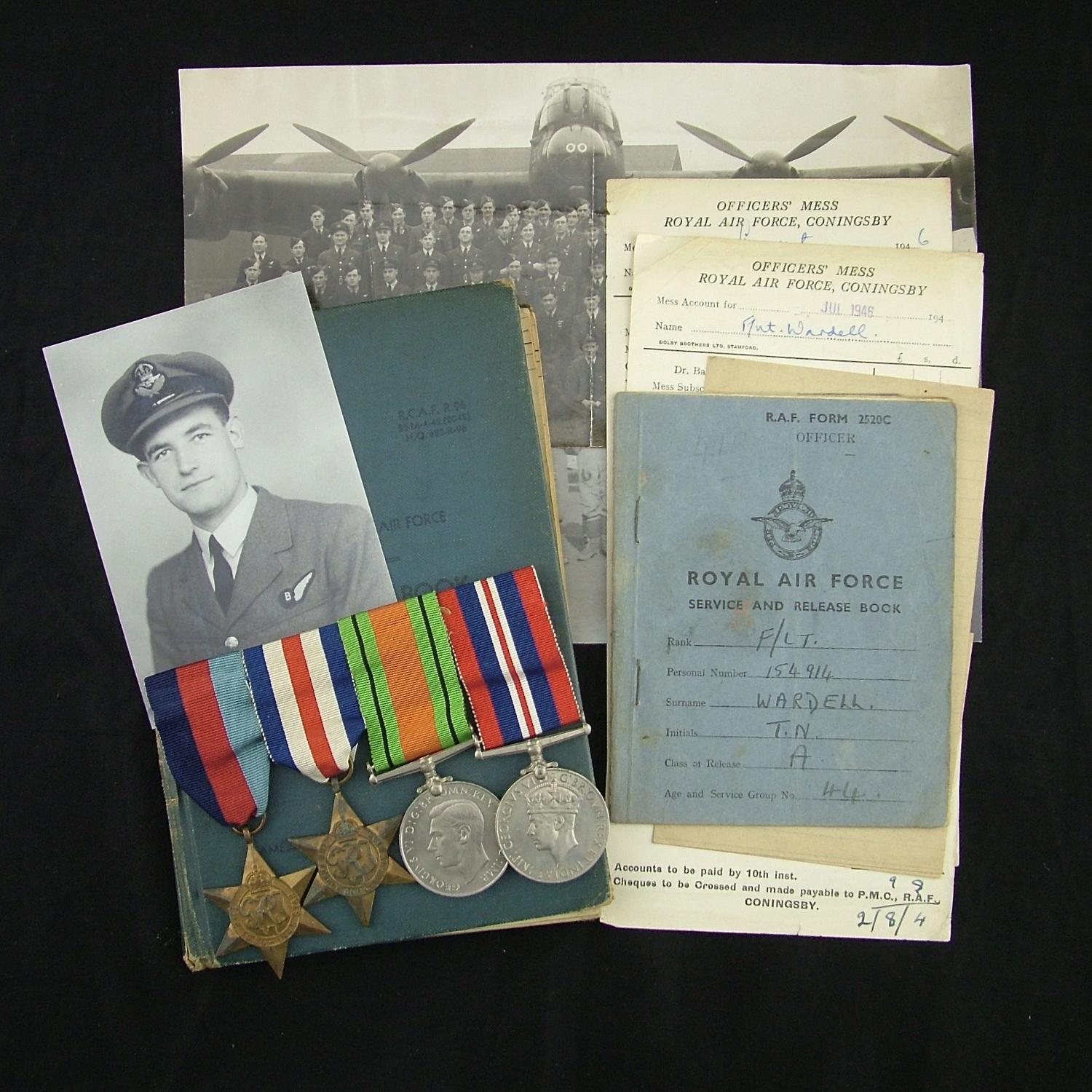 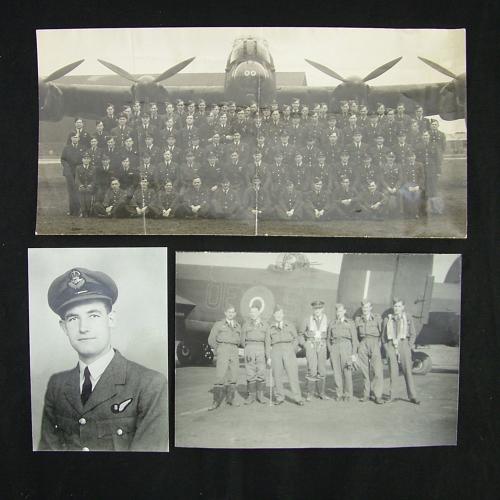 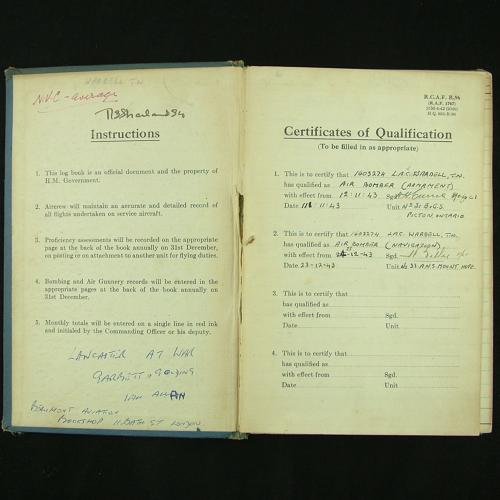 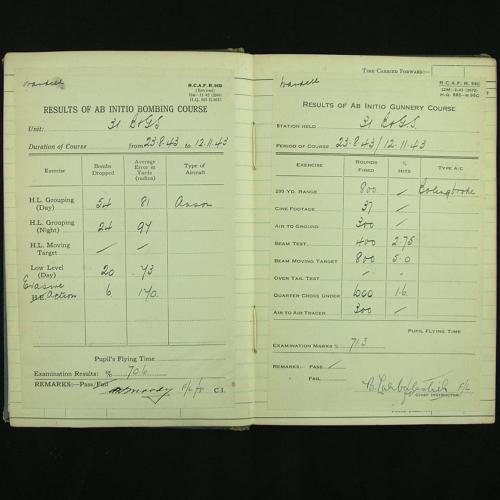 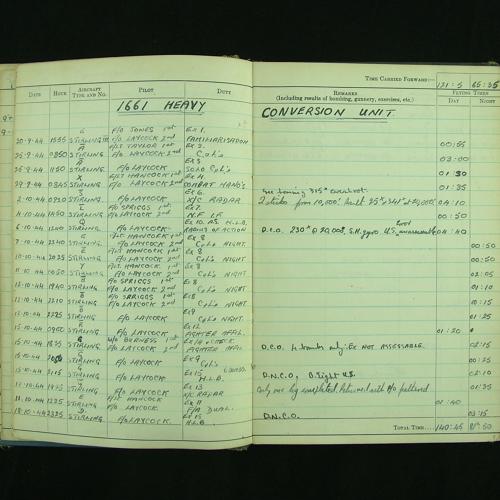 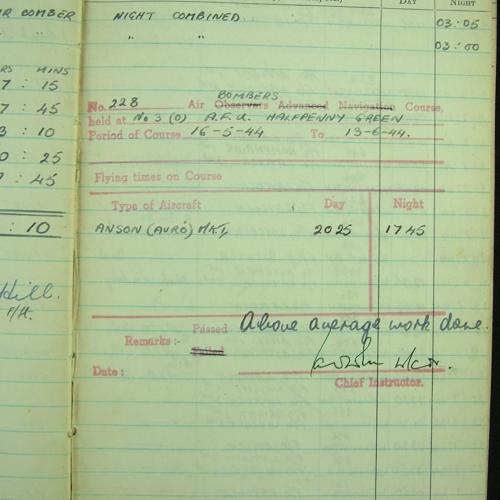 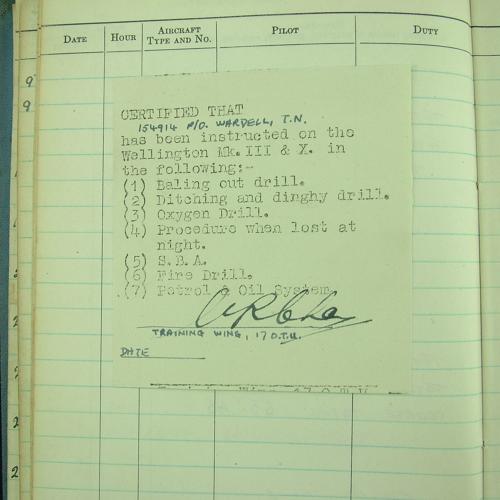 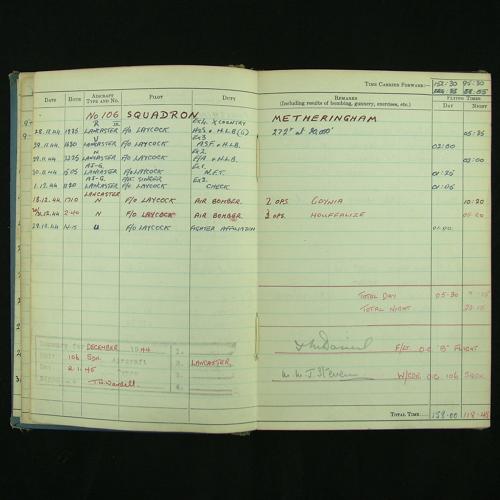 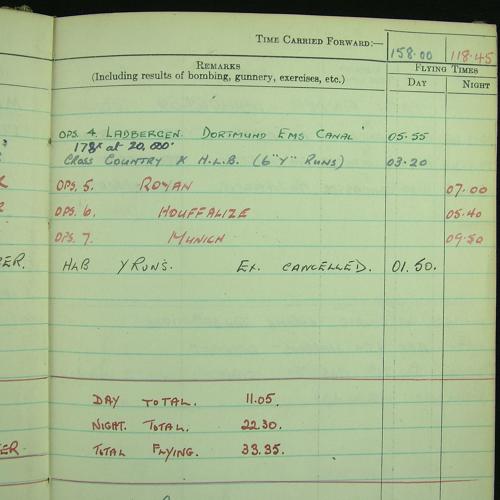 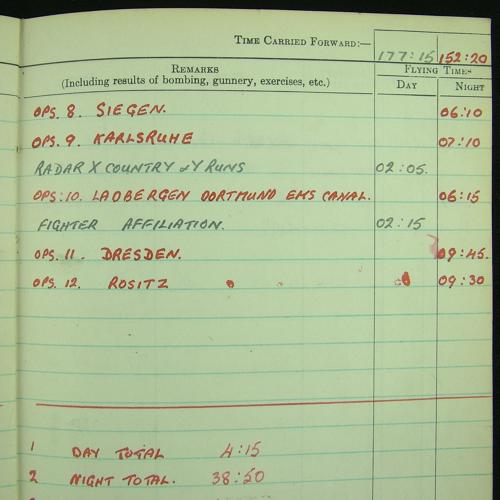 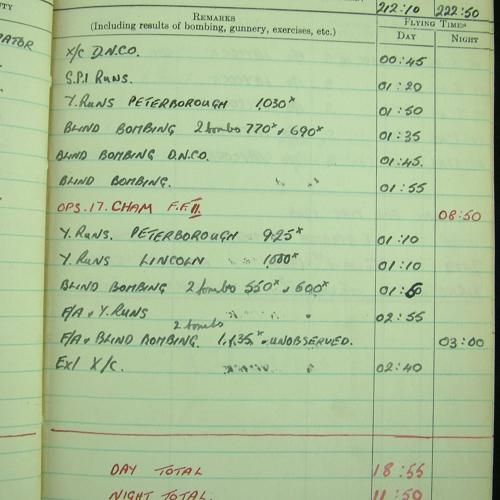 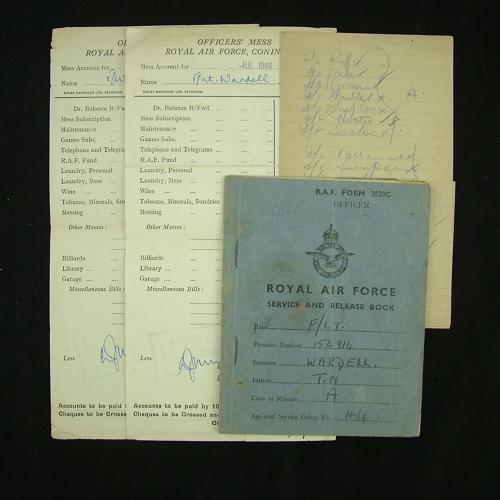 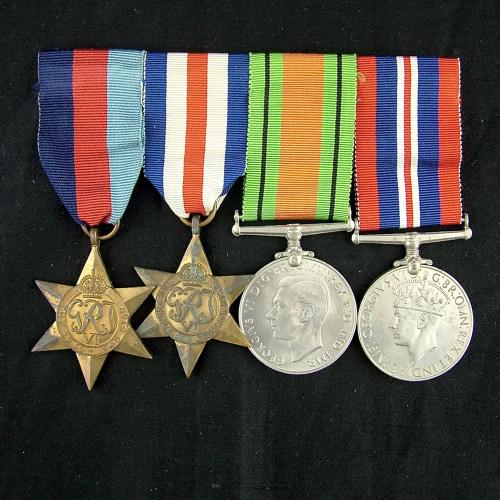 Flying log book to R.C.A.F. LAC (later Fl.Lt.) Terry N. Wardell, a bomb aimer / wireless operator with 106 squadron.  His training began in Canada on 14th September 1943 at No.31 Bombing and Air Gunnery School, Picton, Ontario flying in Ansons and Bolingroke aircraft.  In November 1943 he moved to No.33 Air Navigation school before heading to the UK in May1944 and No.3 Advanced Flying Unit at Halfpenny Green.  On 30th June 1944 he was posted to No.17 Operational Training Unit (Silverstone) on Wellington bombers and then to 1661 Heavy Conversion Unit on Stirlings.   By November he was at No.5 Lancaster Finishing School at Syerston before being posted to 106 Squadron at Metheringham.   His first operational flight was on December18th to Gdynia on the Baltic coast.  Ops to the Dortmund Ems canal at Ladbergen, Royan, Houffalize and Munich followed during January 1945.  The raid on Royan was controvertial, apparently an American officer from the tactical air force units in France suggested the German garrison should be softened up by bombing and was assured by the French that the only civilians there were collaborators, which was not true.  The suggestion reached S.H.A.E.F. and the task passed to Bomber Command.  Two waves of bombers destroyed  between 85 and 90% of the small town and hundreds of French civilians were killed.   In January 1945 he was posted to the Pathfinder navigation training unit at Warboys before returning to 106 at Metheringham and operational flights to Siegen, Karlsruhe, the Dortmund Ems canal and on 13th February, the infamous 'Operation Thunderclap' targetting Dresden.  This raid created a firestorm completely burning out large areas of the city and killing in excess of 50,000 people. On 17th February Wardell was posted to 97 Squadron at Coningsby.  From there he flew a further 5 OPs including Harburg, Lutzkendorf and Hamburg.   The log ends in March 1946 with a total of 17 Ops.  It is signed off at the end of each month by Wardell and his commanding officer and contains various official stamps.

With the log comes his service and release book (tatty), a couple of Mess bills from Coningsby dated 1946, an original 97 Squadron photograph with his position marked to the rear (photo creased/folded), two modern reprint photos and his medals comprised of the 1939-45  and France & Germany stars, Defence and War medals.   A very interesting log worthy of further research.  Stock code P22873-4.