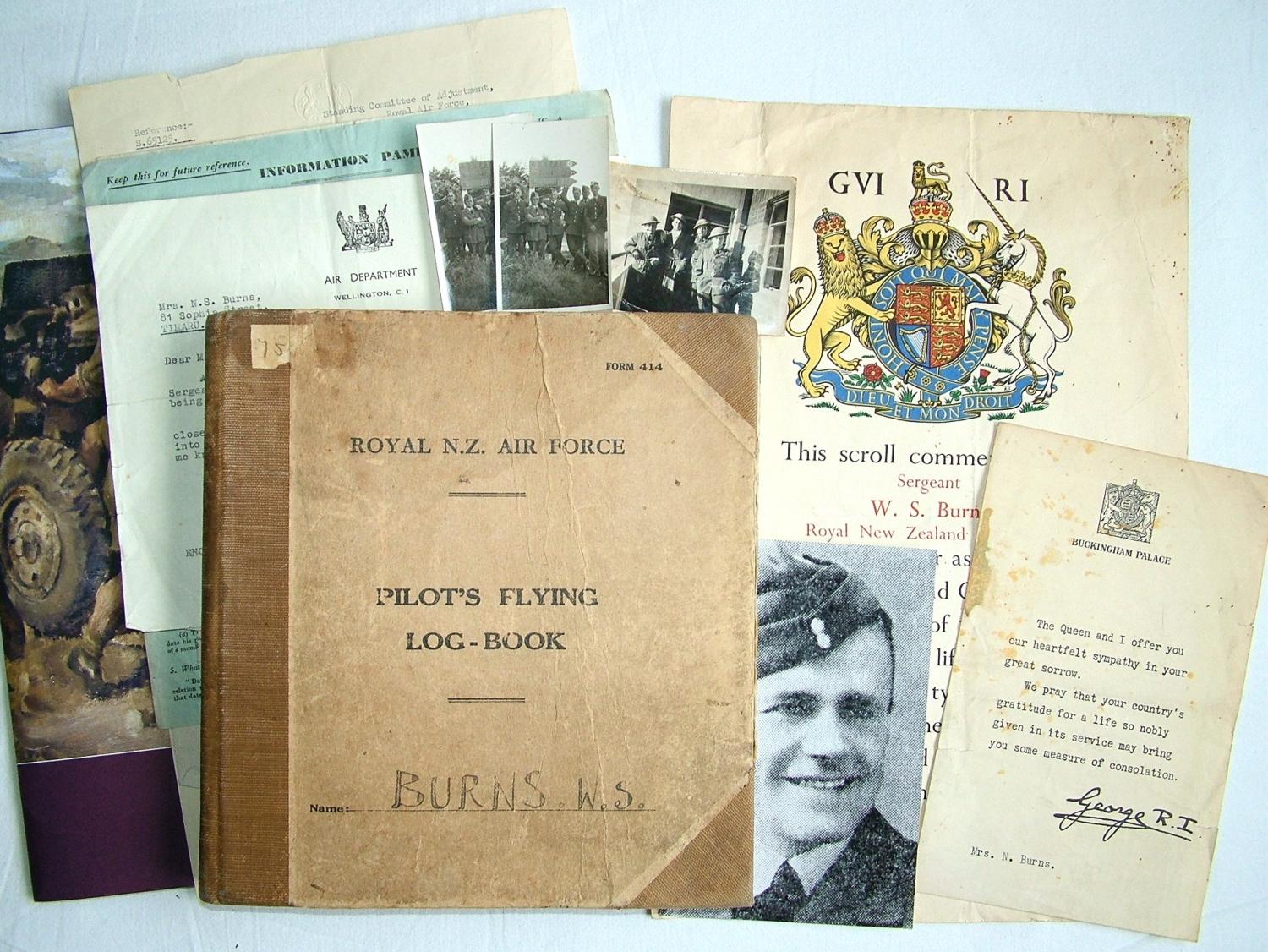 From 414. Pilot's Flying Log Book of Sgt. Pilot William Stead Burns (NZ411856 ), killed in action (KIA) on 2nd August 1942, aged just 29. Burns was enlisted at Levin in March 1941 and after completing his initial training proceded to EFTS, Taieri for flight training. He first flew solo in June 1941,qualifying as a pilot and gaining promotion to Sergeant on September 6th 1941 at No.1 SFTS Wigram. In November 1941 he embarked for the UK, travelling via America and Canada, arriving at No.3 Personnel Reception Centre in Bournemouth on 26th December. Further training commenced at No. 1513 Beam Approach Training Flight, Honnington, Suffolk followed by No.3 Advanced Flying Training at South Cerney in Gloucestershire. From there he moved to No.13 OTU at Bicester during which time he carried out operational exercises on Blenheims. Sgt. Burns left England in June 1942 as the pilot of a Bristol Bisley (early Blenheim) aircraft en route for Cairo via Gibraltar and Malta when he became a member of the Middle East Ferry Command. Burns was reported KIA due to an aircraft accident on August 2nd 1942. The Blenheim, D.7594, believed to be low flying, crashed near R.A.F. Wadi Seidna, Sudan. The bodies of the crew, Sgt. Burns, F/Sgt. J.P. Speakman and Sgt. R.E. Simkin were badly smashed/mutilated (official terms used within the files) and buried almost immediately in the sand. A original New Zealand Air Dept. letter dated 1949 states that the graves 'are considered lost' and that the names were to be recorded on memorial to the missing. Burns qualified for the Africa star, Defence, War and New Zealand war medals (not present with this grouping.)

The log details his training in Tiger Moth and Oxford aircraft (the latter under the instruction of a Flying Officer Farnsworth). The log ends abruptly on June 26th (Malta to Cairo). It is well marked with official stamps and signed off by the commanding officer relevant at each stage of training. It also details Burn's use of the Link trainer and that he has read various training manuals etc. The log comes with various original documents including three small photos c.1942 - one named to rear; a letter to his mother dated November 1942 relating to Burn's personal effects in the Middle East; a letter to his mother from the NZ Air Department (NZAD) dated July 1943 regarding receipt of personal effects; original typed list of his personal effects; original letter from the NZAD dated 1946 regarding the forwarding of Burns's log book to his mother; original printed slip from Buckingham Palace offering the sympathy of the King and Queen for his loss and the original commemoration scroll printed with his name. In addition there are photocopies of all the records held for Burns by the New Zealand Defence Force Archives. These include his enlistment papers, medical examination, training information, crash details, medal entitlement and so on. Finally there is a copy photo of Burns taken from the Weekly News (issue 2/12/42) and printed by the RNZAF museum. Burns is commemorated on column 266 of the El Alamein Memorial in Egypt and is one of a total of 4202 New Zealand airmen died while serving during WW2. His name is also in 'For Your Tomorrow, A Record of New Zealanders Who Died While Serving With The RNZAF And Allied Air Services Since 1915' vol. 1 by Errol W Martyn, p231.
An interesting group to a young pilot who lost his life tragically early. Stock code P18900. 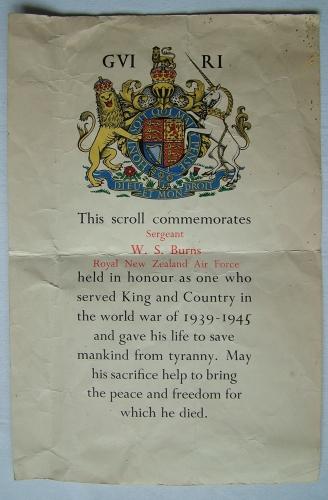 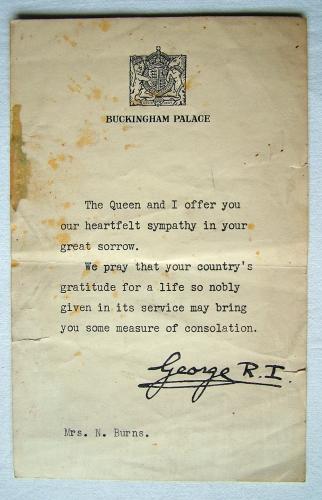 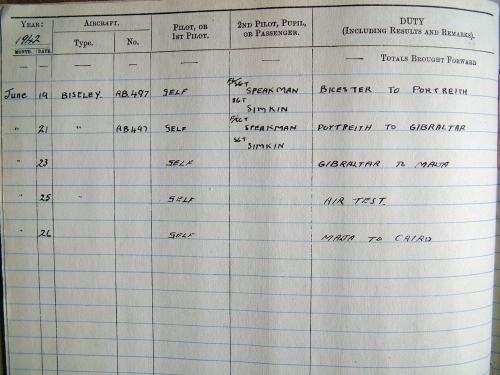 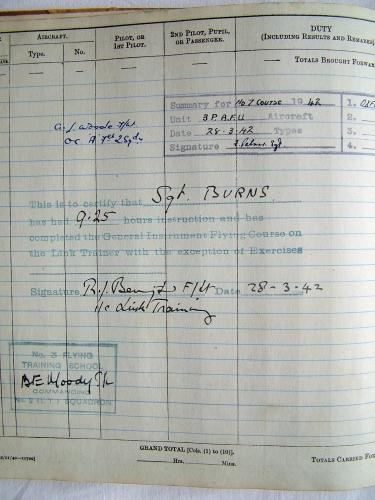 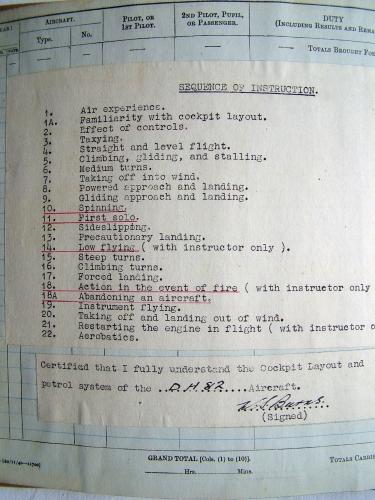 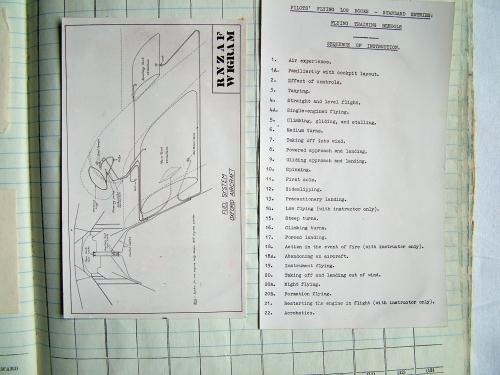 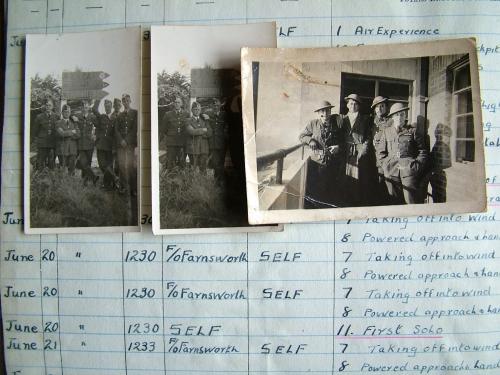 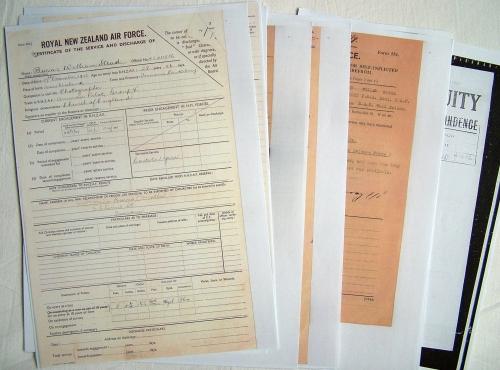 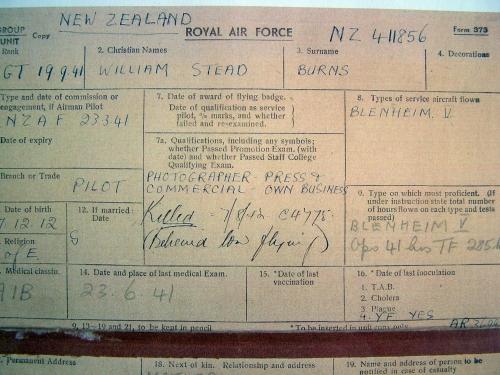