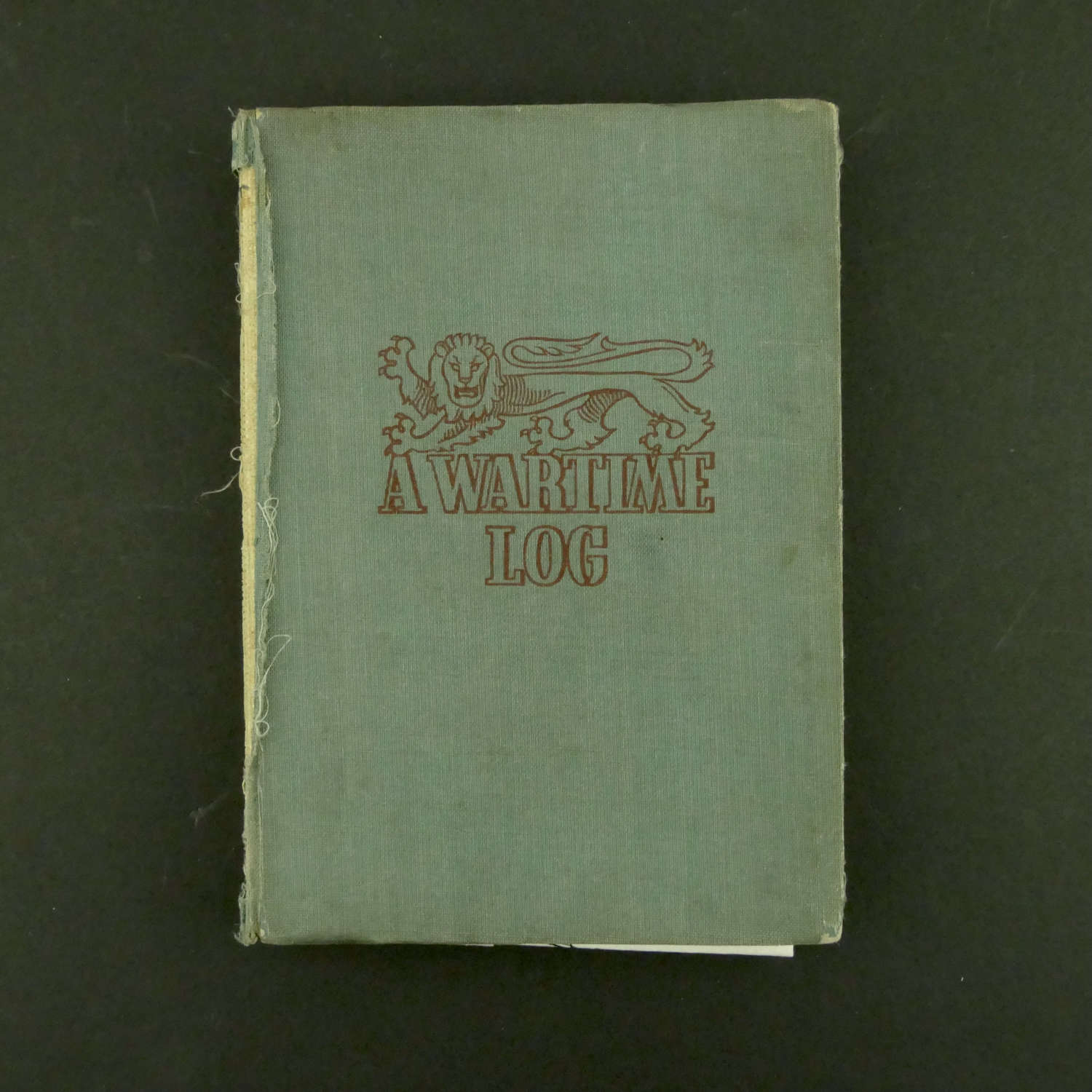 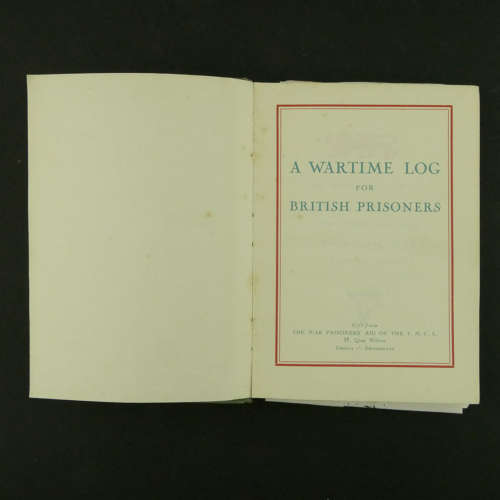 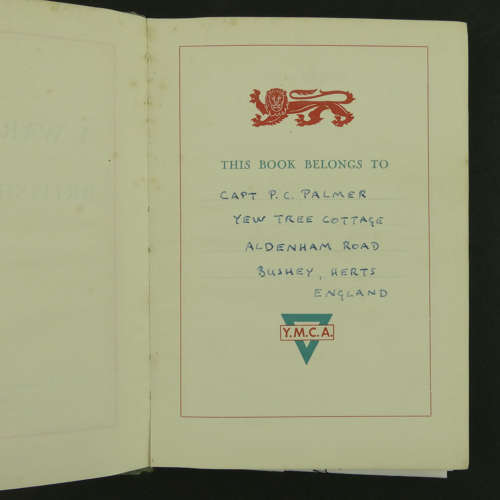 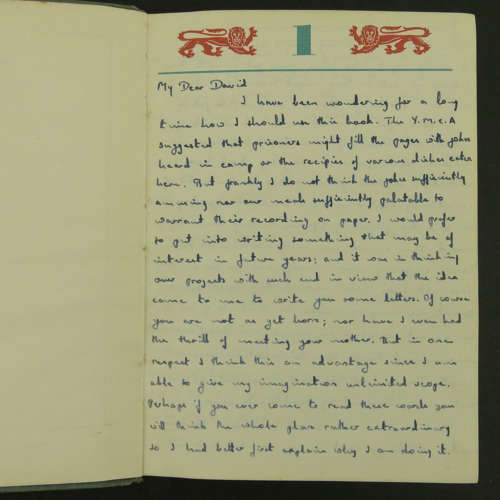 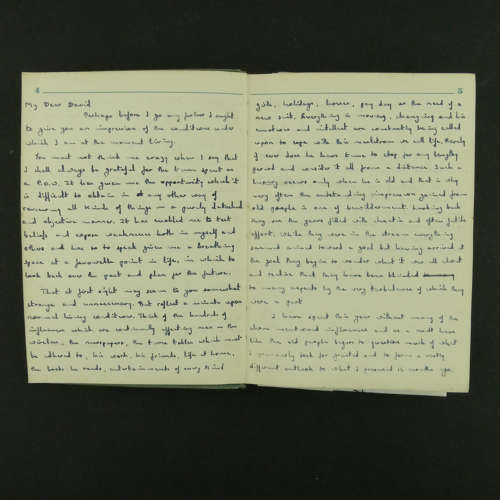 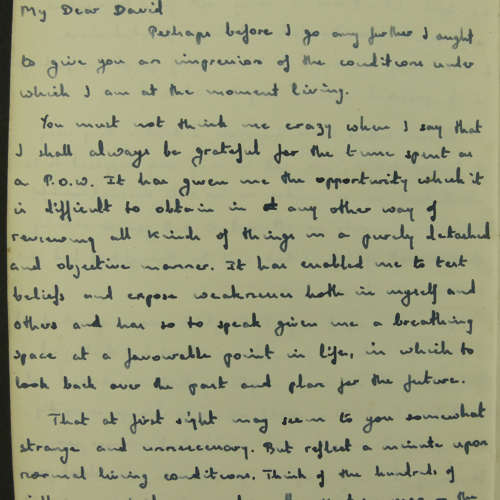 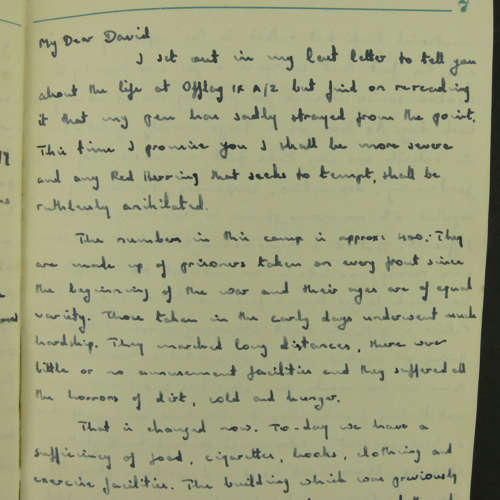 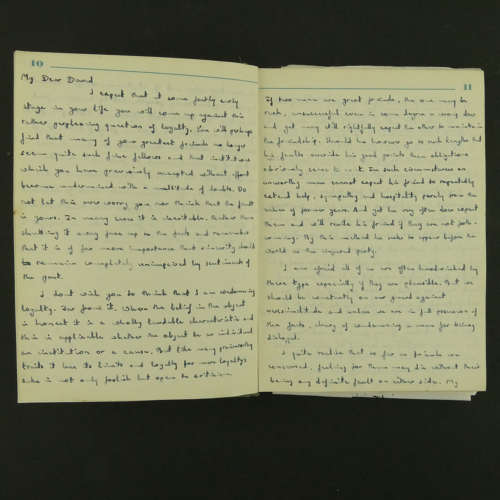 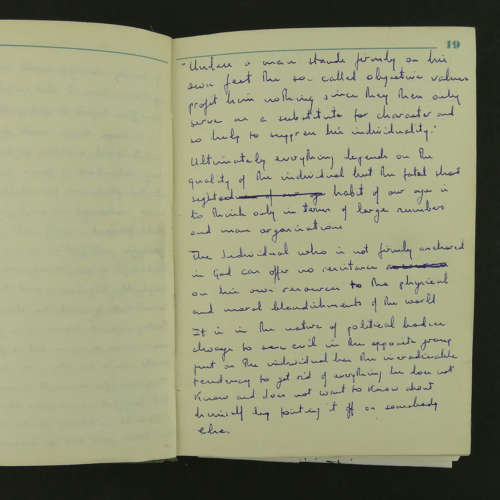 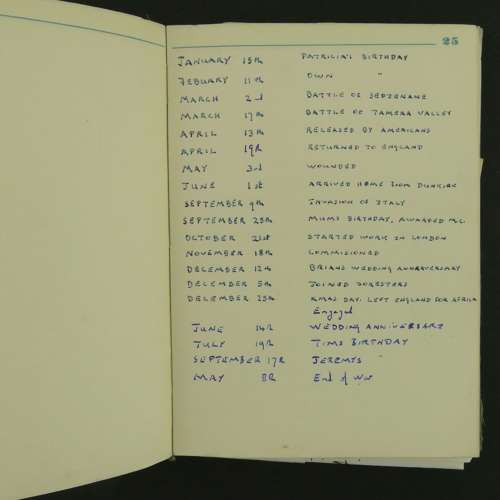 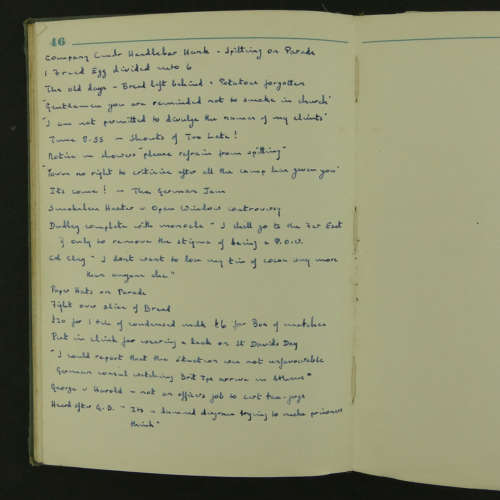 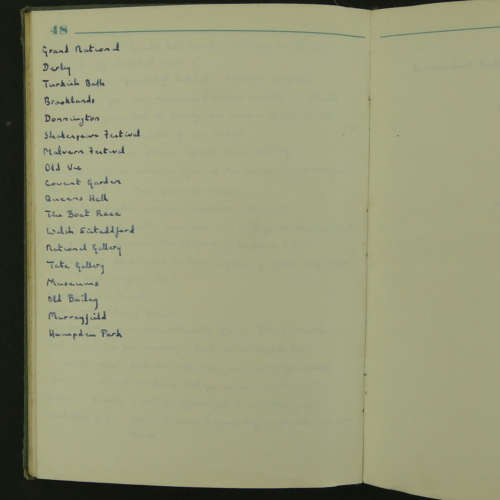 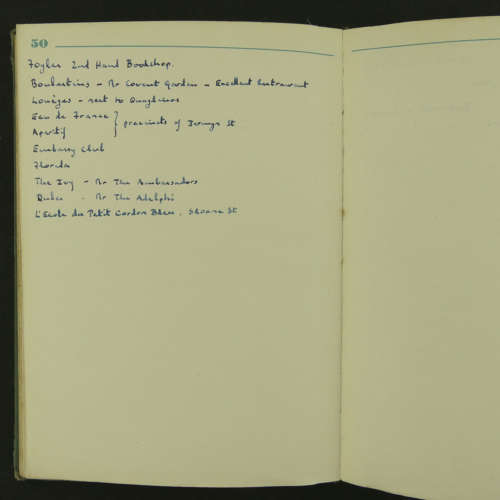 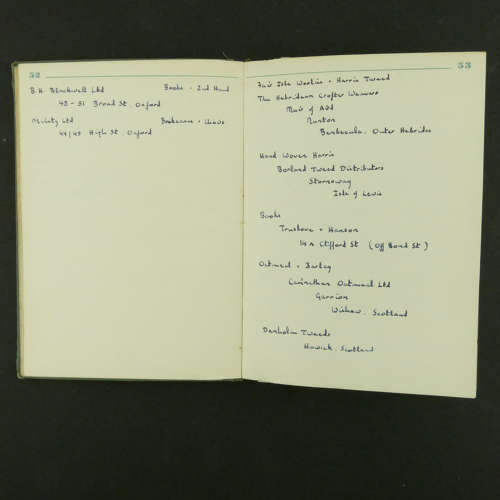 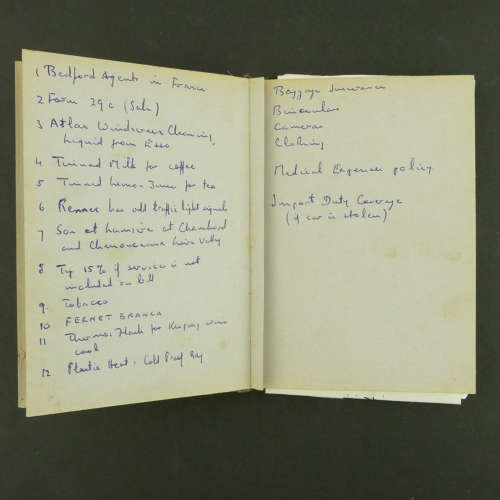 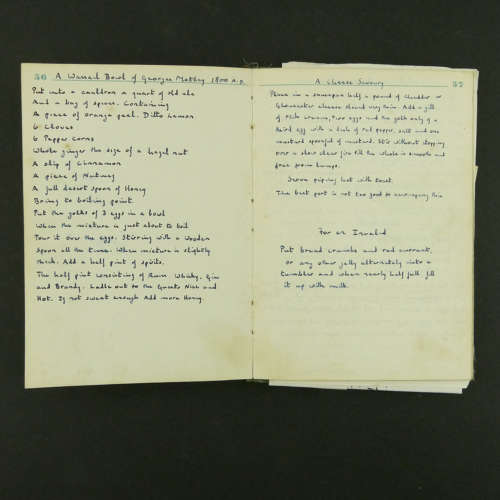 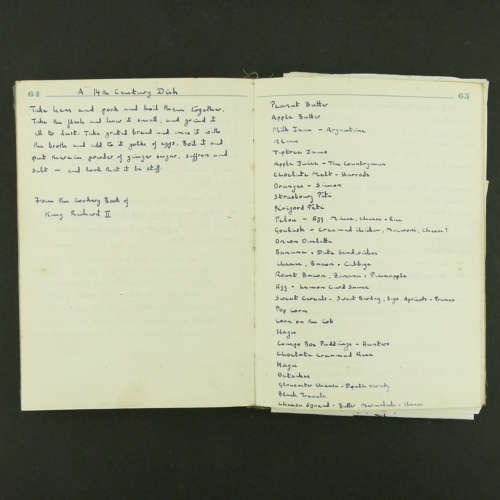 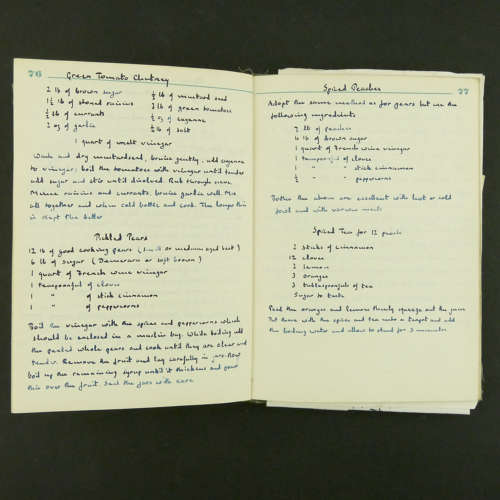 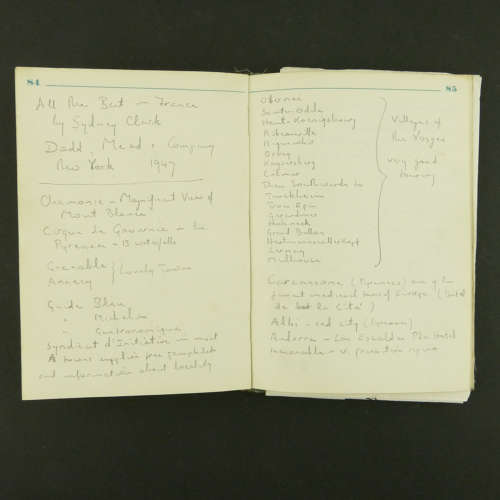 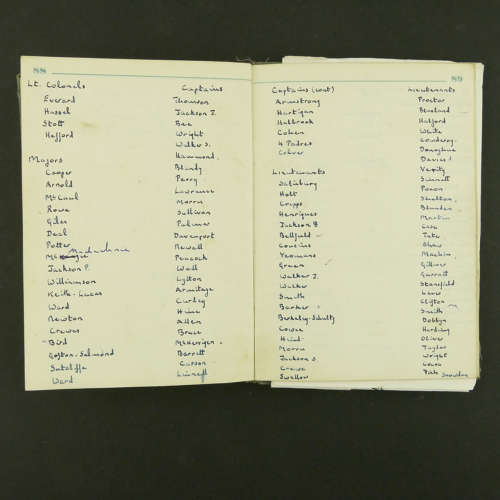 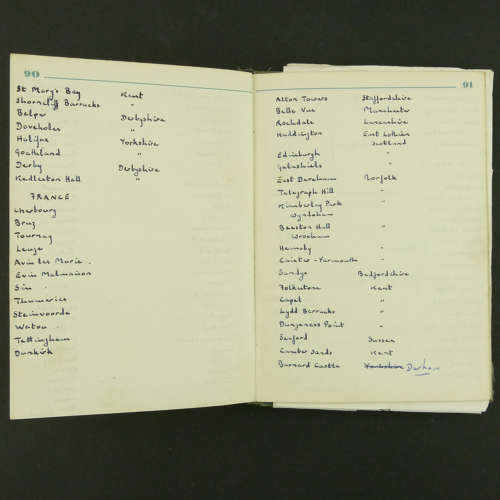 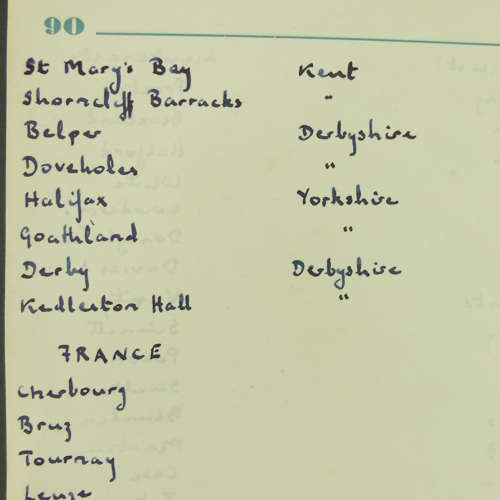 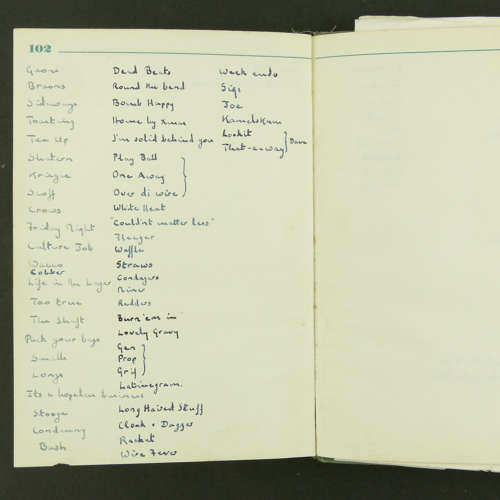 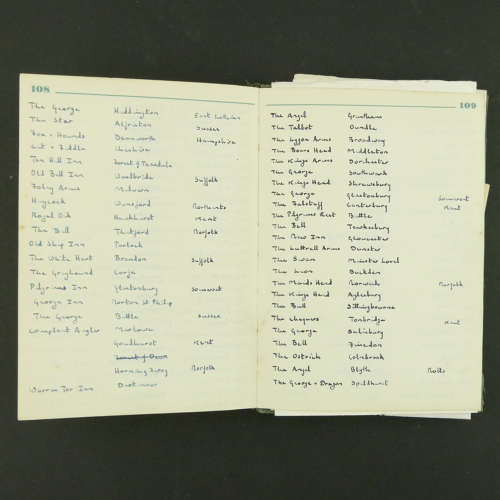 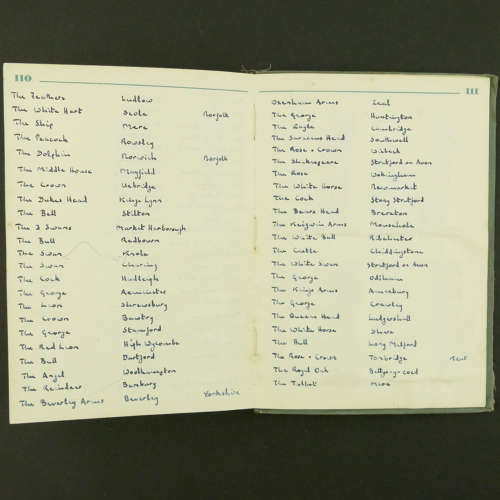 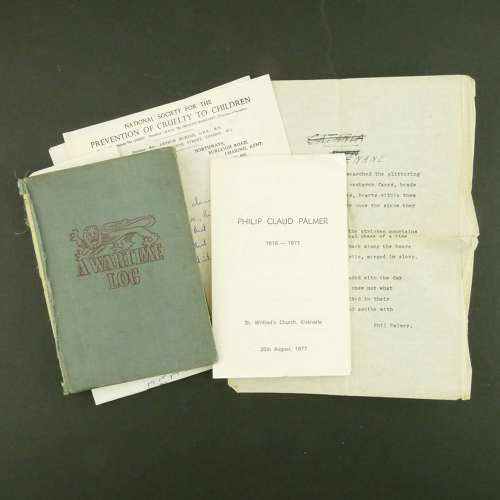 A Wartime Log for British Prisoners.  H/b, approximately 12 x 18cm.  These books were sent into PoW camps by The War Prisoners' Aid Of The Y.M.C.A., Geneva, Switzerland with the aim that the recipient could use it as a diary, sketchbook, poetry book, etc to help pass the time during imprisonment. This example belonged to Lt. (Temporary Captain) Philip Claud Butler M.C., 105589, of the 5th Battalion Sherwood Foresters (Nottinghamshire & Derbyshire Regiment).  He was held captive at  Oflag IX A/Z. The ‘Z’ an abbreviation for Zweiglager or sub camp and was close to Kassel in Hesse. The building was originally an established high class girls school.  The content of the book is varied - he begins by pondering how to use the book - 'The YMCA suggested that prisoners might fill the pages with jokes heard in camp or the recipes of various dishes eaten here.  But frankly, I do not think the jokes sufficiently amusing nor our meals sufficiently palatable to warrant their recording on paper'.  He then goes on to address 'My Dear David', a yet unborn child.  Indeed, he hasn't even met the future child's mother at this point!  He mentions there are about 400 men in the camp from all fronts and that early prisoners suffered long marches and hunger whereas 'today we have a sufficiency of food, cigarettes, books, clothing and exercise facilities'.  He mentions Red Cross parcels, 'appalling monotony', being nauseated 'by seeing the same people, eating the same food, hearing the same talk...' and 'the German wireless and papers with their reports of Allied advance on all fronts make me hopeful that we shall not be here much longer'. He also writes about fathers and sons, loyalty, and so on.  Elsewhere he has produced lists.  One is comprised of dates including birthdays and key moments in the war (and afterwards).  It would appear he fought in North Africa/Italy at the Battle of Sedgenane and Temera Valley (1943) but was wounded and returned to England.  It isn't clear when he was taken as a prisoner.  Other lists include hotels, various parcels (contents and costs), ranks and names of men - presumably in the camp, places in the UK and France and other countries that he appears to have visited, lists of music, slang, and sayings - 'rare do', 'tear off a strip', 'rocket', 'he who relaxes is helping the axis', 'you've gotta run to beat the hun' etc.  Next is a long list of public houses all over the UK - is your local one of them?  He's also written out recipes for various dishes, I imagine all wishful thinking as the ingredients would have been very scarce.  Palmer was awarded an immediate Military Cross on 23rd March 1943.  The citation reads 'At Tamera on 17th March '43 this officer commanded a company of reinforcements of various regiments, who had been with the Battalion for only four days.  His company locality was attacked twice during the day.  Both attacks were beaten off and Capt. Palmer organised an immediate counter-attack which was successful.  His company locality ??? ??? maintained throughout the day.  His disregard of personal danger, his coolness and his leadership were an example to his company.  He was tireless in visiting his platoon under fire and in encouraging his men'.  In 1947 Philip Claud Palmer married Elizabeth Mary Anderson of Kirkharle Hall, Northumberland, the childhood home of  famed 18th  Century Landscape designer Sir Lancelot 'Capability' Brown.  Elizabeth was the only child of Major George Denis Anderson of Littleharle Tower.  They had five children (including the unborn 'David' referred to in the wartime log). In postwar years he worked for the NSPCC and died in 1977.  The log comes with a poem he wrote about the battle of Sedjenane, some post-WW2 letterheads, a photocopy of his MC citation, and an order of service for his funeral.  The book is a little tatty with a damaged spine but nevertheless a rare insight into the life and thoughts of a British PoW.  Stock code P25052.