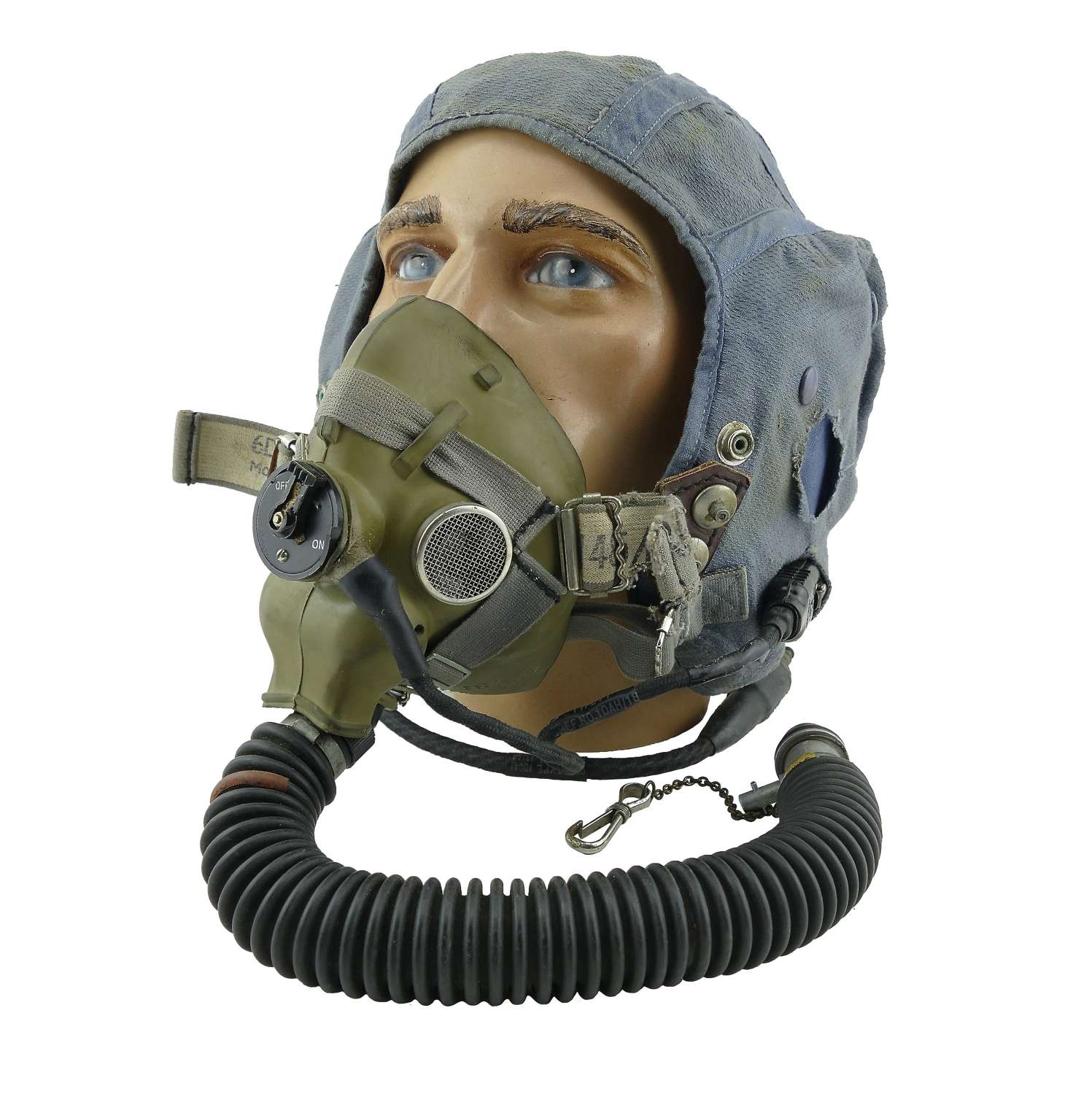 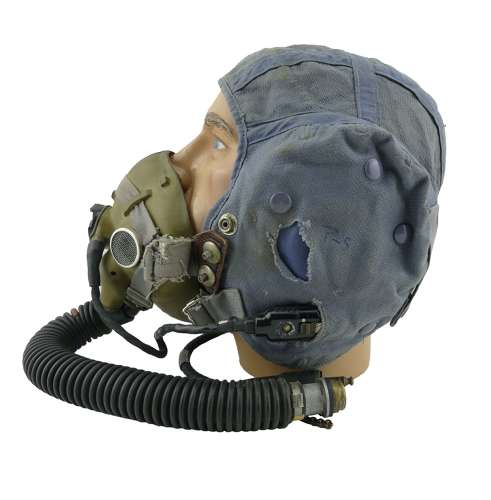 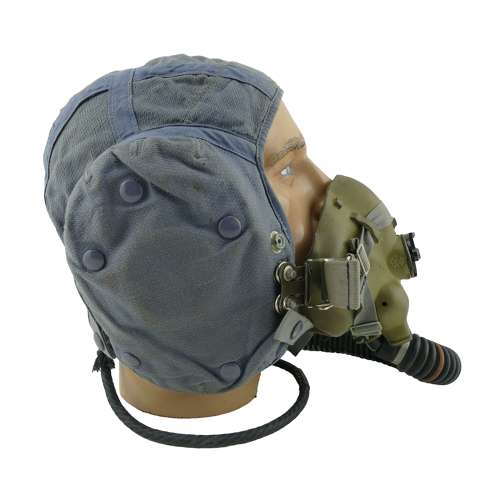 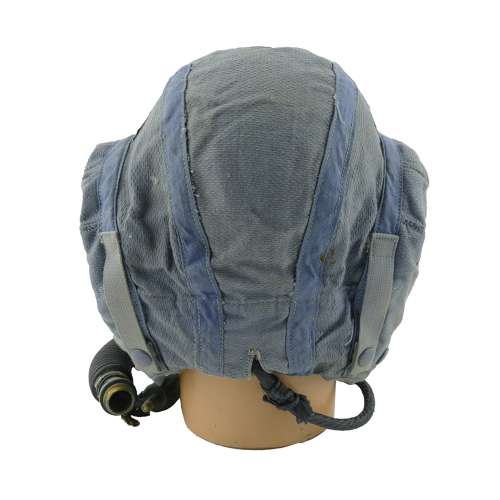 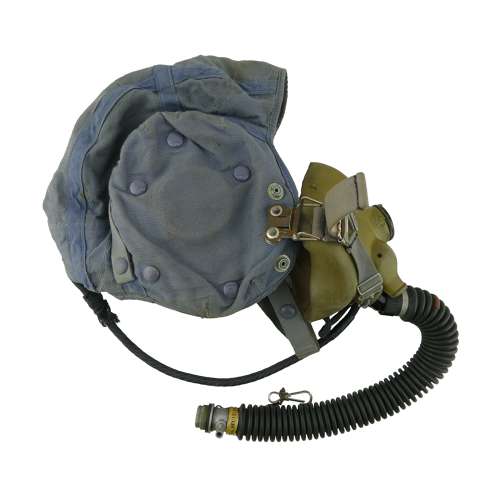 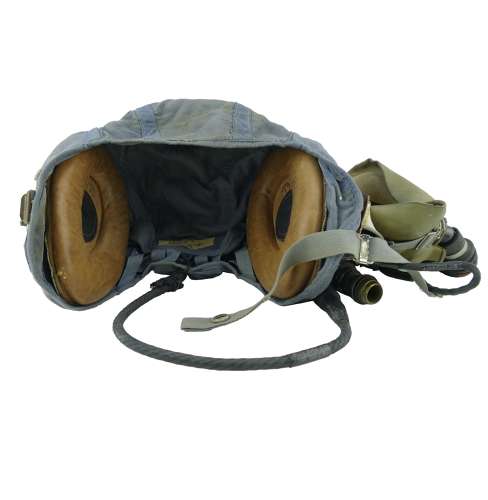 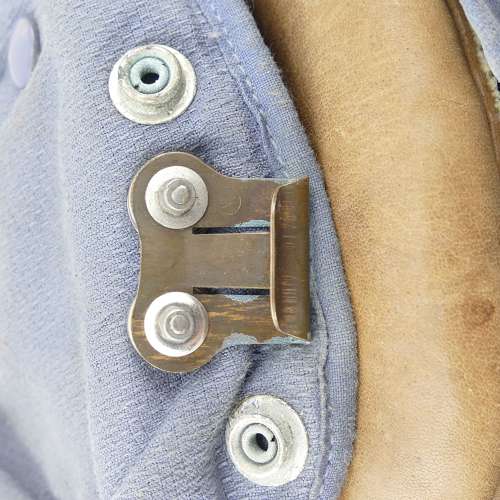 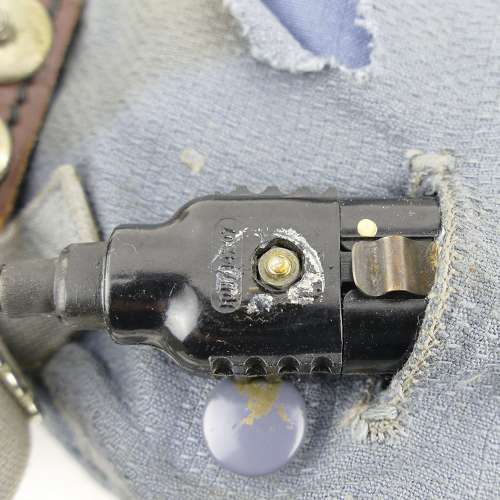 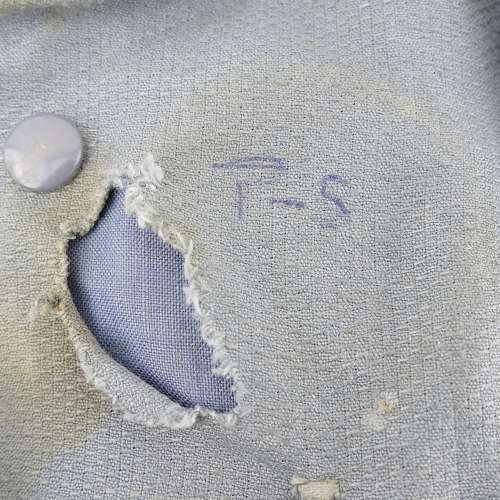 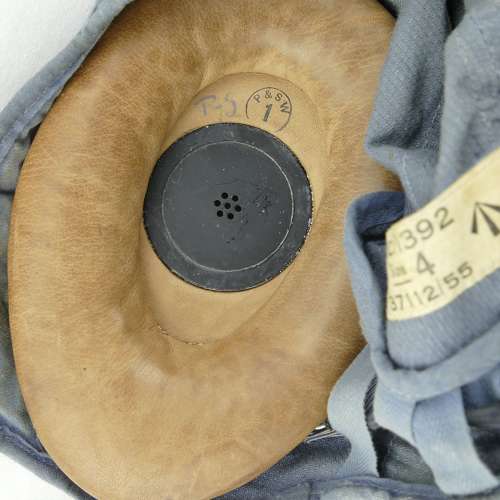 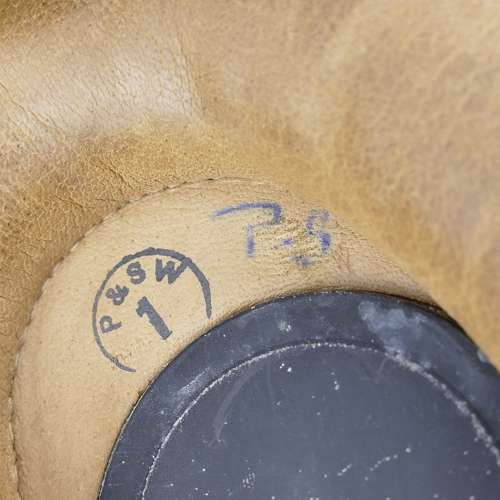 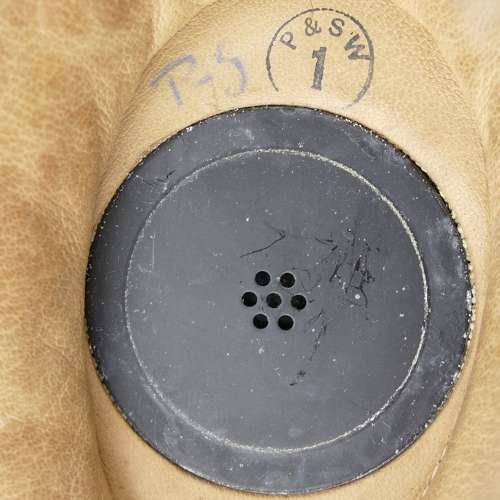 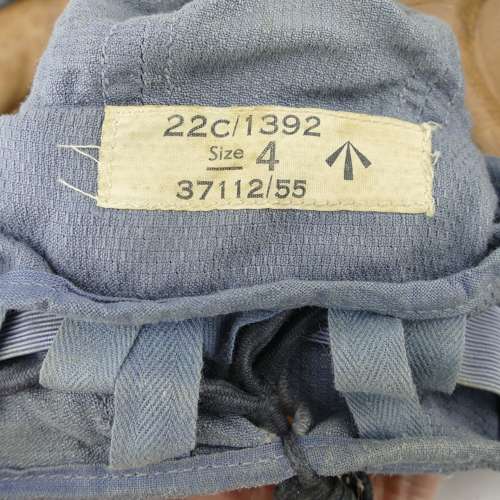 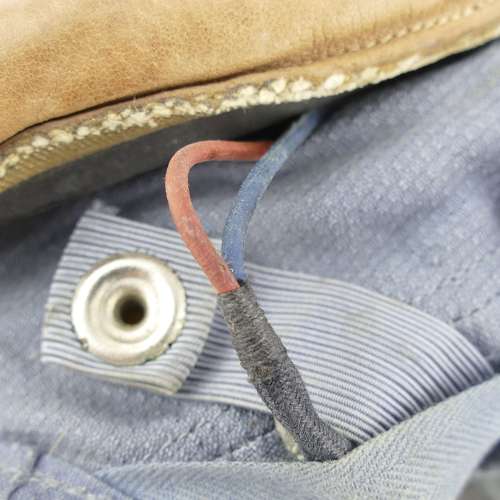 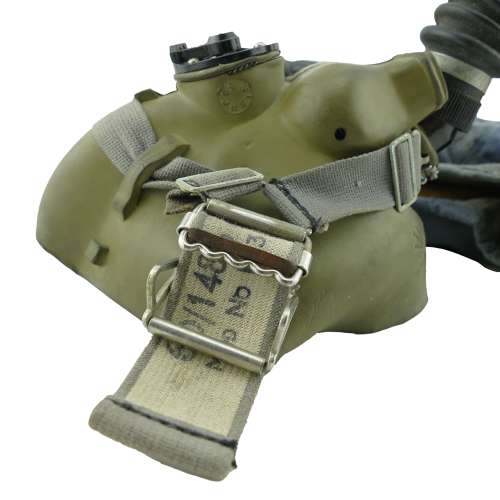 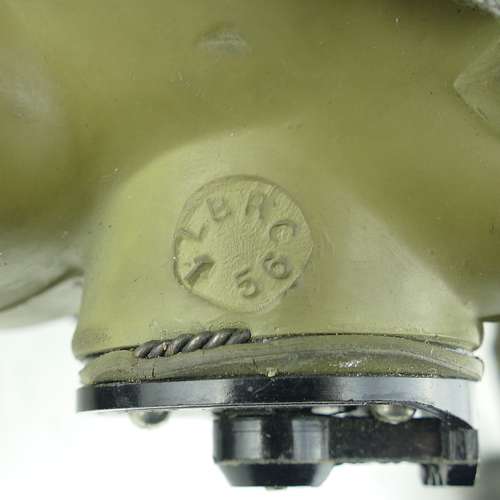 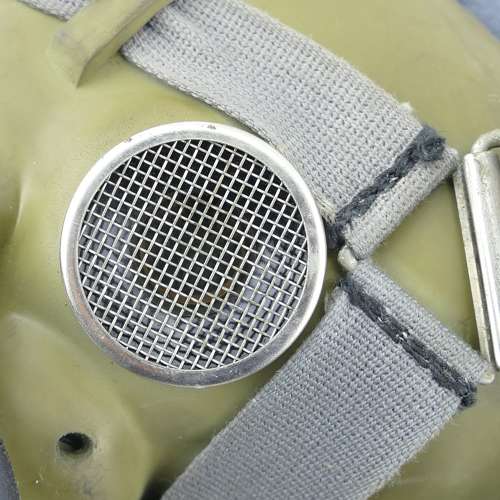 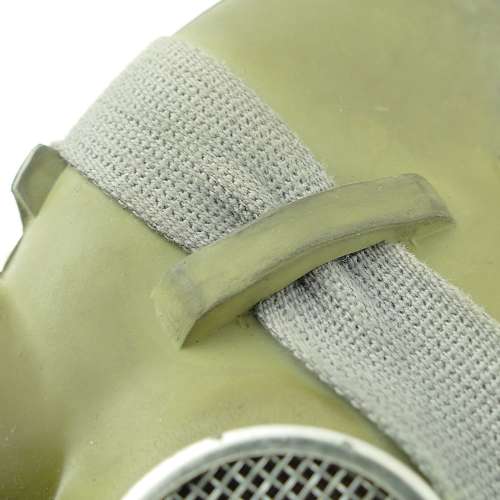 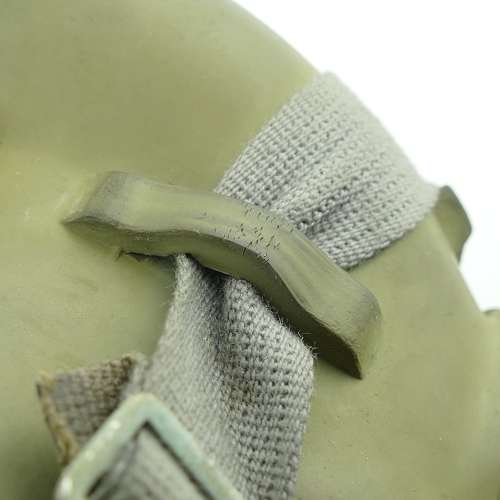 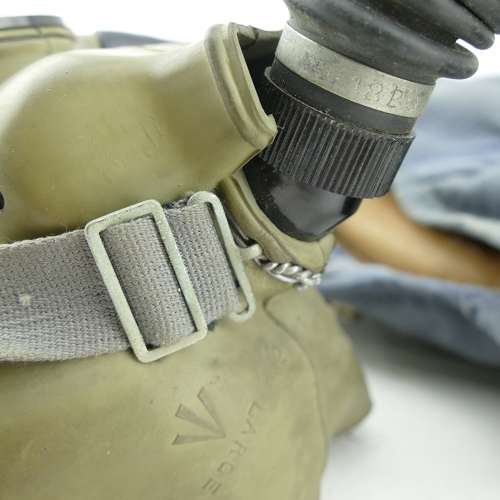 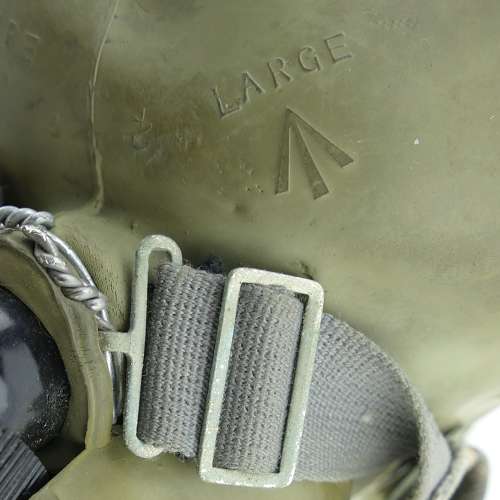 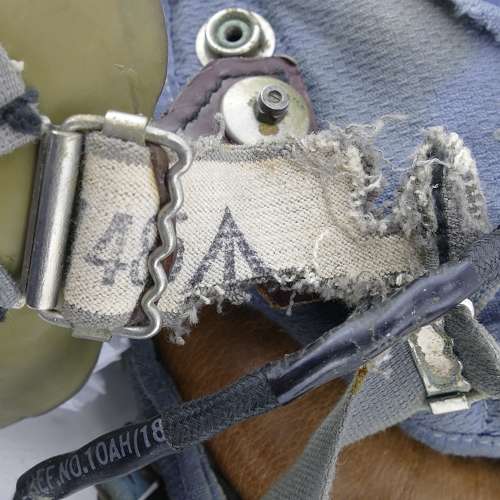 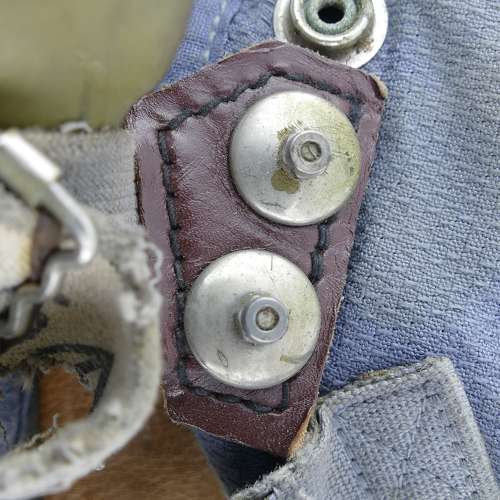 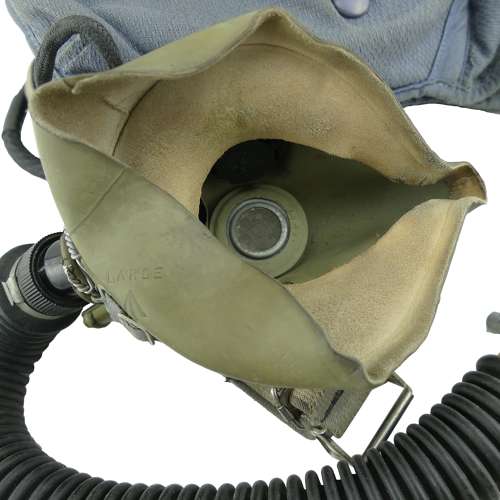 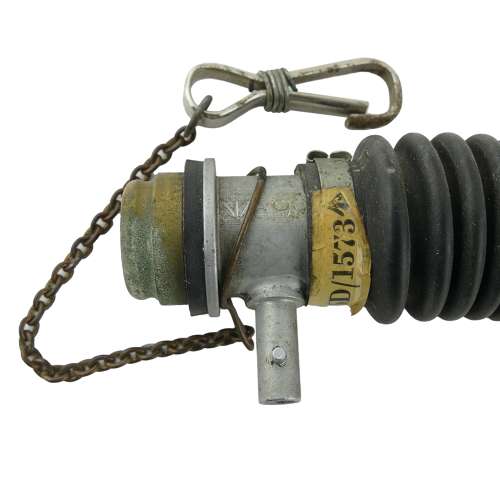 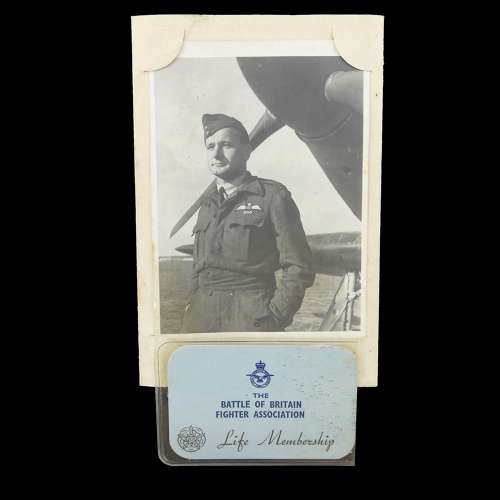 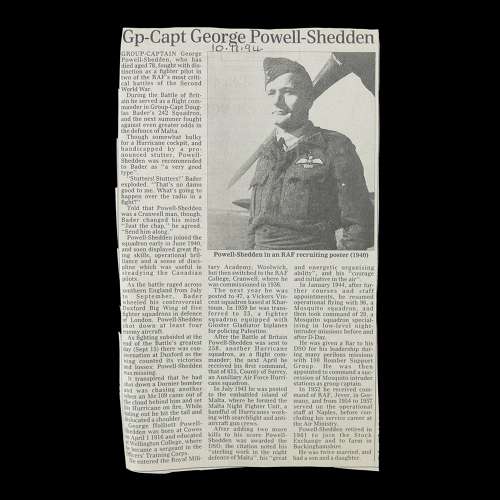 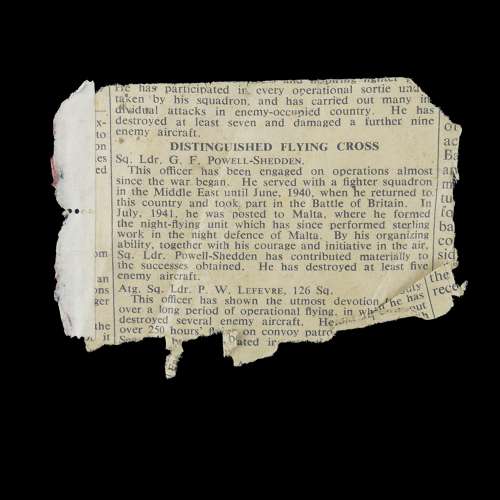 Postwar flying headgear of Battle of Britain pilot Group Captain George Powell-Shedden DFC, DSO & bar.  Comprised of an extremely rare blue cloth Type F helmet and  a Type H oxygen mask.  The helmet, stores reference 22c/1392, size 4, is 1955 dated.  The Type 'F' was the first helmet designed for use with the MK.1 bonedome and predates the later and far more common Type 'G'.  The cloth shell has a hole in the outer layer of the left side and is a bit grubby/worn but is otherwise in good condition.  Fully wired with instrument cord (loom) type 10041, stores reference 10HA/13158, receivers and NATO plug, all in very good condition.  The avionics  have been tested and do work but this does not indicate suitability for flight.  Fitted with reasonably clean soft leather earpads.  Initialled 'P-S' (Powell-Shedden) on each earpad and on the outer cloth shell. The type H mask, size large, was manufactured by the Leyland & Birmingham Rubber Company in 1955.  The facepiece retains reasonable overall shape although the lower edges are curling inwards.  The rubber is a bit grubby but remains very pliable and free of any major cracking.  The pearl grey suede lining is complete with light even soiling.  Fitted with a type 57 microphone assembly.  The webbing harness is complete but grubby and has some damage as shown.  The mask is fitted with a very good corrugated oxygen hose with a quick release connector with portable oxygen supply pipe.

Group Captain George ffolliott Powell-Shedden DSO, DFC, was born at Cowes, Isle of Wight, on 1st April 1916, the son of Colonel Richmond Powell, Royal Artillery.   He was educated at Wellington College where he became a Sergeant in the Officers' Training Corps before securing a place at Cranwell in 1935.  He served with 47 & 33 squadrons in the Middle East until June 1940, when he returned to the UK and served as flight commander in Group Captain Douglas Bader's 242 Squadron at Coltishall.  He displayed great flying skills, operational brilliance and discipline, resulting in a shared 'kill' of a Do17 in August 1940, a Bf109 on the 7th September and another Do17 on the 9th.  On 15th September he destroyed another Do17 and shared one more.  Following this he was shot down by Bf109s over Rye and had to bail out.  During this his foot was caught in the canopy and he struggled to exit the fighter as it rapidly lost alititude.  At 1500' he managed to dislodge his shoe (stubbornly worn by Powell-Shedden in preference to boots) and fall clear.  He just managed to clear some high tension cables and landed safely, albeit with a dislocated shoulder that was treated at Rye hospital.  His Hurricane, P2884 crashed at Church Farm, Udimore.  In November 1940 he was posted as flight commander to 258 Squadron.  In 1941 he was moved to the Mediterranean where he commanded a new night fighter squadron during the siege of Malta.  On August 11th 1941 he damaged a Fiat BR20, on the 26th shared in damaging two more Fiat BR20s and on 26th, destroyed a Cant Z1007.  In December he was promoted to Acting Wing Commander and awarded the DFC.  In 1944 he commanded 29 Squadron at West Malling, flying Mosquitos on intruder missions against Luftwaffe night fighters over France before and after D-day.  Post WW2 he competed in the British bobsleigh team in the 1948 Winter Olympics and commanded RAF Jever, West Germany.  He then served on the staff of NATO's headquarters in Naples before taking early retirement in 1961.  It is thought that he would have risen to higher ranks had it not been for his lifelong pronounced stammer.  With at least four enemy aircraft destroyed, four shared 'kills' and one 'damaged', Powell-Shedden was familiar to many during the war as his photograph was used by the Air Ministry as part of a recruiting campaign.  He then worked at the stock exchange for next 20 years and died of a stroke on October 31st 1994 at the age of 78.  A rare oportunity to obtain flying clothing used by a Battle of Britain pilot.  Sold with a photocopy photograph of him in uniform.  Stock code H26380/1.

NB. Photographs, newspaper clippings and Battle of Britain Fighter Association card are not included in the sale.