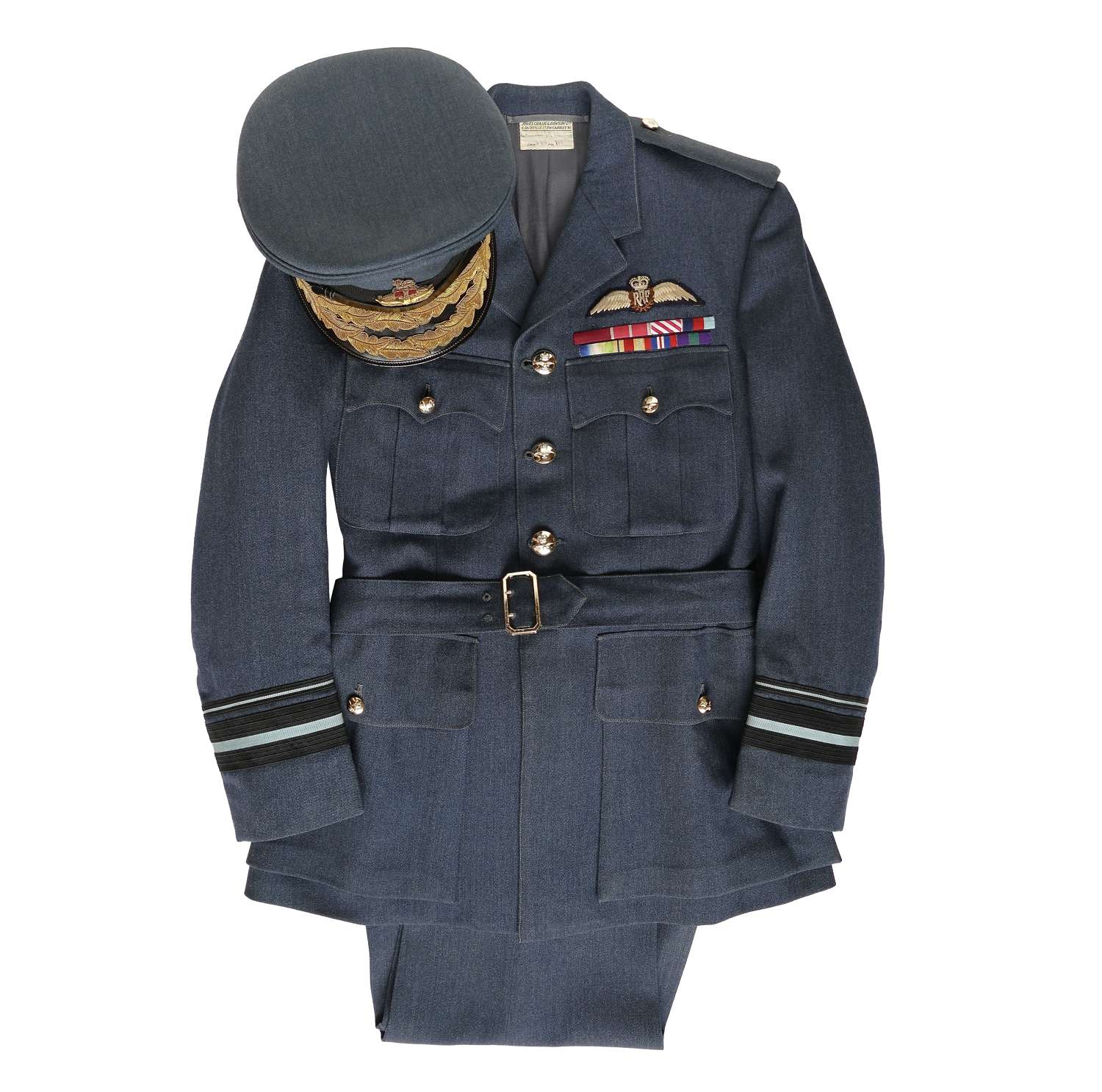 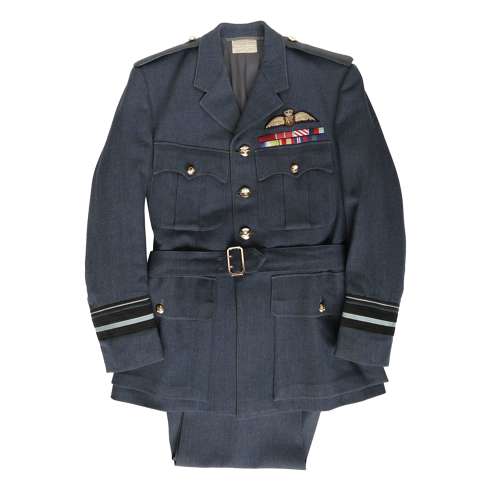 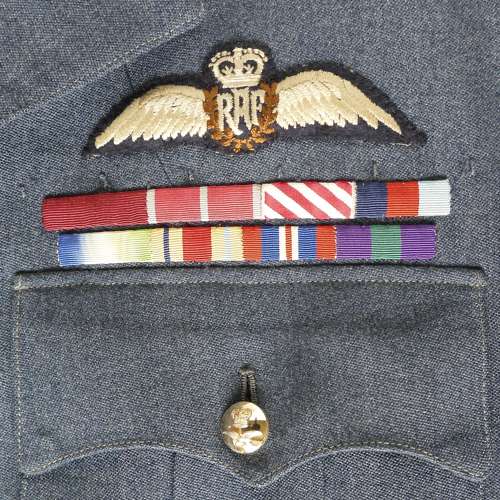 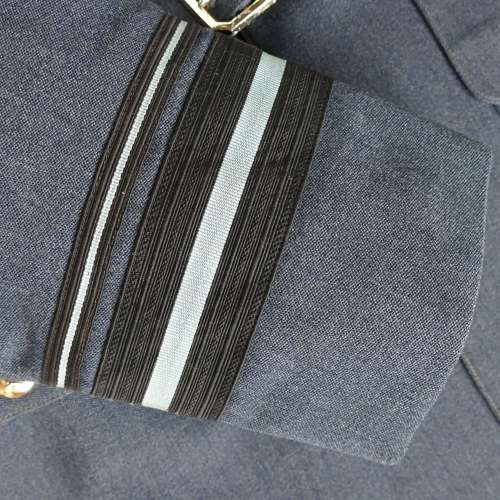 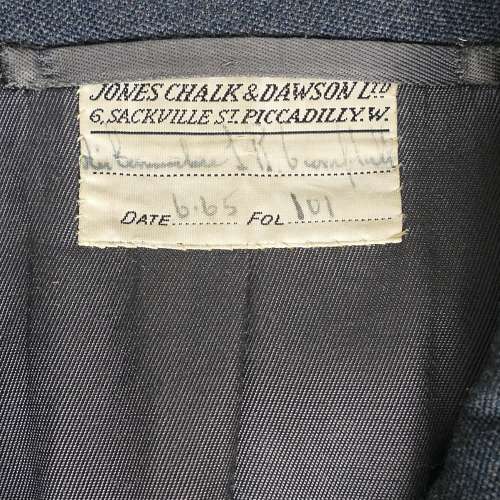 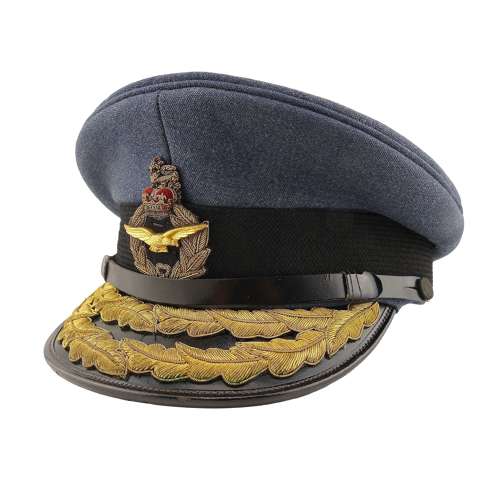 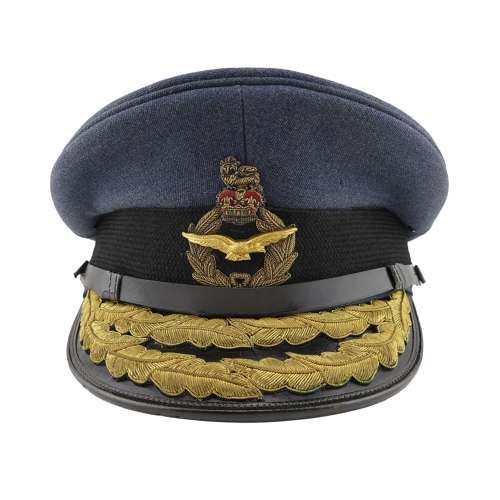 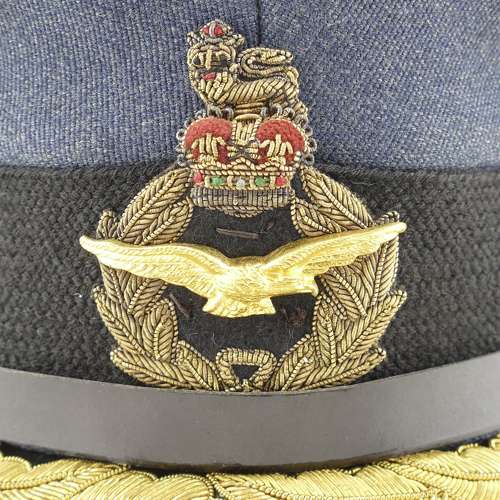 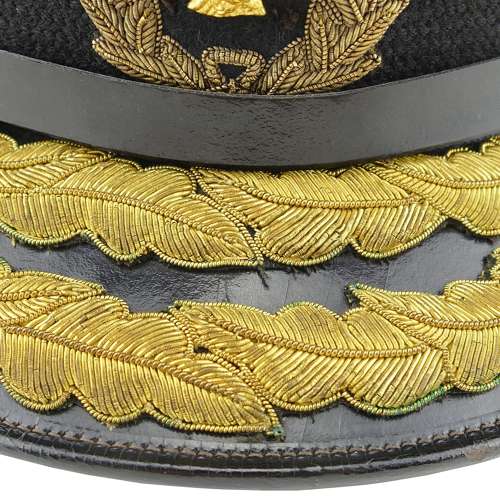 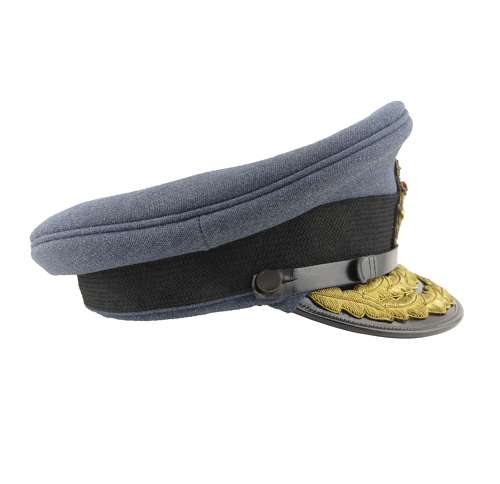 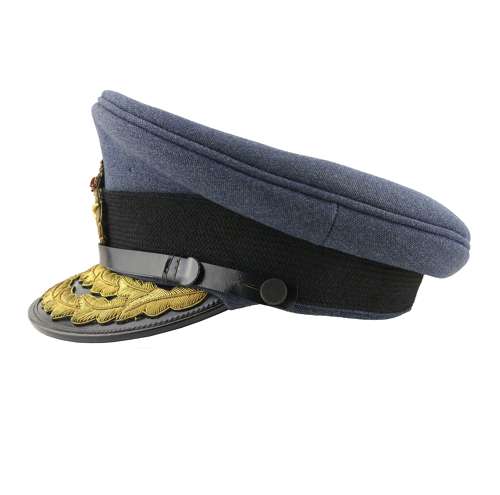 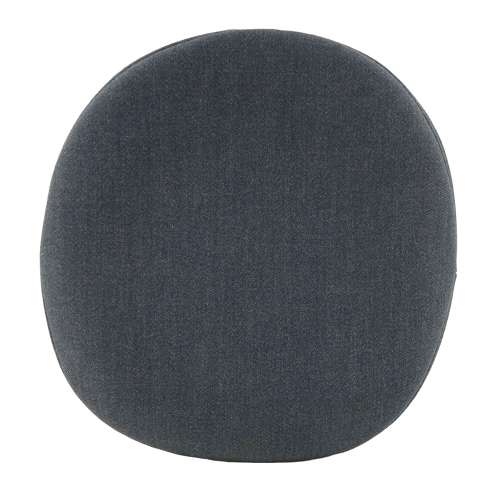 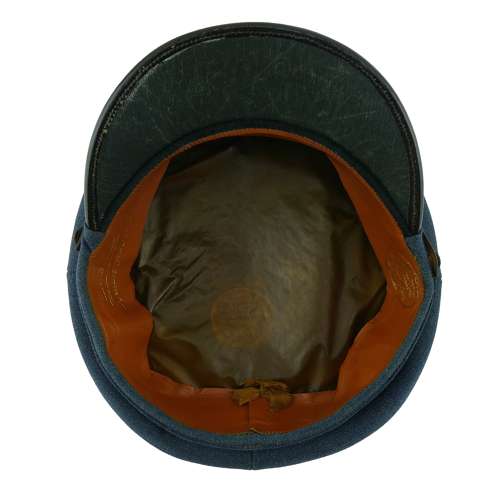 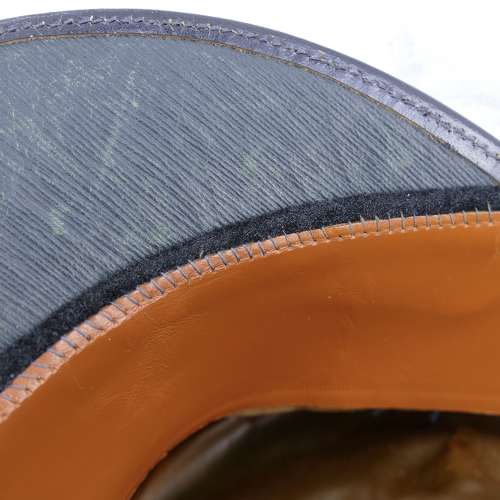 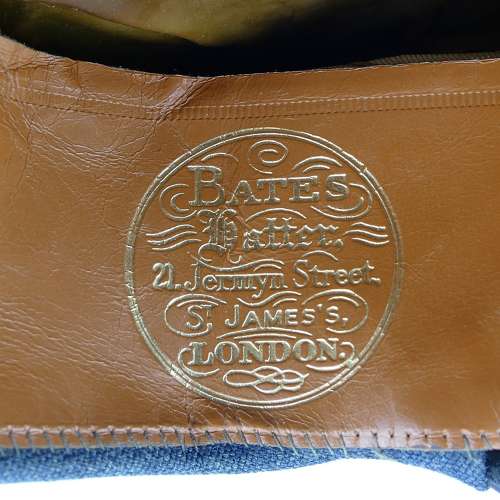 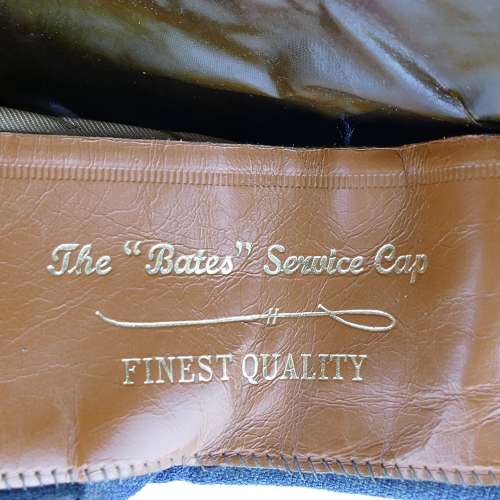 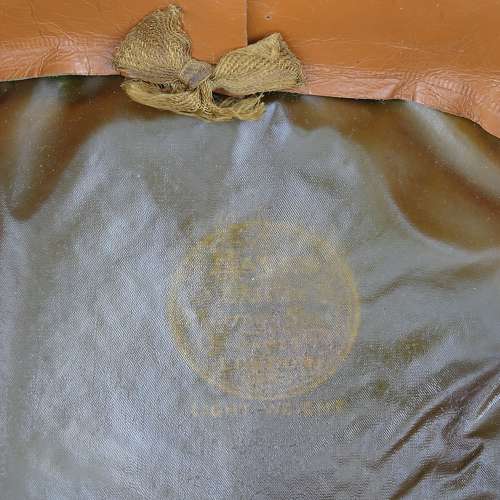 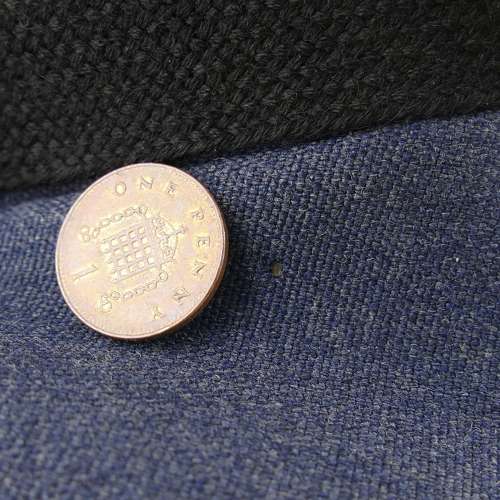 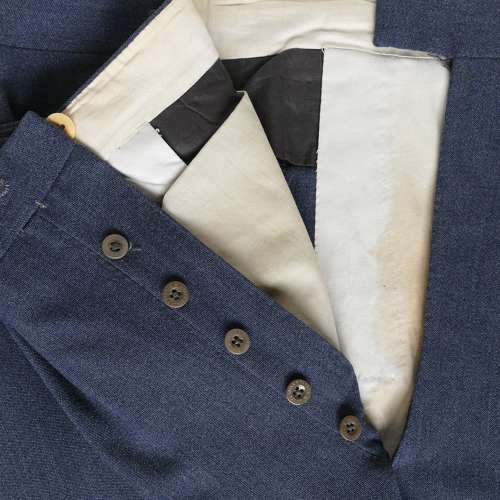 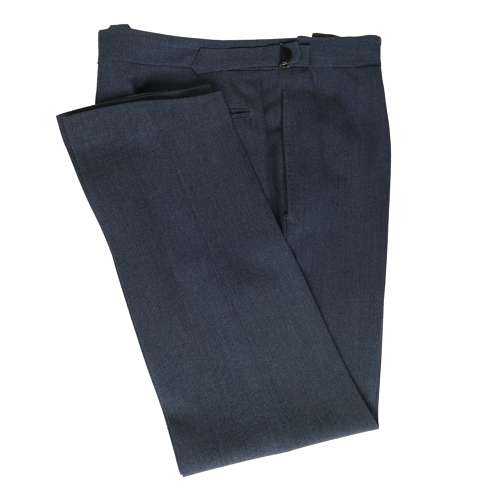 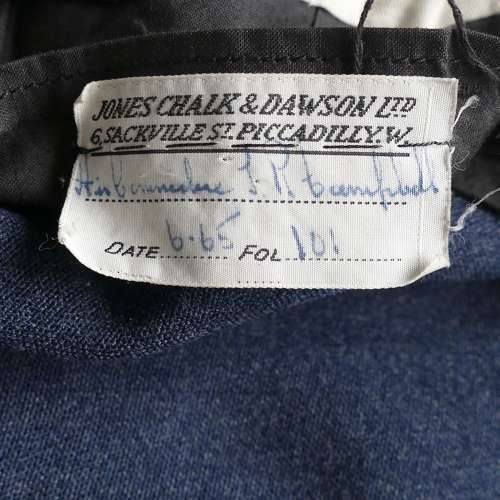 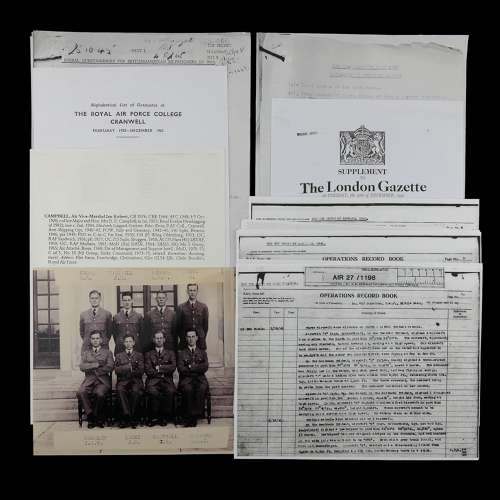 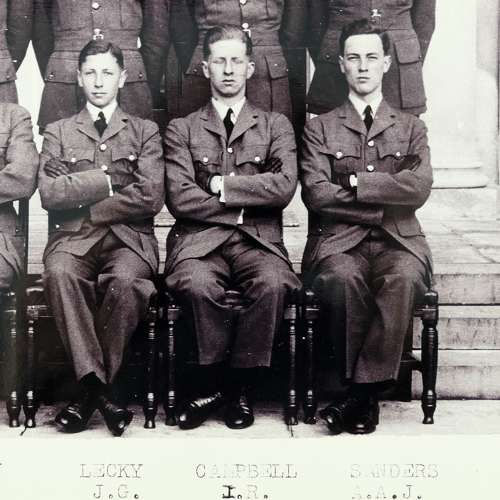 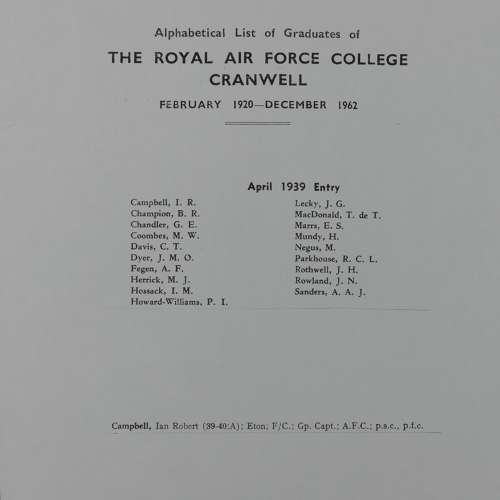 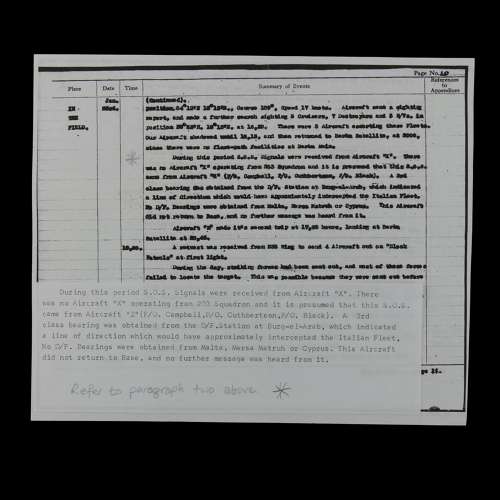 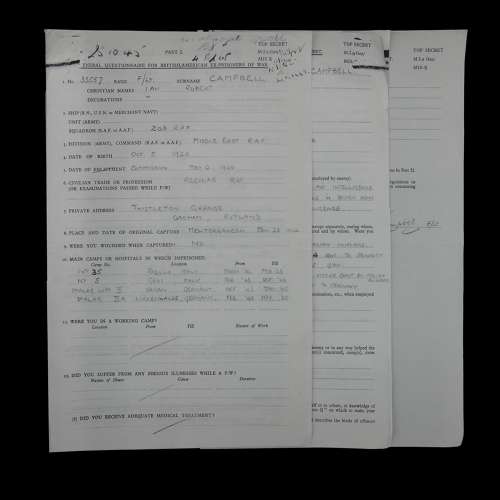 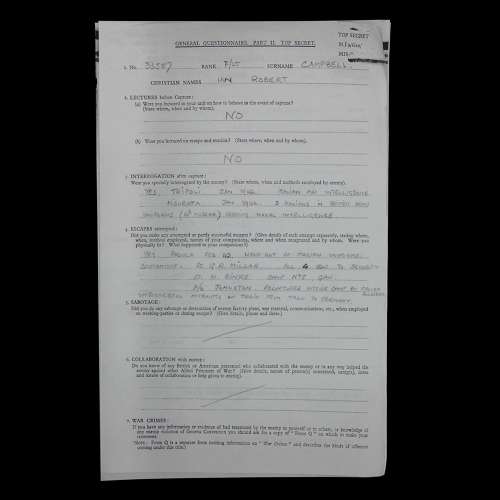 Extremely rare service dress uniform to Air Vice Marshal Ian Robert Campbell, CB, CBE, AFC.  He was born on October 5th 1920, son of the late Major and Hon. Mrs. D.E. Campbell, educated at Eton, then commissioned to RAF College Cranwell c. May 12th 1940.    His initial service was as a pilot officer on anti-shipping operations with 203 Squadron (Middle East).  On 23rd January 1942, Bristol Blenheim IV, V5861 'Z', piloted by Campbell, took off with the rest of the squadron from Berka, Libya at 1100hrs, for a reconnaissance sortie of the Italian Battle Fleet.  This was sighted and its size (1 Battleship, 4 Cruisers, 5 Destroyers) and position reported, with some aircraft returning to base.  Other aircraft appear to have been fired on and pursued by enemy fighters.  The Squadron ORB states that 'during this period, S.O.S. signals were received from aircraft 'X'.  There was no aircraft 'X' operating from 203 Squadron and it is presumed that this S.O.S. came from aircraft 'Z' (F/O Campbell, P/O Guy Donald Cuthbertson RAAF - Observer, P/O Frederick Alexander Black - WOp/AG).  A 3rd class bearing had been obtained from the Direction and Finding Station at Berge-el-Arab indicating a line of direction which would have approximately intercepted the Italian Fleet.  Direction Finding Bearings had not been obtained from Malta, or Cyprus, the aircraft did not return to base, and no further message was heard from it'.  It would seem that their aircraft was shot down by Anti Aircraft fire or an enemy aircraft and ditched in the sea.
The crew were not wounded and were taken prisoner the same day.  According to his MI9 capture/pow questionnaire, Campbell was interrogated at Tripoli by Italian Air Intelligence and again at Misurato when two Italians in British Army uniforms (10th Hussar)attempted to extract Naval Intelligence.  He attempted escape  in February 1942, walking out in an Italian uniform with others.  They were captured and sent to Security Camp No.5, Gavi. (February '43 - September '43).  Further unsuccessful escape attempts were made on the train between Italy & Germany en route to Stalag Luft III, Sagan (October '43 - January '45).  Later he was moved to Stalag IIIA, Luckenwalde (February '45-May '45).
After the war he was a graduate of the RAF Staff College (1950) and appointed Personal Staff Officer to Commander in Chief, H.Q. Far East Air Force in Changi, Singapore, with the rank of Wing Commander.  In 1958 he was a graduate of the RAF Flying College and joined the Chief Plans Division, 2nd Allied Tactical Air Force in Germany.  Promoted to Group Captain in 1960 and appointed Deputy Director, Directorate of Air Staff Planning in the Department of the Chief of the Air Staff, Ministry of Defence c. 1964.  In 1965 he was Senior Staff Officer, Air Staff, No.1 Group Bomber Command, RAF Bawtry, Yorkshire and promoted to Air Commodore.  In 1968 he was appointed Air Attache at the British Embassy in Bonn (BFPO) and in 1970 promoted to Air Vice Marshal.  In 1973 he was appointed Chief of Staff, Air Staff, No.18 Group, Strike Command, HQ RAF Northwood, Middlesex.  Campbell retired in 1975 and died on 18th October 2001.

Here we are offering Campbell's No.1 Service Dress uniform with the rank of Air Vice Marshal, obtained directly from the family by the previous owner.  It has superb padded Queen's crown pilot wings, staybrite belt buckle and Queen's crown buttons, Air Vice Marshall rank lace on the cuffs and medal ribbons for The Most Honorable Order of the Bath Companions (C.B.), The Most Excellent Order of the British Empire (C.B.E.), Air Force Cross (A.F.C.), 1939-45 star, Atlantic star, Africa star,  War medal and General Service medal.  The tunic, tailored by Jones, Chalk & Dawson Ltd. of Sackville Street, Picadiilly, is in excellent condition, named to him and 1965 dated.  This comes with a pair of matching button-fly trousers, also named/dated.  Finally there is his 'Air Rank' service dress peaked cap by Bates of Jermyn Street, London, complete with Queen's crown Air Rank badge and twin rows of bulllion leaves on the leather peak.  It is in excellent condition.  Along with the uniform we have a few biographical details, copies of the Squadron ORB, his post-capture MI9 questionnaire etc.   Stock code U26366/9.