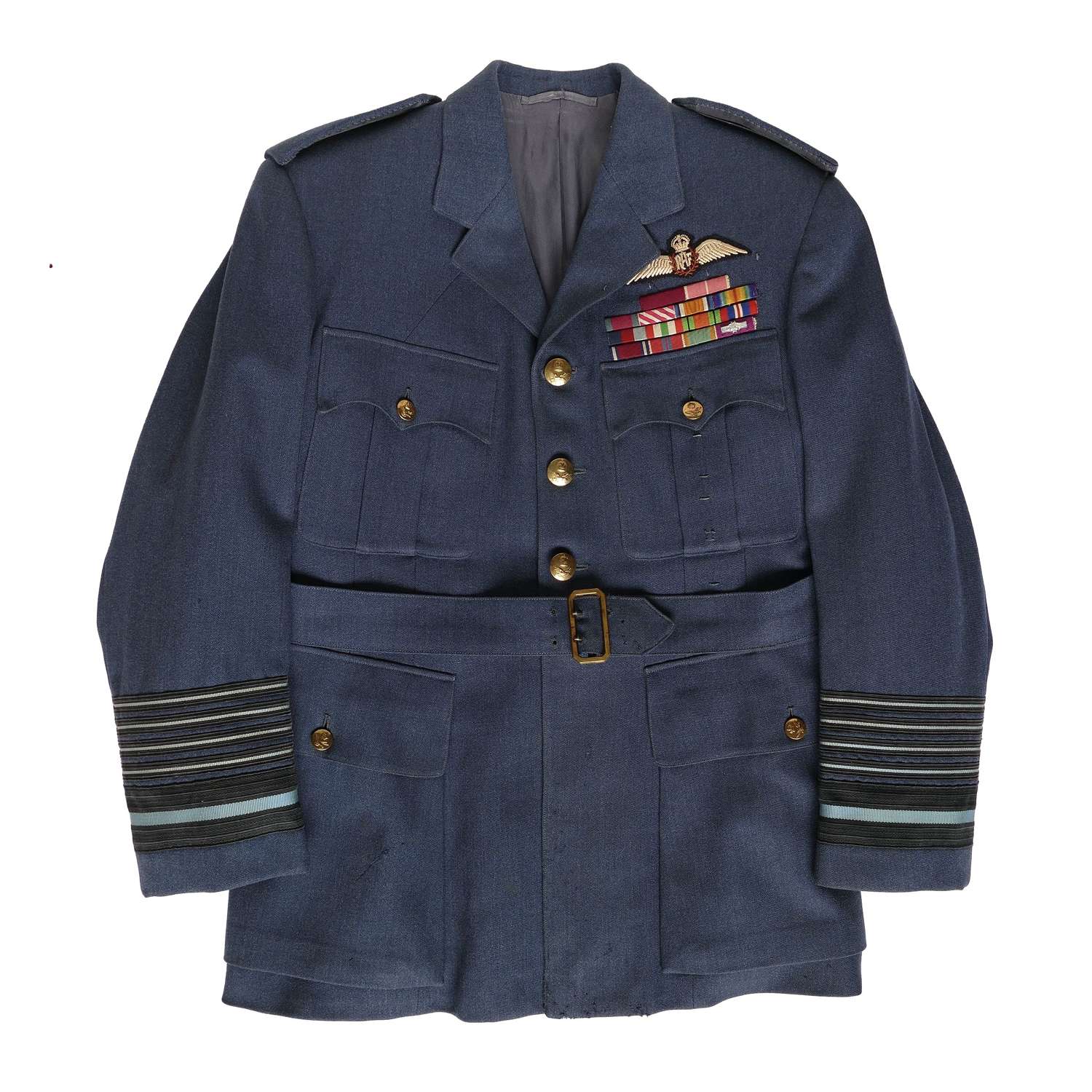 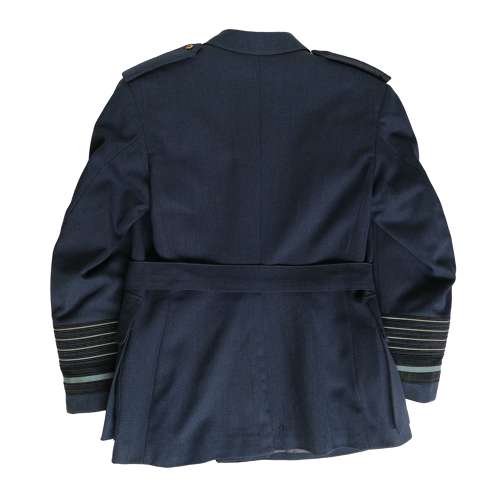 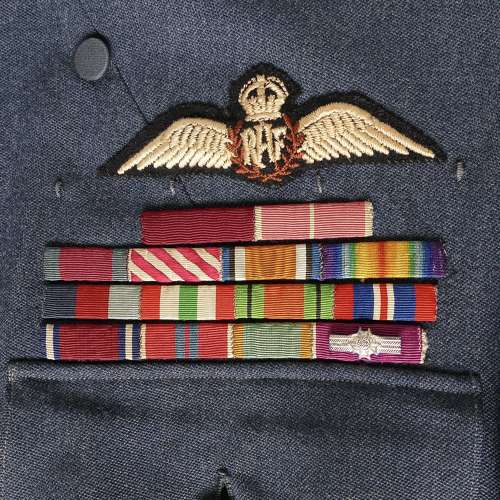 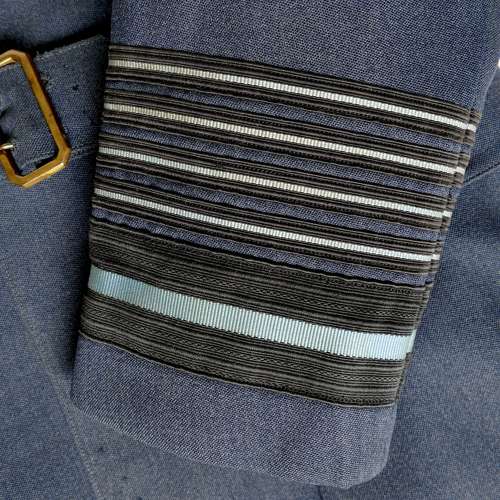 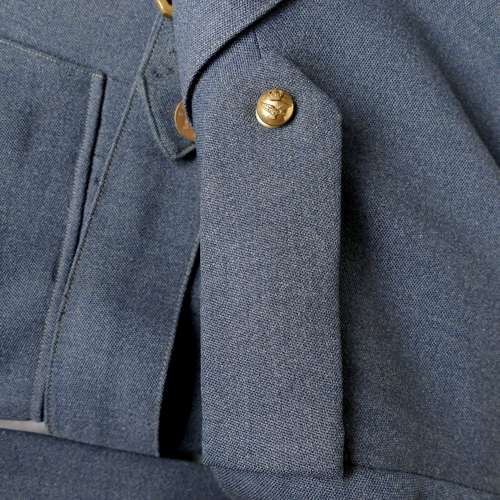 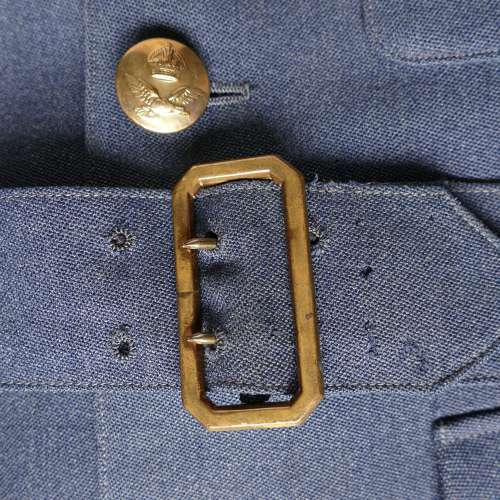 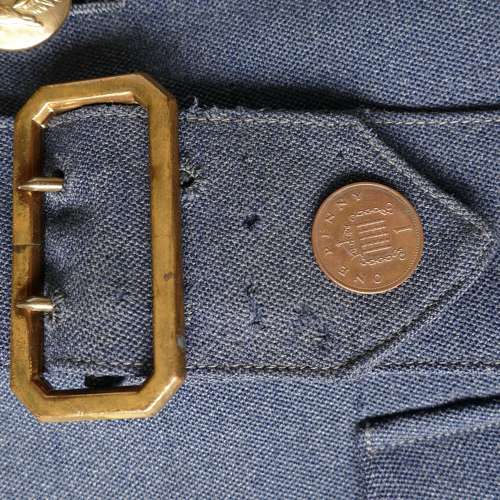 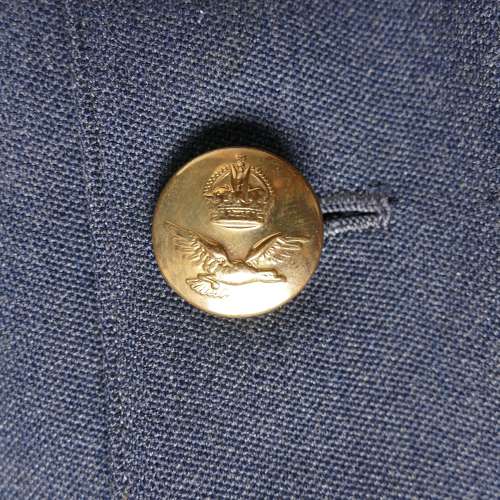 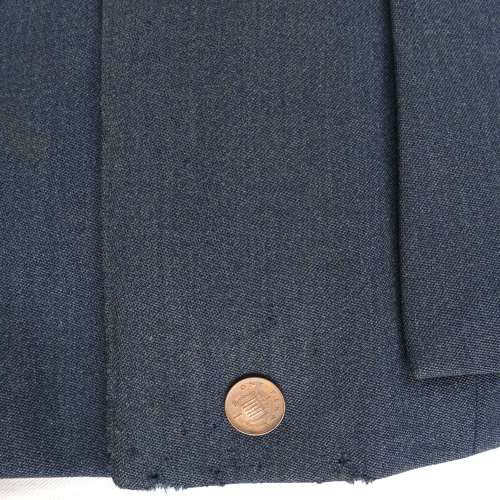 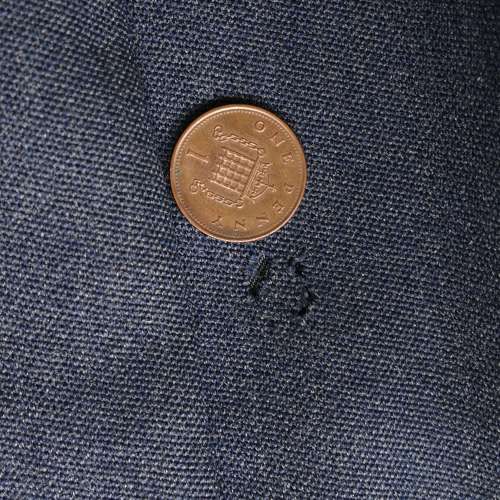 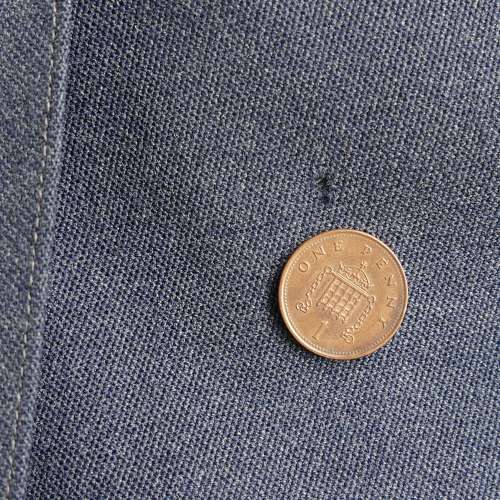 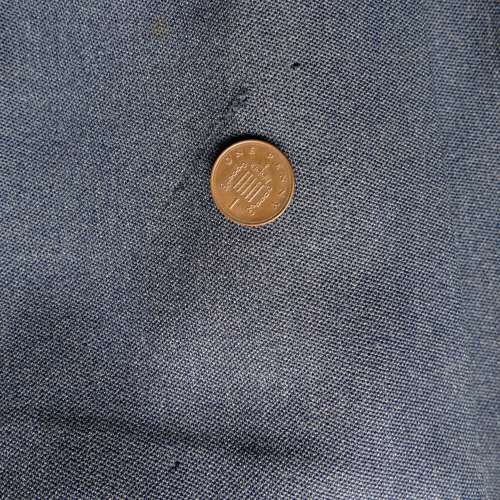 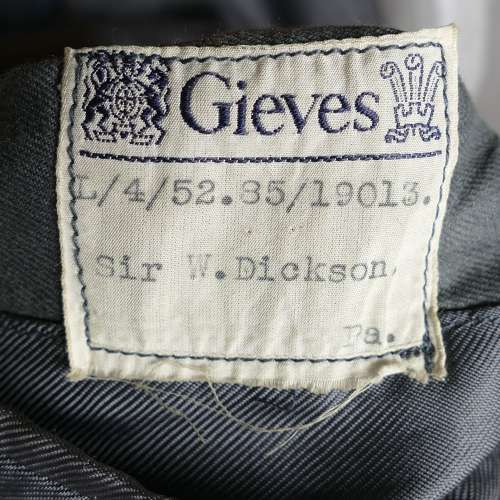 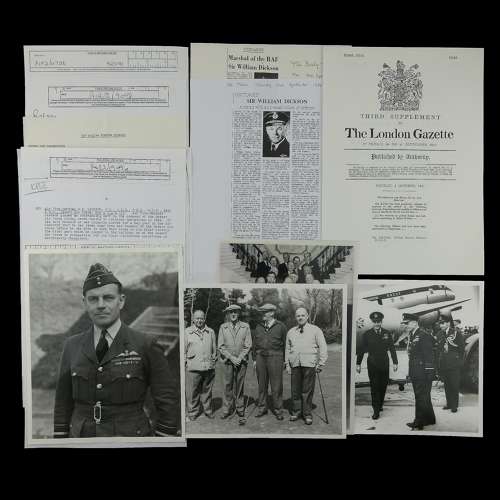 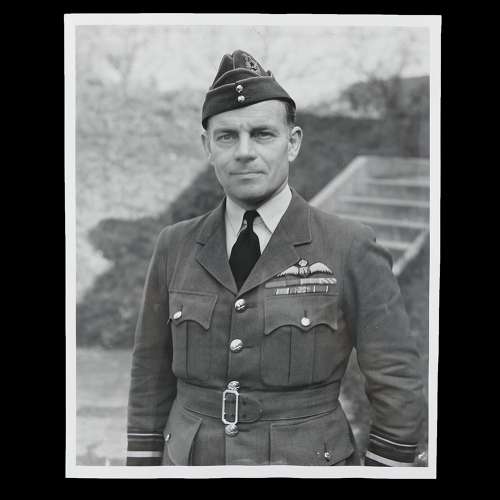 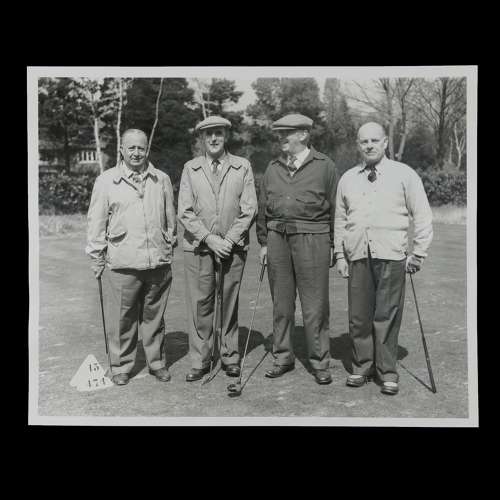 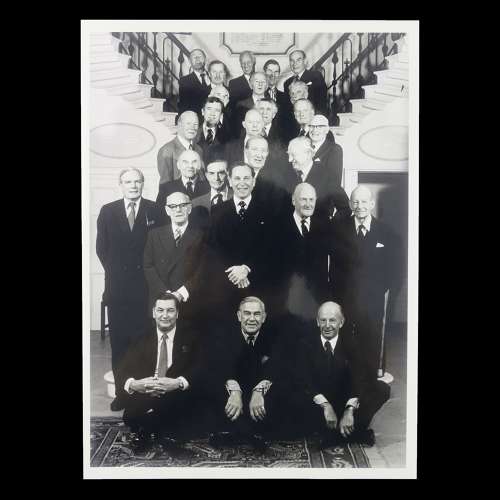 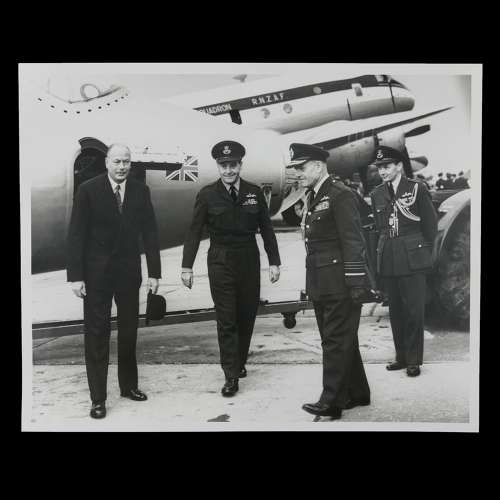 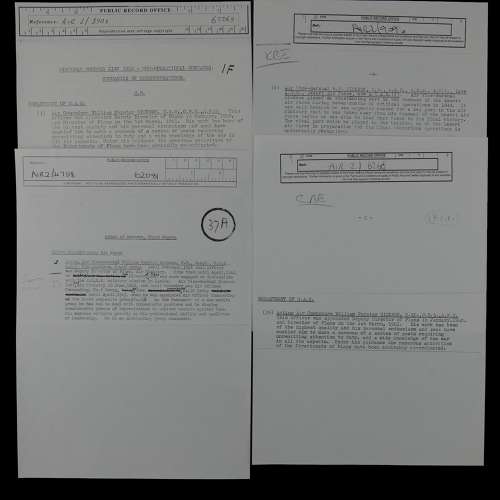 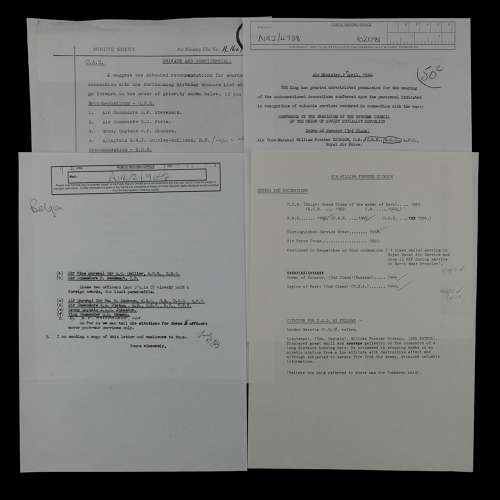 Uniform to Sir William Forster Dickson, Marshal of the RAF

Rare No.1 Service Dress tunic of the late Sir William Forster Dickson GCB, KCB, CB, KBE, CBE, OBE, DSO, AFC, Marshal of the R.A.F. (MRAF).  He was born at Northwood, Middlesex on September 24th 1898, only child of Campbell Cameron Forster Dickson and  Agnes Nelson-Ward, a direct descendant of Lord Nelson & Lady Hamilton.  He was educated at Haileybury College, Hertfordshire, after which he had a temporary job working on aero engines before being commissioned into the Royal Naval Air Service c. 1916.  Qualifying as a pilot, he served with the Grand Fleet aboard HMS Furious on North Sea & Channel patrols.  It was during this time that he became a pioneer in deck landings, undertaking the first and only aircraft carrier based raid in history and the only one of the war, for which he was awarded the Distinguished Service Order (DSO) for attacks on a German Zeppelin station at Tondern.  He was also mentioned in despatches on three separate occasions.  At the end of the war he was posted to HMS Revenge as Squadron Aviation Officer and in 1919 given a permanent commission into the recently formed RAF.  Initially his involvement continued as pilot with his old service, in what became the Fleet Air Arm, but he soon returned to the RAF as a test pilot at the Royal Aircraft Establishment, Farnborough, for which he was awarded the Air Force Cross (AFC) in 1922.  Dickson then had three years as a staff officer at the Air Ministry with responsibility for naval/air operations under Sir Hugh Trenchard.  In 1926 he returned to flying duties with 56 Squadron based at Biggin Hill.  He then completed a staff course, served in India in both operational and staff capacity and returned to the UK to command 25 Squadron, flying Hawker Fury 1s,  based at Hawkinge.   At the outbreak of WW2 he was called upon to use his exceptional skills and posted to the Directorate of Plans in the Department of the Chief of Air Staff at the Air Ministry, working closely with Churchill and the Chiefs of Staff over the next two years and becoming director in March 1941.  Between 1940 and 1941 he was promoted from Group Captain to Air Commodore.  During 1942/3 he was given command of first 9, and then 10 Squadron, Fighter Command and then spent a year preparing 83 Group, 2nd Tactical Air Force for the Normandy invasion.  In April 1944 he went to Italy as commander of the Desert Air Force providing air support for the British Eighth and American Fifth armies.  At the end of 1944 he was appointed Assistant Chief of the Air Staff (policy).  After the war he was promoted to Air Marshal as Vice-Chief of the Air Staff, working under Lord Tedder.  In March 1948 he became Commander-in-Chief in the Middle East.  Dickson returned to the Air Ministry in 1950 as Air Member for Supply & Organisation, working on an expansion programme necessitated by the Korean war.   He was appointed Chief of Air Staff in January 1953, receiving the full support of Churchill during his key roles in the planning and preparations for the RAF's nuclear deterrent.  In 1954 he became Marshall of the RAF, in 1957 Chief of Staff to the Minister of Defence and in 1958 appointed the first Chief of the Defence Staff, a post he relinquished to Lord Mountbatten the following year.  He died on 12th September 1987 at the age of 89 having been the most senior Marshal of the RAF after Prince Philip.

Here we are offering Dickson's No.1 service dress tunic c.1952, with the highest attainable rank of  MRAF.  Tailored by Gieves, it has a beautiful padded King's crown pilot wing in silky thread above the ribbons, including those for the CB, CBE, DSO, AFC, WW1 War & Victory, 39-45, Italy, Defence, War & Coronation medals plus the United States Legion of Merit and USSR Order of Suvorov etc.  It has King's crown brass buttons/cast buckle and Queen's crown brass buttons on the removable epaulettes.  Labelled, named to Sir W Dickson and April 1952 dated.   Overall condition is generally very good.  The barathea is quite clean and retains good colour but there is light moth damage to the lower areas of the front/pockets/hem and a couple of small holes to the rear.  Sold with assorted photographs of/relating to Dickson.  These include good Imperial War Museum images of him in uniform.  Others show him with other former Vice-Chiefs (all identified on a separate sheet), playing golf with Sir Frank Spriggs, Sir Sydney Camm & Sir James Barnes.  There are also biographical details, photocopies of the London Gazette pages relating to some of his awards, records copied from the PRO regarding some of awards/citation for the DSO, a couple of obituaries etc.

The rank 'Marshal of the RAF' was instituted in 1919 and the first officer to be promoted to MRAF was Sir Hugh Trenchard in 1927.  Since then, including Trenchard, there have been just 27 men who have held the rank.  An extremely rare opportunity to purchase a uniform belonging to one of these men.  Stock code U26468.