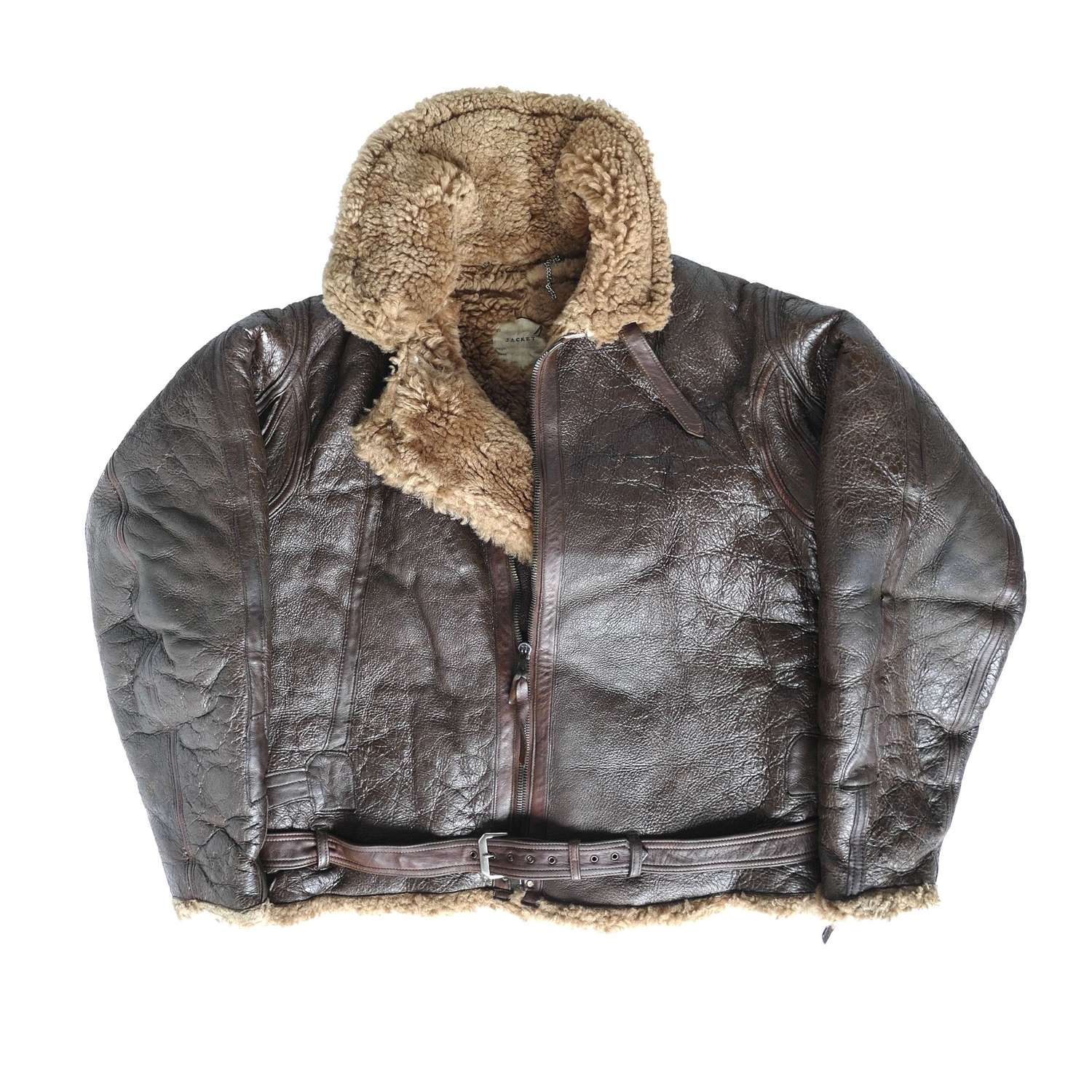 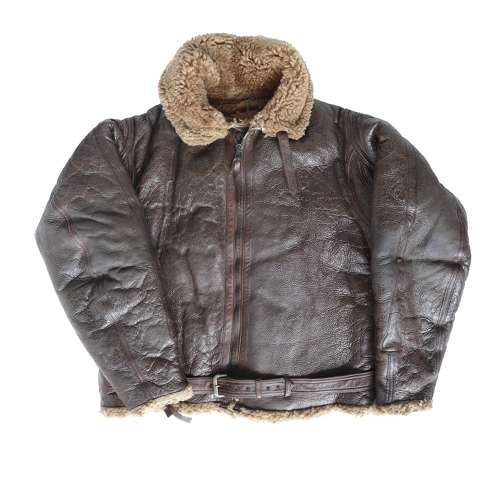 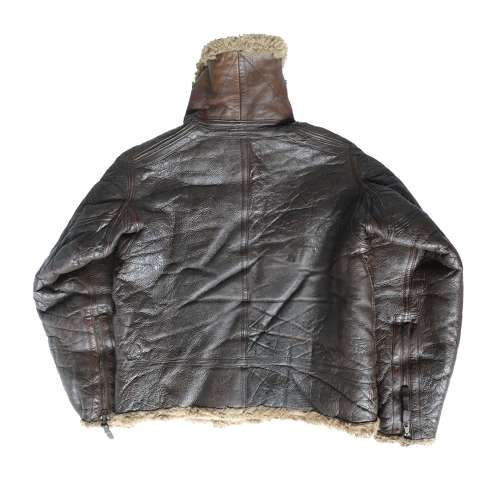 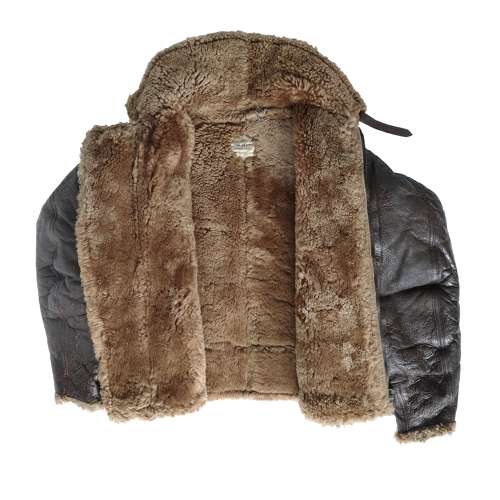 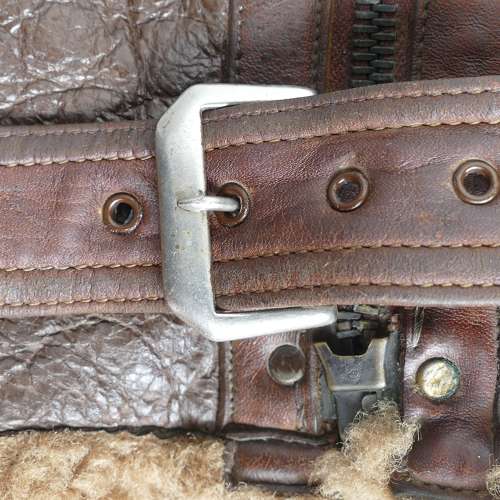 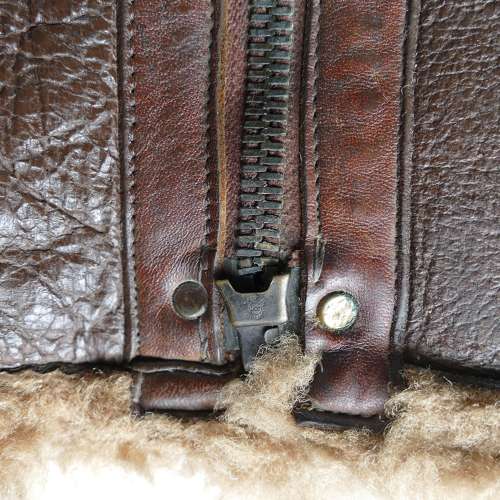 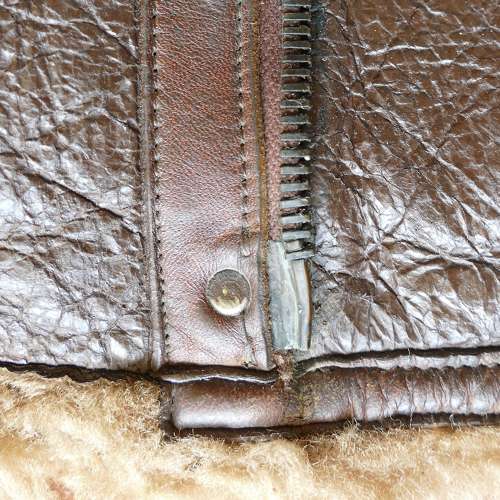 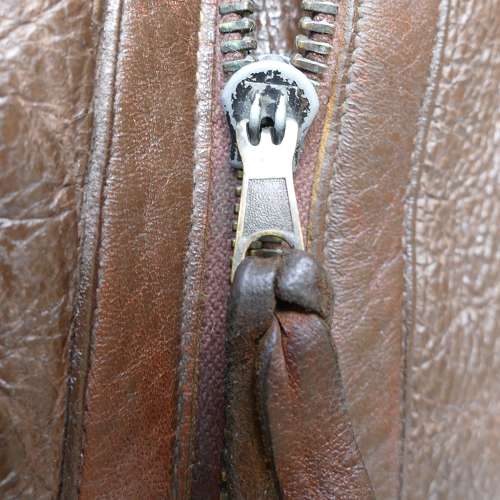 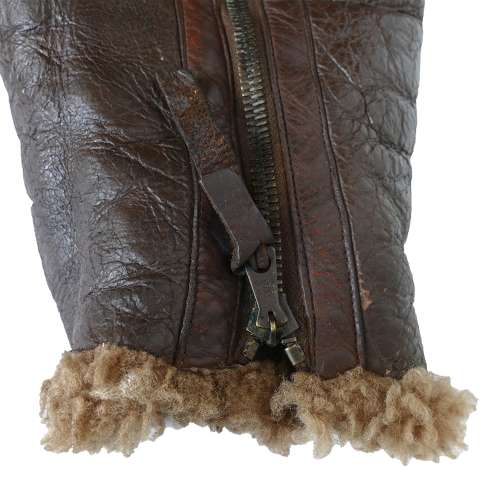 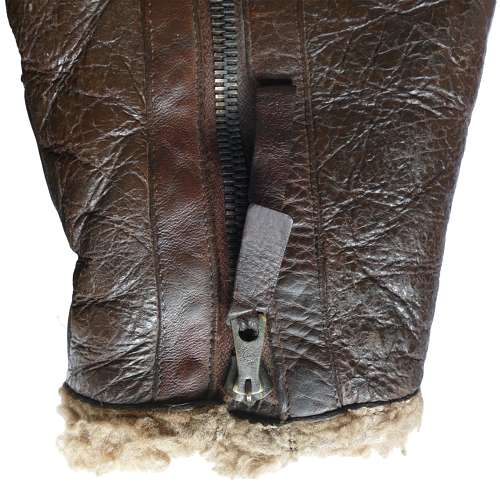 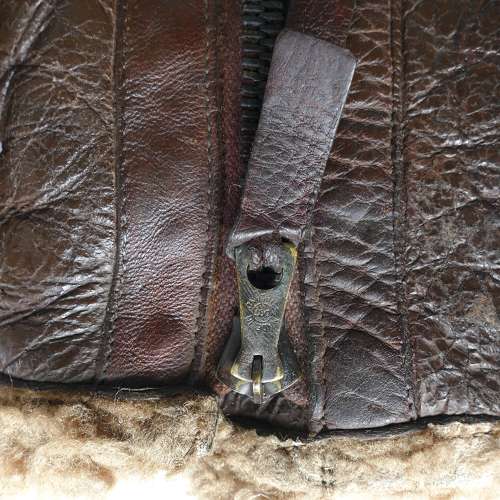 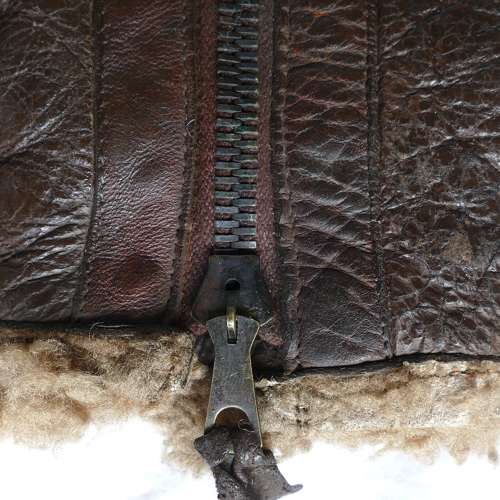 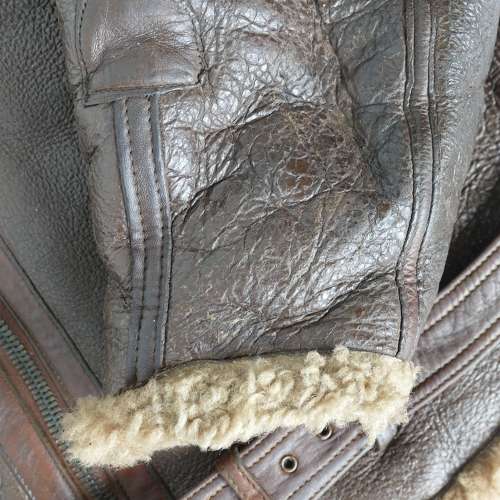 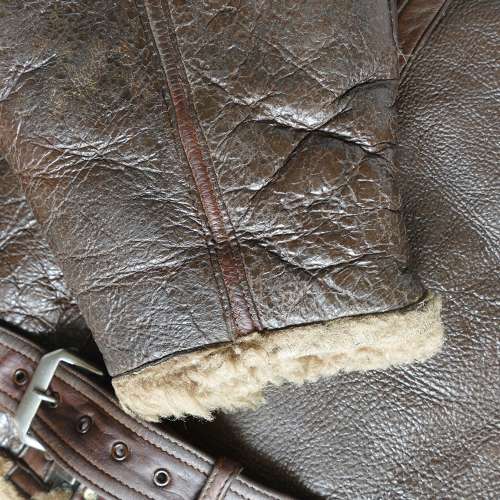 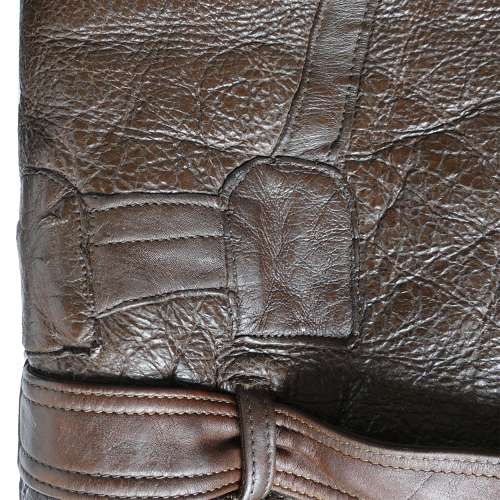 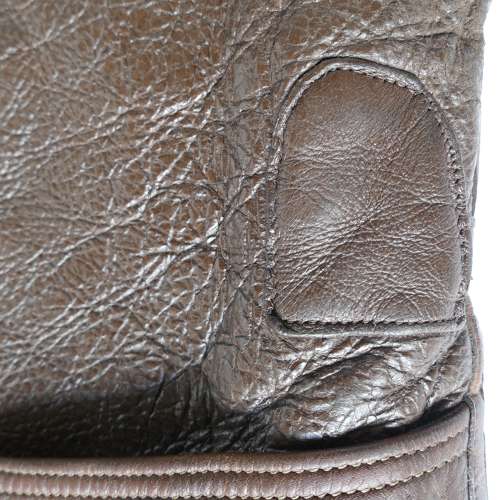 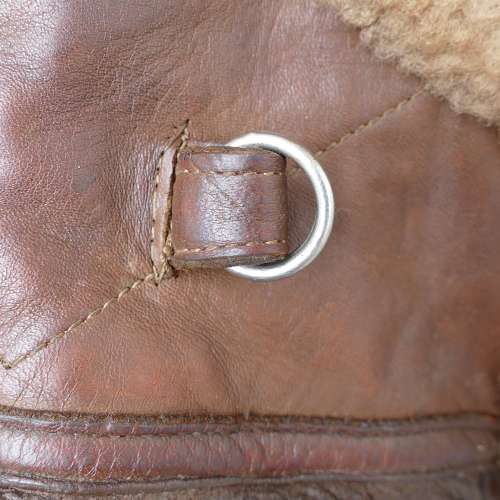 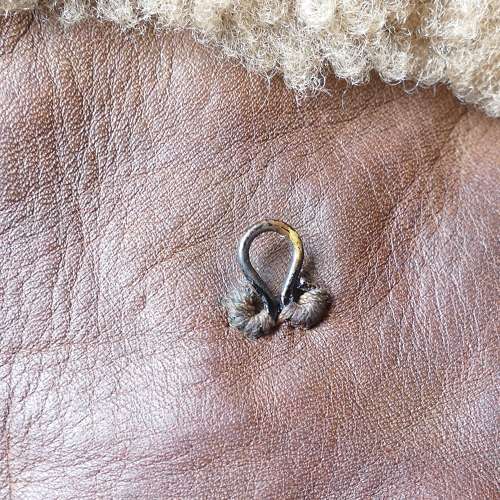 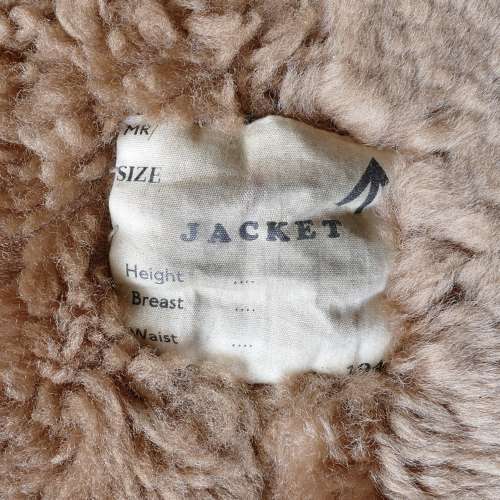 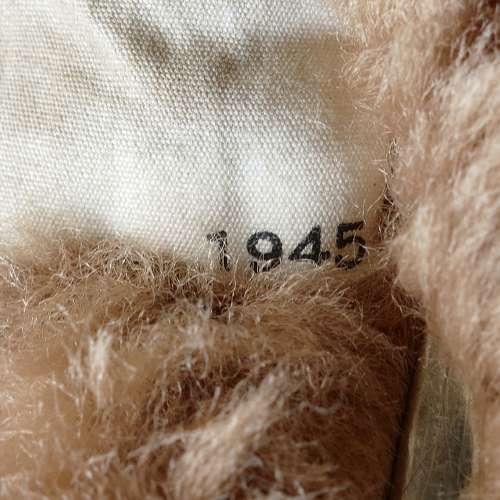 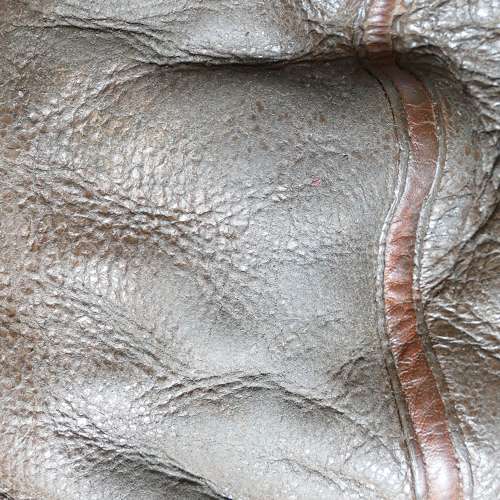 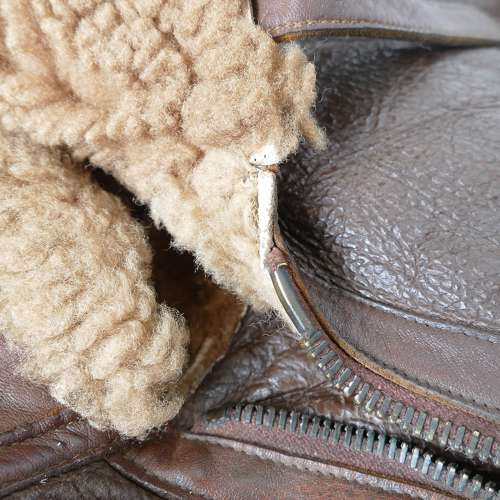 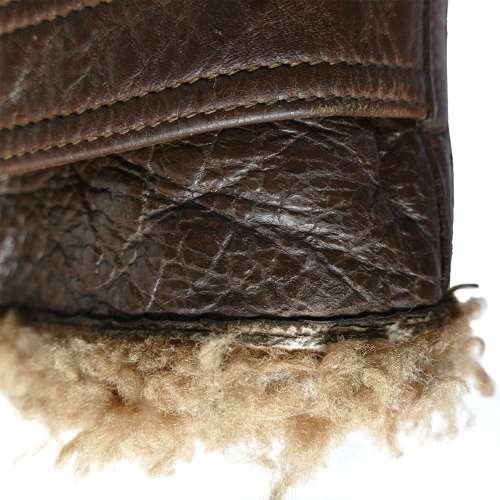 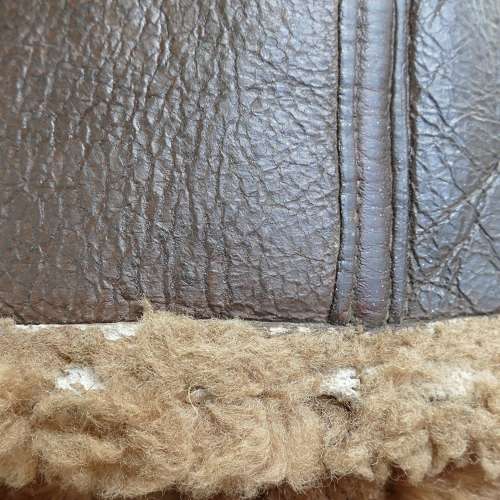 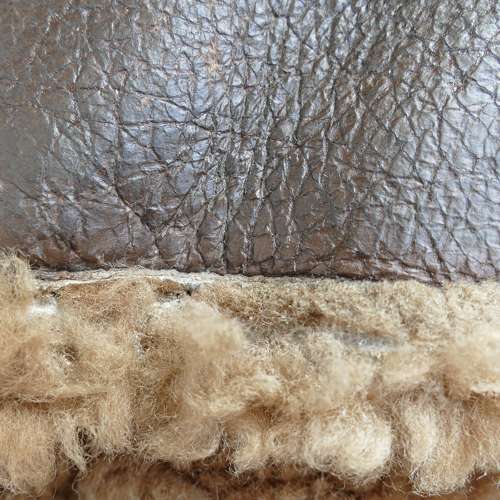 Electrically Wired Thermally Insulated Flying Suit, Jacket.  Size umarked but physically measures approximately 48” so should be suitable for around a 42 - 44” chest.  Classic early wired example with single panel fronts and just one centre seam on the back of the jacket.  Originally this was fitted with an integral wiring loom within leather channels sewn along each sleeve and across the lower back, to enable the use of R.A.E. heated gloves.  Short umbilical cords connected the jacket to matching trousers via a 2-pin socket.  Another umbilical connected the wearer to the aircraft via a larger alloy 3-pin plug (5c/2202).  The leather is in very good overall condition, appears to be strong, is very flexible and retains much of the original chromed finish.  There is some general wear but no damage or repairs.  All seams appear good and tight.  The wiring channels are in place but the loom and umbilical have been carefully stripped out.  It would be quite easy to reinstate the latter with some mock-ups if desired (the correct plugs are available from us).  Very good short dense honey coloured fur in the body and collar although there is some loss and slightly loose fur at the collar edges and waist.  Some wear/loss of fur at the cuffs.  The jacket retains good original D-o-T zips, each with leather puller tags and the waistbelt is complete and in good order.  The collar is fitted with fastening strap/rings and has eyelets to the rear for the elastic 'collar strap' (not present).  The jacket has a chain hanger (detached at one end) and the original war department broad arrow marked 1945 dated label.  It displays very well and is not as shiny as some of the photographs might suggest.  A very good example in a good size.  This belonged to Squadron Leader John Hardy Douglas DFC & bar.  He enlisted at Uxbridge in 1940, was commissioned in March 1941 and qualified as a pilot and Wellington Captain in 1942.  Douglas was posted to the Middle East on ferry pilot duties and then to 38 Squadron, RAF Shallufa, Egypt, on Torpedo training and anti-submarine/shipping patrols.  Later in 1942 he flew Wellingtons with 38, 69 & 458 (RAAF) squadrons from Malta, Shallufa, Blida & Protville (Tunisia).  These were mainly anti-shipping operations and the bombing of Italian airfields and harbours.  On 1st August 1942 he took off from Protville for an anti-shipping patrol off the south coast of Sardinia.  At 0430hrs the crew spotted a stationary enemy destroyer just off the coast, 50km north of Cagliari.  Douglas decided to attack but aborted his first run and made a second approach from the coastline at a height of just 20' above the sea.  Unfortunately the aircraft struck the water, possibly catching a wing-tip or the bomb bay doors, and crashed killing the rear gunner, Sgt. Herb Kontzie (RCAF).  The rest of the crew were picked up from their survival dinghy and all became prisoners of war.  Douglas was held at various Italian camps before ending up in Stalag Luft III.  Liberated in May 1945 he worked with MI9, based in Holland before refresher flight training and a brief spell as a captain on Dakotas.  Douglas was demobbed in September 1947 and died in 2020.  He is mentioned in 'The Mediterranean Air War 1940-43 Vol 3. Tunisia & The End of The African Campaign Nov.'42 -43' by Christopher Shores.  Comes with some basic research and photocopy photographs showing him with his distinctive handlebar moustache.  Purchased directly from his son.