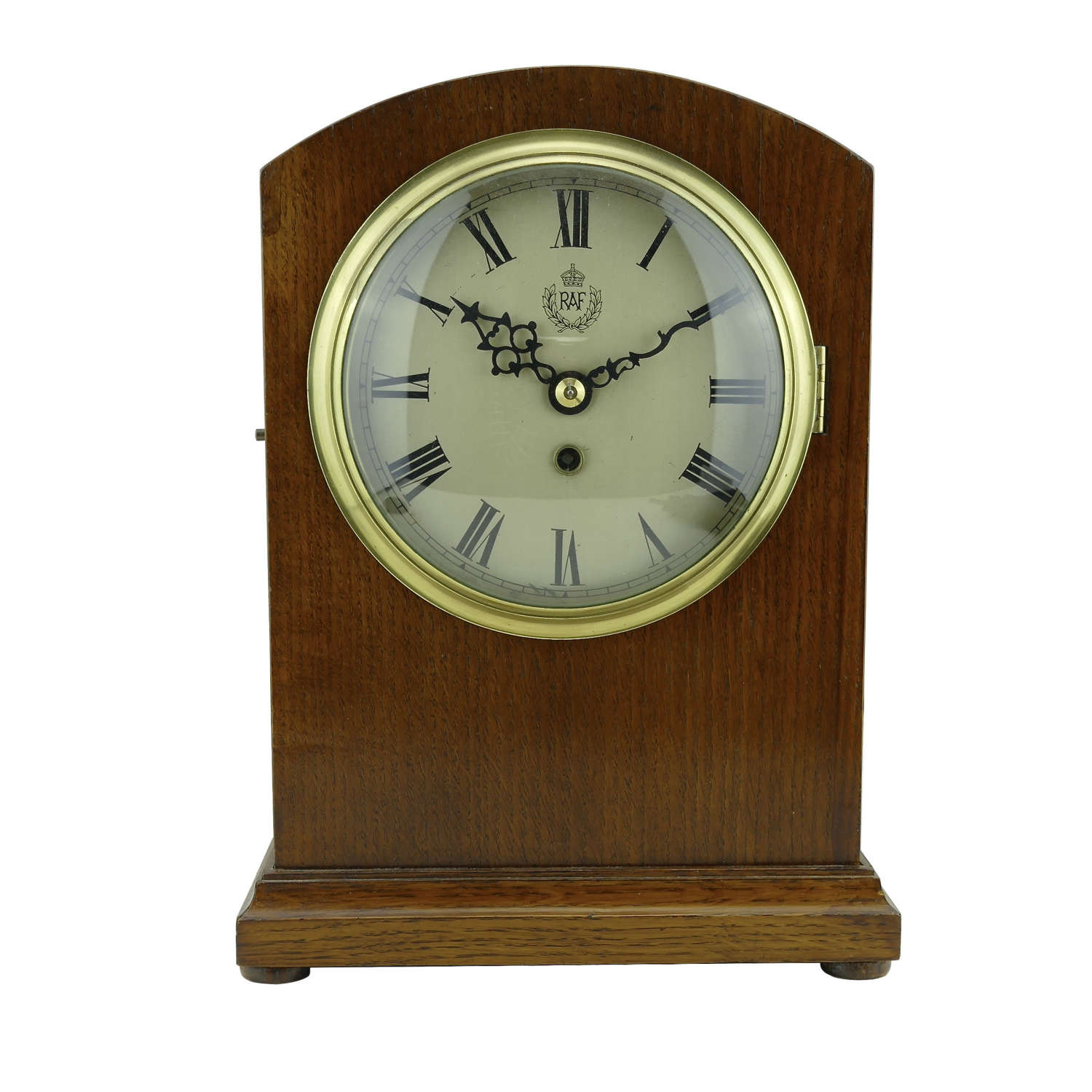 Approximately 40 x 29.5 x 15.5cm.  One of the most unusual wartime RAF clocks.  These were introduced during 1941 in response to an Air Ministry request for large Mantel clocks.  Due to the shortage of raw materials these domed top clocks were manufactured by F.W. Elliott using spare parts from other clocks made for the Air Ministry.  Close inspection of the case reveals it to be the inverted backbox of a RAF fusee movement dial clock.  The original peg holes have been filled and because the AMO specified an oak case, the solid mahogany has been veneered in oak, thus hiding the lower access door (now at the top)! This example retains the side access door and has a bespoke rear door.  Decorative oak mouldings around the base and turned bun feet complete the transformation.  Fitted with a high quality 1939 dated F. W. Elliott  single fusee 8-day movement as found in the standard large 'flat topped' mantel clocks.  20cm/8" convex dial with engraved Roman numerals and King's crown RAF crest infilled with black wax.  Spun brass bezel with convex glass and push button release. Also noteworthy are the elaborate filigree hands normally associated with very early mantel clocks of the 1920s.  The case is in very good overall condition bar a few minor blemishes and small cracks in the oak veneer (see photographs). The Elliott movement is signed, 1939 dated and numbered.  It has clearly been fully serviced, stripped, cleaned and polished, being exceptionally clean, retaining the original fusee chain (not replaced by a modern phosphor-bronze wire)and original pendulum (rod possible replaced).  The dial shows light wear and marks, most notable towards the 'VI' but the RAF crest is excellent as are the hands.  Good working order.  A large imposing clocks that really makes a statement in a room.  Due to the size, weight and delicate nature of clocks collection is advisable.  That said we can ship worldwide and will pack with great care.   This came from the estate of Frederick Charles Blackmore MBE.  He joined the ATC at the outbreak of war before his call up in 1942.  After training as a Flight Engineer at St. Athan he was posted to a Heavy Conversion Unit at RAF Riccal near Selby in Yorkshire.  From there he flew with 578 Squadron bomber command on Halifaxes.  He died in 2017 at the age of 94.  A beautiful example of this rare clock.  Stock code C23646. 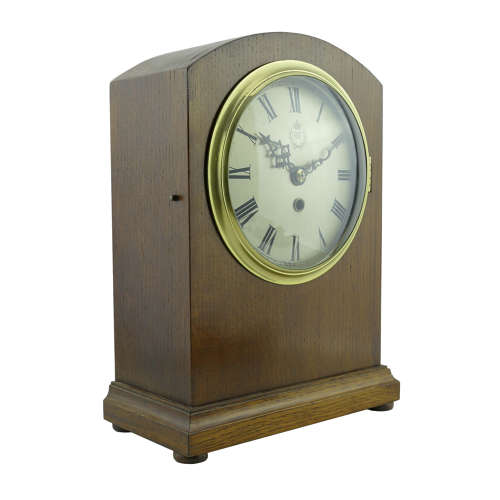 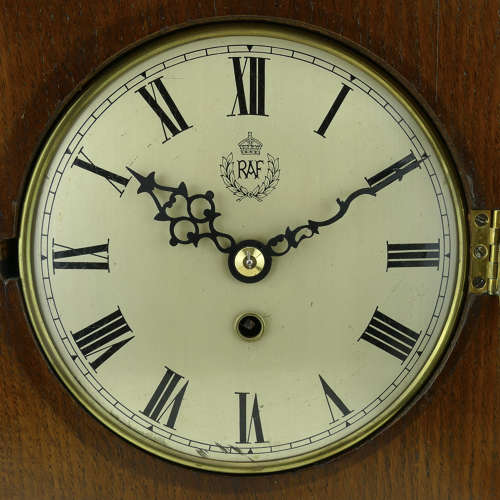 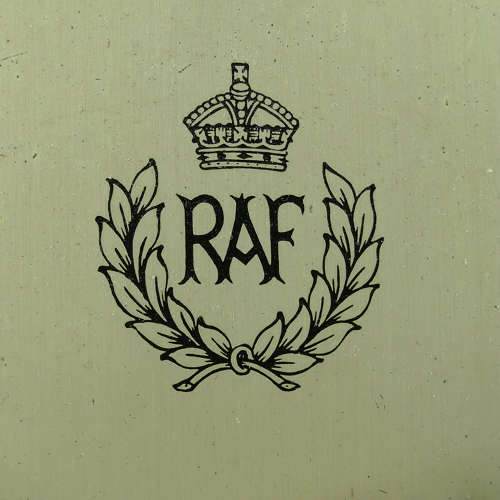 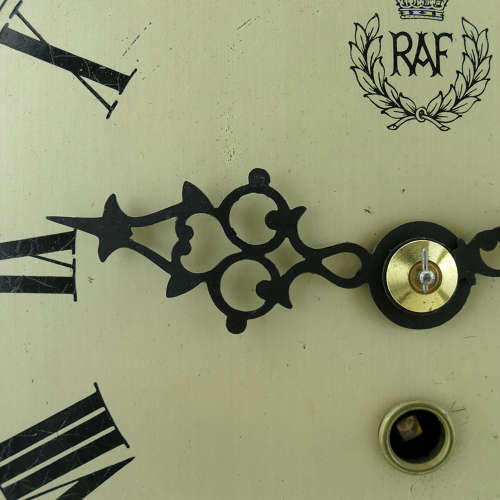 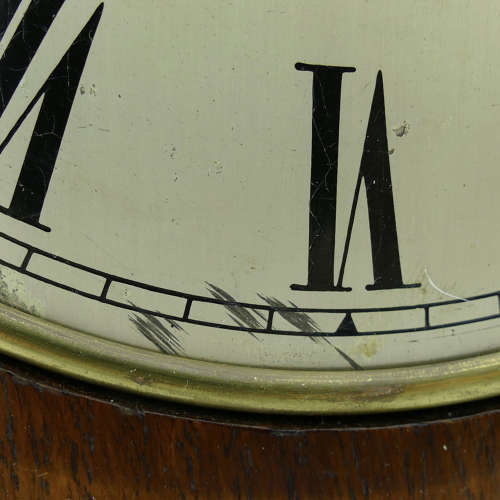 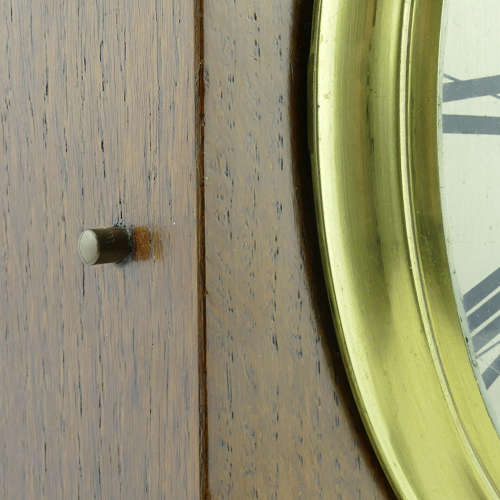 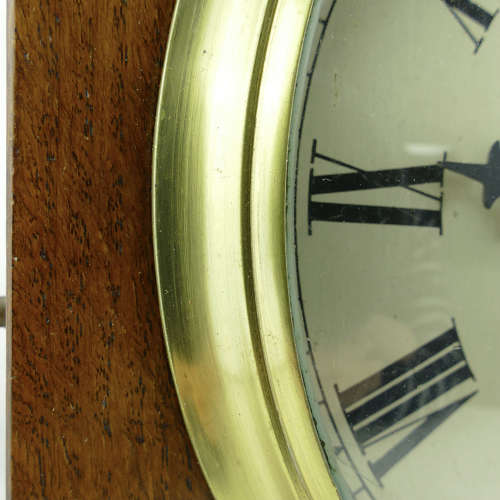 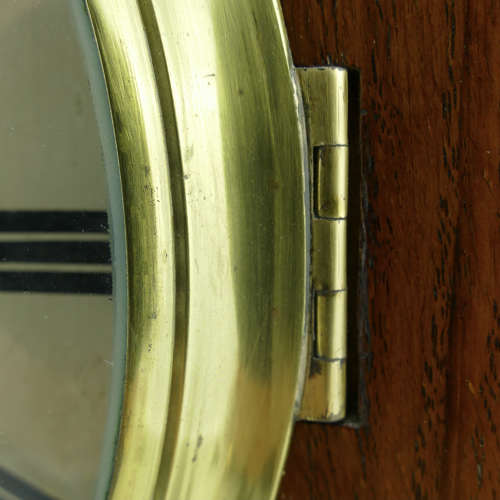 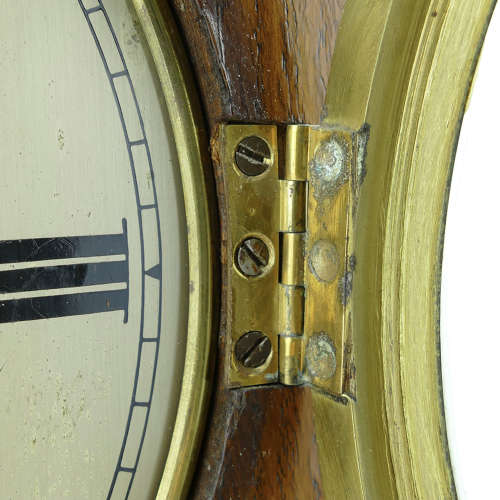 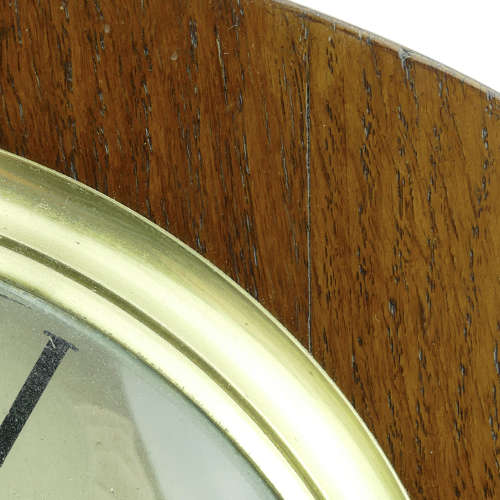 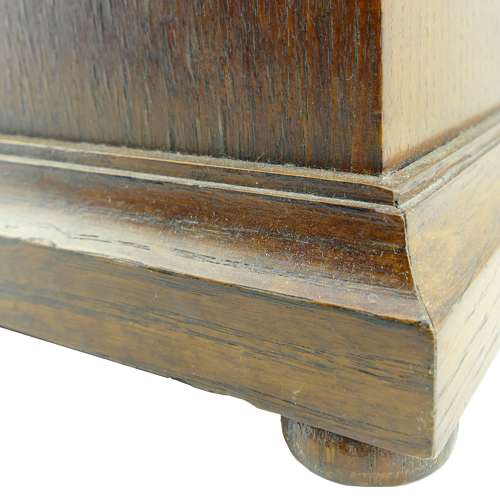 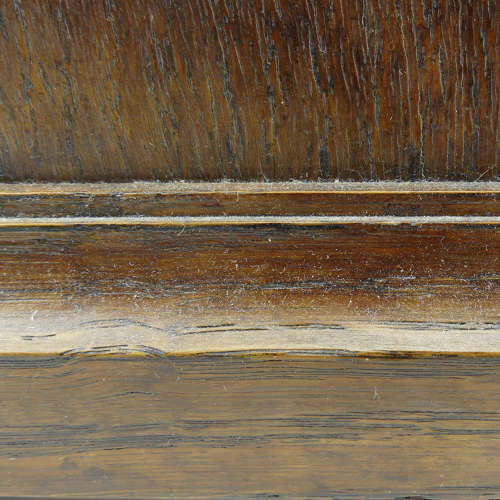 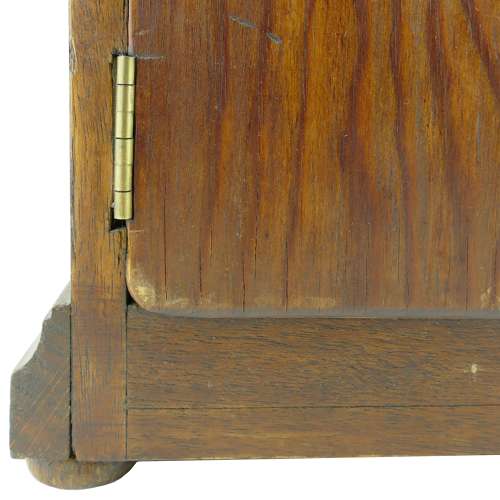 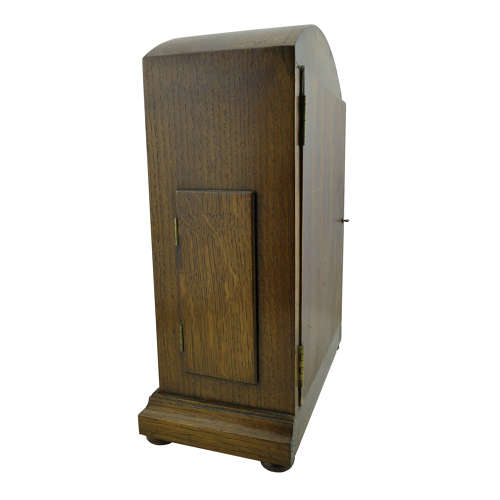 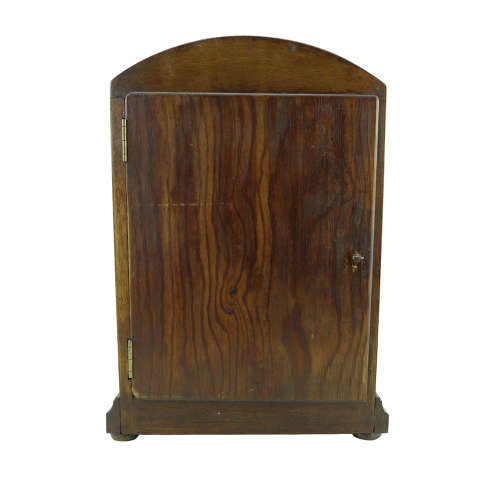 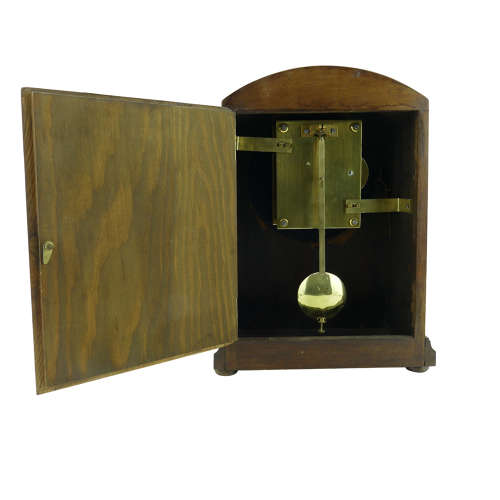 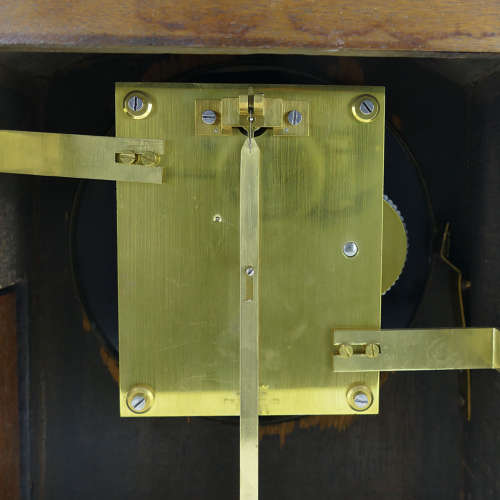 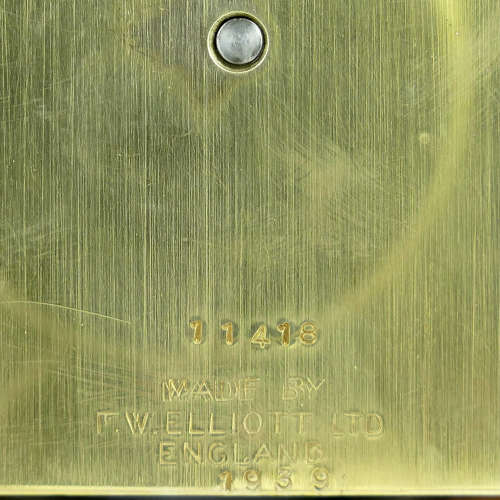 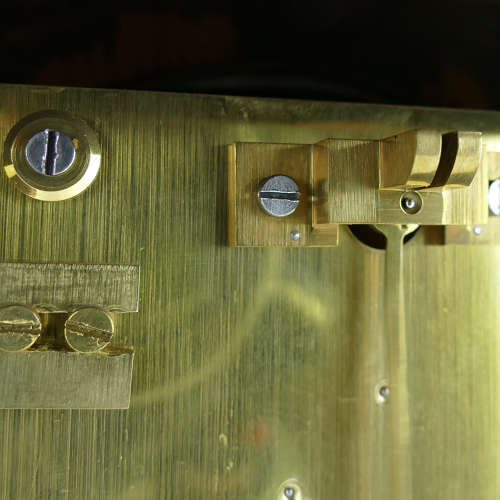 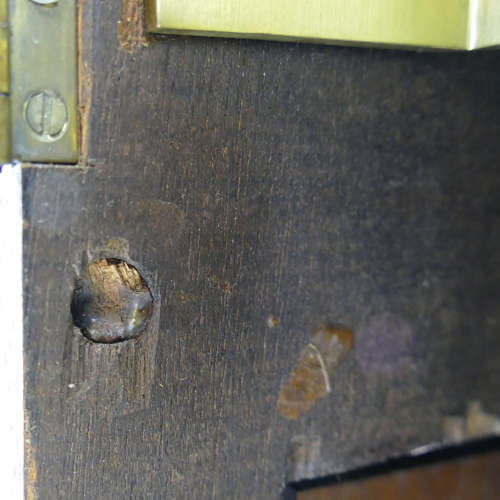 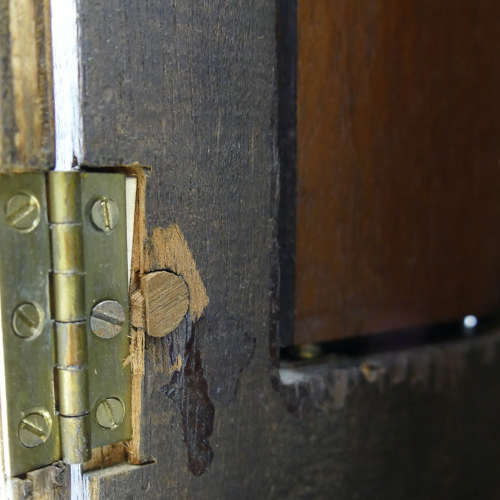