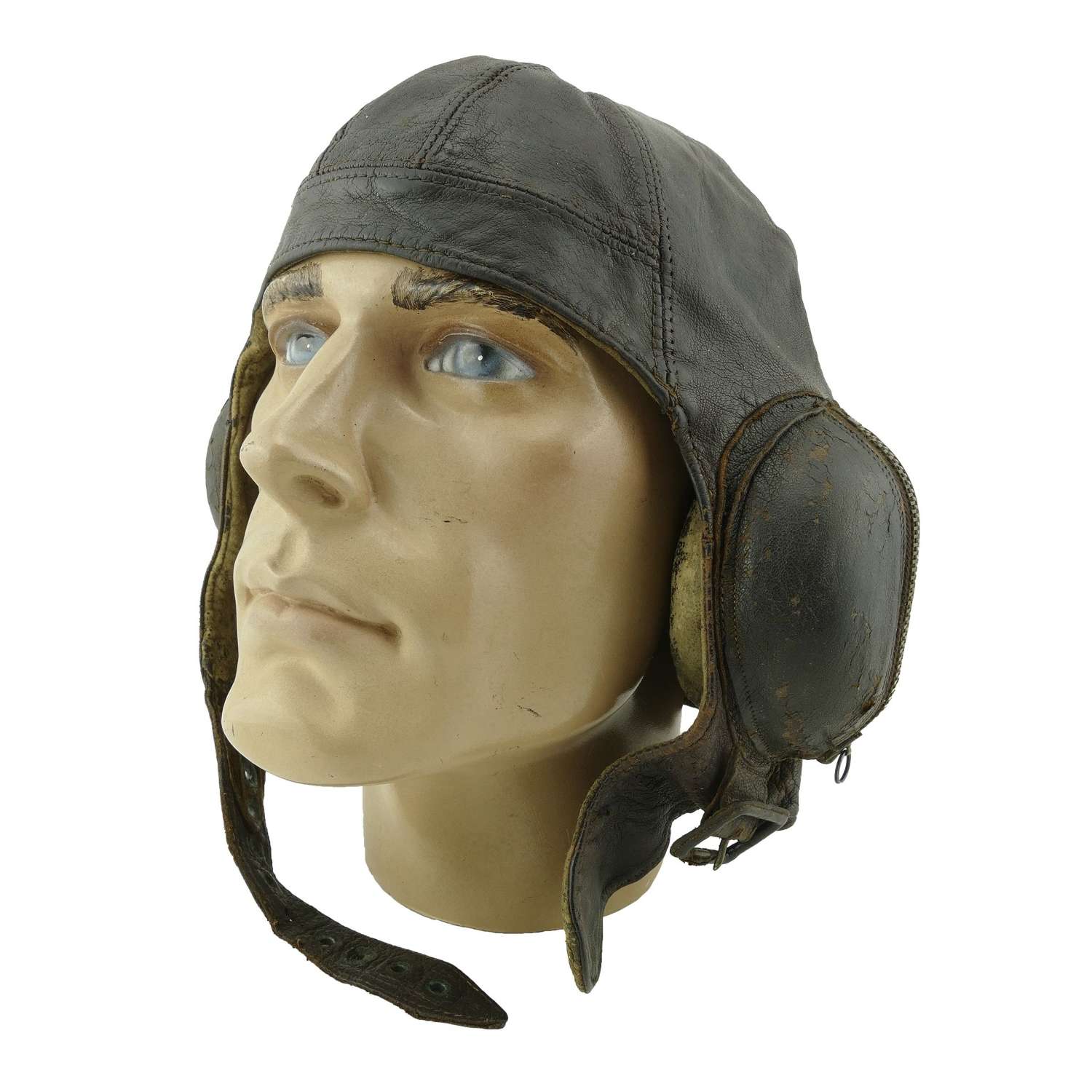 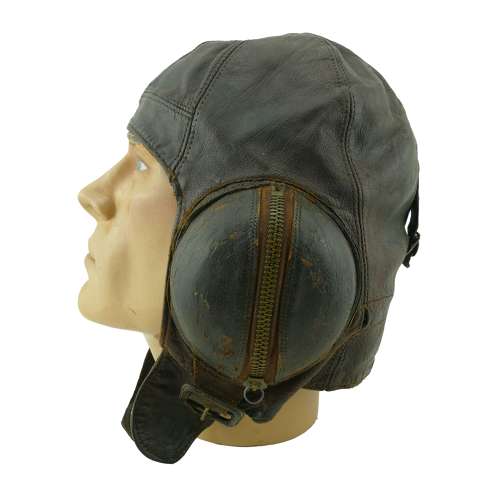 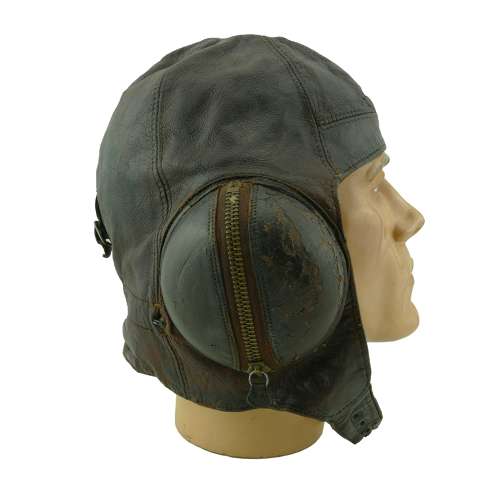 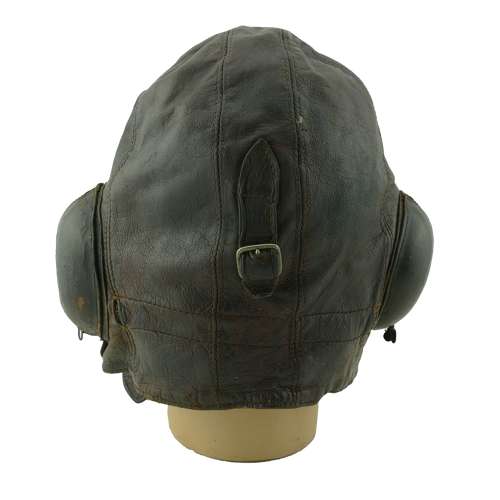 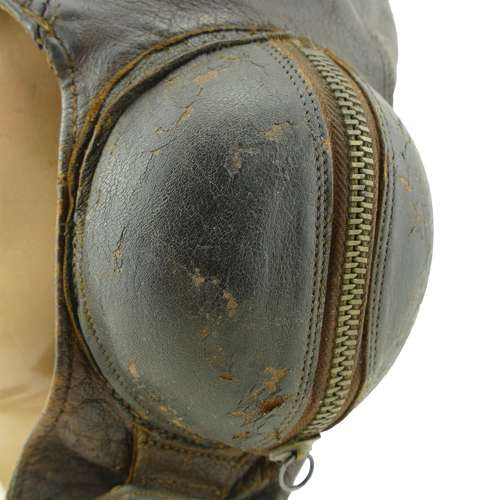 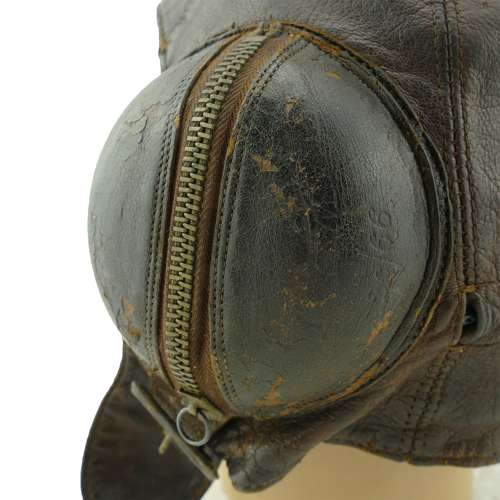 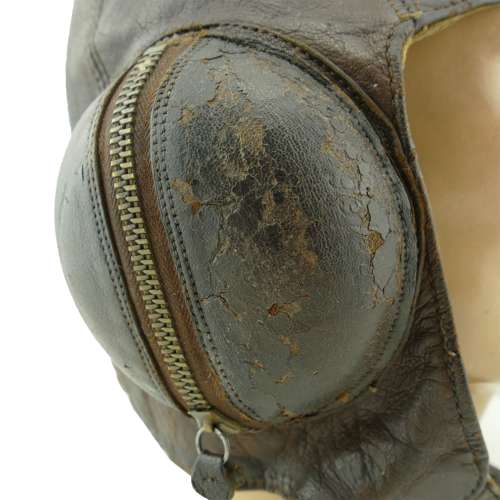 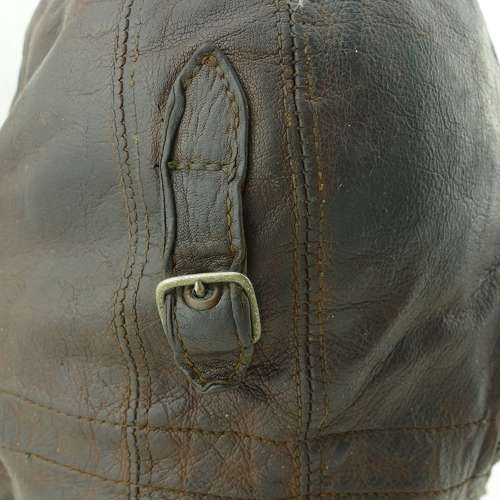 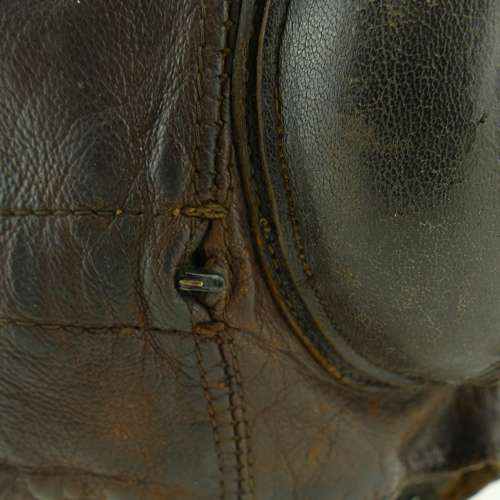 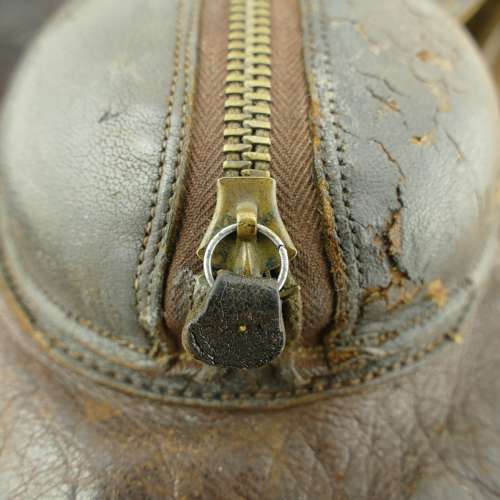 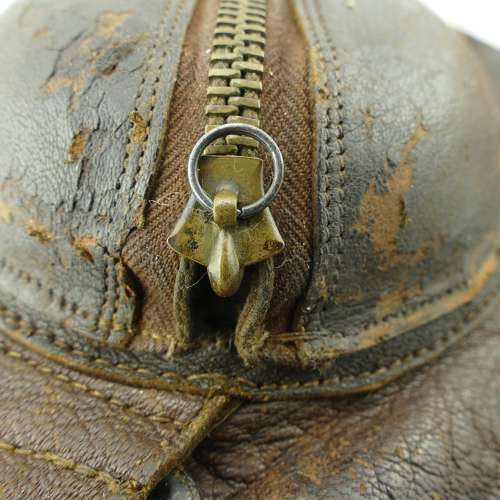 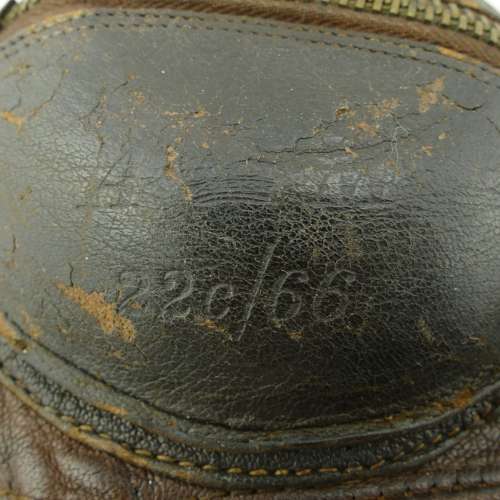 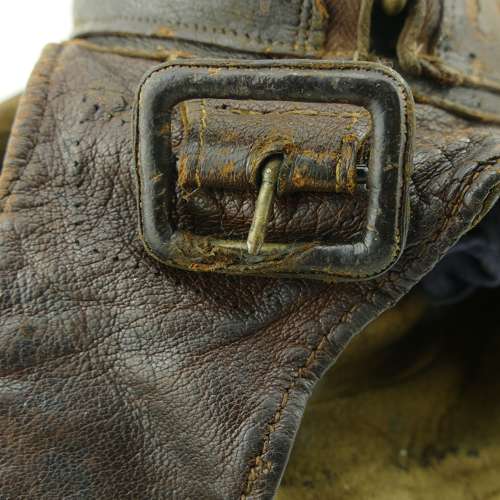 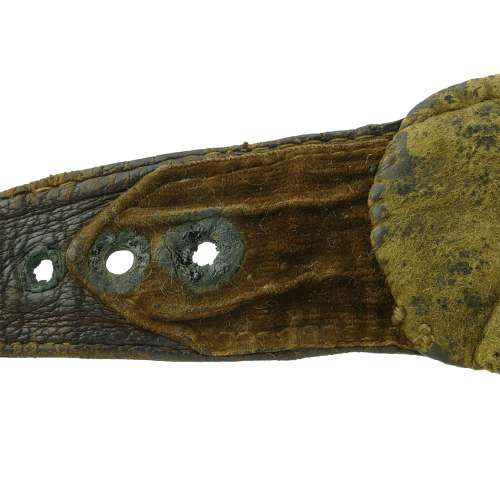 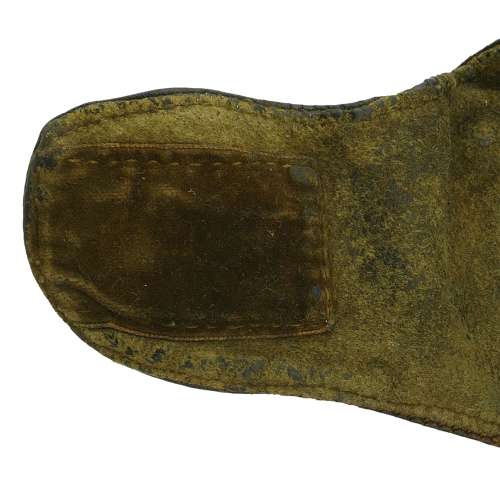 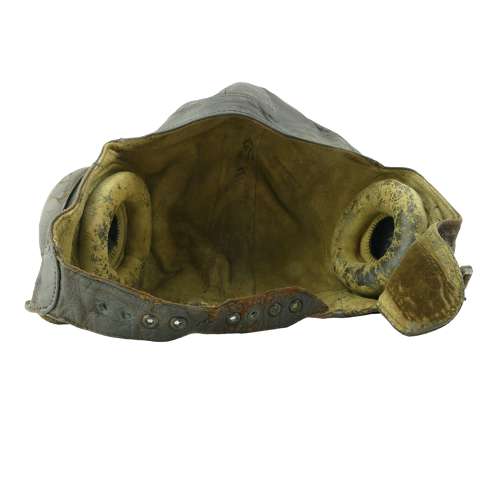 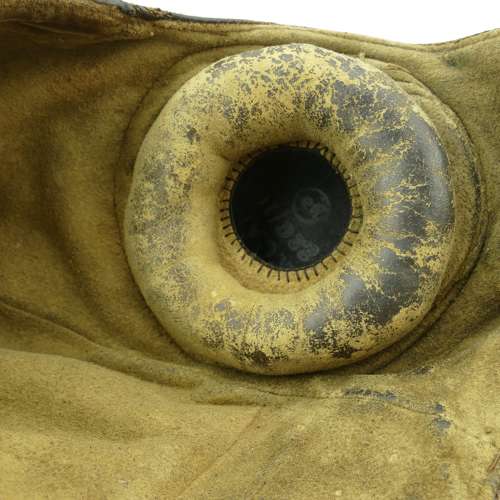 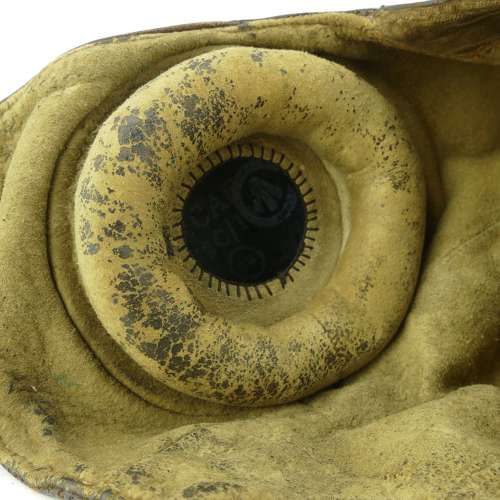 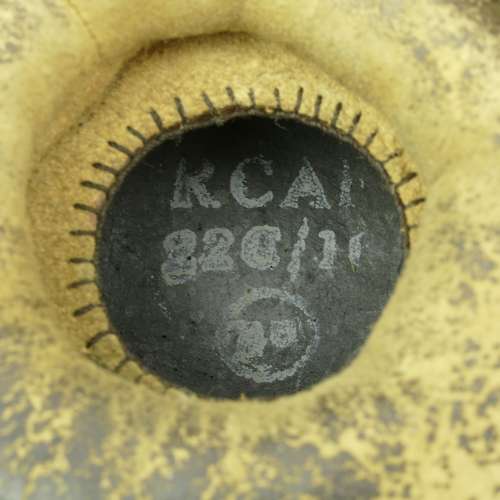 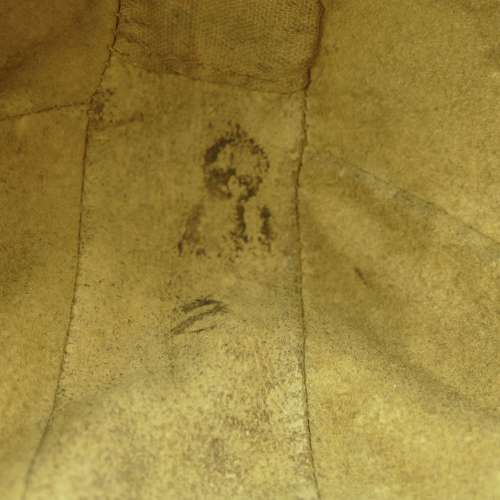 Stores reference 22c/51.  Dark brown leather helmet with a chamois lining.  Wide leather chin strap with a simple single pronged buckle fastening.  Single rear goggle strap.  This example has been fitted with 'B-type' flying helmet earpieces (and corresponding 'donut' earpieces), stores reference 22c/66, rather than the usual chamois lined earflaps.  The leather is generally in good supple condition retaining much of the original chromed finish.  The earpieces are sound with but have areas of scuffing and surface peel in places as shown in the photographs.  Both zips function but are a bit stiff and would benefit from careful lubrication.  One slider retains an original leather puller tag.  The chinstrap is worn from use, a couple of the eyelets are missing and the remaining ones have verdigris deposits.  The leather covered buckle also shows wear but is quite good.  There is a faded/washed out label in the crown of the lining and a faint Air Ministry King's crown mark plus the number '2'.  Also fitted with what appears to be a good pair of RCAF cushions, no doubt added by the previous owner to fill out the earpieces.  The 1930 pattern helmet replaced the Mk.1 used by the Royal Flying Corps during the Great War and is also the forerunner of the type B introduced in 1935.  This example would appear to be a hybrid of both helmets, likely dating from 1935 or 1936.  A good '+' used example of this extremely rare variant of an early RAF helmet.  Stock code H25169.