During September 1940 the Luftwaffe turned its attention to the bombing of London and the 15th September has always seen as the turning point of the Battle. However, the hardest fought day  took place 75 years ago today, Sunday 18th August 1940.   With invasion barges and troops being assembled on the French coast, the Luftwaffe concentrated attacks on the fighter stations of 11 Group and tried desperately to destroy the British frontline fighter stations and cripple the RAF on the ground.  Three large raids were undertaken with Do17, Ju88 and He111 bombers escorted by Me109s, Me110 and Ju87s. Over 800 Lw sorties were met with more than 900 from Fighter Command.  Kenley was badly hit with three of its four hangars destroyed, Biggin Hill, Croydon and Manston were also hit. Along the coastline a raid aimed at Thorney Island, Gosport and Ford airfields and Poling radar station was met with strong opposition from the RAF.  A late afternoon attack against Hornchurch and North Weald failed to reach the targets due to a deterioration in the weather but combat en route was intense. Whilst aircraft losses were high at the end of the day British and German figures were relatively comparable at 68 : 69.

Amongst the many aircraft losses and injuries British fatalities included :

Flying Officer Franciszek Gruszka (76785), a Polish pilot with 65 Squadron (Hornchurch) was killed in Spitfire R6713 during a patrol at Westbere near Canterbury. He was 30 years old.

Flying Officer Richard Hugh Anthony 'Dicky' Lee DFC (33208) of 85 Sqdrn. (Hornchurch) destroyed a He111 in November 1939.  On May 10th 1940 he shared a Ju86 kill and damaged a Ju88. On 11th he shot down two enemy aircraft and was then shot down by flak and taken prisoner.  He escaped and returned to his Sqdrn.  On May 27th he was shot down into the sea but rescued shortly afterwards and awarded the DSO.  Sadly he was was lost on 18th in Hurricane P2923 following  pursuit of an enemy formation off the East coast and is remembered on the Runnymede memorial.
(see photo - Lee is on the left)

Pilot Officer John Basil Ramsay (41204) of 151 Sqdrn. was lost in Hurricane R4181 following combat over Chelmsford. He was just 21 at the time. The crashsite was excavated in the 1980s and his body found within the airframe.  PO Ramsay was buried with full military honours in October 1983.

Pilot Officer John Wellburn Bland (90895) shared the destruction of a Do215 in July 1940 and claimed a Ju87 later the same month.  Bland was shot down and killed in Hurricane P3208 following combat.

Flight Lt.  George Edward Bowes Stoney (28119) claimed two Ju87s  before he was shot down and killed in Hurricane P2549 during combat with Bf109s over the Thames Estuary. He was 29.

Sergeant Peter Kenneth Walley (819018) joined the AuxAF in 1938 as an airgunner but transferred to 615 Sqdrn. and had been selected for pilot training by the time war was announced.  He shared the destruction of a BF109 on August 16th but was killed when his Hurricane P2768 was shot down in flames by BF109s of JG3, crashing near Morden Park golf course. He was just 20 years old. 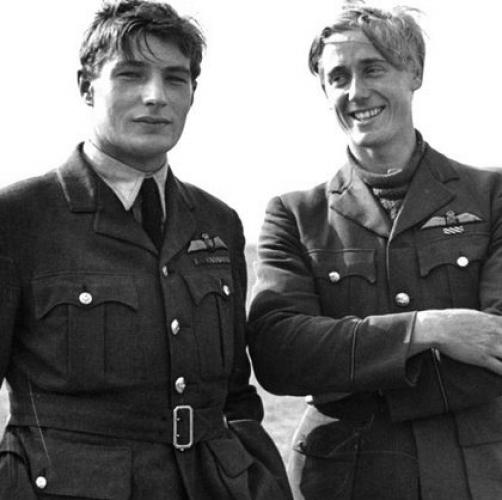