The Most Important Day In British History?

Even towards the height of the battle at end of August 1940 the outcome hung in the balance.  Only when the Luftwaffe inadvertently dropped bombs on London did the tide turn.  The RAF were ordered to bomb Berlin in retaliation and a furious Goering persuaded the Fuhrer to switch targets away from airfields and Radar positions to the Capital.  This critical tactical error gave the RAF valuable time in which to recover. Airfields and radar sites were repaired and defences became fully operational again. In addition the main German fighter, the Me 109, carried enough fuel for just 10 minutes flight over London, seriously compromising  its effectiveness as a bomber escort.  Finally, the German raids now came within the range of 12 Group led by AVM Trafford Leigh Mallory, and their large formation tactics known as the "Big Wing" or ‘Duxford Wing‘.  Knowing the target to be London and the industrial centres, the British controllers now had time to assemble a large number of fighters from both 11 & 12 Groups to attack the German formations and break them up before they could release their bombs. The presence of large numbers of British fighters was surprising to the Luftwaffe pilots, who had been told by their intelligence officers that Fighter Command had been crippled by the earlier raids against the airfields. In changing tactics and targets, the Germans had actually helped Fighter Command to deal with the raids.
For the people living in the cities, the Blitz had begun, as night raids followed daytime raids and gave the civilians little rest.  Now everybody was in the front line.
The 15th September saw the Luftwaffe launching massive attacks with a series of raids on the Capital.  On this occasion the resistance to the Luftwaffe was intense leaving their bombers over the edge of  city depleted of their fighter escorts and in combat with a 5 squadron strong ‘Big Wing‘.  Within hours a second wave of bombers headed for London to the same result.  For the first time some Luftwaffe units had been outnumbered.  Official losses for the Luftwaffe on what has become known as ‘Battle Of Britain’ day were 56, with a further 12 force landing in France.  RAF losses totalled 27, with 7 forced landings.  17 pilots were out the Battle, 12 killed in action.

Today, 75 years on, the Battle of Britain will be commemorated with a huge gathering of Spitfires and Hurricane fighters.  Around 40 aircraft will take off from the historic Goodwood Motor Circuit and disperse in small groups around the South of England in the skies where the Battle was contested. Battle of Britain pilot Wing Commander Tom Neil, now 95, will lead the formation from the rear seat of a two-seat Spitfire.

Text taken from 'Their Finest Hour - A Collector's Guide to the Battle of Britain' by David Farnsworth, issued as a free 15 page supplement with The Armourer magazine marking the 70th Anninversary of the Battle in 2010. 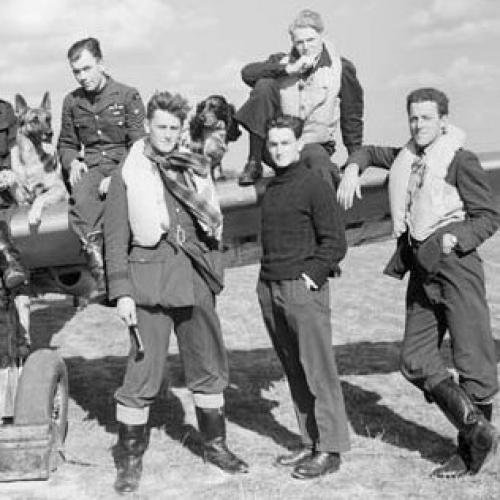