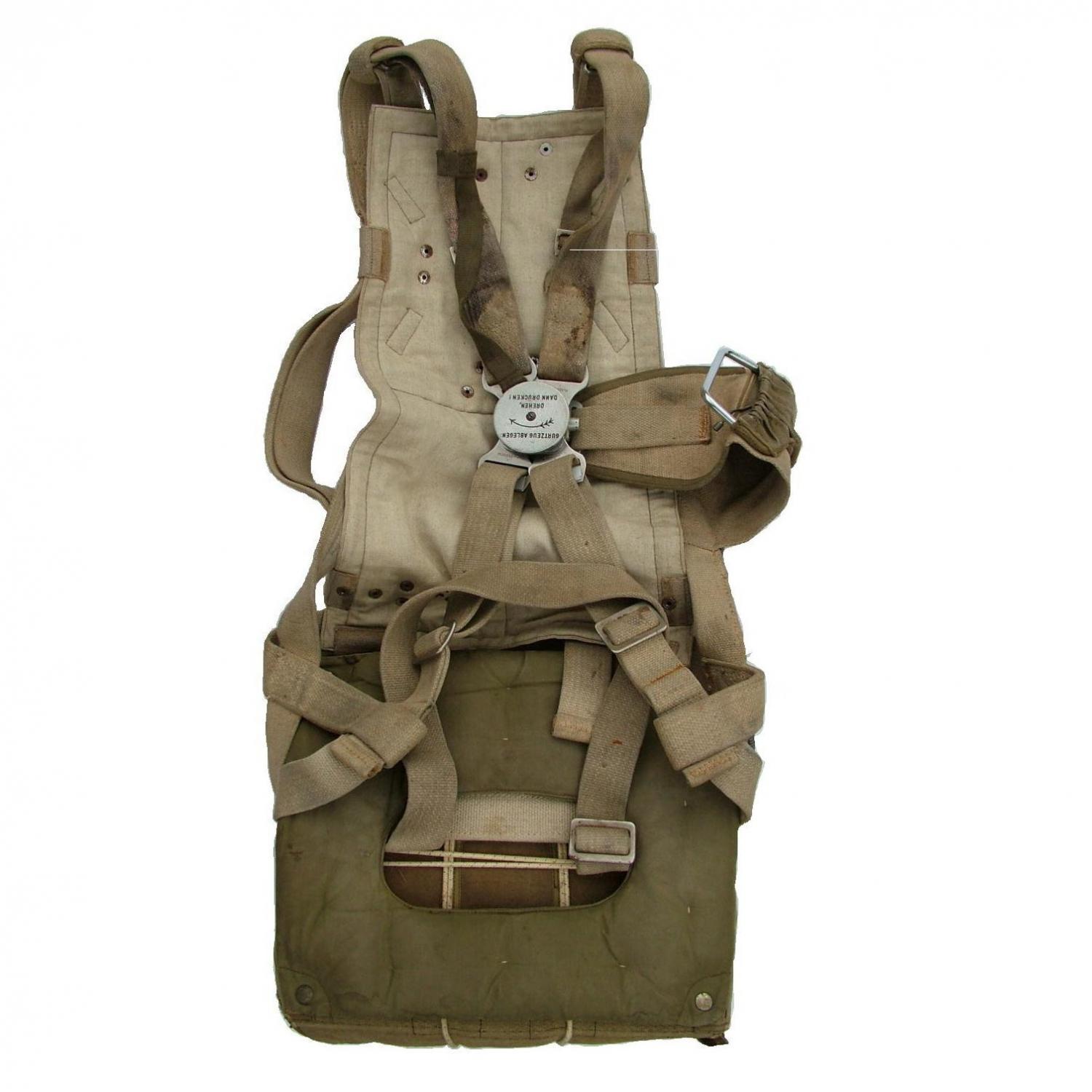 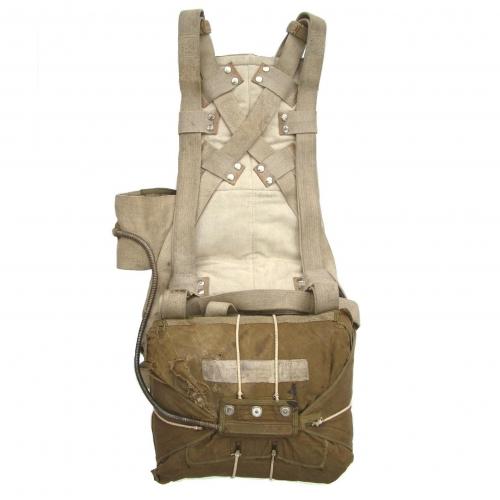 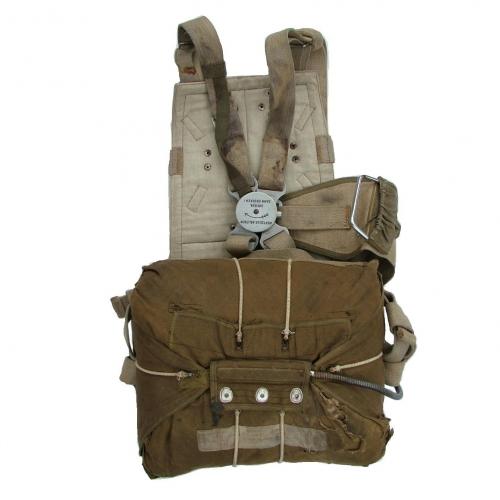 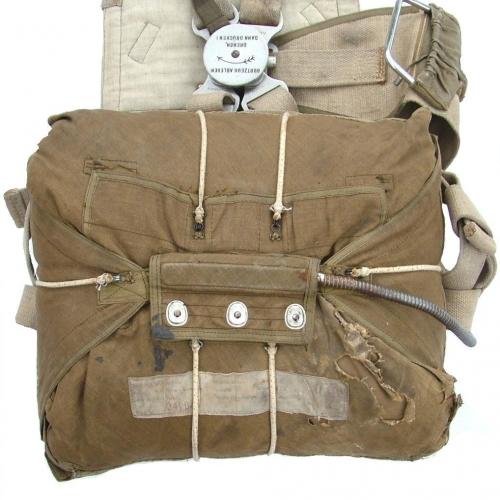 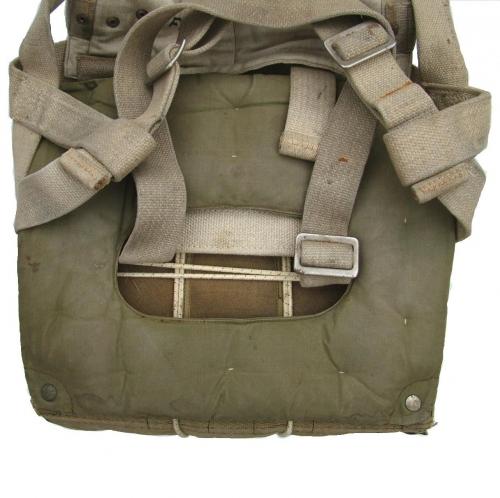 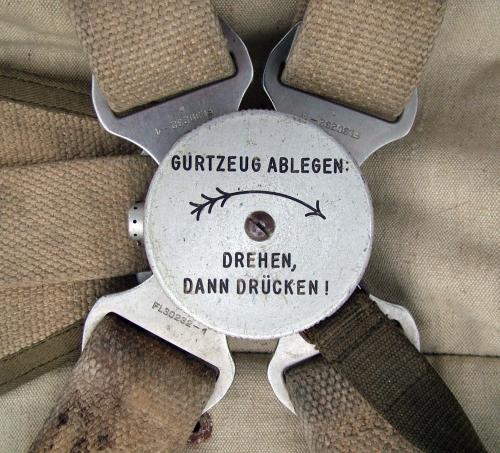 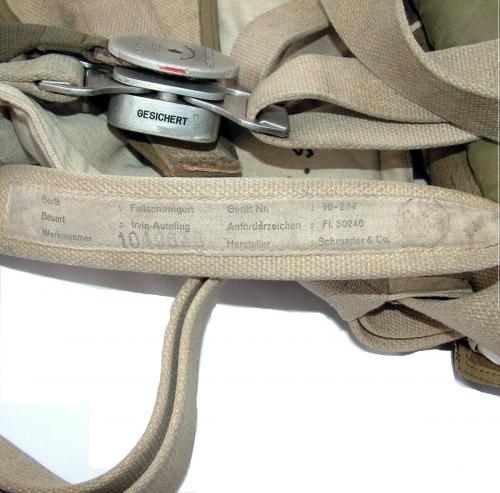 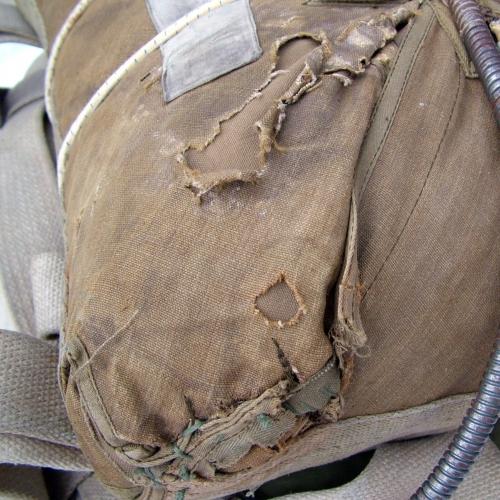 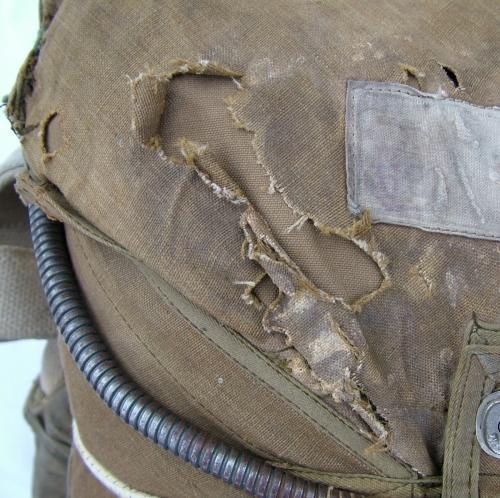 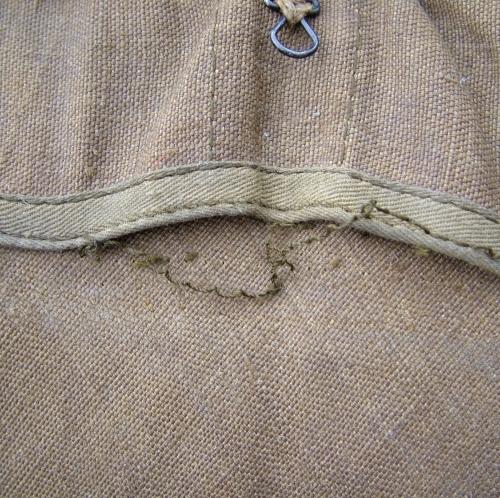 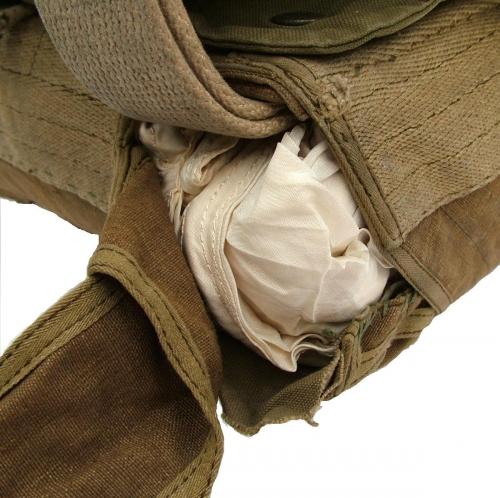 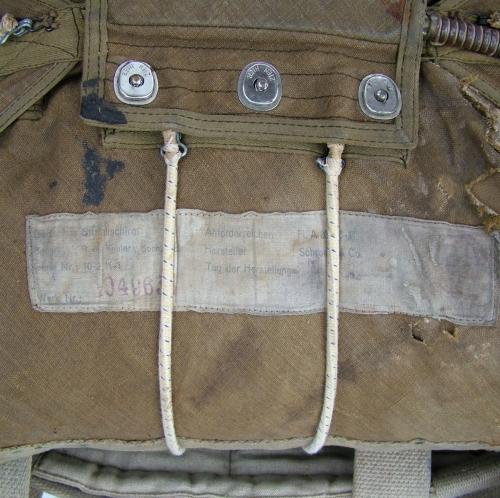 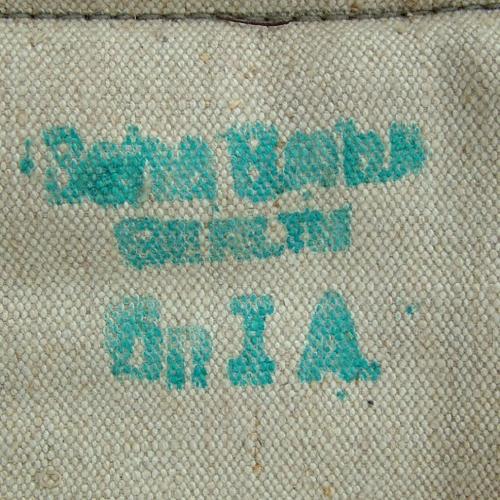 By Schroeder & Co. Luftwaffe Sitzfallschirm, Model 30 IS 24 (Fl. 30231).  From 1937 the British firm Irvin were contracted to supply Germany with parachutes. The Germans then continued to copy and produce their own version of the seat parachute after war broke out - hence the almost identical appearance to those used by the RAF.  This parachute was worn by fighter pilots in Me109s and Ju87s but also by other crew in aircraft with the bucket recess in the seat.  It features the copied RAF quick release (QR) box although the Germans added a safety 'key' to prevent accidental depression and potential premature release.  The webbing harness is labelled 'Fallschirmgurt' (Parachute Harness), 'Gerat Nr. 10 .2. 14, Bauart (Type) Irvin Autoflug'   It also has the reference number and maker's details plus a relatively faint date of 2 Juli 1943.  It has the correct QR box with engraved German text reading 'To Release harness : Turn and push'.  Text on the side of the box reads 'Gesichert' (Safe) and 'Ensichert' (unlocked). The safety 'key' is attached via a narrow webbing lanyard secured to the harness and a wide canvas webbing waistbeltÂ carries both the QR box and ripcord housing. The olive green reed linen pack is complete with label 'Sitzfallschirm, Gerat Nr. 10 . 2.K -1, Anforderz Fl A.30246-1, Werk Nr.'

The harness is a bit grubby with some rust marks but has no damage other than a little surface corrosion on metal parts.  The QR box is fully functioning and the rip cord housing, rip cord and handle are all present.  The pack is generally sound but unfortunately has damage to the edge of one 'flap' reputedly caused by battery acid from a tank where it had been stored.  The flap has had very similar material tacked to the back to improve strength and appearance but the repair could easily be improved.  It is comes with a set of bungees.

The pack contains what appears to be the original canopy complete with rigging lines.  We have not unpacked the canopy but it seems to be in good/complete condition.  The assembly is completed with the correct canvas backpad, marked ????  and seat cushion, both in very good condition. The harness and pack have the same serial number indicating these have always been together and have not been 'put together'.

It is extremely difficult to find Luftwaffe parachute kit and this is complete and in very good used condition.  One very similar (same Fl. codes etc. minus canopy) sold at auction in Germany a few years ago for considerably more money than this one.  Buy it while you can.  A superb display piece. Many more photographs are available on request and we recommend you viewing these before committing to buy. Stock code M20872.