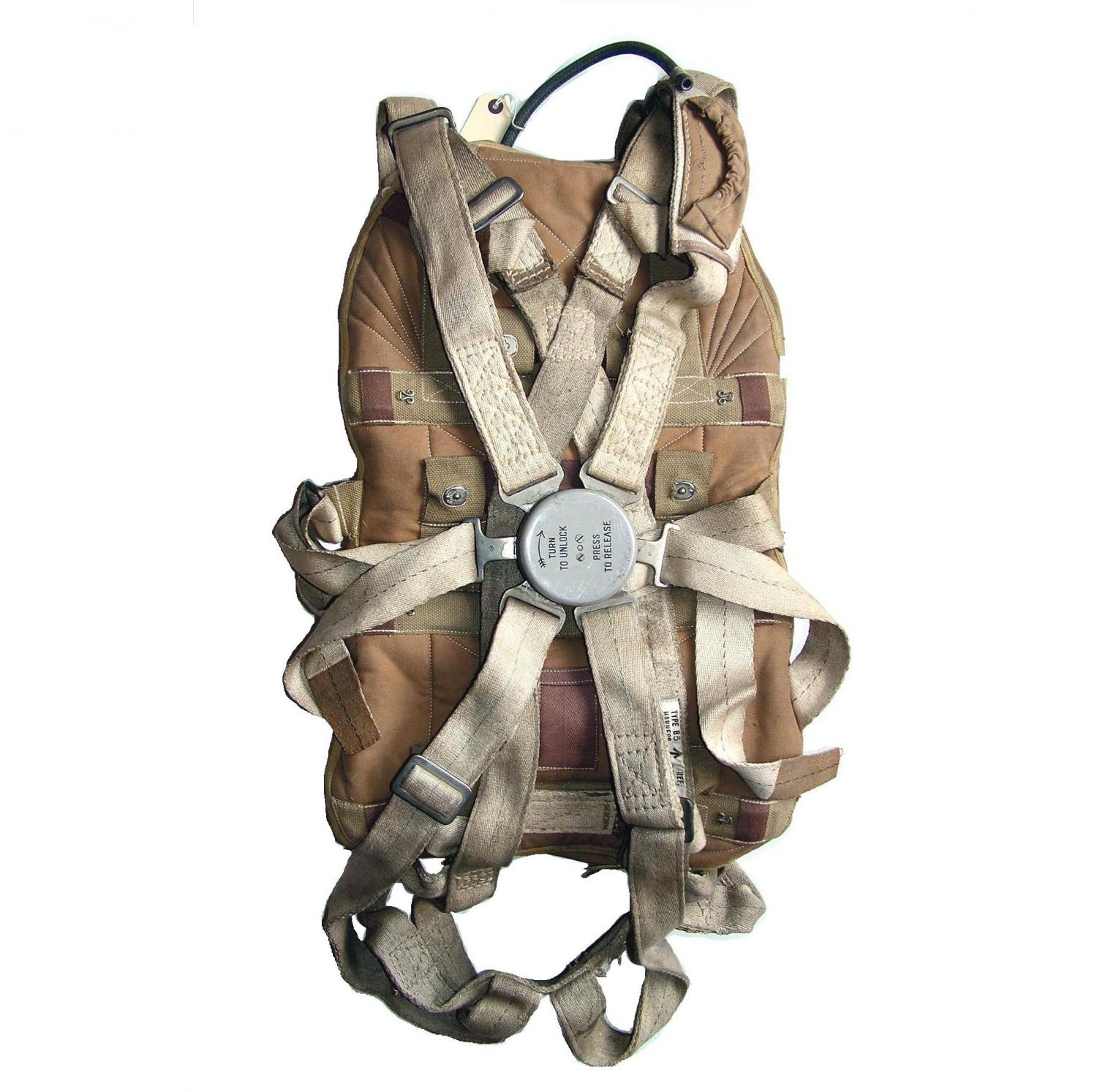 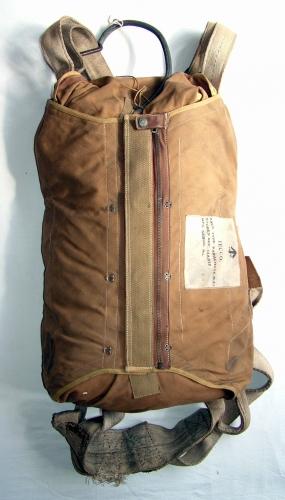 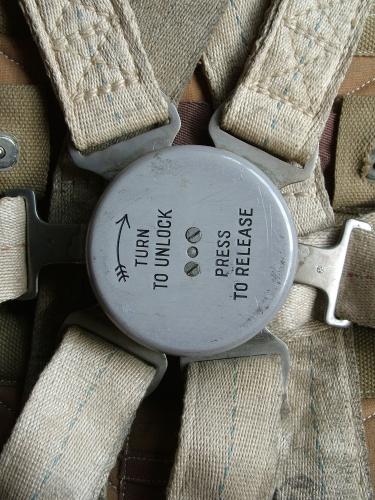 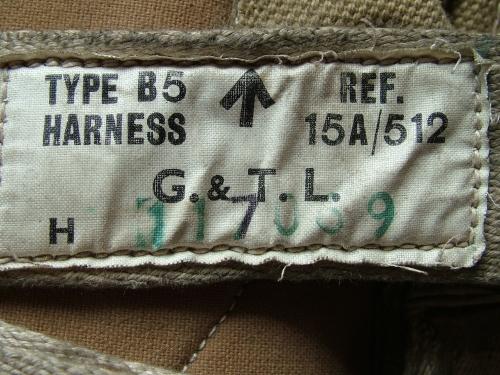 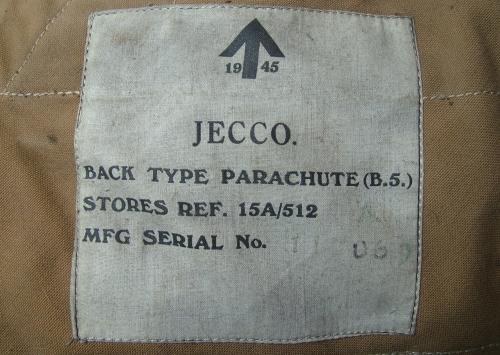 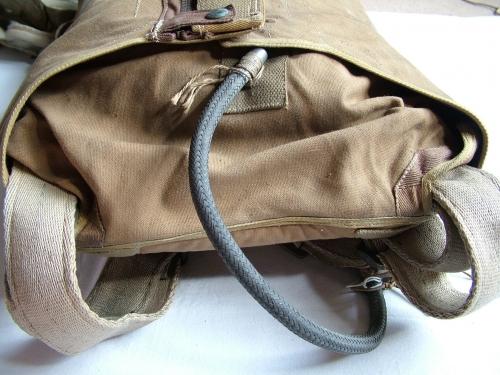 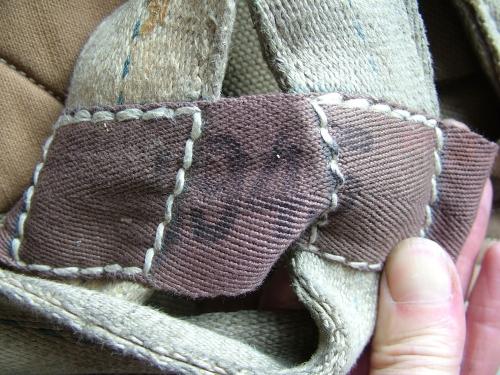 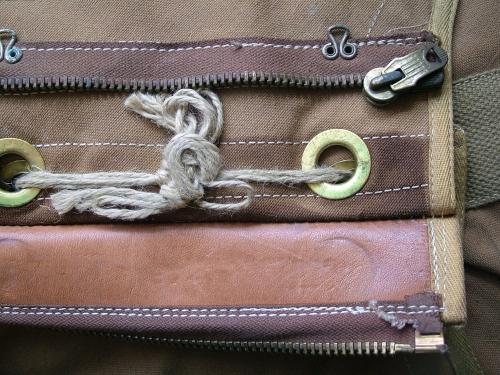 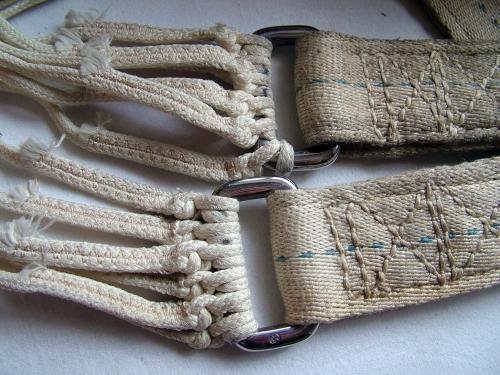 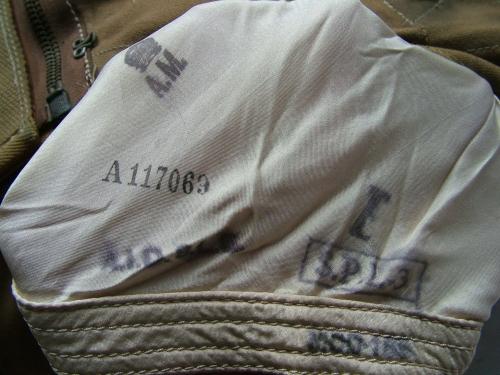 RAF Type B-5 Back Parachute Assembly

Type B5. Stores Ref. 15A/512. 'Parachute, Single-point, Quick-release, Back type pack'. Intended for use by all aircrew in Lancaster and Halifax heavy bombers. It consists of a harness of medium webbing similar to the 'Observer' or 'Seat' types. The pack is attached to the harness and is carried on the back, acting as a cushion when the wearer is seated. The main difference in construction between this and 'Observer' and ' Seat' types is the larger quick release box with six connectors instead of the usual four and a slightly different strap arrangement. The rip-cord passes over the left shoulder, and the handle and pocket are carried by a sleeve on the left hand chest strap. Being somewhat cumbersome these parachutes were less popular than than the 'Observer/Chest' types and were thus produced in relatively small numbers and are now extremely rare to find. A wartime period photograph is shown in Mick Prodger's excellent book on flying equipment of WW2 - presumably as a contemporary example could not be found.

The webbing is in very good order with only minor soiling and a few lightly frayed edges. It is labelled 'Type B5 Harness, Ref. 15A/512 G & T.L.' and has th war department broad arrow & serial number. The harness is 1945 dated across one of the back straps and it is interesting to note that all of the B5 harnesses we have seen have been 1945 dated. The pack is in the usual sand coloured cotton canvas, is clean and in very good used condition. The long, zipped flap that covers the rip cord is excellent as is the rip-cord channel tube. The pack was manufactured by JECCO & has a large fabric label with broad arrow and 'Back Type Parachute (B5), Ref. No. 15A/512'. There is also a serial number and clear printed 1945 date. The pack is complete with full canopy and rigging lines but lacks bungees, ripcord and handle. The canopy appears to be silk and has clear Air Ministry markings.  Significantly, and unusually, all the components of this assembly are clearly marked with matching serial numbers indicating that it is an original item and not put together using 'parts'. Overall this is a very good used example. Far rarer than the seat-type assembly but around half the price. Stock code M15383.