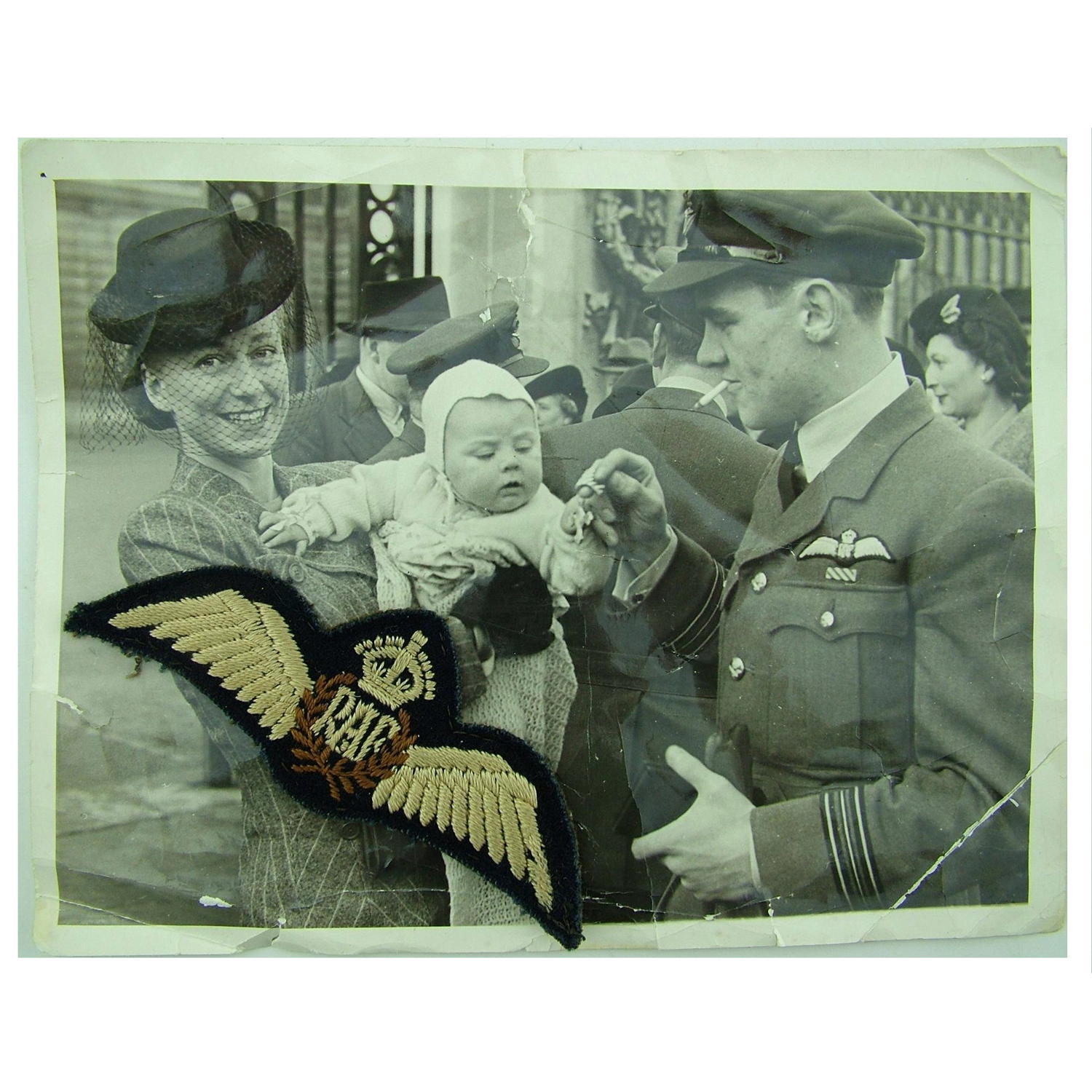 Press photograph and pilot wing of Squadron Leader John Herbert 'Jake' Kennard DFC.  The photograph taken for and used in the Daily Mirror is approximately 20 x 15cm and shows Kennard with his wife and baby on the day of his investiture for the Distinguished Flying Cross at Buckingham Palace, 9th December 1942.  Kennard, service number 40715,  was a pre-war RAF regular and a pilot with 103 Squadron at Elsham Wolds.  He  undertook 27 operational flights on Halifax and Lancaster bombers with another flight resulting in an early return.  Kennard was awarded an immediate DFC for an operation over Bremen on 14th September 1942.  The citation posted in the London Gazette for this reads as follows : 'Acting Flight Lieutenant John Herbert KENNARD (40715), Reserve of Air Force Officers, No. 103 Squadron.  One night in September, 1942, Flight Lieutenant Kennard was captain of an aircraft detailed to attack Bremen.  When about 15 miles from the target the bomber was attacked by an enemy fighter, the fire from which stunned the rear gunner and caused the bomber's aileron controls to jam.  Displaying commendable courage and flying skill, Flight Lieutenant Kennard eventually evaded his attacker and flew on to his target which he bombed and photographed.  While in the target area his aircraft was hit by fire from the ground defences which caused damage to the port fuel tanks.  A serious amount of petrol was lost but despite this and the difficulty of controlling the aircraft, due to the jammed aileron, Flight Lieutenant Kennard reached this country and made a safe landing.  His courage and determination to complete his allotted task were worthy of the highest praise.'

Prior to the end of their first tour the crew were selected for  instructor tranining but returned to Elsham for a second tour during September 1943.  Unfortunately this ended on just the fourth 'Op' when their aircraft was lost during a flight over Hannover on 27th September.  They took off in Lancaster III, code DV221 PM-K at 1934hrs and crashed at Mahlerten, 11km west of Hildeshiem.  The entire crew, Squadron Leader Kennard DFC, Pilot Officer T C Latham DFM, Sgt. J E G Aston DFM, Pilot officer R N Faulkner, Flying officer S A Morey DFC (RAAF), Pilot officer A Harrison DFM (RCAF) and Sgt. A Davidson were killed.
The photograph is in rather poor torn/creased condition and has taped repairs on the back.  It has been annotated by Kennard's family 'Squadron Leader J H Kennard being invested at Buckingham Palace with DFC Dec. 9th 1942 with his wife (daughter of Ethel, Reading nee Hall) & baby June, 6 mnths old.  Soon afterwards reported missing - did not return.'  Another hand has also written 'Joan' and 'Dad's niece' - relating to Kennard's wife, so this has come from a relative of Joan, Kennard's wife.  Also came with a very nice flat pilot wing made in silk coloured oatmeal thread on black felt.  This is in very good to excellent used condition and is assumed to be one of Kennard's.  An interesting and very poignant group.  Stock code P22059. 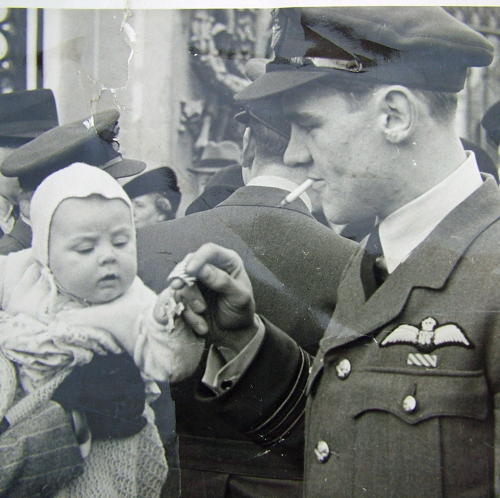 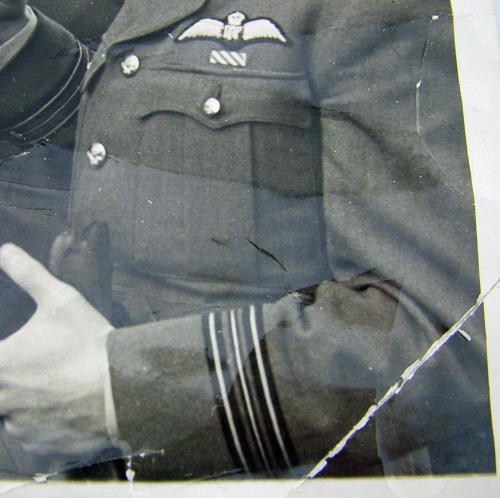 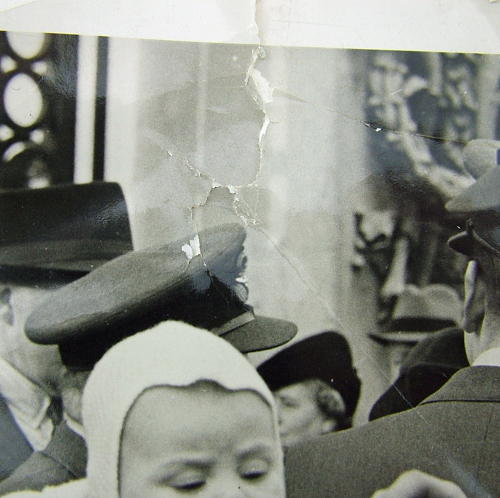 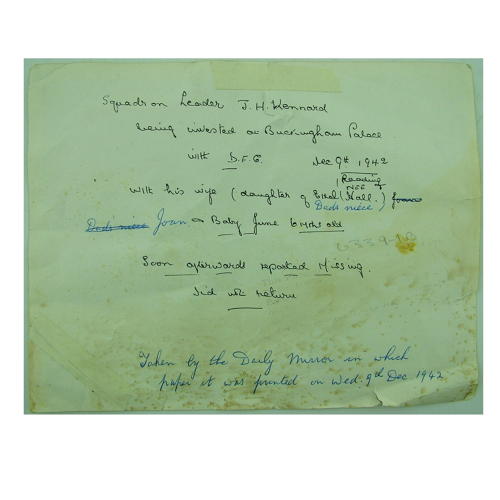 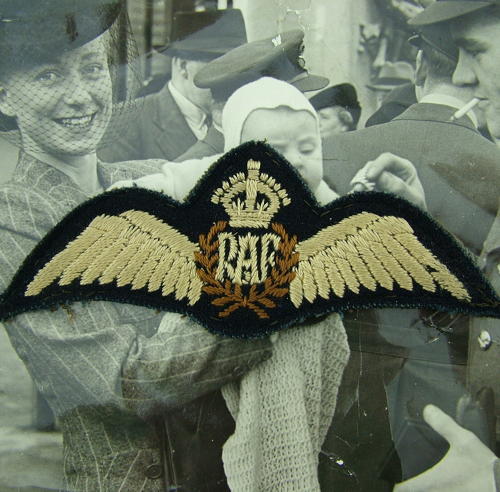 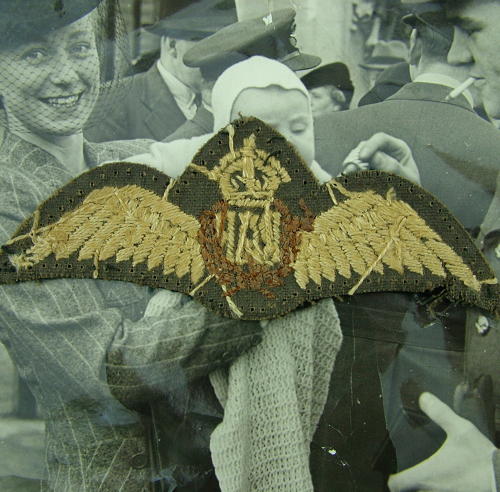