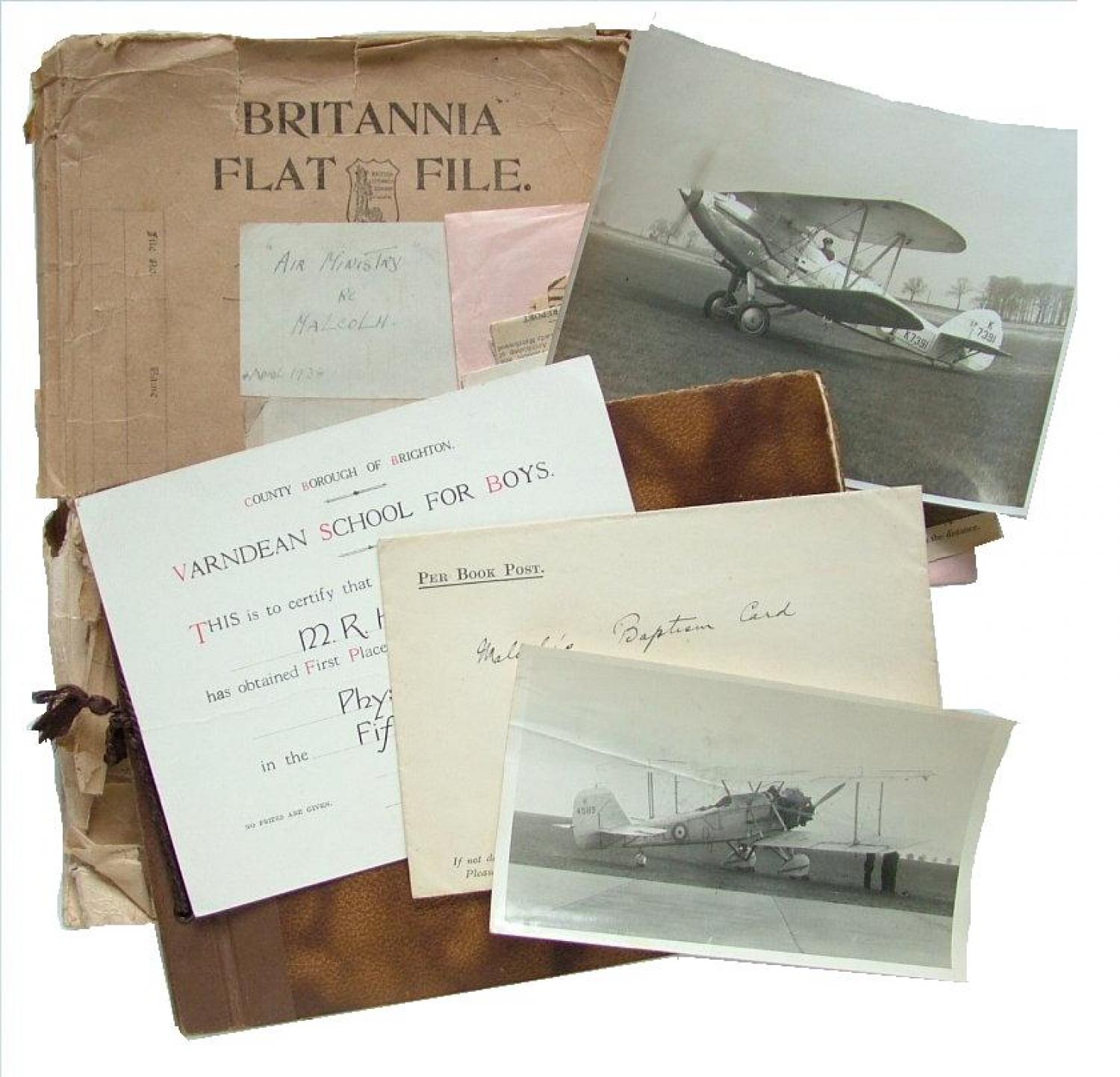 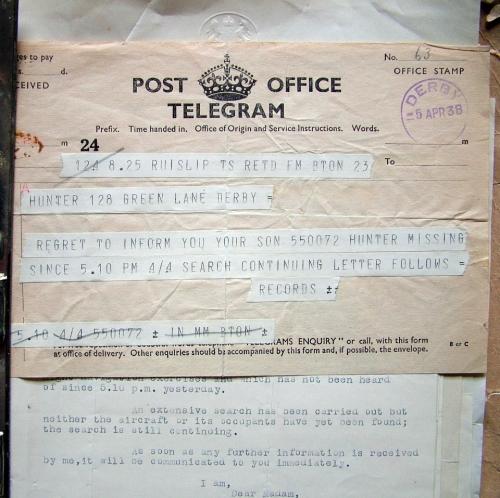 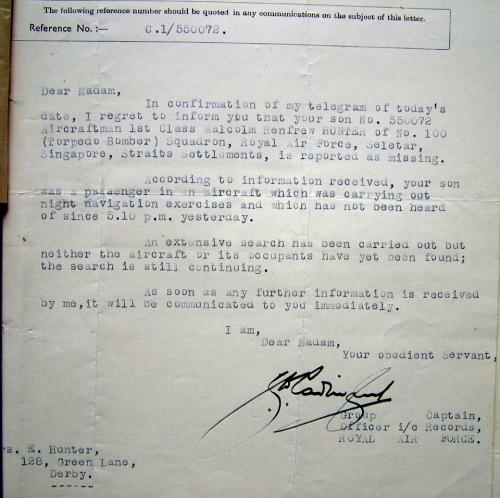 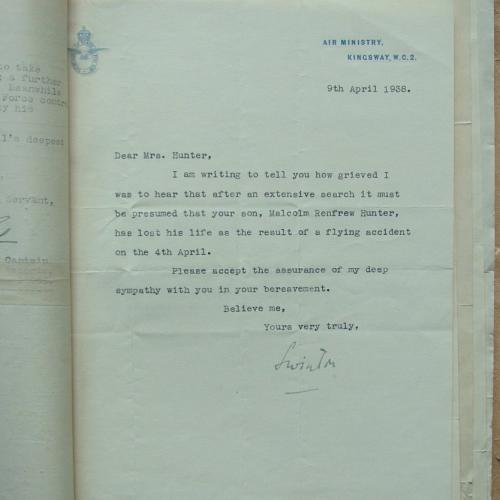 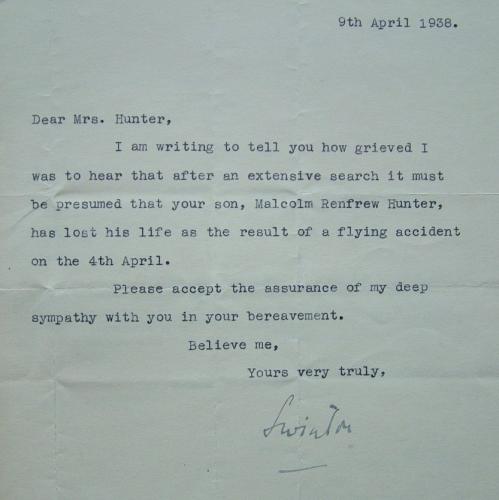 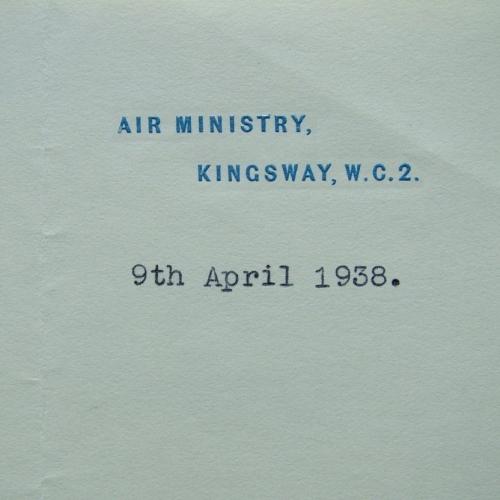 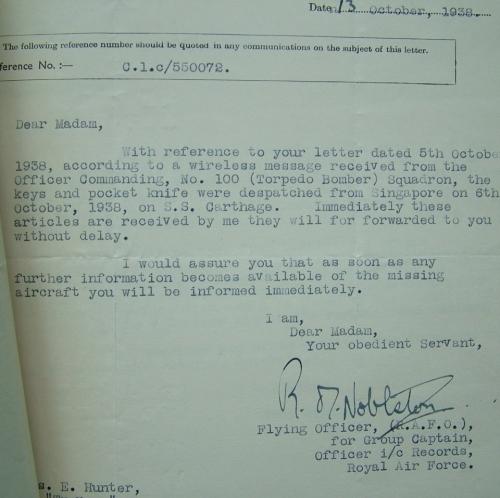 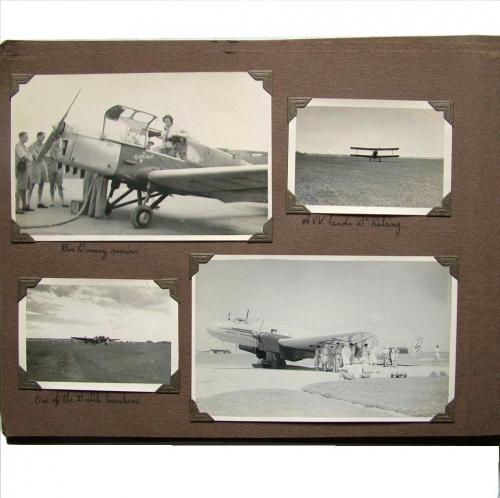 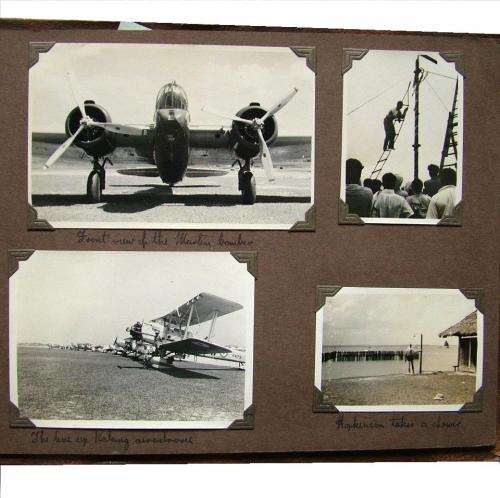 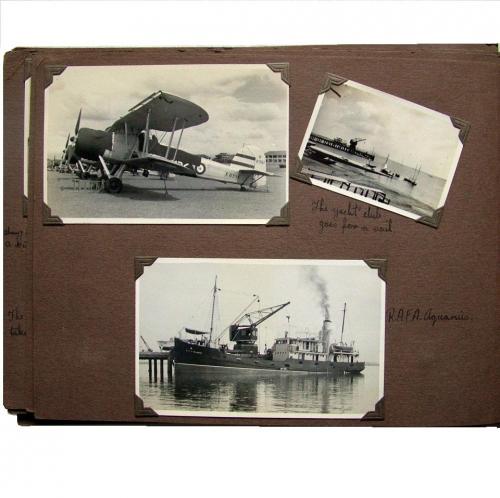 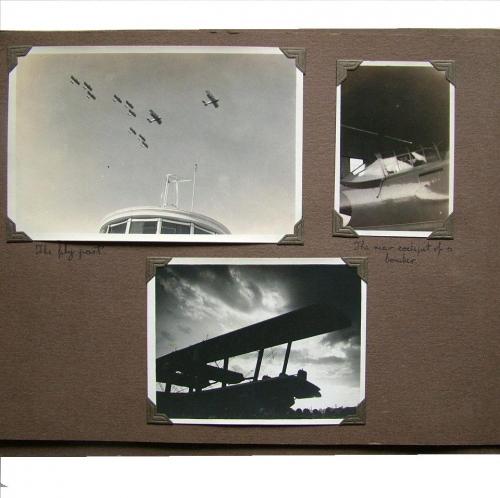 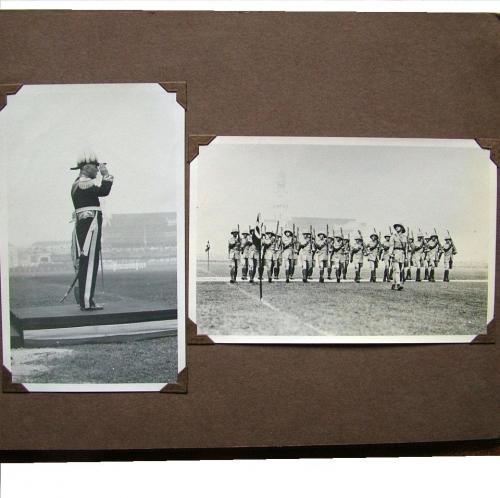 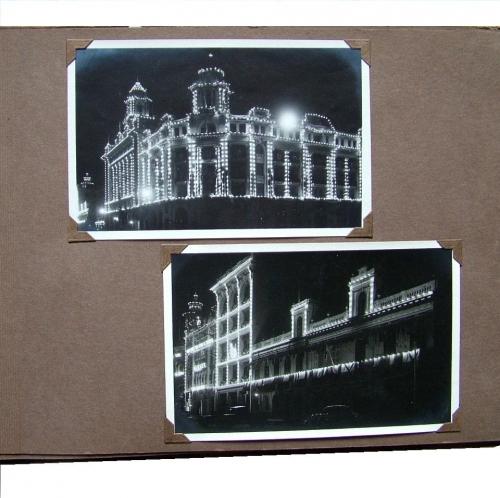 Paperwork and photographs relating to LAC Malcolm Renfrew Hunter, 100 Torpedo Bomber Squadron.  Killed in a flying accident April 4th 1938, Hunter was the wireless operator in the crew of Vickers Vildebeest K4589.  The aircraft was operating in Seletar, Singapore flying in formation with another as part of night navigation exercises.  The formation descended through clouds over Horsboro Light but contact with Hunter's aircraft was lost.  A search by 6 flying boats later that day failed to locate any trace of the missing aircraft. Sgt. William Douglas MacMillan Roberts (pilot), A/C1 Ernest John Beisly and A/C1 Hunter all lost their lives that night.
This paperwork belonged to Hunter's mother and is a record of her correspondence with the Air Ministry.  It begins with the fateful telegram dated April 5th stating that her son was missing. Letters follow with details of the incident when a certain amount of hope was maintained.  Sadly, a letter dated April 9th is received 'presuming that your son Malcolm Renfrew Hunter, has lost his life as the result of a flying accident', although the search wasn't abandoned until 11th April.  Further letters follow from a friend of her son and then a considerable quantity of  letters regarding compensation and pensions.  His mother, unwell and already a widow at 52, was seeking compensation for the loss of her son, stating that she relied on an allowance from him to live on.  The Royal Air Force Benevolent Fund agreed to some short term allowances and the Air Ministry took steps towards a pension.  There is correspondence to and from Hunter's mother and the Air Ministry, a supporting doctor's note relating to her poor health and one relaying her dismay at the amount they eventually granted her.  In addition there are letters relating to the return/sale of her son's personal effects including a list of said effects.  The paperwork begins on 5th April 1938 and ends two years later in April 1940.  It is all bound within a tatty card folder and whilst sound and perfectly legible, all rather creased/worn.  This lot also comes with a photograph album detailing Hunter's time in Singapore with typical 'tourist' type shots of illuminated buildings and others of a 'Coronation Parade by Volunteer Forces'.  Others include photos in and around Kalang Aerodrome  - C-47s, Vildebeest flypast, march past, flying boats and the arrival of famed aviator Mrs Lores Bonney (OBE) in her aircraft 'My Little Ship II' - Bonney, an Australian, was the first female to fly solo from Australia to London and was planning a flight around the world via Japan when WW2 broke out.  Some photos and pages are loose. Approximately 25 are aviation/RAF related.
Further paperwork includes Hunter's school certficate (Physics 1st place 1935), his baptism certificate c.1919 and a letter regarding the entry examination for apprentices in the RAF dated May 1934   FInally there are a few newspaper clippings relating to the accident.  A very interesting a poignant set of documents. Stock code P20588b.