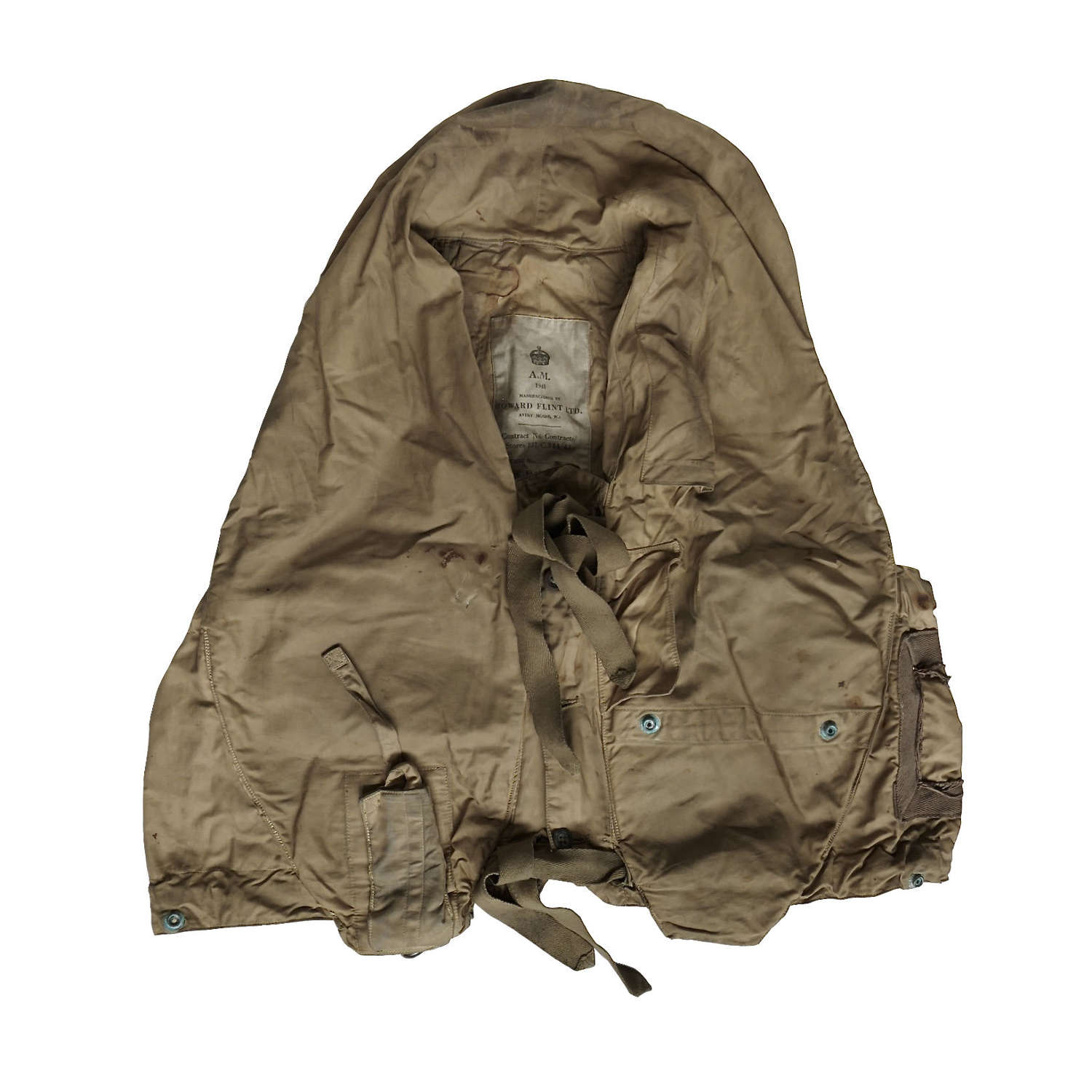 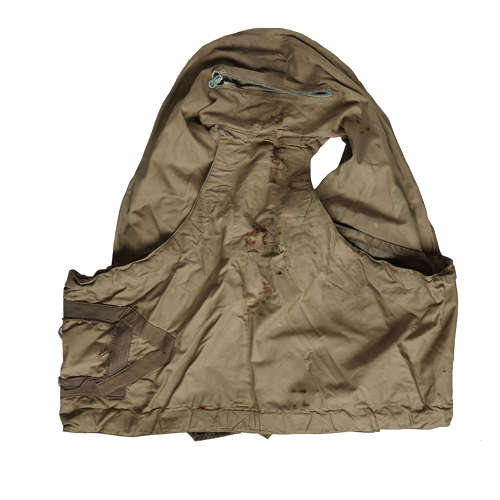 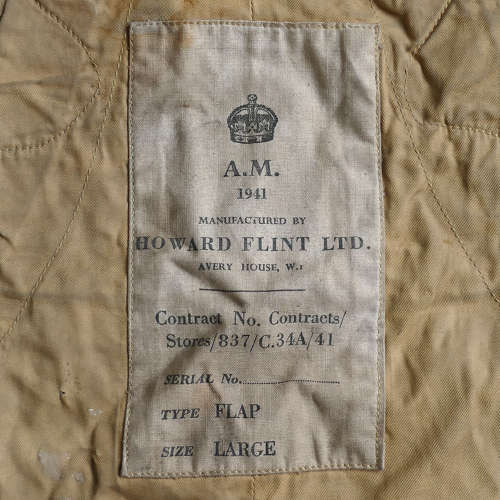 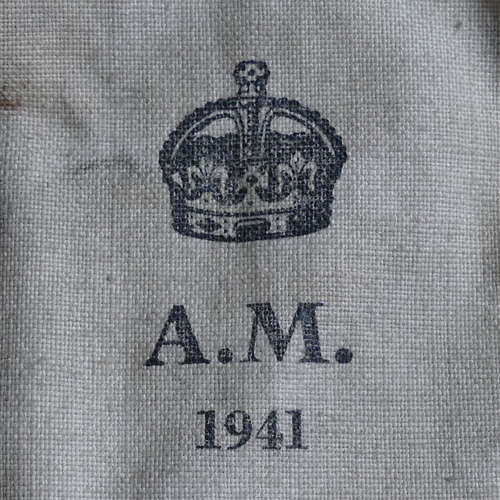 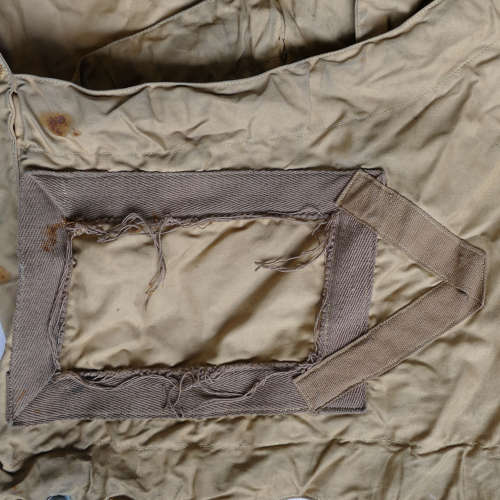 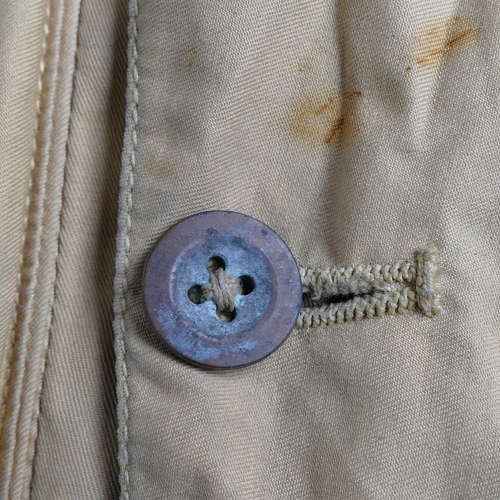 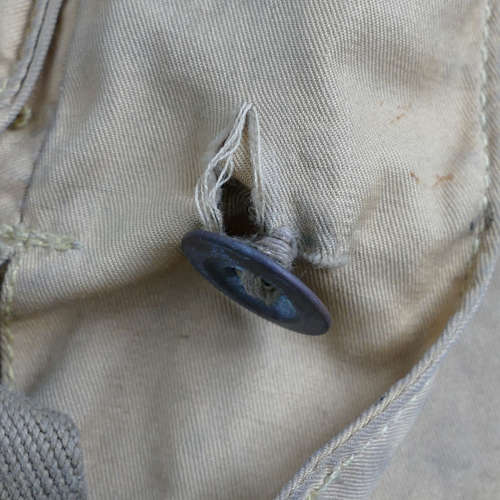 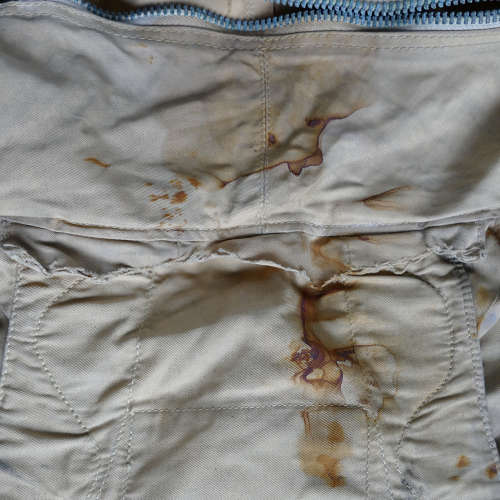 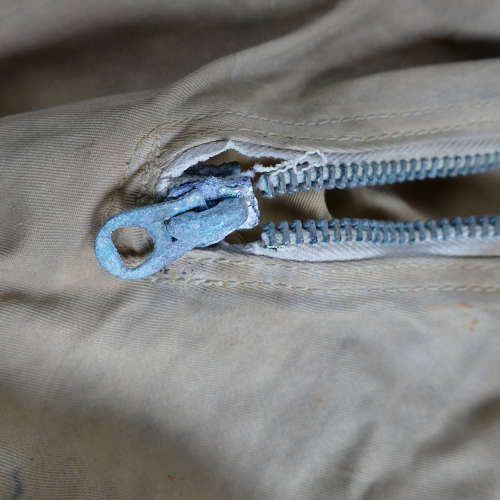 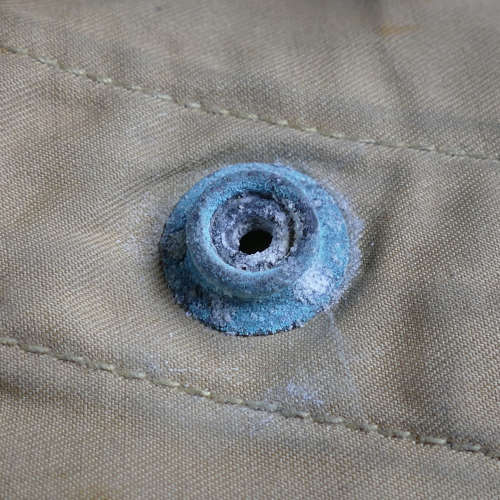 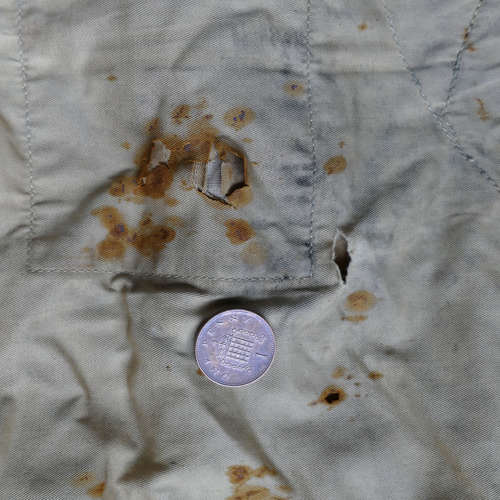 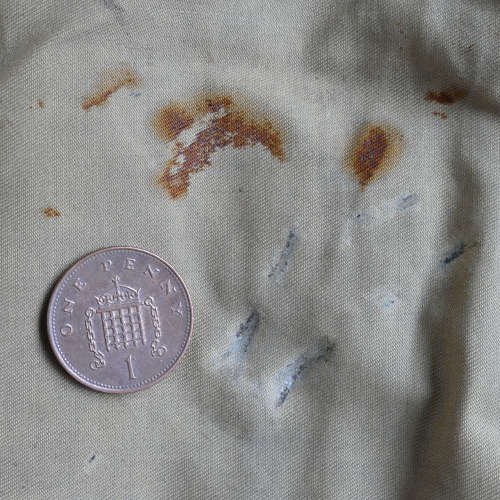 Manufactured by Howard Flint Ltd. of Avery House, W.1 London.  Stores reference 22c/448.  Size large.  Originally produced as one of the incredibly rare 'Flap-Types', later modified with the removal of the flap.  Remnants of it can be seen where it was attached to the back of the Mae-West and it also has the tell-tale press studs on either side of the waist to which the flap was fastened.  The cloth is in reasonably good overall condition.  The majority is perfectly sound but there is minor damage to the front right (as worn) and some small holes to the rear - see photographs.  The Mae West retains good colour but has general soiling and some rust or dye-marker stains in places.  This is an early production model that was never fitted leg straps, grab handles, heliograph/skull cap pocket, flotation lamp pocket or lifeline and toggle seen on most 1941 Mae Wests.  It has early solid brass buttons rather than the later plastic type and was fitted with a fluorescene flap/dye pack (now absent).  It also has the webbing tying tapes and inflation lever flap.  The zip fastener is corroded/broken but we can supply an original replacement at extra cost should the buyer wish to change it.  Note the superb original label with clear printed 1941 date.
This example belonged to Spitfire pilot Flight Sergeant Roy Thomas Littlewood D.F.M. (1622796), 111 Squadron.  His D.F.M. citation reads 'During recent operations culminating in the crossing of the Rivers Senio, Piave and Po, this airman pilot has carried out 24 sorties against the enemy with consistently excellent results which can be attributed only to the tenacity and determination with which he has pressed home his attacks, often in the face of heavy enemy anti-aircraft fire. He has destroyed and damaged many enemy M/T vehicles, gun posts and other vital objectives by his accurate bombing and strafing. His outstanding example of gallantry and devotion to duty coupled with his keenness to destroy the enemy where ever he could be found and the excellence of the results has been an example to his fellow pilots during a period of intense operations.'  His commanding officer wrote 'Flight Sergeant Littlewood has displayed the highest qualities of personal bravery and his fine results against heavily defended targets testify to his undoubted ability. He has been a source of admiration and a magnificent example to all in his squadron. Strong recommended for the Distinguished Flying Medal.'  The Mae West was sold by his son a few years ago. A couple of photocopied photographs of the pilot will be included in the sale.  A bit tatty/worn but a rare early variant with interesting history.   Stock code MW21978.

Note. We listed this a few years ago but had to remove it from sale when it was misplaced.  It was recently rediscovered in our stockrooms.