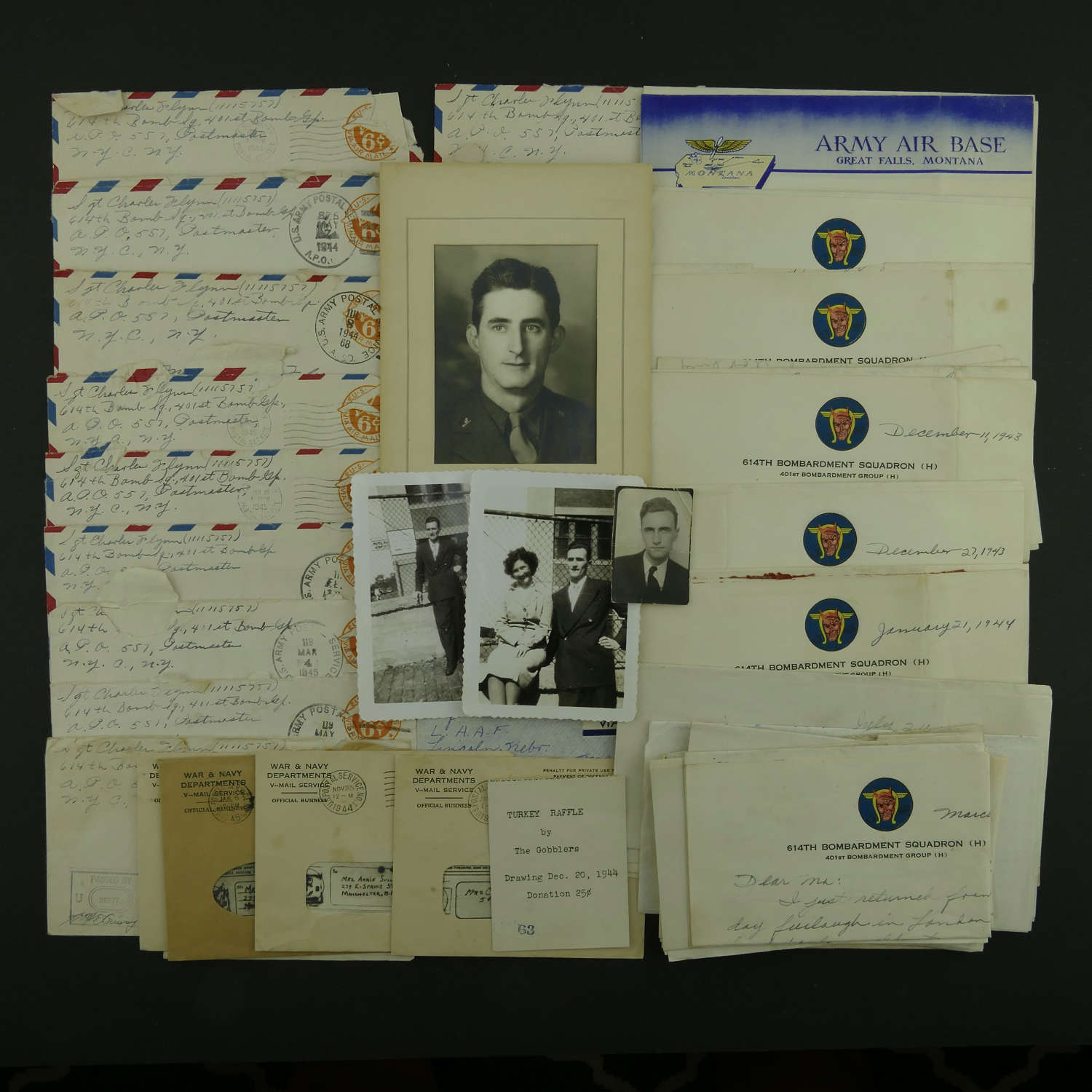 Letters sent by Sergeant Charles Flynn (11115757), of the 614th Bombardment Squadron, 401st Bombardment Group.  The 401st moved to AAF station 128 at Deenethorpe near Corby, Northamptonshire, England, during October/November 1943, and served in combat with the 8th AAF between November 1943 and April 1945.  Sgt. Flynn appears to have been a groundcrew mechanic.  He served at Fort Bragg in the USA prior to his posting to England during 1943, where he remained until repatriation in mid to late 1945.  Many of the letters are still in their original envelopes and are on official Bombardment Squadron / Group headed paper featuring the devil's head motif, the 614th was known as 'The Lucky Devils'.  The majority were addressed and sent to his mother in Dorchester, Massachusetts and the envelopes have censor stamps on them, ' Passed By US Army Examiner'.  In them he talks about trips around the country on leave - London (better subway than in Boston), Coventry - noting the bombing, Cambridge, Scotland etc.  He also mentions difficulties in obtaining things in the shops because of rationing and appeared to be obsessed with his hair, asking on several occasions for hair tonic to be sent over as the 'stuff over here is useless!'. There are some mentions of his work, 'Our squadron is doing alright though the nazis have knocked down a few planes' and of D-Day, ' great to see all those airplanes flying overhead', 'planes flying almost every day and you would be surprised at all the things that go wrong with these B-17s'.  He also talks about not having seen any flying bombs, the London blackout, his bomb group receiving a distinguished unit citation, a party for about 100 local children in the mess and that British films are not a patch on US ones!  In February 1945 he mentions a party to celebrate the 200th combat mission with General Doolittle in attendance.  The day after VE-day he was taken up in a B-17 over Germany to see the bomb damage.  He also talks about marriages to English girls, dances in typical 'Limey' towns, the jitterbug and so on.  By September 1945 he is back in America but not yet discharged.  There are also a couple of V-mails from him and three from his brother, Private Lawrence Flynn of B Company, 36 Engineers - somewhere in Southern France.  The correspondence comes with a few small photographs of Flynn, one showing him in uniform.  A fascinating and rare first hand insight into one man's life on a wartime US base in England.  Approximately 28 letters in total, most with 2 sheets per letter.  Stock code P24215A-175. 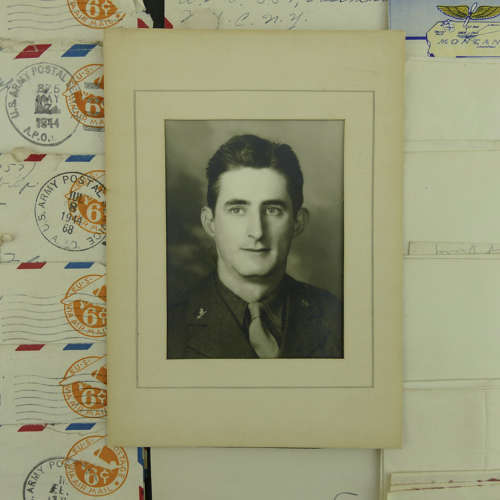 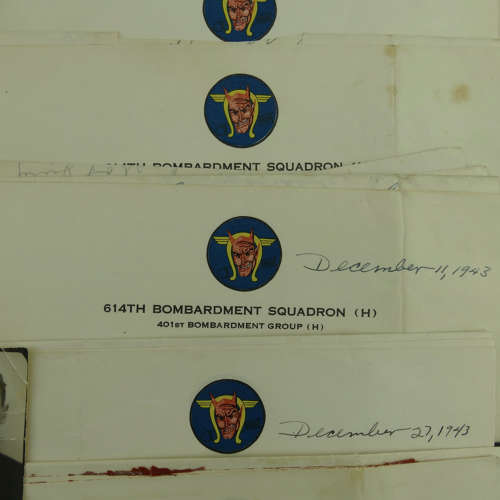 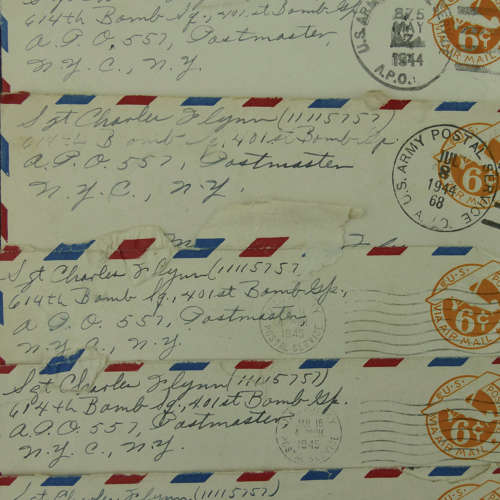 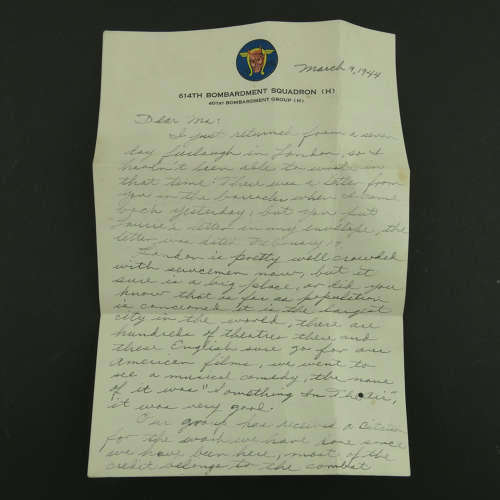 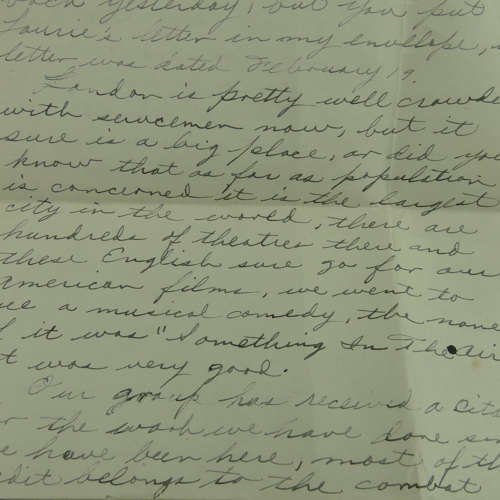 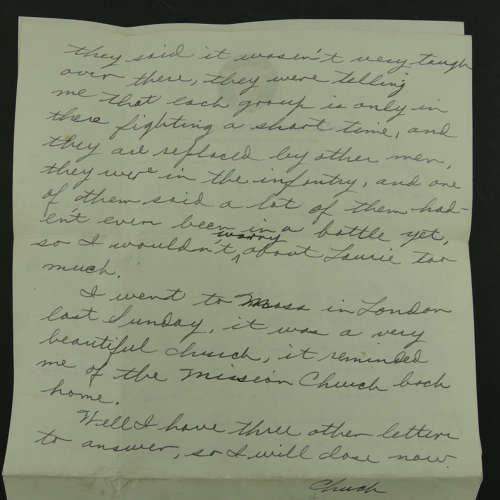 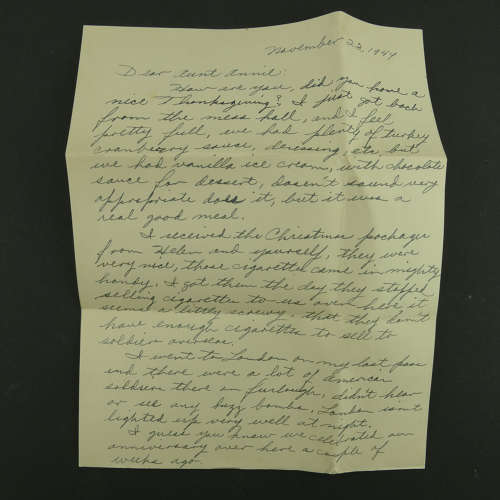 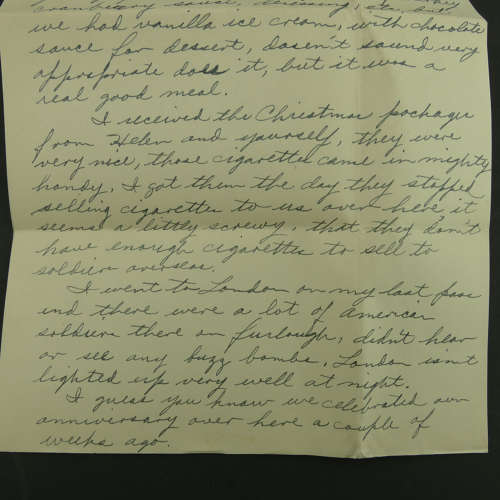 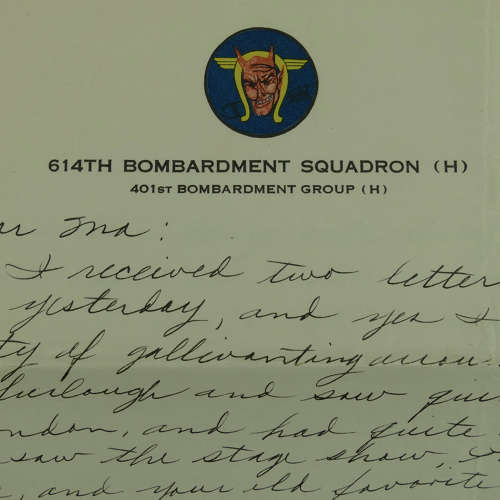 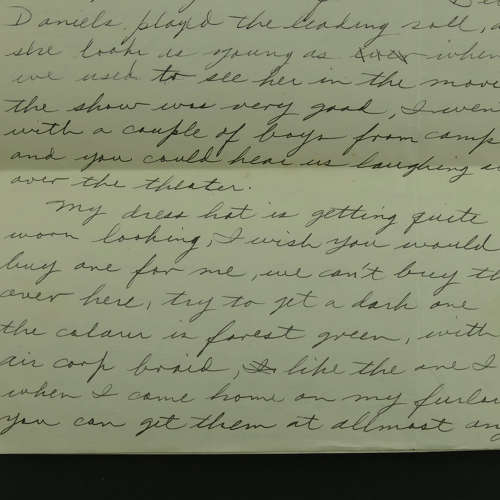 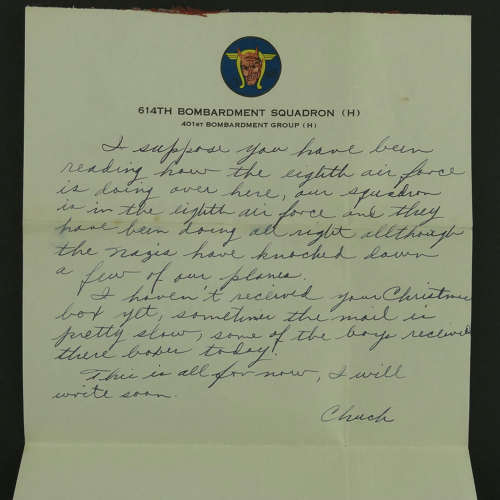 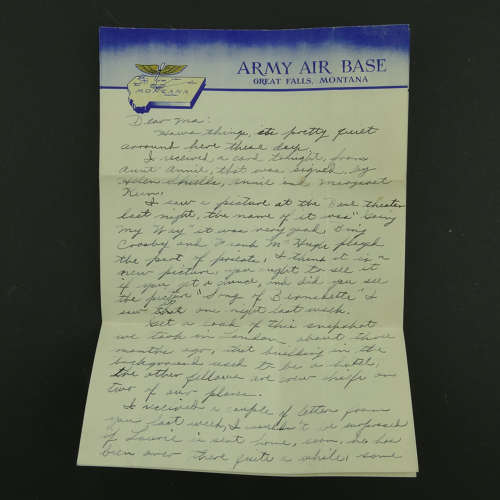 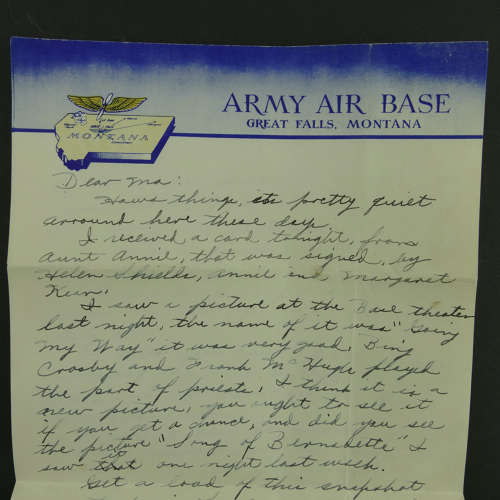 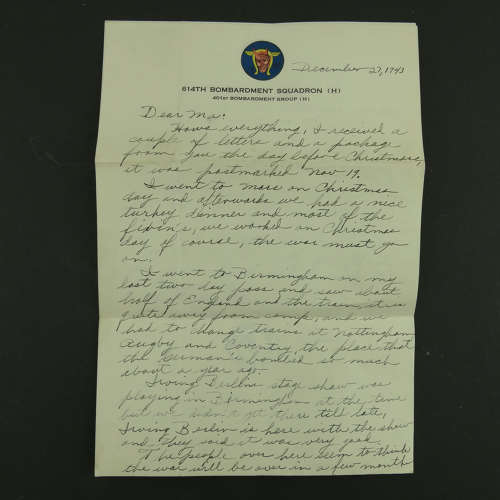 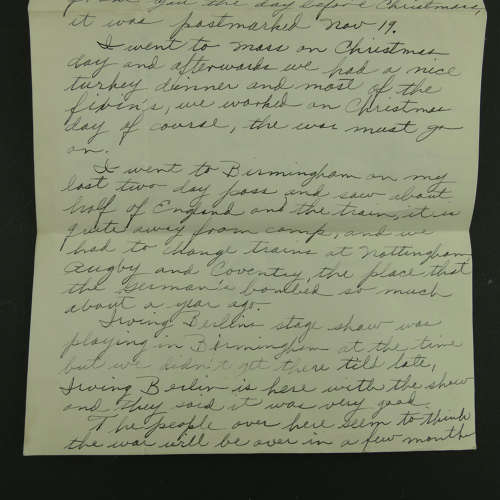 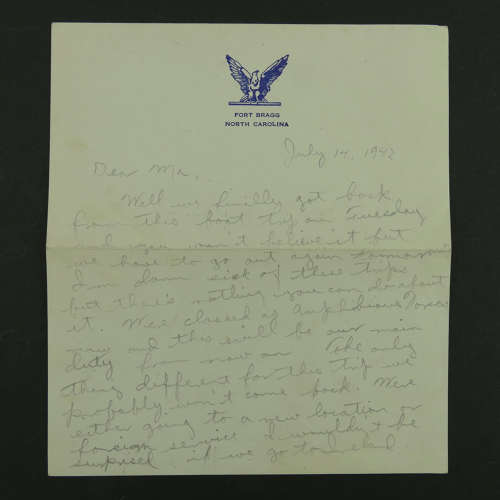 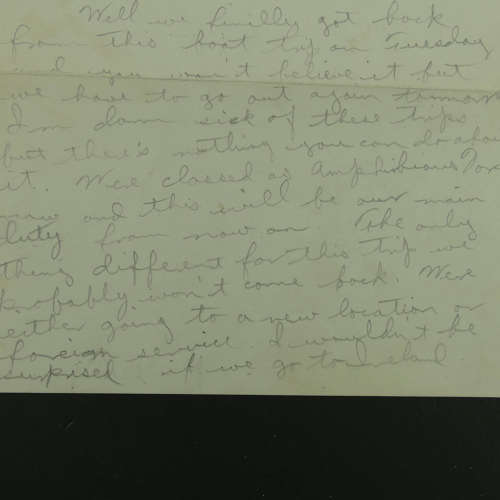 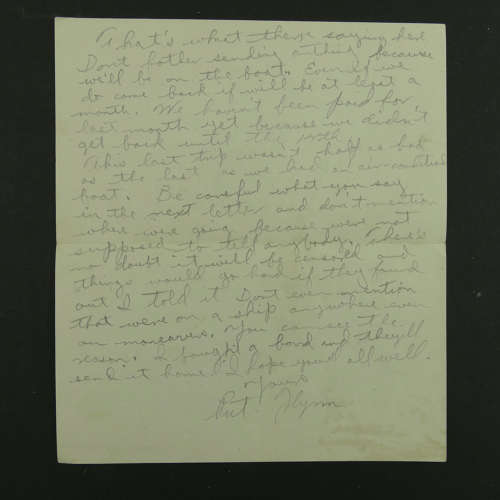 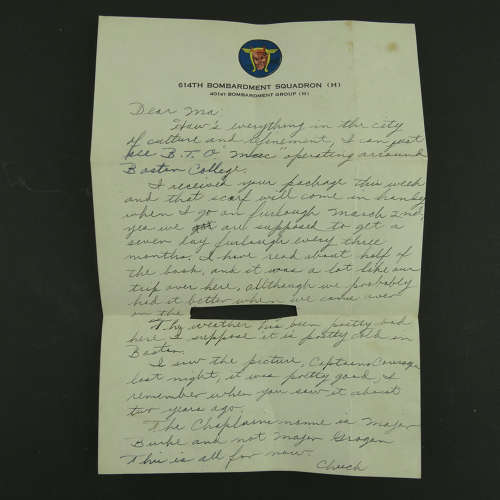 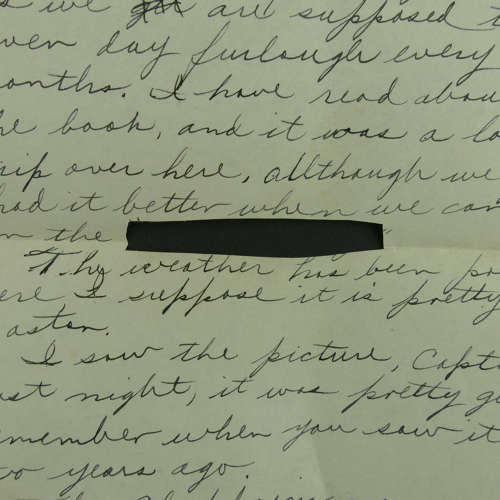