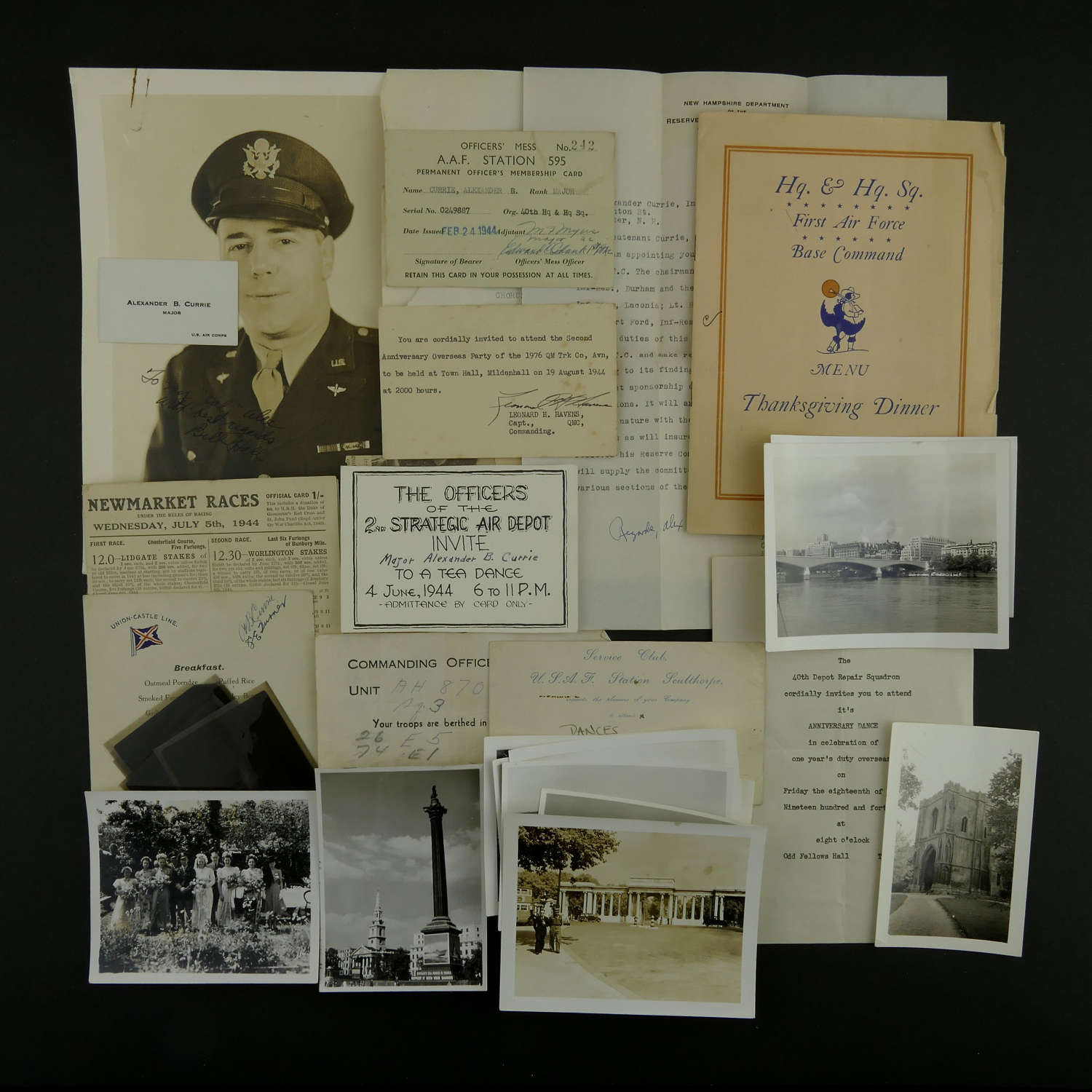 Mixed paperwork grouping to Major Alexander B. Currie  (0249887) who was based at AAF Field Station 595 (Troston, Suffolk, England) as part of the 2nd Strategic Air Depot, 8th AAF.  Strategic and Air Base Depots dealt with major aircraft overhauls and other requirements to back up local service units.  The paperwork includes his U.S. Air Corps calling card; his officers' mess AAF station 595 membership card dated February 1944; a card invitation to the Second Anniversary Overseas party of the 1976 QM Trk Co to be held at Mildenhall Town Hall in August 1944; card invitation from the officers of the 2nd Strategic Air Depot to a tea dance in June 1944; paper invitation from the 40th Depot Repair Squadron to an anniversary dance in celebration of one year's duty overseas to be held in Thetford in August 1944; a card invitation from the officers and men of the 9th Depot Repair Squadron to an anniversary party and dance at Culford Hall in August 1944; a thin paper programme of events for the 'Rally Of Boys' held at the Lyric theatre c. April 1944; an official card from Newmarket Races dated July 1944 with all of his bets marked on it in pencil; a First Air Force Base Command Thanksgiving Dinner menu card dated 1941 (he was CO of Hq. Sqdrn.); a Union Castle Line menu card dated November 1943, signed by him; an American newspaper clipping dated July 1942 with a photograph of Currie and other AAF officers who were preparing Richmond Air Base for action.  There is also a pre-war letter to him regarding his membership of the Reserve Officers Association (c.1936) and approximately 13 photographs (around 12 x 10cm) including a wedding with two AAF officers and a RAF officer.  Some of the photos are of the area around Aberdeen and others include the White Cliffs of Dover, London (including Nelson's Column with wartime hoardings at the base 'Britain's Sea Power Is Yours - Support It With Your Savings', Bury church and two of Paris.  Other items include a transport ship berthing slip, typed list of camp supply property etc.  Finally, there is a large (20 x 25cm) signed AAF photograph given to him by the officer pictured and signed 'To my pal Alex with best regards Bill Hall'.  Generally in good used condition.  An interesting 8th AAF group worthy of some research.  Stock code P24215A-160. 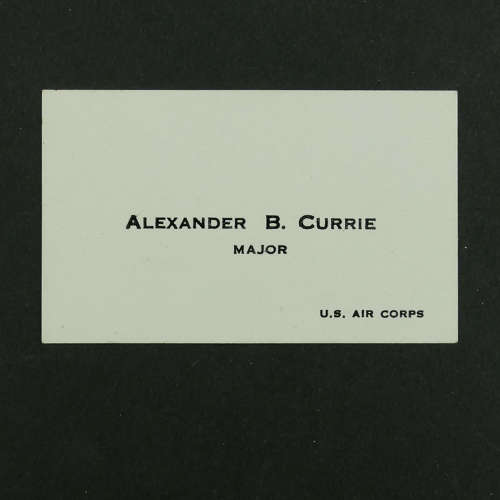 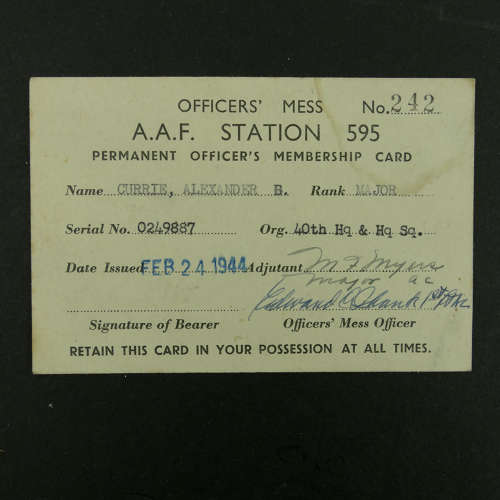 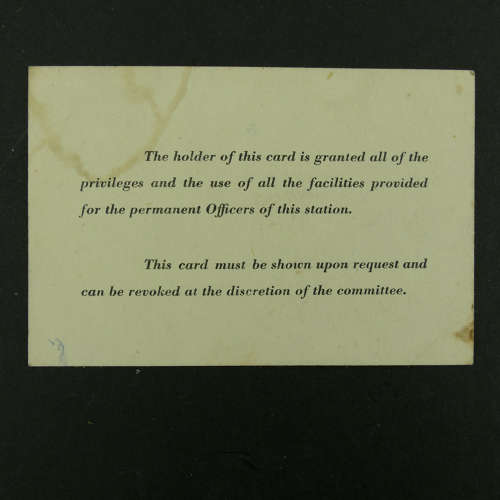 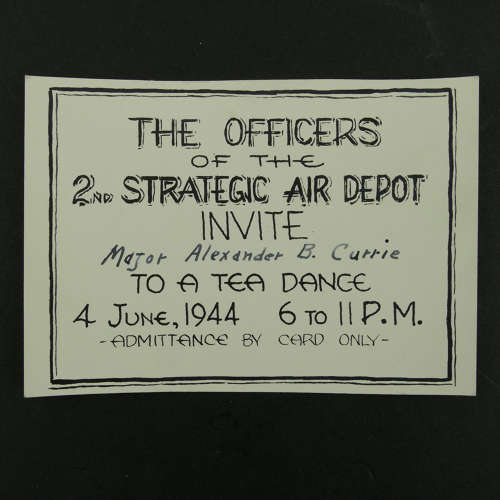 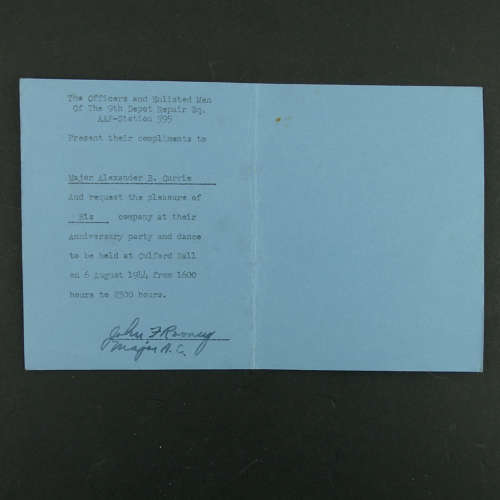 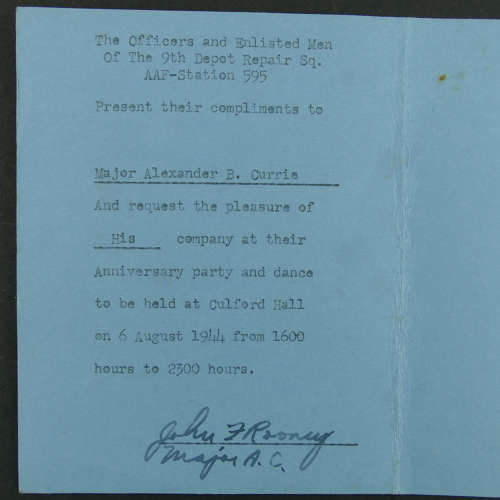 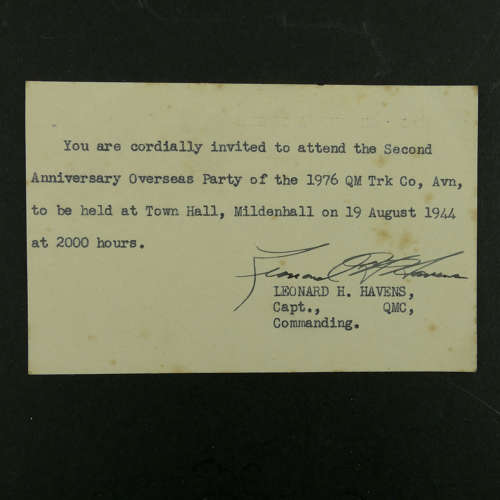 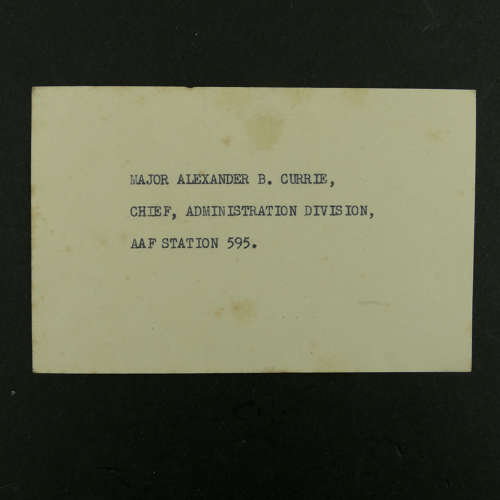 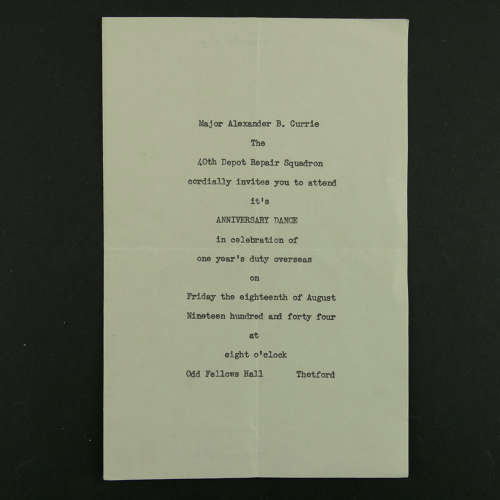 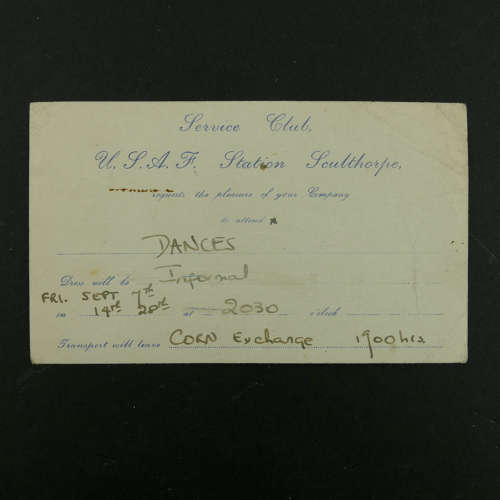 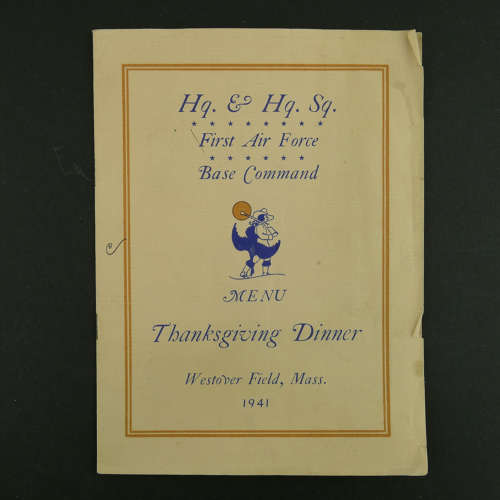 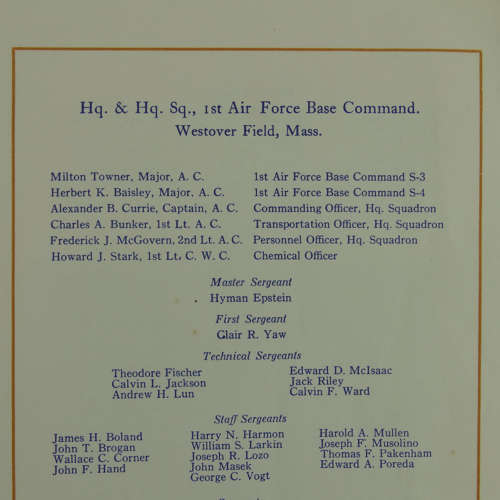 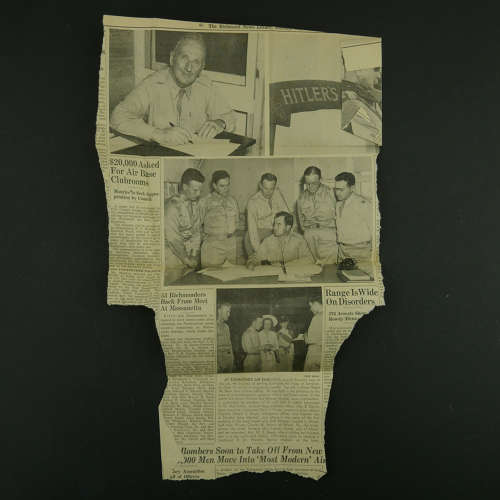 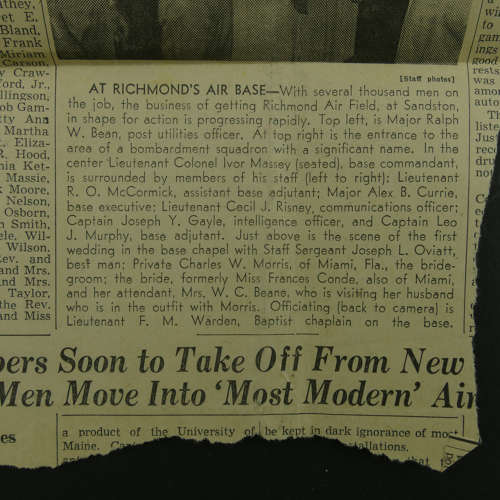 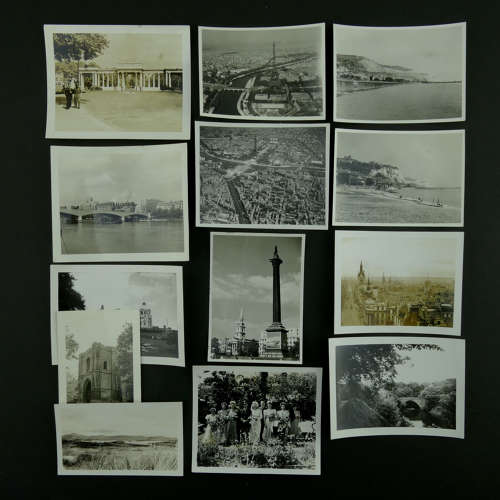 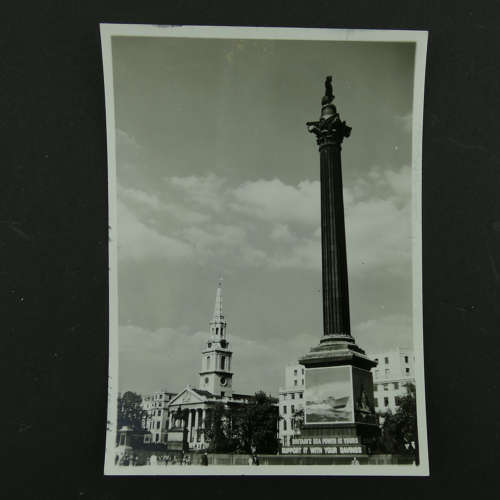 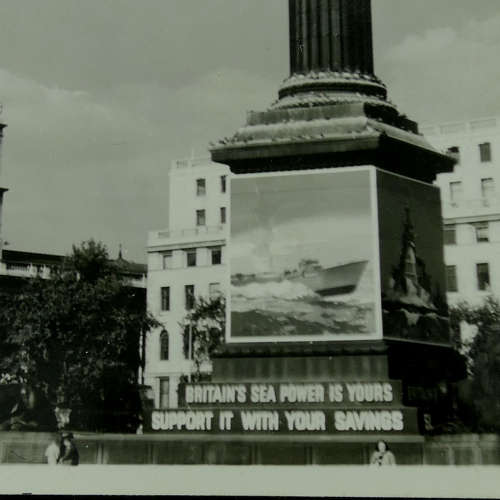 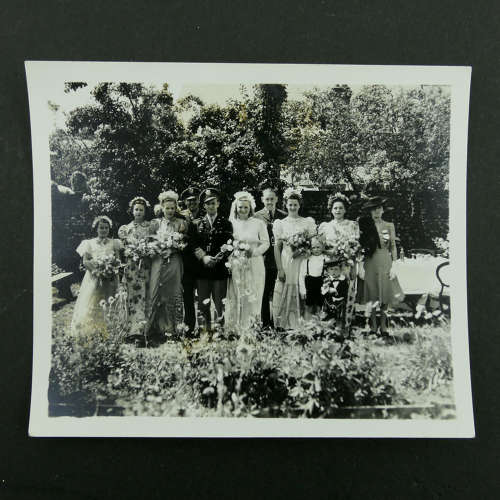 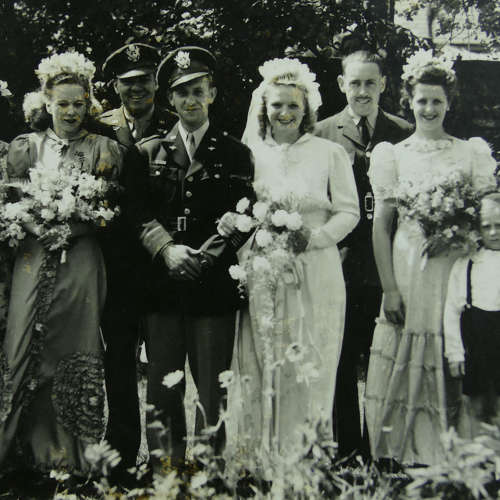 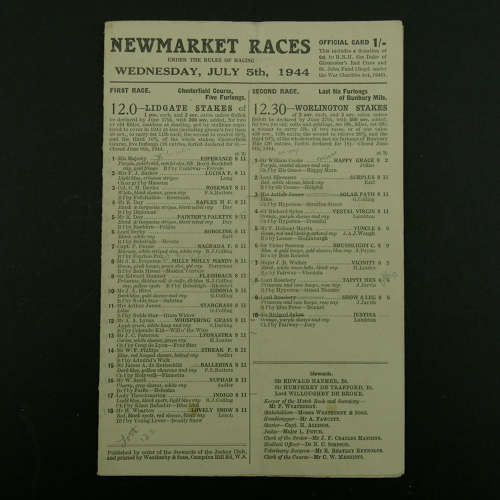 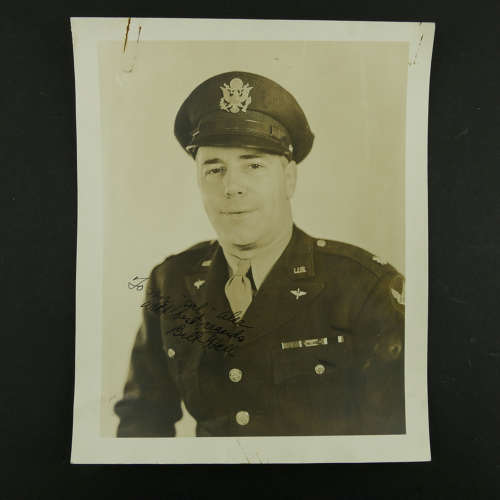 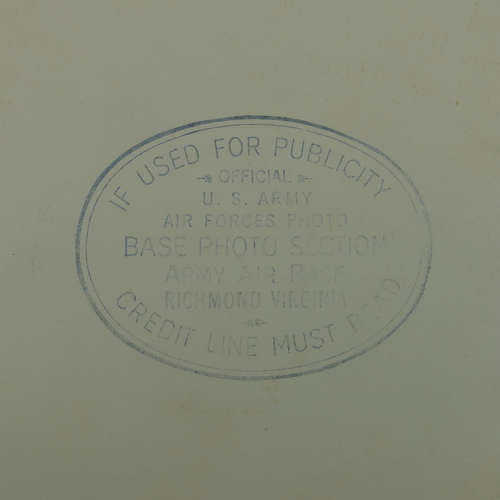