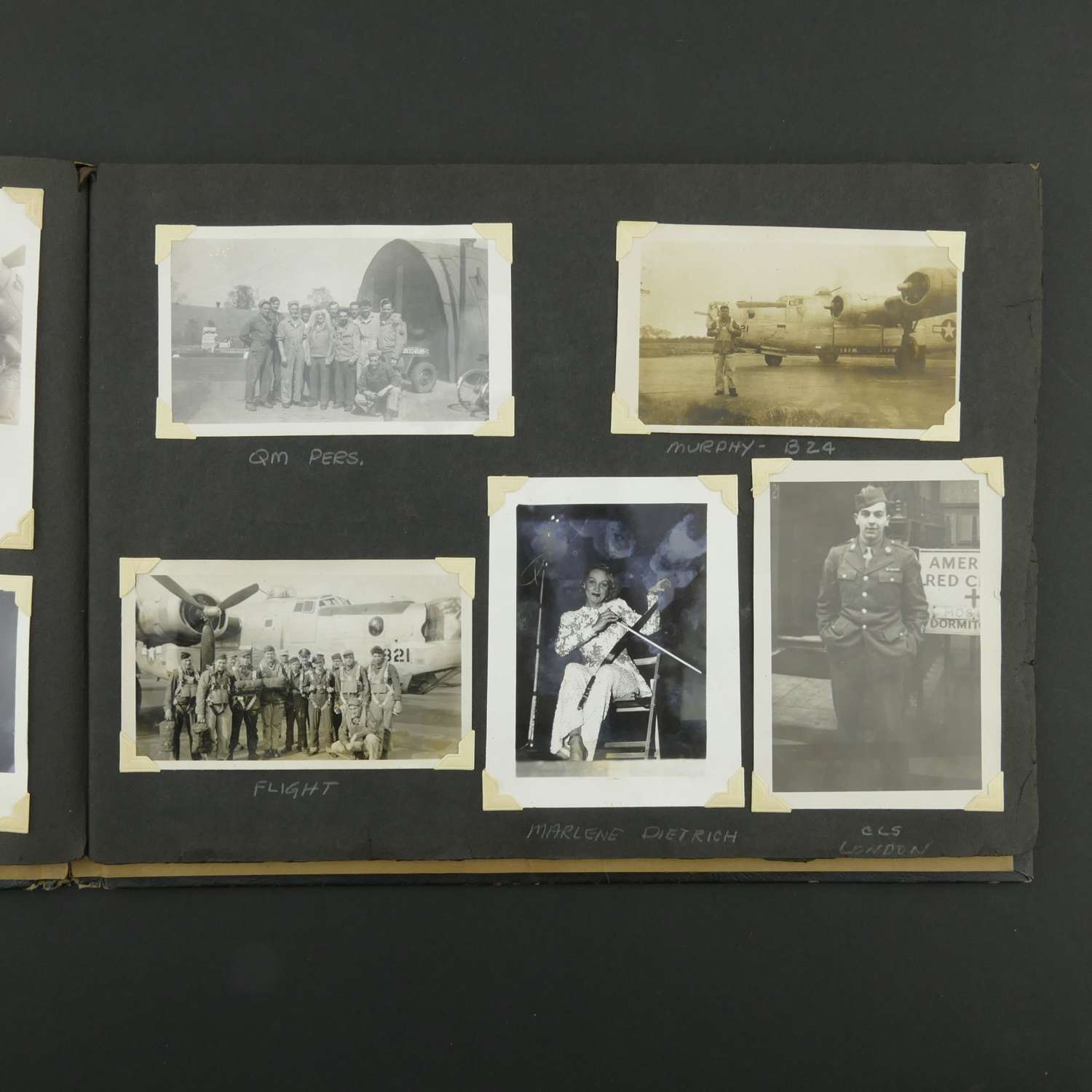 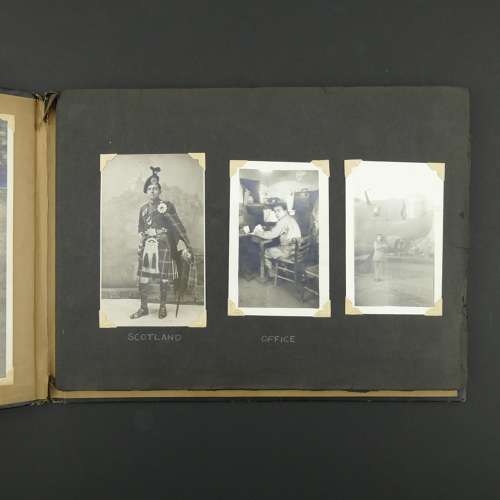 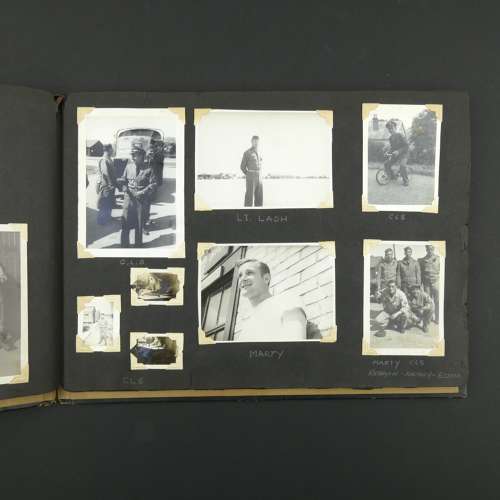 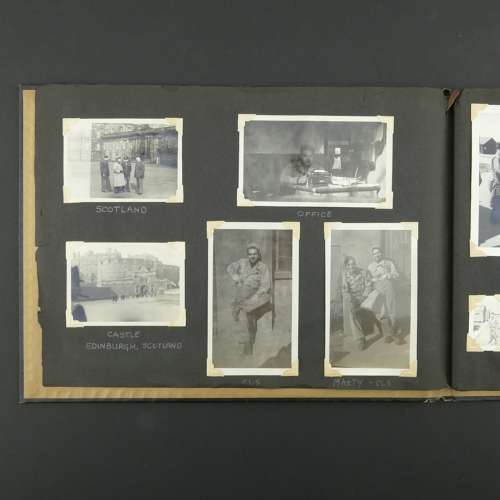 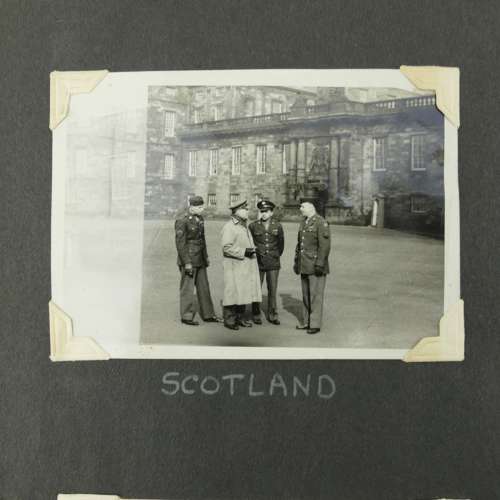 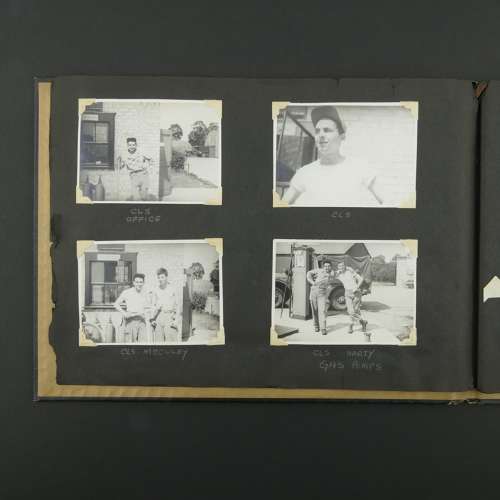 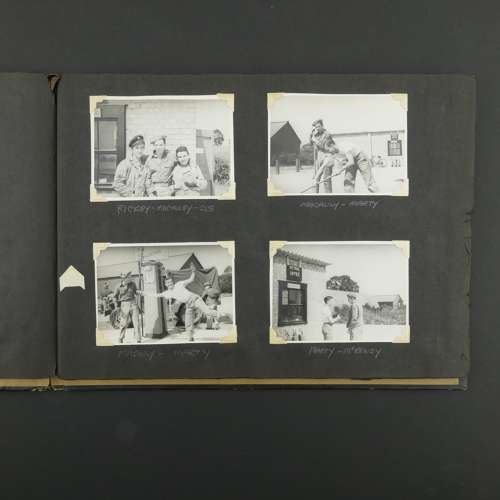 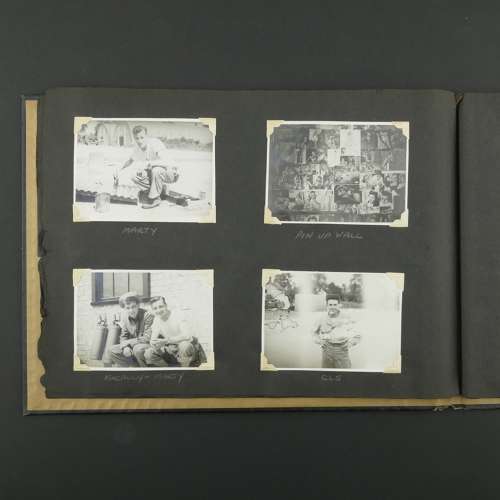 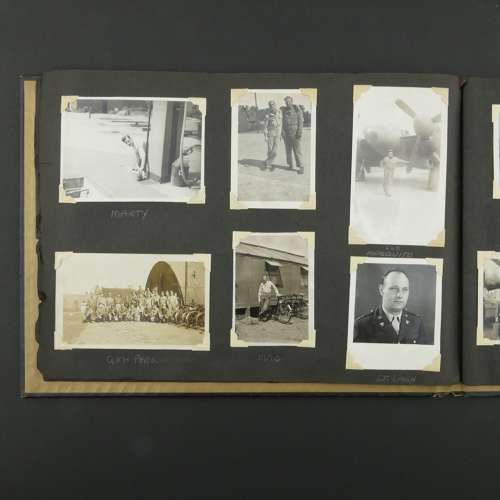 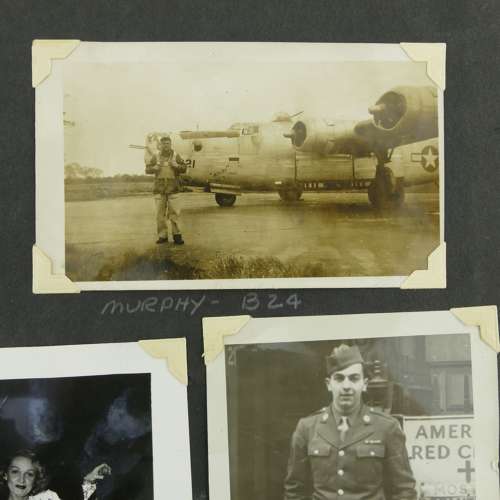 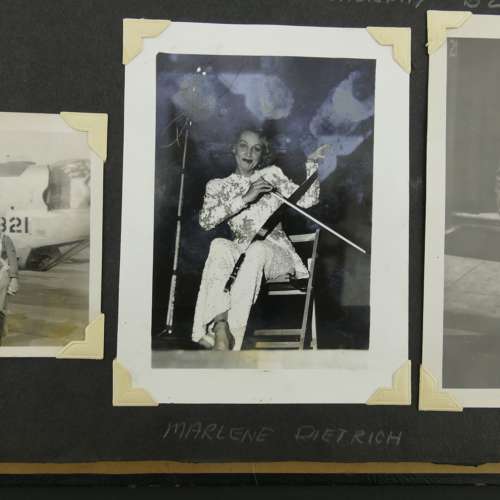 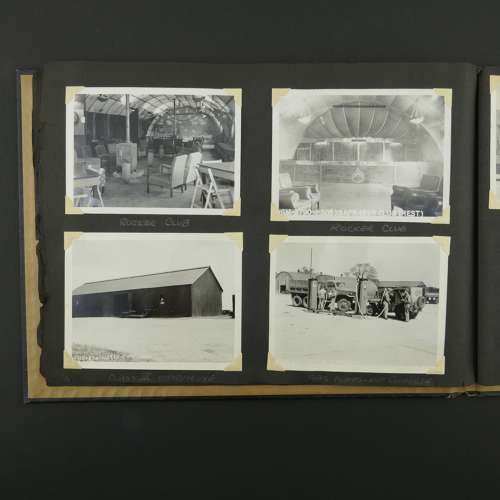 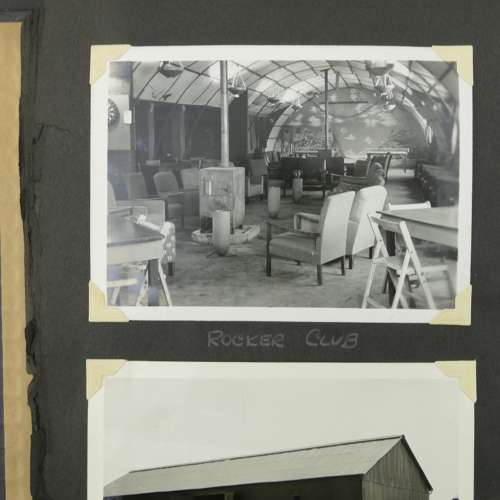 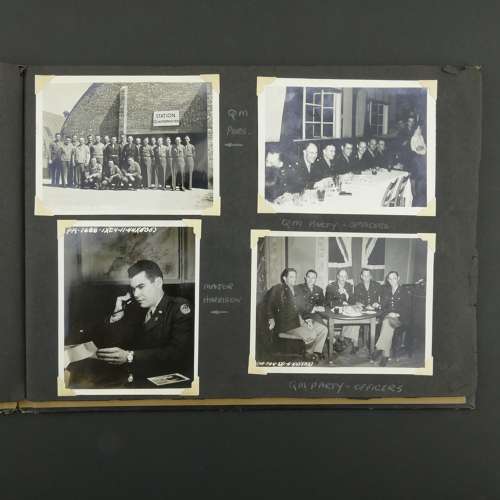 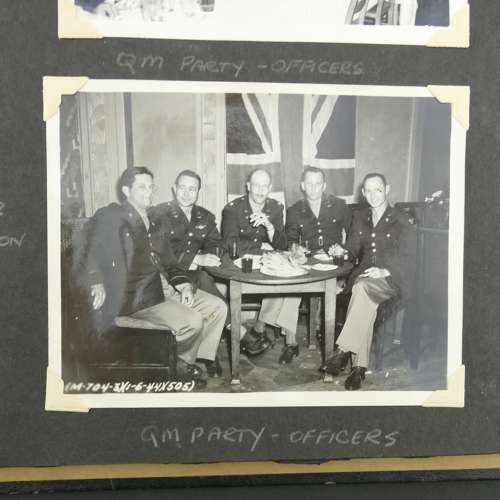 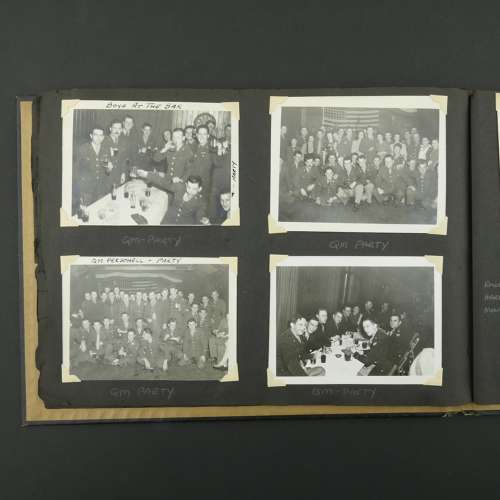 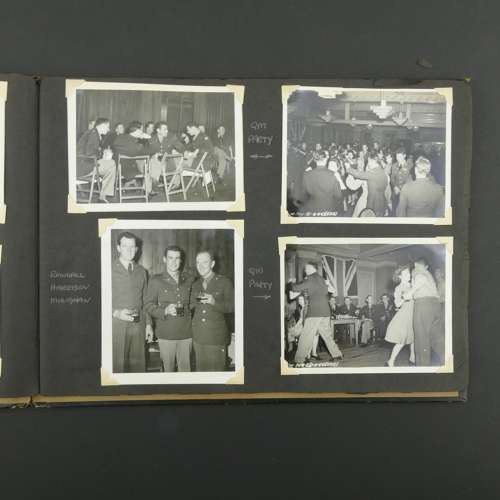 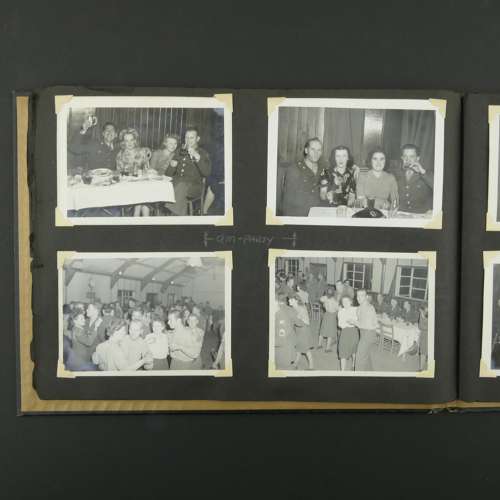 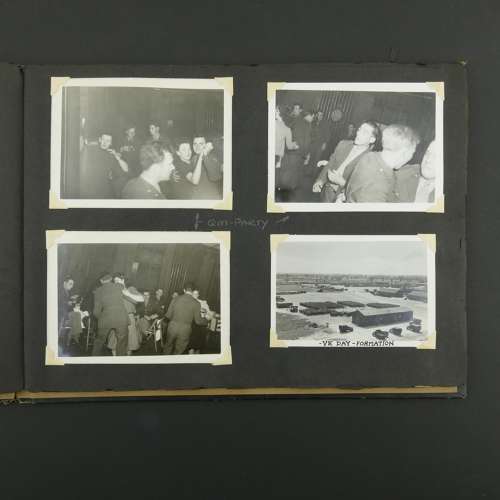 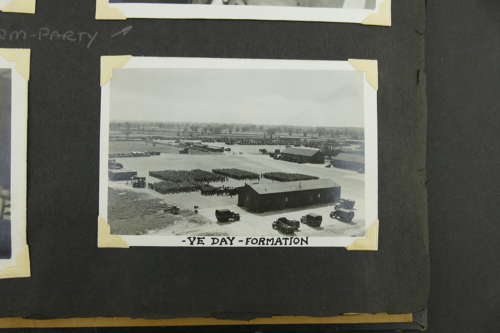 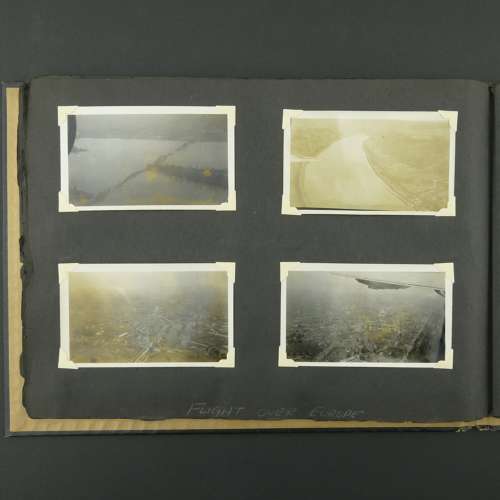 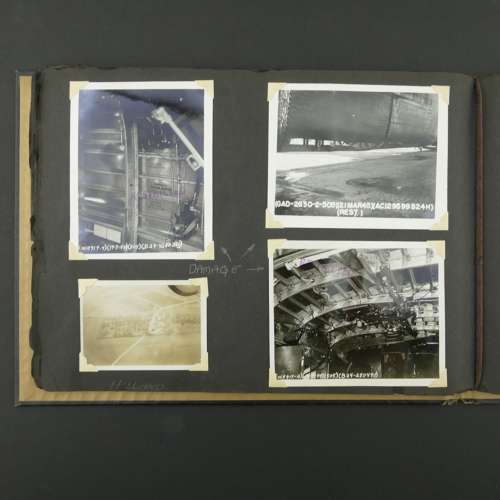 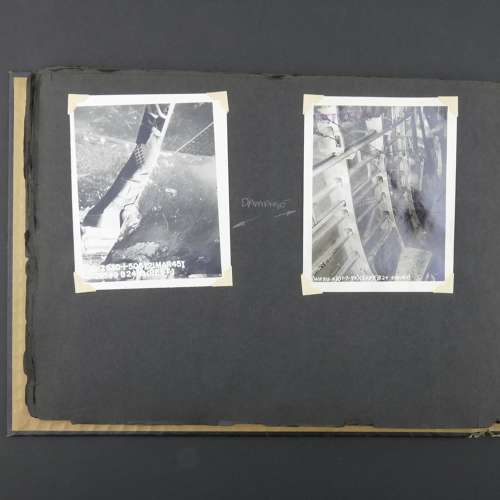 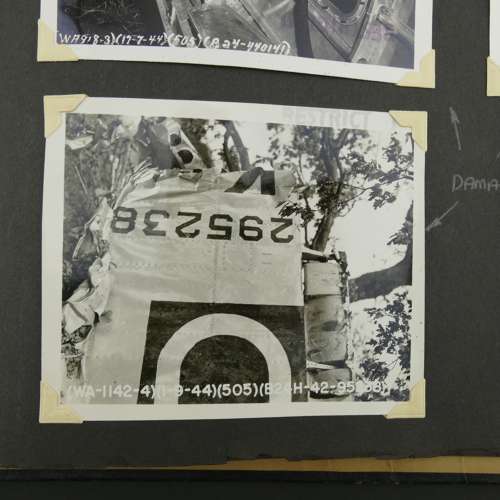 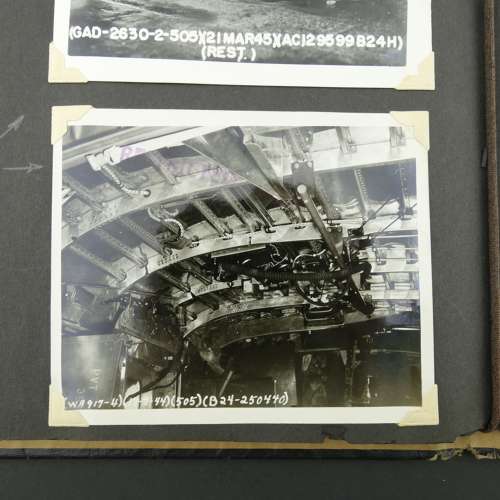 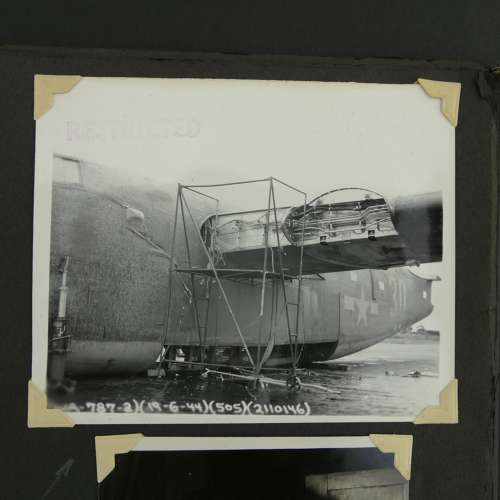 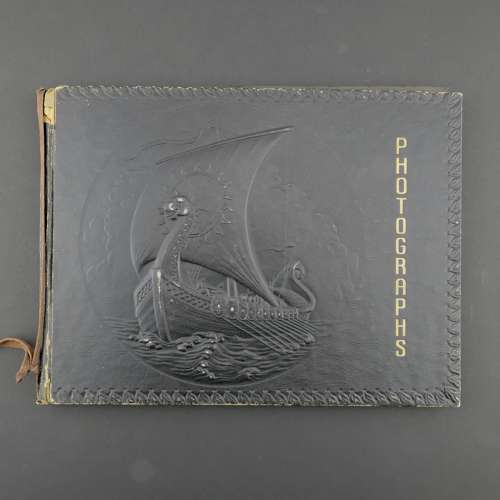 Photograph album of George G. Meade USAAF.  He joined up in July 1942 and served with the 8th AAF, coming to the UK in July 1943 and was stationed at Watton, Norfolk (AAF Station 376).  This was an ex RAF base turned over to the AAF for use as an Air Depot c. 1943. Watton was expanded to become part of the 3rd Strategic Air Depot undertaking major overhauls for B-24 Liberators of the 2nd Air Division.  It was also assigned as the 802nd Recon Group (weather squadrons) comprising 652th BS (H) flying B-24s & B-17s on long range weather flights around the British Isles; 653rd BS (L) flying Mosquito XVIs on similar duties over enemy territory and 654th BS (P) on Mosquito XVIs flying photo reconnaissance missions. Later duties included 'chaff' screening flights for bomber missions.  In August 1944 Watton was given the authorized designation of 25th Bombardment Group (Reconnaissance.  The group flew a total of 3370 sorties for the loss of 15 aircraft.

The album has photos of Meade in Scotland at Edinburgh castle including one with James Doolittle (?) and many on and around the base at Watton.  These include photographs of him and his colleagues in uniform and also of aircraft on the base including B-24s and a Mosquito.  There is even a photo of Marlene Dietrich playing the saw.  Others show Nissen huts, the 'Rocker Club', the Quartermaster (QM)  buildings and staff and a selection of images of the QM party.  These show many personnel in uniform, dancing, at the bar etc.  Many have clearly visible '8th' shoulder patches.  There is a photograph of the VE Day formation on the base and then 8 more of a post VE day trip over Europe.  The final 10 'officia'' images show the damage caused to some of their airframes (all captioned/dated on the lower edge).  In total there are approximately 86 photos.  They are mounted in the album with photo corners (not glued).  Some are captioned on the rear, some on the album page and some are marked 'Restricted' or 'Passed by the Censor'.  Sizes vary with a few tiny 4 x 3cm and quite a few at 7 x 11cm  and 13 x 10cm.  The album itself if produced in thick card and decorated with a Viking longboat in relief on the cover.  It shows use and wear with some damage to the spine area.  Inner pages are typical of wartime albums with black paper that is somewhat brittle and has small edge tears and some paper loss.  An interesting album.  Stock code P24215A-118.