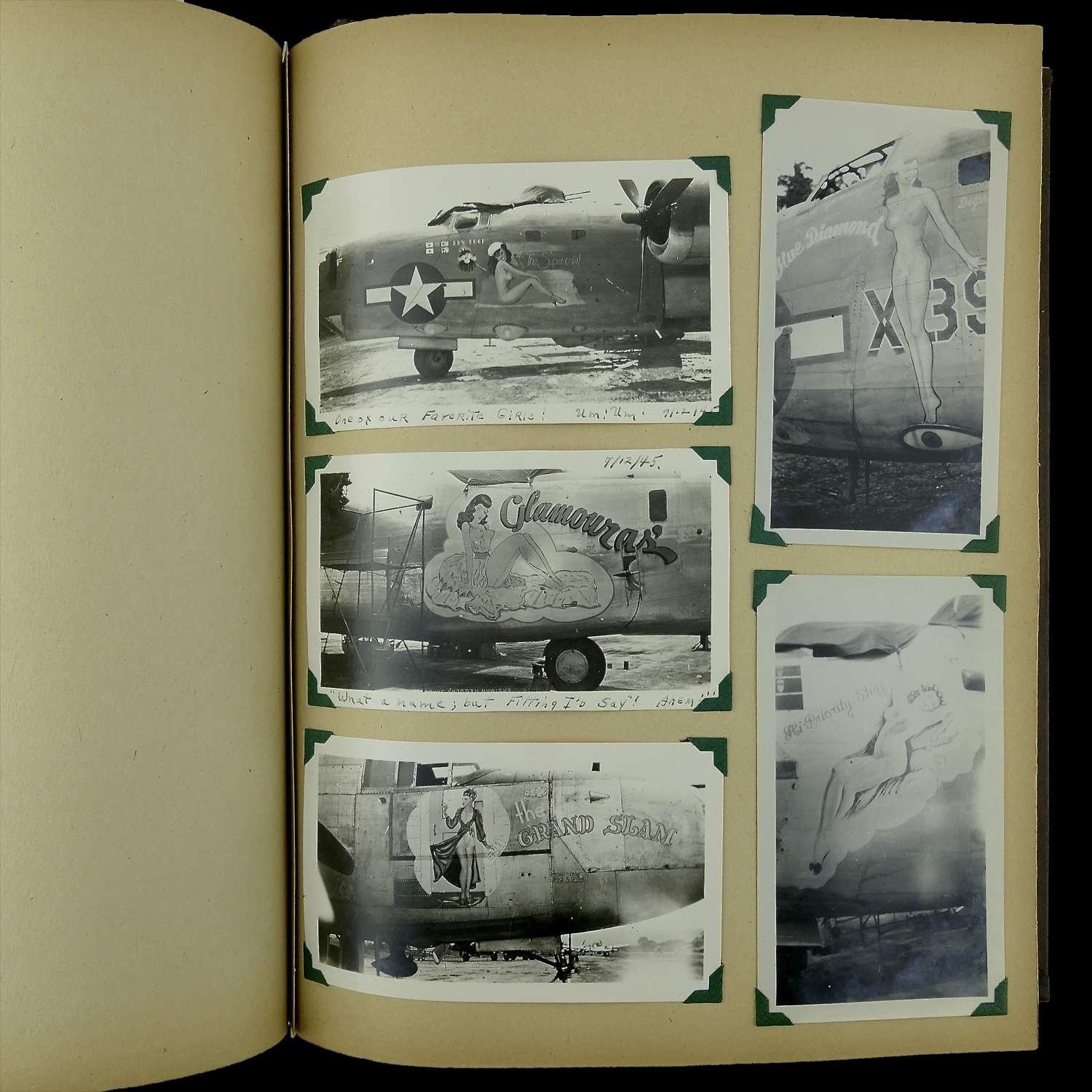 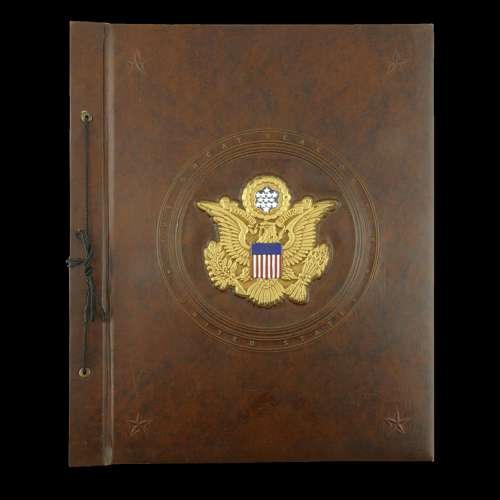 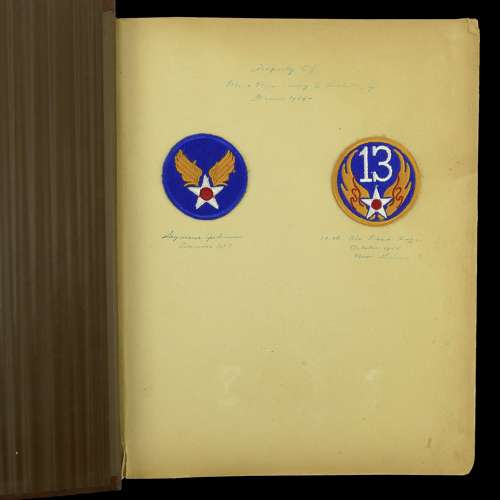 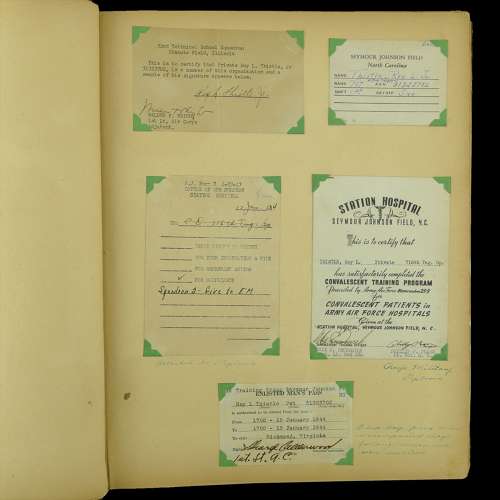 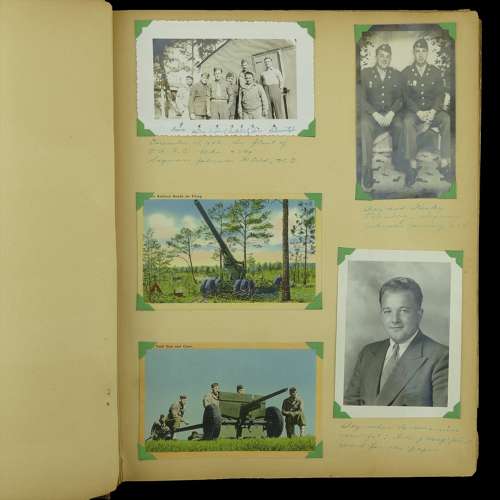 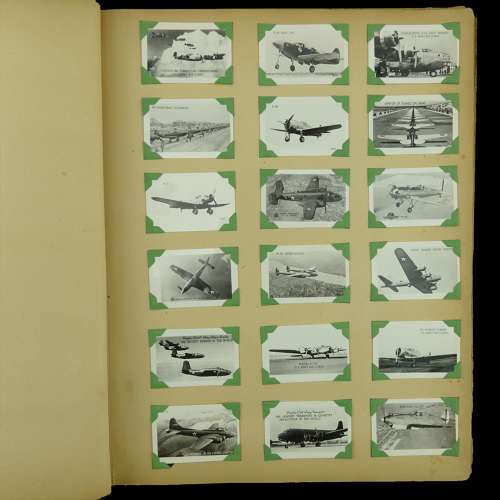 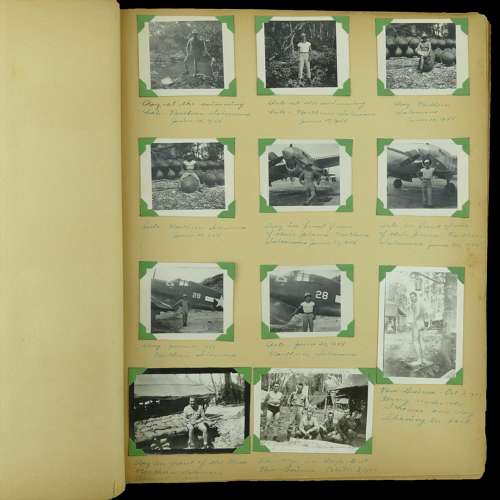 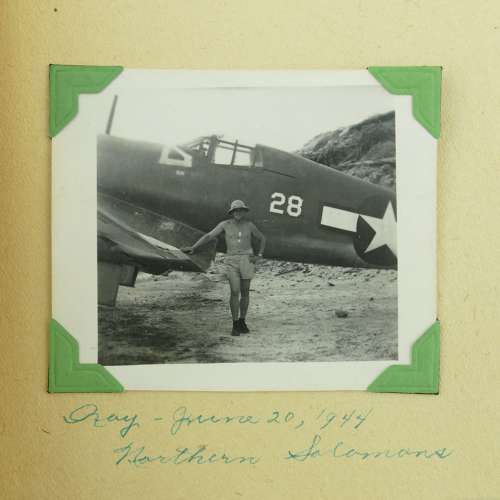 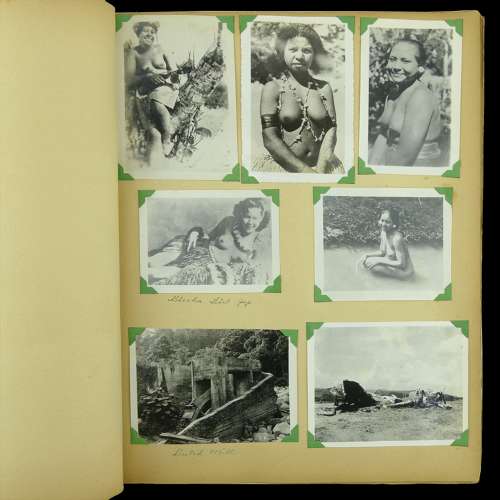 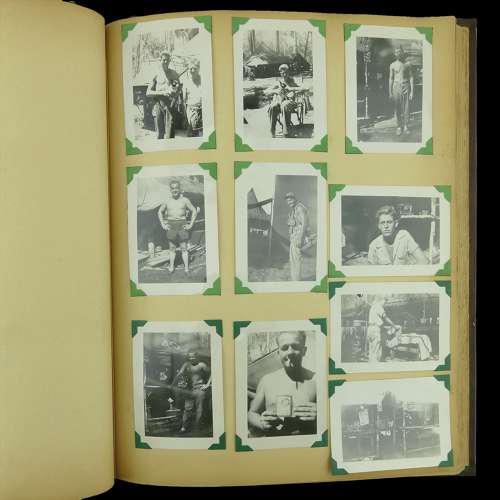 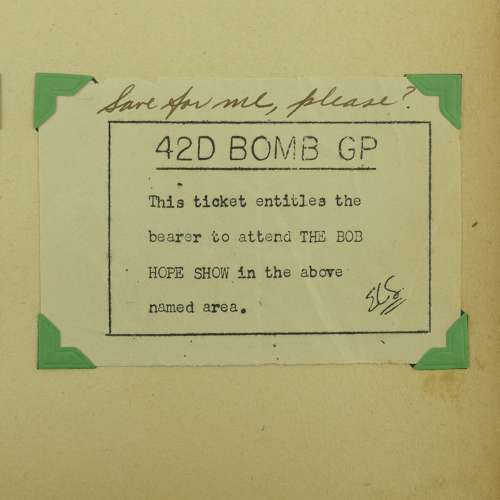 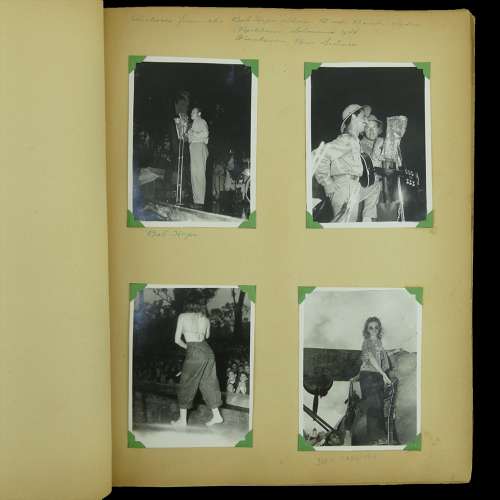 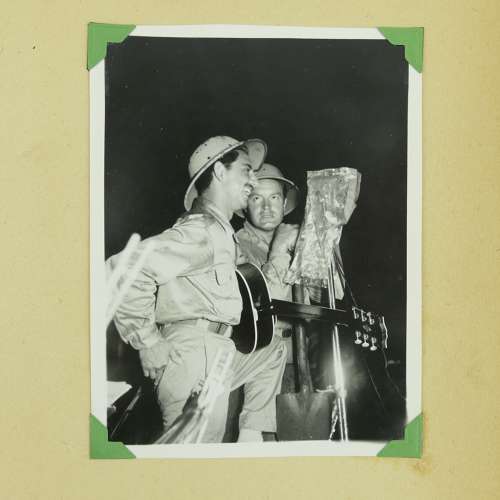 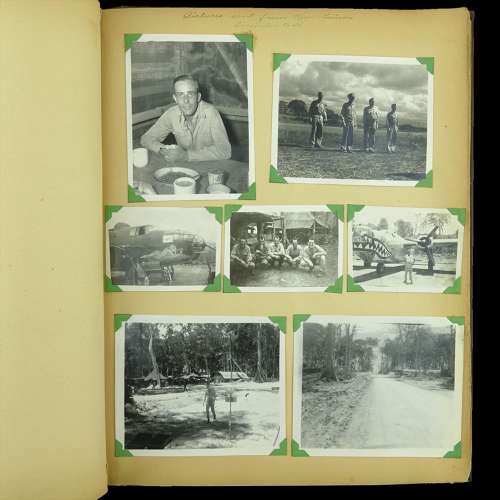 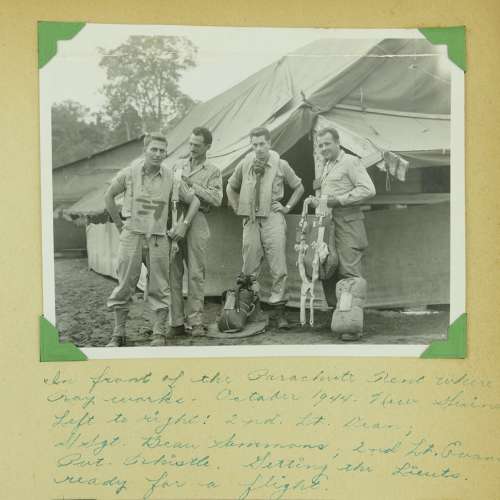 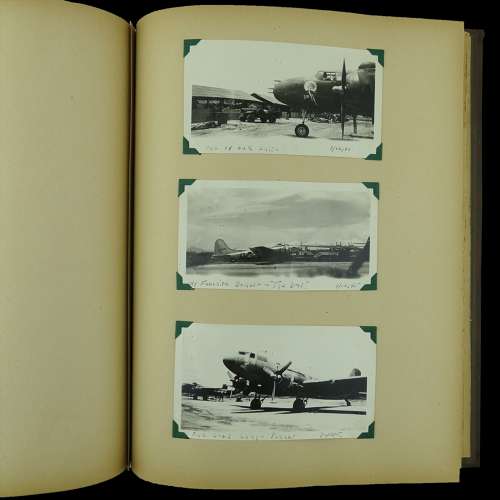 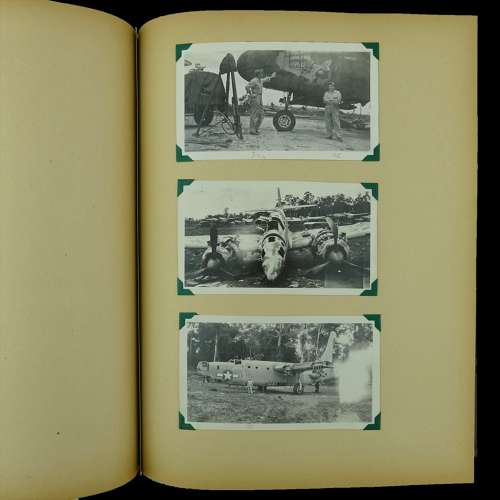 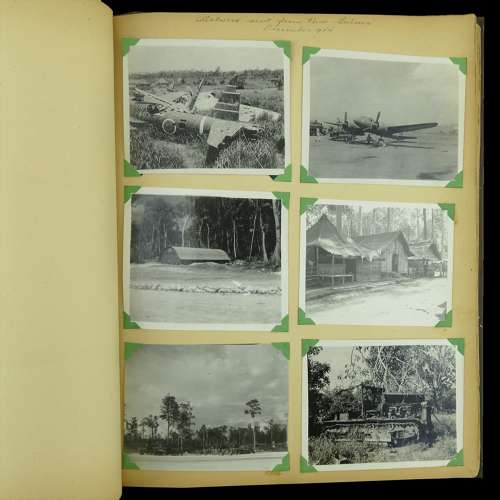 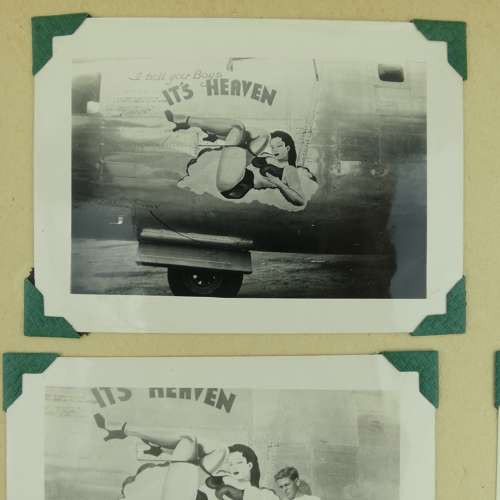 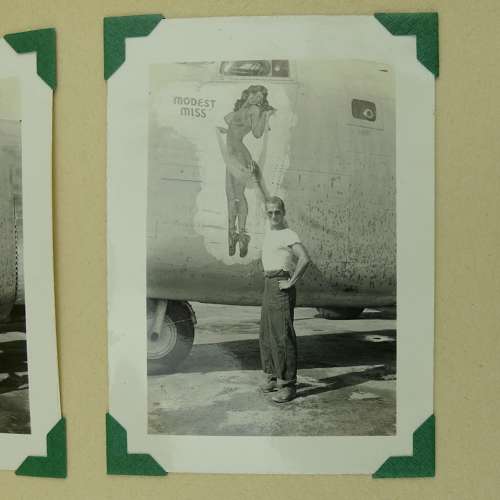 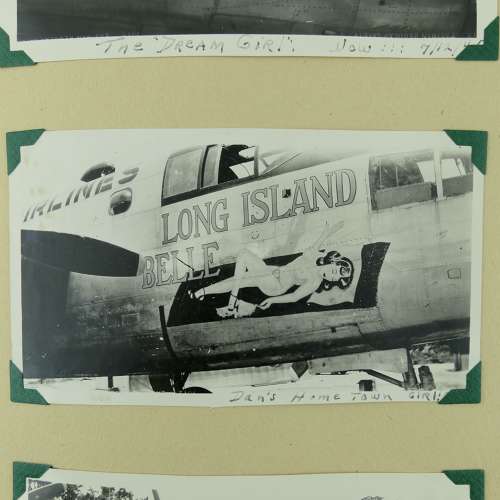 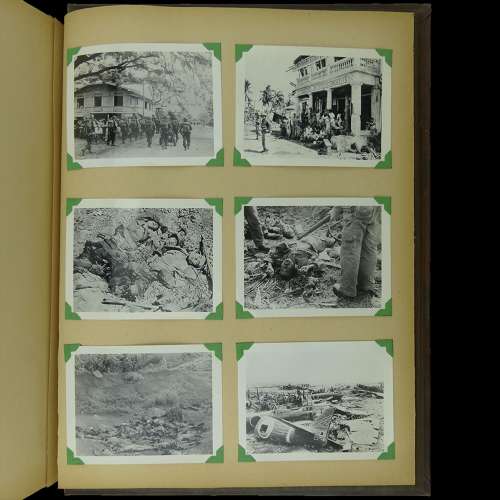 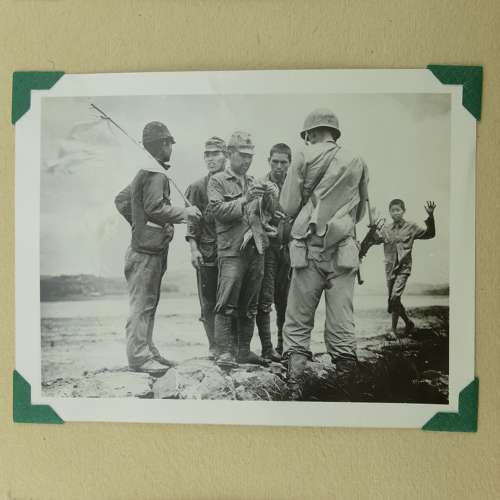 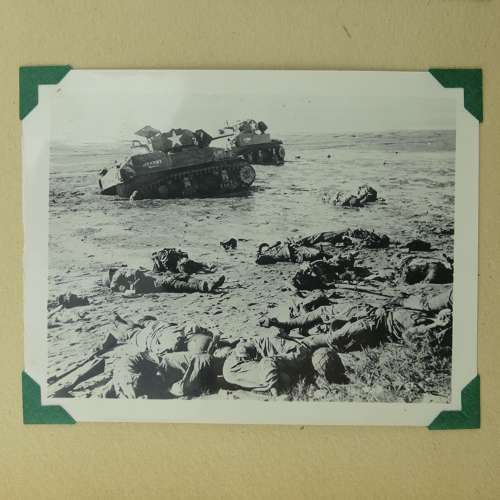 An excellent photograph album / scrap book to Roy Lafayette Thistle Jr. (31323702).  Born in Portland, Maine in 1915, he enlisted in the Air Corps in June 1943, trained at Seymour Johnson Field and served as groundcrew with the 13th AAF in the South Pacific (Solomon Islands and New Guinea) as part of the 42nd Bombardment Group.  They were involved with attacks on Japanese airfields, bases, gun positions and shipping in that area. The album is well annotated throughout and appears to have been compiled by his wife.  It begins with Thistle's AAF and 13th AAF shoulder patches followed by some paperwork relating to his training and wedding.  Photographs and postcards follow plus  a number of small commercially produced aircraft photo cards.  Early in 1944 he is en route for the South Pacific on board Squier-class transport ship USS General J.R. Brooke, arriving during June of the same year.  The album then has numerous images of life around the 42BG's bases.  These include friends, personnel, aircraft, local people, camp buildings etc.  The actor/comedian Bob Hope visited to entertain the troops and there are images of him on stage and others of Julia Frances Newbern-Langford, an American singer and actress known as the 'GI Nightingale'.  Perhaps most notable are some excellent aircraft 'nose-art' photographs including images of 'It's Heaven', 'The Super Chief', Glamouras', 'The Grand Slam', 'Blue Diamond', Hi Priority Stuff', 'Long Island Belle' 'Off We Go', 'Modest Miss' etc.  Other images show crashed/damaged Japanese aircraft/machinery, surrendered Japanese troops, Japanese casualties, American tanks etc.  There are also a couple of pages of Japanese Invasion currency and more with newspaper/magazine clippings relating to the 13th AAF'S campaign in the South Pacific.  Everything is contained in a large embossed faux leather album, approximately 31 x 37cm, virtually all entries are attached via card 'photo corners'.  An excellent insight into Thistle's life, worthy of further research.  Stock code P24215A-234.

Warning : Includes images of topless women and dead bodies which some people may find offensive or distressing.