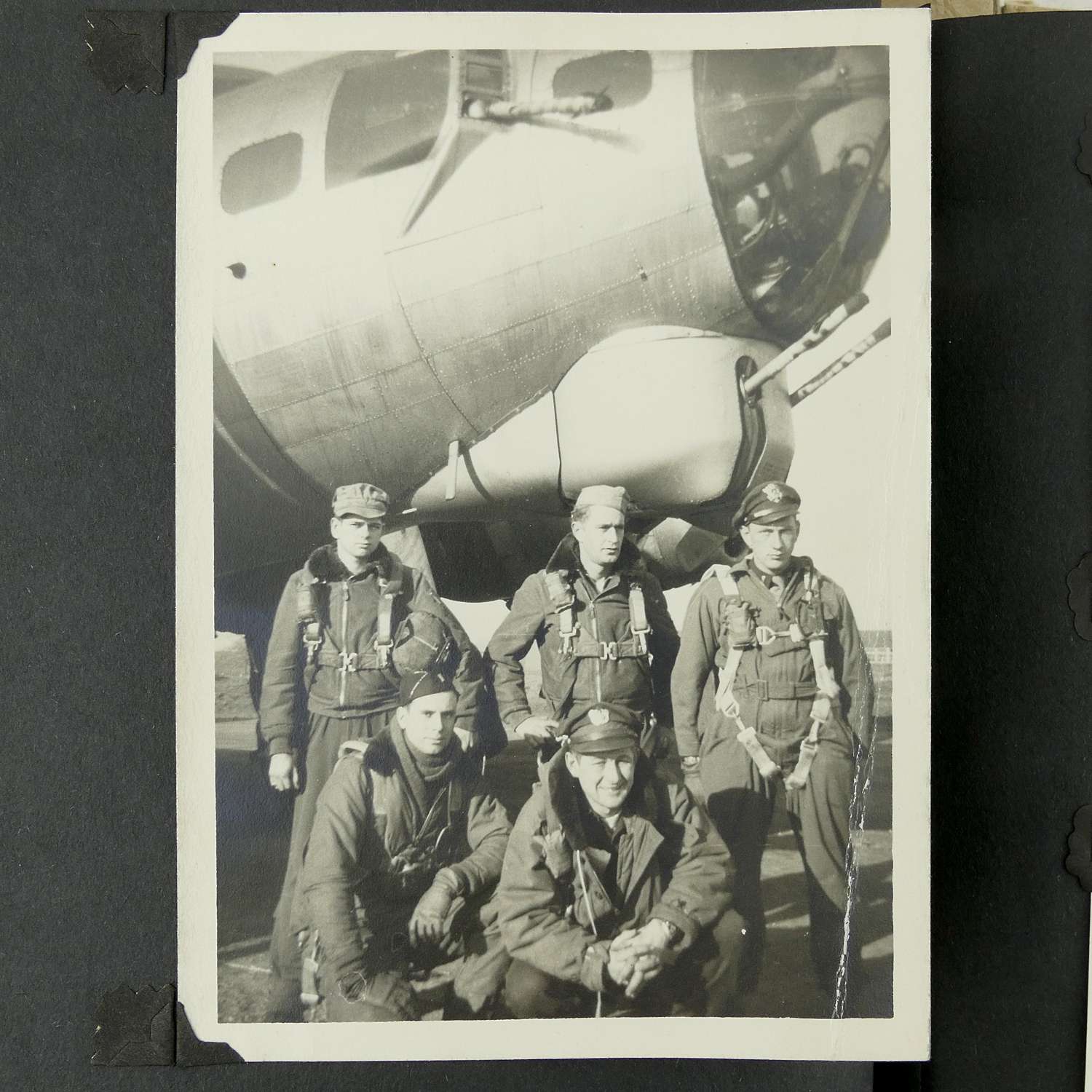 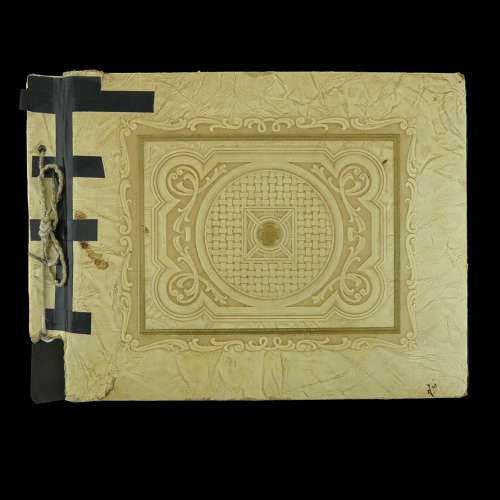 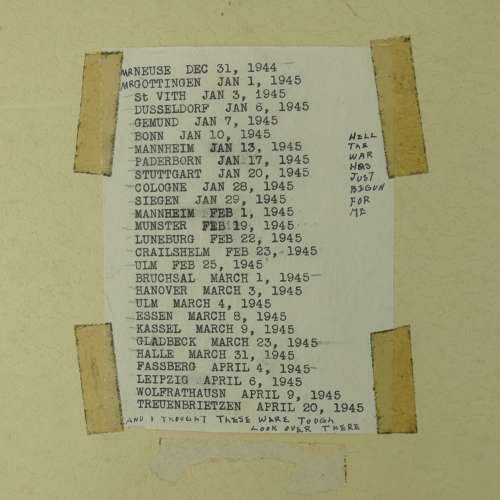 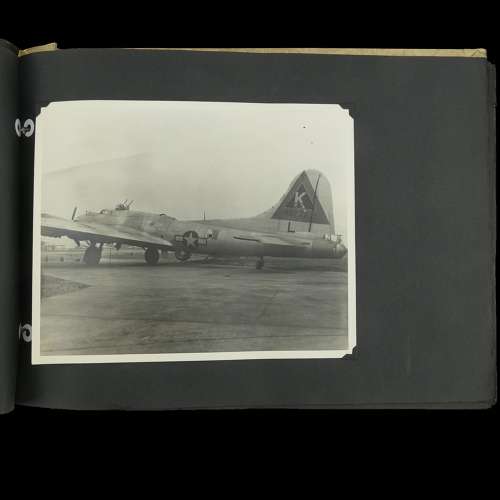 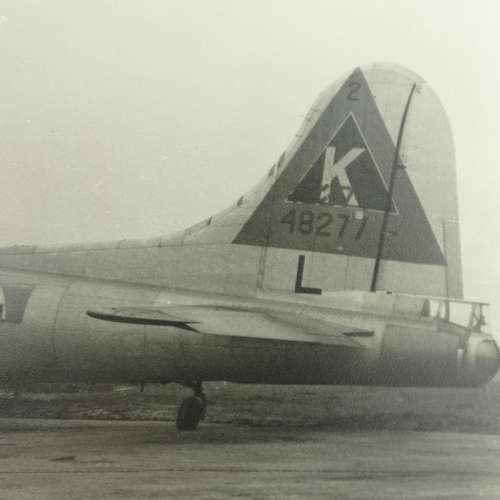 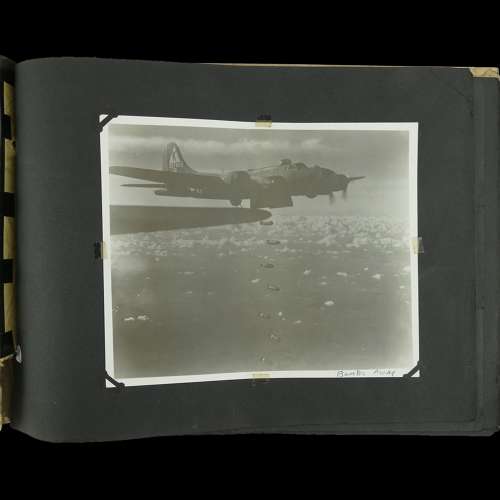 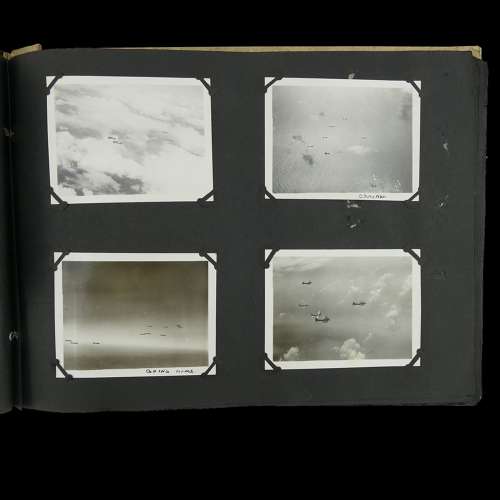 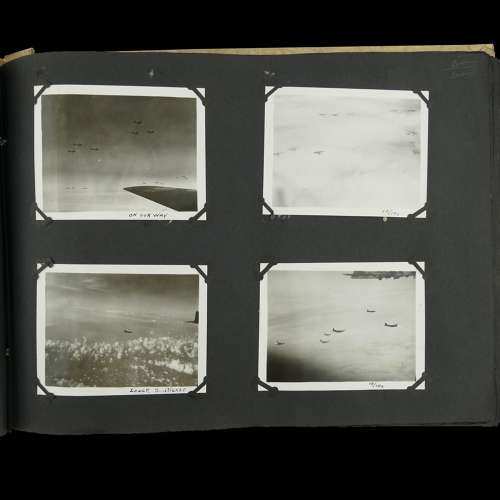 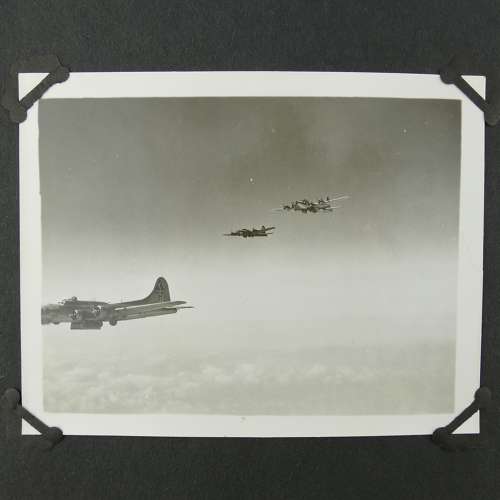 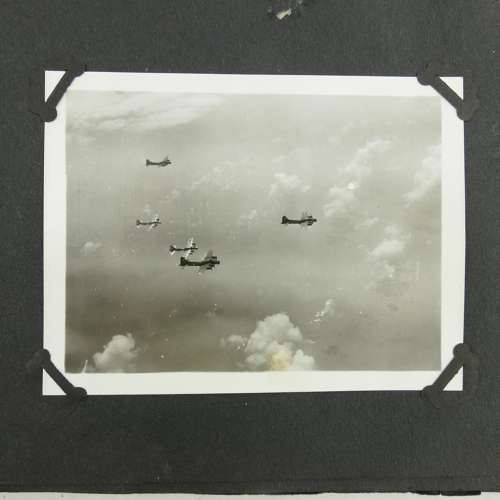 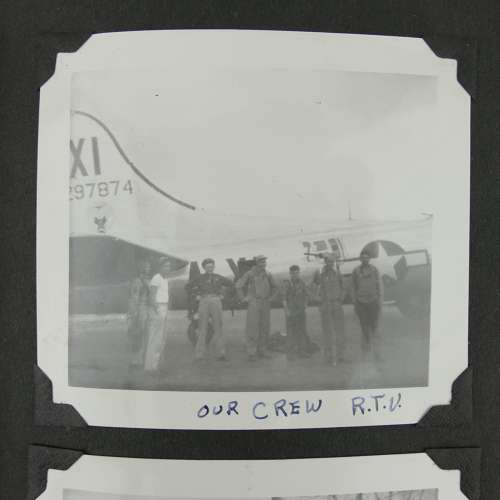 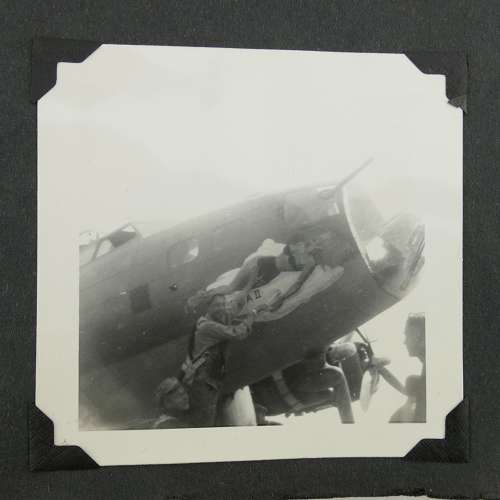 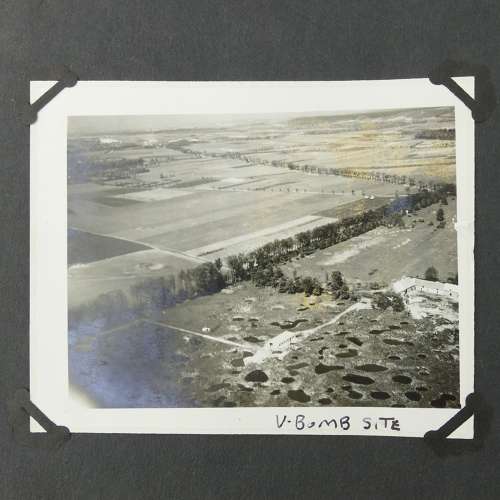 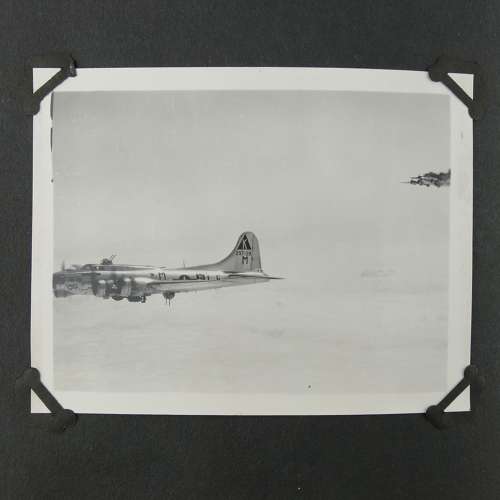 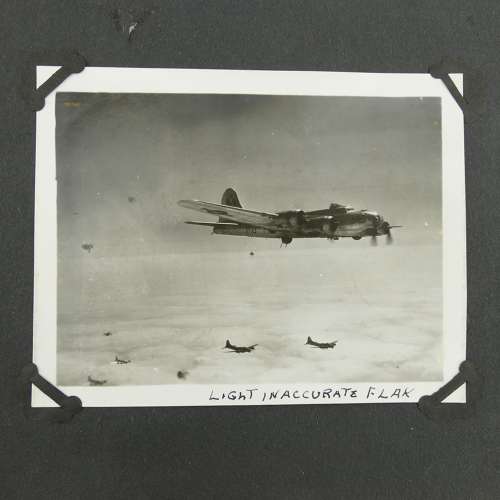 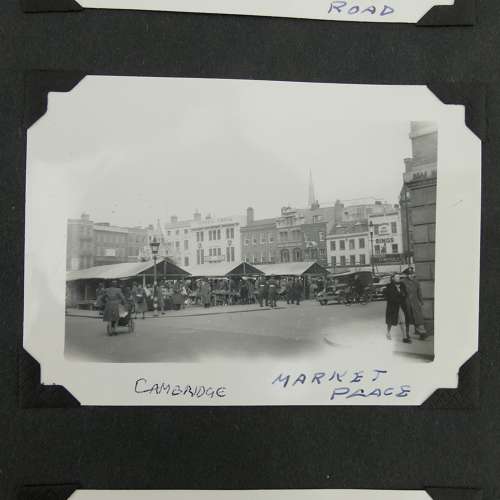 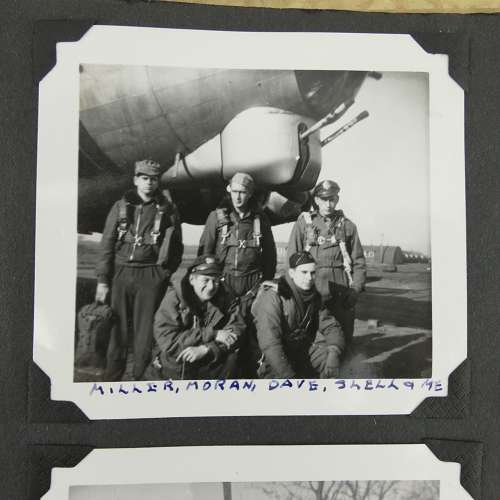 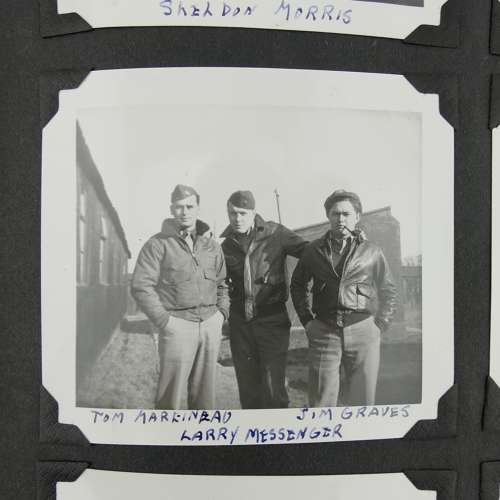 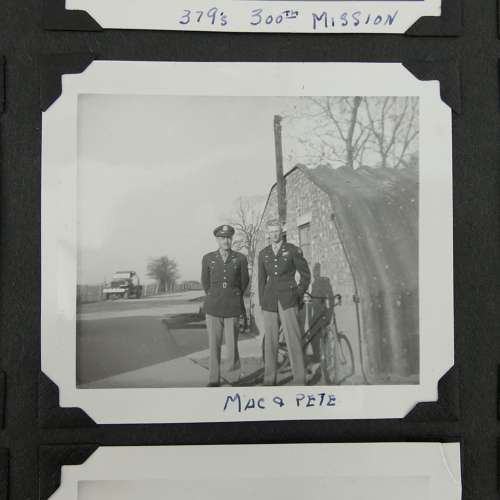 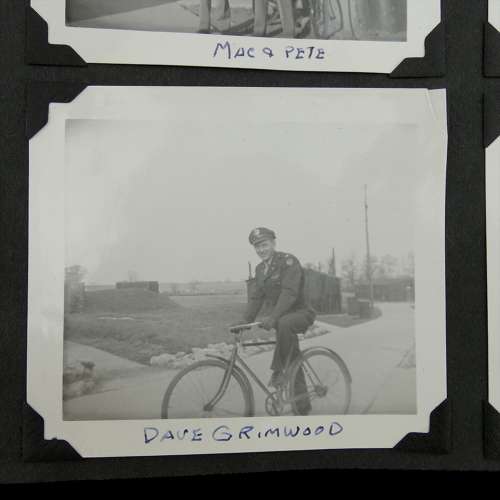 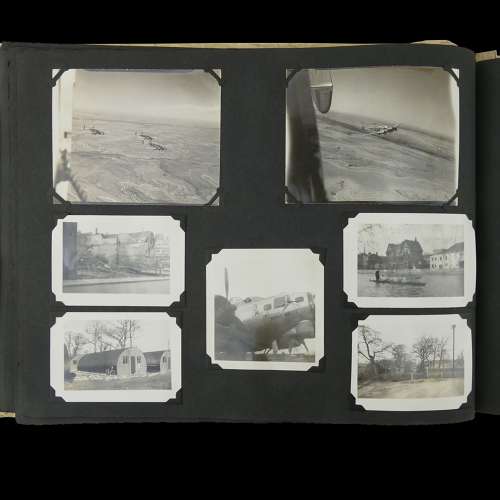 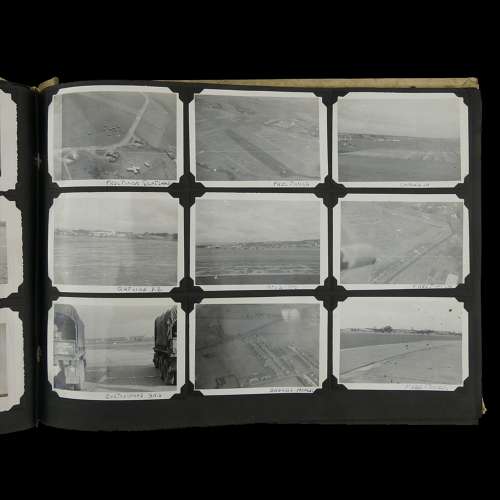 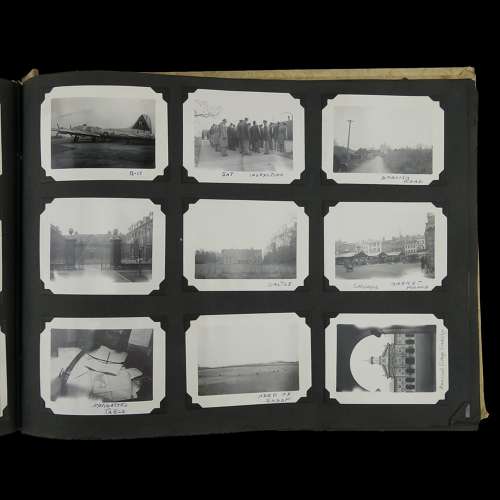 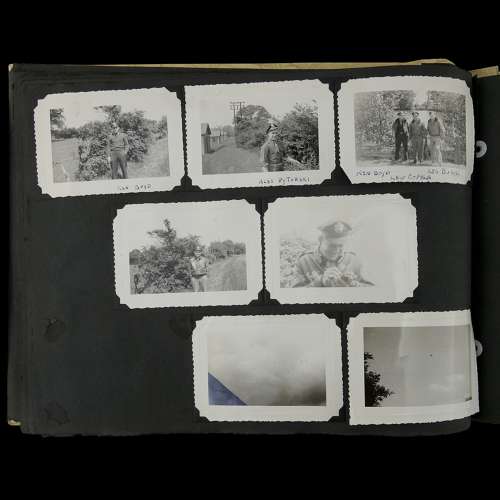 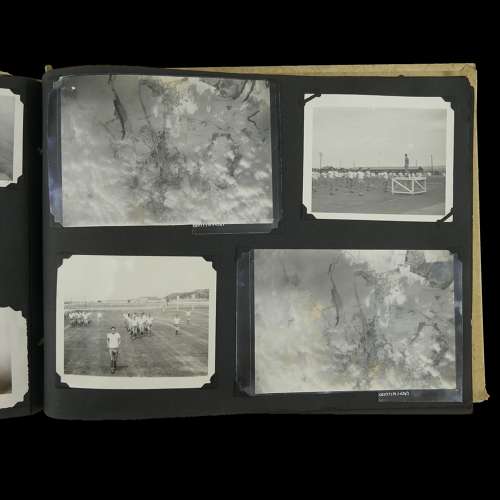 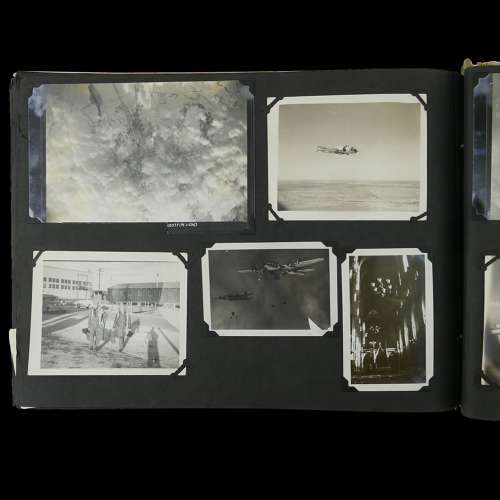 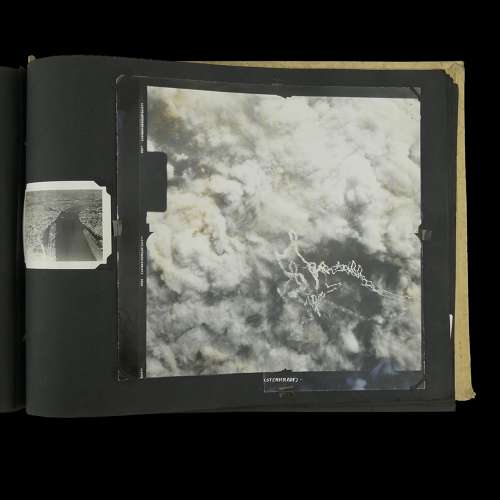 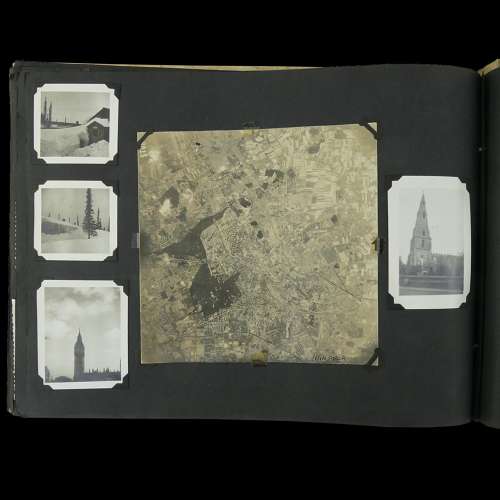 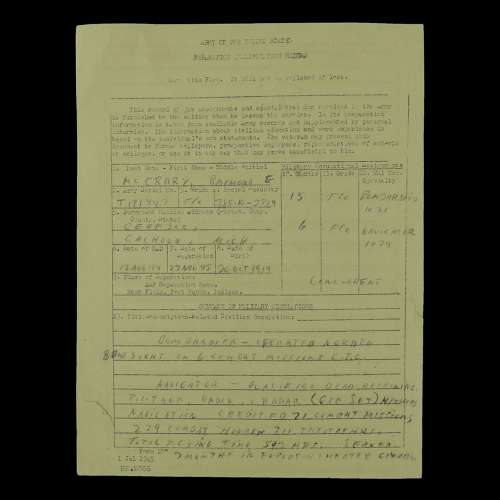 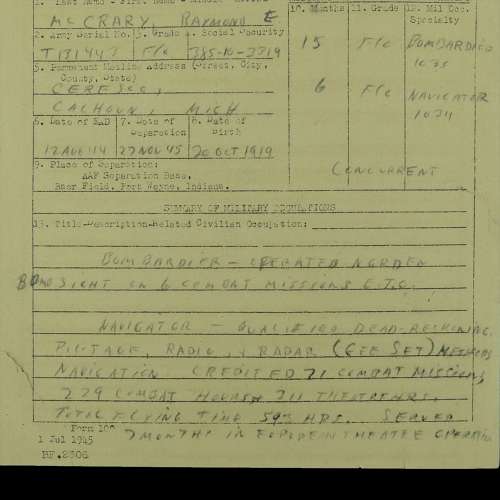 An excellent photograph album to Flight Officer Raymond E. McCrary (T-131443).  Born on 20th October 1919 in Michigan, he worked as an aircraft mechanic before enlisting in the USAAF.  He served in the 525th Bomb Squadron, 379th Bombardment Group, 8th AAF, as an aircrew bombardier on B-17 Flying Fortresses, using the Norden bombsight on 6 combat missions in the European Theatre of Operations.  He also flew as a Navigator on a further 21 combat missions logging 229 combat hours over the course of 7 months based at Kimbolton (AAF station 117), Cambridgeshire.   The album begins with a list of his 27 operation targets including Dusseldorf, Mannheim, Stuttgart, Cologne, Ulm, Essen and Leipzig, all undertaken betwen December 1944 and April 1945.  Large format (24 x 19.5cm) photographs follow, including air to air and ground shots of 525BS aircraft, a couple with clearly visible unit codes.  Next is a 13 x 18cm image of aircrew in flight gear (his crew?) and then 8 pages, 32 air to air photos of B-17s en route / returning from combat missions.  A large 25.5 x 25.5cm target photograph over Bonn (Jan. 10th 1945) is next followed by several pages of varied subjects including a Nissen hut on the base, rowing on the River Cam (?), air to air shots, air to ground photos of Paris, heavily cratered V-bomb targets etc.  The next few pages have numerous photos of friends / fellow aircrew and life around the base.  Further photos show Prestwick & Burtonwood airfields, views around Cambridge etc.  Next are more target and air to air photographs.  Many of the images are captioned and some aircrew named which will help with any research undertaken.  On 6th April 1945 McCrary was part of the crew of B-17 43-39061-H, with nose-art 'Round Twip Wabbit', on a sortie to Leipzig.  En route to the target an electrical malfunction and loss of oil pressure caused the pilot, 1st Lt Sterling Jensen, to feather the propeller.  Once the bombs had been dropped they fell behind the formation and lost radio contact.  They eventually broke out of cloud above a British fighter station and attempted to lower the undercarriage to land.  At this point the Navigator, 2nd Lt. John P. Burke found a heading for an AAF field so the pilot changed course for that.  The US base wasn't located and Jensen eventually landed on an old Luftwaffe fighter field, the aircraft dropping into a sand-filled bomb crater, bending two of the props.  The aircraft was not repairable and the crew were eventually flown back to England.   All photos are contained in a worn (hideous insulating tape repairs), heavily embossed faux leather album, approximately 38.5 x 29cm, virtually all images are attached via card 'photo corners'.  With the album is the airman's 'Separation Qualification Record', a double sided form, filled out in pencil.  A superb insight into McCrary's wartime life, worthy of further research.  Stock code P24215A-235.

N.B. Approximately 164 photos in total with 148 having direct military content.